Professor Ezra Vogel, ‘A Towering Figure in East Asian Studies’ with a ‘Heart of Gold,’ Dies at 90 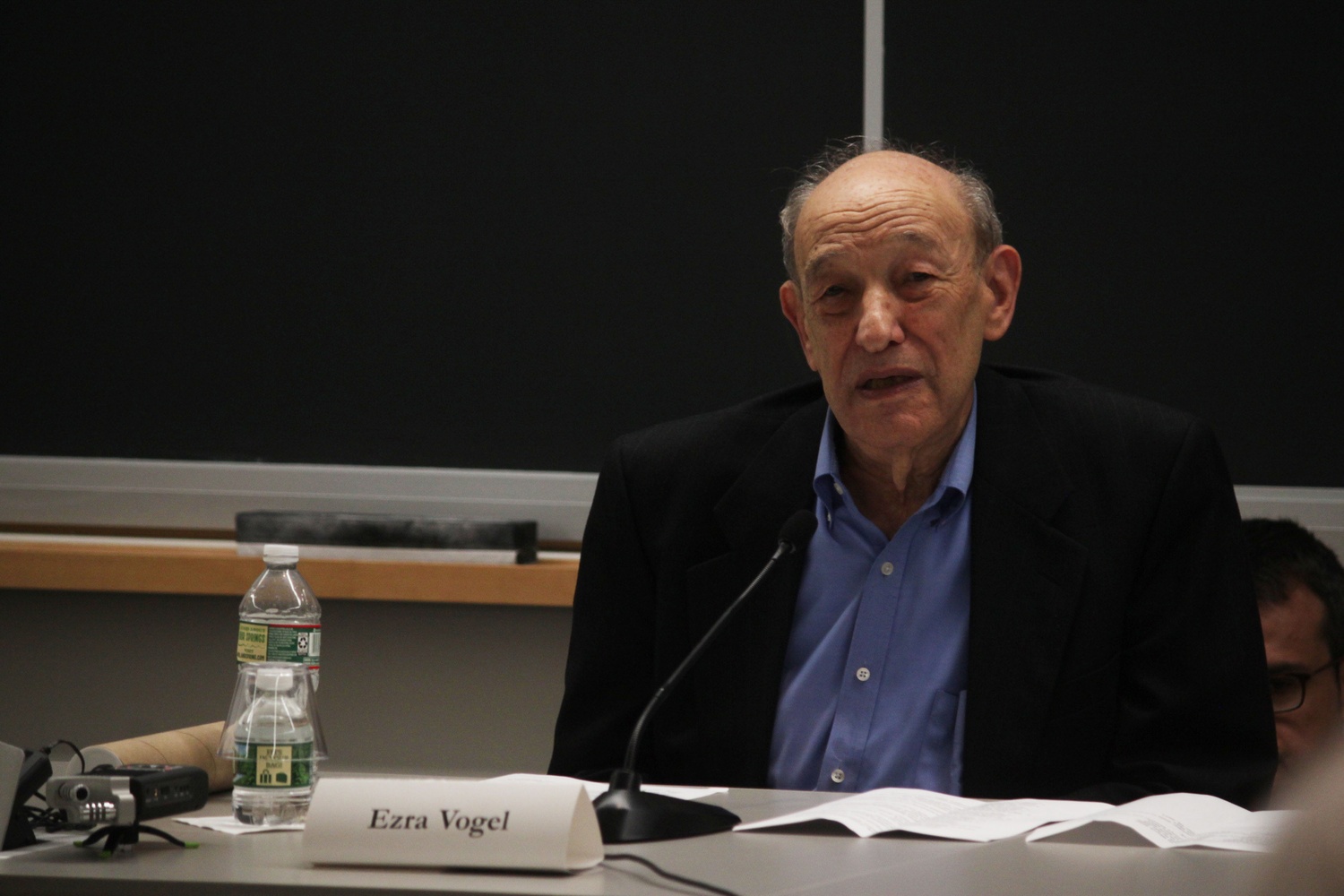 Harvard professor emeritus Ezra F. Vogel died on Dec. 20 at age 90 of complications from cancer surgery. He played a crucial role in creating the East Asian Studies concentration at Harvard in 1972. Vogel, pictured here in 2017. By Casey M. Allen
By Felicia He and Alexandra Topic, Crimson Staff Writers

With a dedication to scholarship and an innate ability to connect with others, Harvard professor emeritus Ezra F. Vogel will be remembered for not just “how many books he wrote, but how many people he touched,” his son, Steven K. Vogel, said.

Vogel, who served as Henry Ford II Professor of the Social Sciences, Emeritus, and was described by his colleagues as a visionary in East Asian studies, died on Dec. 20 at age 90 of complications from cancer surgery.

His work, centered around East Asia, spanned a wide range of disciplines from sociology to political science and, in later years, history. Above all, he exhibited unfailing humility and what Harvard Fairbank Center for Chinese Studies research associate Sabina Knight described as a “heart of gold.”

Vogel’s years at Harvard began with his Ph.D. in 1958 and his return as a postdoctoral fellow in 1961. He served as a professor from 1967 until his retirement in 2000. During those four decades, he founded and directed several centers focused on the study of contemporary Asia, in addition to pioneering the undergraduate concentration in East Asian Studies.

Beyond Harvard's gates, Vogel garnered worldwide respect for his bestselling books on Japan and China, such as the 1979 “Japan as Number One: Lessons for America” and the 2011 “Deng Xiaoping and the Transformation of China.”

He will be equally remembered for his warmth and modesty as his academic accomplishments, colleagues and students said.

“That's the unique aspect of Ezra, as a human being,” said School of Public Health professor emeritus William Hsiao. “Often a person with a very sharp intellect will not respect everyone they meet.”

‘A Third Degree of Energy and Devotion’

Vogel was born in 1930 to Jewish immigrants in Delaware, Ohio. He remained in the state until his graduation from Ohio Wesleyan University in 1950, where he studied sociology and anthropology.

After serving two years in the Army, Vogel graduated with a Ph.D. in sociology from Harvard in 1958. He was appointed as a lecturer at Harvard in 1964, and later became a tenured professor.

“He seemed to have a third degree of energy and devotion that was beyond the normal,” Vogel's former student and current Kennedy School Senior Research Fellow William H. Overholt ’68 wrote in an email. “He was attentive to people and followed them for years and years. That’s just not the normal college experience.”

“Scanning and the internet didn’t even remotely exist, but he managed to prepare a course pack on his own,” Gordon said. “He collected about 30 or 40 English language articles from various obscure magazines or journals and put them into a pack and then had it all Xerox copied and prepared into a booklet.”

Beyond his commitment to teaching, Vogel helped shape Harvard as an institution.

In the early 1970s, the East Asian Languages and Civilizations concentration largely focused on the humanities. Vogel was “instrumental” in creating the East Asian Studies concentration in 1972 for students who wanted to study contemporary China or Japan, according to Professor of Chinese History Michael A. Szonyi, who now directs the Fairbank Center.

Vogel served as chairman of the concentration from its creation until 1991 and eventually led its merger with East Asian Languages and Civilizations in 1990. He continued to cultivate it even after he retired, Szonyi said.

“I became the director of undergraduate studies for that concentration in around 2010 or so, and Ezra – who had by this time retired from Harvard, was one of the leading experts, and had written his award-winning book – called me up and said we needed to have lunch so that we could talk about the concentration,” Szonyi recalled. “It’s just a further example of how genuine the man was.”

As director from 1972 to 1977 and again from 1995 until 1999, Vogel built up Harvard's Fairbank Center to become a leading interdisciplinary center for the study of China. He also served as founding Director of the Program on U.S.-Japan Relations from 1980 to 1987 and established Harvard’s Asia Center, serving as its director from 1997 to 1999.

Despite his sizable obligations and importance, he was a generous mentor and source of support for his students.

Government professor Christina L. Davis ’93 remembered that Vogel — who she called a “towering figure” in East Asian studies — would invite undergraduates to his house to talk about their senior thesis research.

“He would reach out and show interest in our research, our ideas — even when he was a world famous scholar — and that was really very powerful,” said Davis, who now directs Harvard’s Program on U.S.-Japan Relations.

“That’s what Ezra was like,” she added. “He was always looking for ways to help people out.”

Vogel’s reach as a mentor extended wide, with Overholt recalling the “hundreds” of guests at his retirement gala celebration.

“Harvard’s then-President Derek Bok said he had never seen anything like this outpouring,” Overholt wrote.

Vogel remained an important figure at Harvard even after his retirement.

“Until the pandemic struck, he was hosting dinners a couple of times a week for the community, for visiting scholars, for visiting speakers,” Szonyi said.

Still, the coronavirus pandemic did not deter Vogel from his active retirement. He continued to present events remotely, such as a November discussion on East Asia’s reaction to the U.S. election.

“There aren’t very many people who at age 90 would happily transfer their expertise to a Zoom seminar,” Davis said. “He was just wonderful.”

After receiving his Ph.D. at Harvard, Vogel traveled to Japan in 1958 with his first wife, Suzanne H. Vogel, to conduct immersive ethnographic research for his first book, “Japan’s New Middle Class,” which was published in 1963.

Steven Vogel — now a professor of East Asian politics at the University of California, Berkeley — said his parents “embedded themselves into a particular suburb of Tokyo for a year and interviewed six families very intensively almost every week for a year.”

Ezra Vogel employed the same level of meticulousness when working on his first book on China, the 1969 “Canton under Communism.” For that book, he traveled to Hong Kong to learn the language and interview refugees and sinologists — at a time when American citizens were barred from mainland China. Vogel’s emphasis on interviews in his research was remembered by colleagues like Knight, who called him “a consummate listener.”

Szonyi said Vogel was a strong supporter of mastering language to understand the perspectives of the people he met.

“Both his Chinese and his Japanese were excellent,” Szonyi said.

“There’s this idea he used to tell me,” she said. “‘Find what makes your data sing. Don’t come in with a predisposition.’”

Vogel’s emphasis on the personal, per his colleagues, came through in his 2011 biography of former Chinese leader Deng Xiaoping, which combined criticism with optimism.

“[Vogel] wanted to talk about the transformation of China and how they brought millions of people out of poverty,” Knight said. “He decided that sort of the best way to tell that story was around a person.”

Hsiao and Overholt both recalled the conscientious decision-making and personal modesty evident in Vogel’s decision to sign over the royalties of his Deng biography to his alma mater, Ohio Wesleyan. He did so before the work was published so the motivation behind his writings would not be questioned, Hsiao said.

Vogel had a unique ability to gain respect from both American and foreign audiences, which he leveraged to play an informal role in international diplomacy.

“At the time of the greatest Sino-Japanese antagonism over interpretations of World War II history, he was able to bring leading Chinese and Japanese scholars together in dialogue,” Overholt wrote.

Szonyi said bridging the divide would have been “politically impossible” in China and Japan, so Vogel brought them all to Harvard’s campus.

Vogel wrote his last book, “China and Japan: Facing History,” published in 2019, in hopes of reviving cooperation and relieving tensions between the two countries.

Vogel held stature even in the eyes of the average person in East Asia. Per Szonyi, Vogel was a “household name” in China and Japan. Still, his wide acclaim made no dent on his unwavering modesty, per colleagues.

Much of his influence on policy was done quietly, but still powerfully. Vogel served as East Asia Officer on the National Intelligence Council from 1993 to 1995 during the Clinton administration, but, as Overholt wrote, he was much more comfortable “without a title.”

White, Vogel’s former graduate student and colleague, added that her former professor “didn’t feel like any of the mythologies of Harvard.”

“Wherever we were, Ezra was always sitting cross-legged on the floor,” she said. “He did not elevate himself in any way.”

Steven Vogel said he looked up to his father’s ability to “bring people at ease” in the cutthroat world of Harvard academics.

“Harvard can be a tough place for faculty or for students because the expectations are so high,” he said. “What I admire about him is he was able to pierce all of that and be very human within that context.”

Fundamentally, Ezra Vogel was an optimist.

“He always had a really long-term historical view, and part of what enabled him to do that was to be optimistic,” Knight said. “To see that things would get worse, and then they’d get better.”

That optimism is found not only in his research, but also in his daily interactions with people. Knight recalled his response, early on in their acquaintance, to her telling him that she lost family in the Holocaust.

“Thinking about these losses always made me sad, but Ezra was upbeat about it,” she said. “He told me that legacy meant that I would do my best not to let such horrors reoccur. I never thought about my family history the same way again.”

This optimism – what Knight referred to as a “rare gift” – was echoed by colleagues like Gordon.

Overholt wrote that it is “imperative” that those who knew Vogel’s immense contributions to the field ensure he is remembered.

“It’s too bad we don’t have a monument to him,” Overholt added. “We need one.”