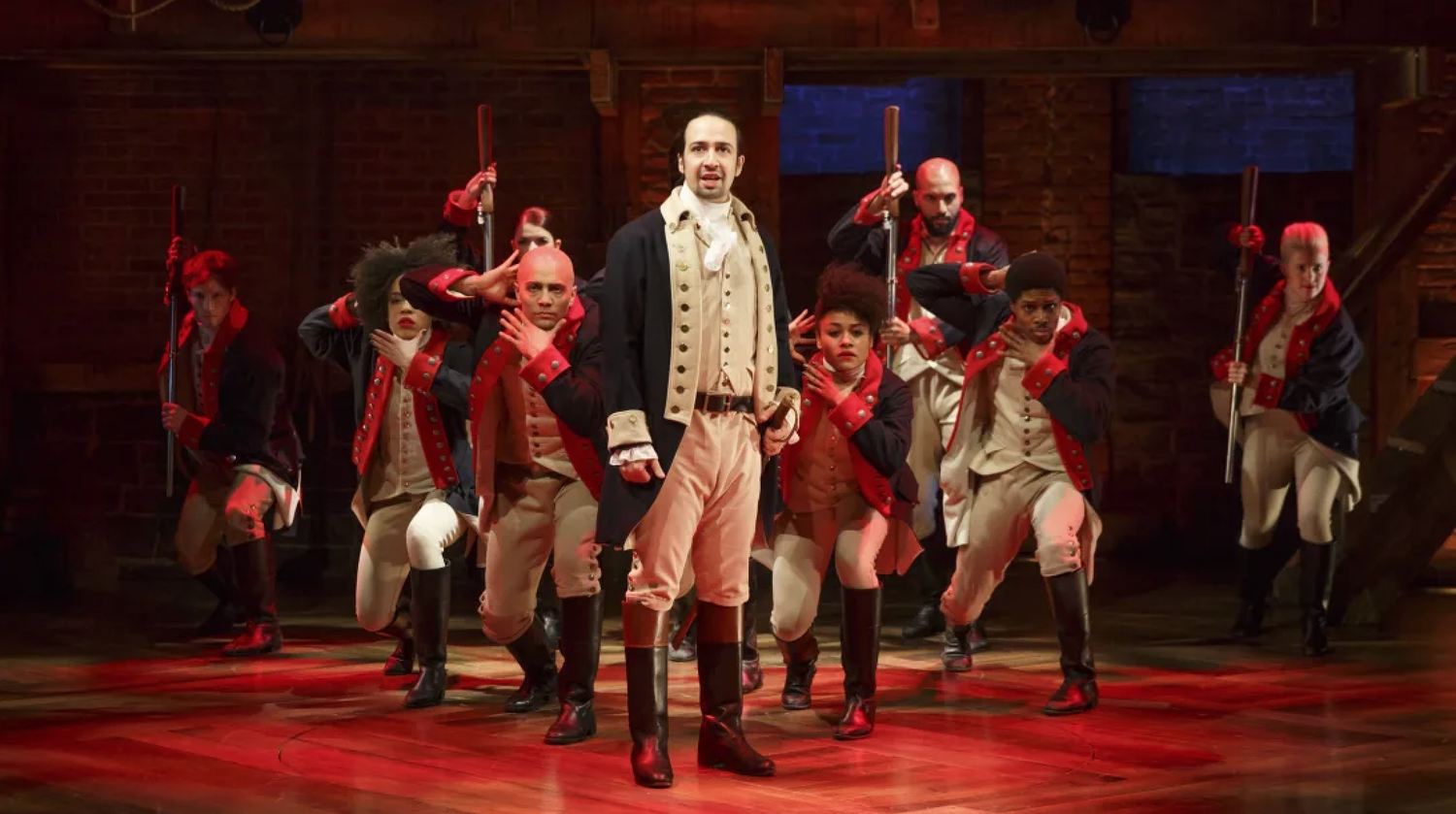 You’d be hard-pressed to encounter someone who isn’t familiar with “Hamilton,” Lin-Manuel Miranda’s critically acclaimed musical about United States founding father Alexander Hamilton. A Broadway production deemed so sensational that a full recording of the original cast’s performance was released on Disney+, “Hamilton'' is a cultural phenomenon that challenges the ubiquity of whitewashing in American theater by selecting BIPOC (Black, Indigenous, People of Color) actors to play white historical figures. But the progressiveness reflected in this racial diversity, which fans and critics alike celebrate, is also a source of controversy. Is “Hamilton'' really that innovative if it fundamentally engages in an absurd form of racism known as color-blind casting?

A similar question arose last month when it was revealed Black actress Jodie Turner-Smith would portray Anne Boleyn, Queen of England from 1533 to 1536, in a three-part Channel 5 series. Unsurprisingly, this news was met with varied responses. Some expressed their anger about a Black woman playing a white historical figure while others remarked on their desire to see Black actors in new narratives created by, for, and about people of color.

Recent examples of color-blind casting — casting that does not take race or ethnicity into account — reveal the complexities that develop when exclusion and rejection of authenticity are disguised as an egalitarian artistic convention. Its problematic, if not racist, nature is mostly overt — e.g. white actresses Scarlett Johansson and Emma Stone playing characters of Asian descent — but it can be covert, as is the case with “Hamilton” and Turner-Smith’s upcoming Channel 5 series.

The perils of color-blind casting in “Hamilton'' are especially difficult to detect. For one, many consider it an example of color-conscious casting rather than color-blind casting. The latter is a practice rejecting the past and present in favor of an idealized post-racial future which it is desperate to symbolize. On the contrary, the former is cemented in the present and examines race and ethnicity during the audition process. Lin-Manuel Miranda, director Thomas Kail, and casting directors Bethany Knox and Bernie Telsey did exactly this by choosing to only cast white actors in one key part and a few small ensemble roles. In essence, they otherwise barred the actors from the cast to make room for artists of color. (The casting call for the Chicago production of “Hamilton” specified “non-white” for all but one of the major roles.)

Yet, reserving space for BIPOC performers is only one element of a successful color-conscious approach. Effective color-conscious casting places greater responsibility on the writer, director, and casting directors to execute an in-depth evaluation of the cultural connotations of requesting an actor insert themselves into a narrative that is not their own. Ideally, they will ensure marginalized actors are not burdened by their racial transcendence and, if need be, adapt the production to better suit their needs and perspectives.

Miranda’s show does not align with those principles. Although the ‘woke’ composer and lyricist prioritizes diversifying his production, he blindly asks BIPOC performers to act in a piece detailing historical events benefiting their oppressors. These roles diverge to a significant degree from the actors’ own rich familial and ancestral histories, which are just as worthy of sharing with the world as Alexander Hamilton’s is. Curiously, the change in race does not lead to a shift in the characters’ viewpoints and experiences, even if Black artists are personating slave owners or individuals related to them. Predominantly white audiences’ tendency to overlook this discrepancy between the complexion of the actor and the historical context of their role is reflective of what, among other factors, has allowed color-blind casting to persist for so long — the unquestioning acceptance of superficial diversity and inclusivity.

“Hamilton” may be a revolutionary Black, brown, and multicolored agent of change on the outside, but it is a mainstream white history lesson on the inside: a history lesson taught through fantastic music, entrancing choreography, nuanced acting, and terrific set design. It is crucial, then, to separate how the show is brought to life artistically from who brings the show to life and why. “Hamilton”’s method of conveying history is problematic but it nevertheless redefines the boundaries of theater by foregrounding innovation, hip-hop, and BIPOC talent.

This duality is evident in other facets of the work. Despite taking race and ethnicity into account during the initial stages of production, the musical ultimately subscribes to the same racist notion characterizing color-blind casting. Co-occurring with inventive rap sequences and punchy dance numbers is the inadvertent implication that it is reasonable to not see race as well as its influence on the lens through which a story is viewed.

Given “Hamilton’s” duality, it may be more appropriate to understand Manuel-Miranda, Kail, Knox, and Telsey’s casting techniques as an enigmatic hybrid of color-blindness and color-consciousness. Indeed, the subtle distinction renders it nearly impossible to determine whether the external merits of “Hamilton” overpower its internal demerits.

That isn’t to say clear stances for or against color-blind casting haven’t been established in years past. Black American playwright August Wilson presents a preeminent argument against color-blind casting in “The Ground on Which I Stand,” an address that he delivered at the 1996 TCG (Theatre Communications Group) Conference. “The idea of colorblind casting,” he stated, “is the same idea of assimilation that black Americans have been rejecting for the past 380 years." It is an “attempt to blot [racial and ethnic minorities] out” and “reinvent history," he said. It is an “assault on [the BIPOC] presence…an insult to [their] intelligence…and [their] many and varied contributions to the society and world at large.” According to Wilson, “mount[ing] an [all-BIPOC] production” of a play or musical “conceived for white actors as an investigation of the human condition through the specifics of white culture is to deny [the actors their] own humanity, [their] own history, and the need to make [their] own investigations from the cultural ground on which [they] stand."

Of course, the cultural ground on which Wilson stood in 1996 is far different from the one audiences stand on in 2020. Still, the racist sentiment expressed by color-blind casting remains an issue. With the exception of productions such as “Hamilton,” which cannot be precisely described as color-blind or color-conscious, all color-blind castings are questionable and should be avoided, specifically when they cast a white person to play a BIPOC character.

Any moment a white actor adopts the role of a person of color and vice-versa, there is an underlying suggestion all humans navigate their surrounding environments in the same manner. Race and ethnicity are minimized and reduced to negligible factors that can be transferred from person to person. In reality, one’s racial identity is an inalienable entity paramount to how they perceive themselves and are received by others. This has long gone ignored in all mediums of production: Natalie Wood, an actress of Russian descent, played Maria, the Puerto Rican lead in “West Side Story”; until recently, “The Simpsons” featured white actors voicing Black and South Asian characters; and Jonathan Pryce wore prosthetics to transform into a Eurasian nightclub owner in the original West End performance of “Miss Saigon.” All three scenarios mark instances where white actors are thrust into the limelight for appropriating an unfamiliar culture and lifestyle.

Those who deny the whitewashing prompted by color-blind casting may reinforce their convictions by contending that an actor’s role is to assume identities different from their own, even in terms of race. After all, one of the key tenets of the art form is what poet and aesthetic philosopher Samuel Taylor Coleridge coined as “the willing suspension of disbelief.” Audience members are expected to submit to the world of the production, no matter how unrealistic it may be. Yet, it hardly seems appropriate to equate matters of racial identity with, say, a willing suspension of disbelief required to watch a man turn into a scarecrow in “The Wizard of Oz."

How, then, should writers, directors, casting directors, producers, and executives account for the rising demand to see non-white faces on the stage and the screen? First, they must consider, rather than ignore, ethnic background and race. It is essential to many individuals' selfhood and there is a necessity for it to be treated as such. Second, they must realize that blindness is not representation — consciousness is. The replacement of color-blind approaches with color-conscious methodologies is indispensable.

It is not enough, however, to be merely aware of the BIPOC bodies present in film, television, and theatre — it is imperative to identify and challenge the prejudices and stereotypes white audiences have attached, and continue to attach, to these bodies. Moreover, those possessing creative and management responsibility for productions must discern the socio-political and cultural implications of the on-screen, on-stage existence of bodies of color. “Hamilton’s” inability to do so should serve as a clarion call to artists in power to clarify the standards of constructive casting strategies and reimagine the possibilities for change when there is a collective adoption of color-conscious mentality.

Finally, and perhaps most importantly, there is an exigency for writers, directors, casting directors, producers, and executives to admit that neither color-blind nor color-conscious casting can function as an alternative to the global distribution of stories brought to fruition by BIPOC creative teams for BIPOC audiences. Hollywood and Broadway must take accountability for their past casting failures and accordingly, prioritize implementing sustained institutional change and not temporary solutions.

No excuses should be tolerated; there is an abundance of BIPOC artists who are equally capable, skilled, and accomplished as their white colleagues who are able to claim BIPOC roles using their white privilege. Regardless of concerns surrounding profitability and international reception, the efforts to decolonize show business should not cease until at least half of the movies, television series, plays, and musicals released in a year feature BIPOC actors performing principal roles that realistically depict the full spectrum of experiences unique to their ethnic and racial communities.

As August Wilson declared in 1996, “We do not need colorblind casting." What American film, television, and theatre need instead is a wide-scale redistribution of space. For far too long, white narratives have crowded the pages of screenplays and scripts, leaving little room for the development of stories amplifying the voices of racial minorities. In most situations, BIPOC actors are haphazardly given the roles of token characters embodying harmful, inaccurate stereotypes. In the worst cases, their tales are invisible. They are completely erased from the homepages of streaming services, sheets of Playbills, and minds of too many consumers; the remaining eraser shavings symbolizing the last vestiges of hope for BIPOC artists. Hope, though, can be engendered once more. In order to do so, it is vital for the entertainment industry to make a commitment to upending casting procedures that submit to white supremacy and deprive BIPOC actors of opportunity and visibility.

So, what is the industry waiting for? Now more than ever, the screen and the stage must be spaces where a variance of races and ethnicities are not only acknowledged but also embraced. Manuel-Miranda, in spite of his missteps, recognized this and made a well-intentioned, bold attempt to rebel against white American theatre and reclaim and redefine theatre-making. It is time for others — in particular, white people belonging to the upper echelons of the film, theatre, and television world — to follow suit. It is only then that the cultural ground on which we stand will be encompassed by what Wilson wished upon his fellow Black artists 24 years ago: “angelic grace, peace, prosperity, and the unencumbered pursuit of happiness."