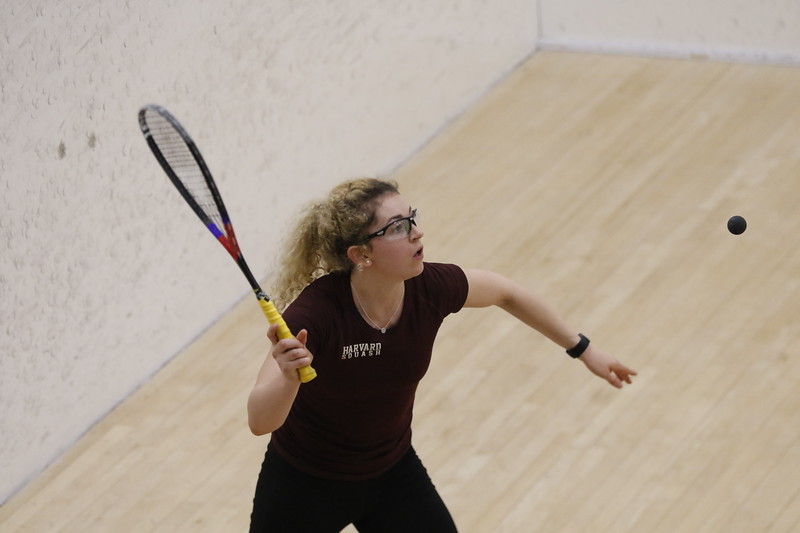 Senior Gina Kennedy has been a star for the Crimson over her fruitful career. By Timothy R. O'Meara
By Claire Albert, Contributing Writer

Senior squash co-captain Gina Kennedy wakes up around 8 for breakfast at 8:30. She goes to class or does school work until 2:45 when she heads across the river for 3:30pm training. Then lifts from 5-6pm, showers and heads back across the river for dinner. More homework and sometimes social time post dinner.

On match days, the 2-time individual national champion’s schedule shifts slightly. Kennedy and her teammates go for a light morning workout and return to the courts in the late afternoon. The co-captain cheers on her teammates until around 20 minutes before her match when she breaks away from the spectators to prepare mentally and physically.

Growing up, Kennedy played mostly by herself. Clinching five British National Championships, a U19 European Championship, and achieving the number one in England ranking in the U13, 15, 17, 19 age categories was largely an individual pursuit. Her success in the junior circuit was accompanied with immense anxiety. “I felt so much pressure, I was just desperate to win,” said the Beckenham, England native. “When I played for myself, and I lost, there was no repercussions for anyone. It was just me.”

Now at Harvard, Kennedy has adjusted to becoming a teammate. When Kennedy steps on the court wearing Harvard colors she is thinking of her team. “The goal is different at Harvard, they’ve made this individual sport into a team sport. I’m thinking in terms of how many matches the team has won, what I need to do to contribute to a team win.”

Kennedy’s thinking mirrors that of Coach Michael Way. The James Herscot '58 Coach of Excellence is in his 10th year of coaching at Harvard. Way emphasizes the importance of a program that prioritizes character development and a mindset of constant contribution. “Everybody contributes. When we think of the word synergy, that is absolutely what it is... something greater than the sum of its parts.”

“Being neutral is absolutely not ok. Some student athletes think, especially in an individual sport, that they can be neutral because at the end of the day, in their mind, it only affects them. But of course that’s not true.”

Coach Way and Kennedy both cited Monday’s “challenge matches” as an example of the program’s commitment to resilience, respect, and team-oriented thinking.

Challenge matches stem from collegiate squash’s “ladder” organization, a system that explicitly ranks players’ ability as compared to one another. In competition, team’s individual seeds play one another and the cumulative number of match wins determines the victor.

Importantly, the ladder is dynamic. On Harvard Squash, the possibility of adjustment comes every Monday when the line up is challenged- number one playing number two, number three playing number four, and so on.

Although the matches themselves are often incredibly stressful, Kennedy and Coach Way comment on the meaningfulness of players' behavior post-match. “It’s really to do with how they deal, character and maturity wise, post match. It has to do with ego suppression on one side of it, being supportive and helpful on both sides, but especially the victor,” responds Way.

As opposed to the weekend contests against rival schools, playing against teammates represents its own set of stressors. Simultaneously though, challenge matches create a space for the team to grow stronger as a unit. “Normally, after a match you just kind of go off and do your own thing. It’s different playing teammates. On Mondays we have lift at five o’clock straight after. If you win or lose, you go partner up with the person you’ve just been on the court with.”

Way comments that not all teams embrace the potential conflict of challenge matches so readily. “The stress of these situations is so high, many teams avoid challenge matches.” He disapproves of this messaging, understanding his role as a coach to guide student-athletes through stress, not teach them to avoid it. “We call it stress with answers.”

The coaches and upper classmen embrace a “get over it” philosophy, buying into a team culture that requires athletes to put their ego aside. “They learn how to navigate being a friend, being a teammate, and still being able to compete at the highest level possible to beat their opponent,” says Way.

In her senior year, Kennedy reflects on her motivations for playing squash. “I was nine years old when I started, I genuinely do love it. Training day in and day out, it’s obviously a sacrifice but that’s what I want to be doing. I want to be training.”

Post-graduation, Kennedy will move back to London to train full time as a professional player. She’ll travel around the world playing in tournaments trying to elevate her ranking.

Pursuing a professional career will come with it’s own set of stressors. Competing for prize money and sponsorships attaches a new level of pressure to Kennedy’s individual performance.

But Kennedy feels confident her time at Harvard with Coach Way has prepared her for the challenge. “Being a part of Harvard Squash has taught me how to be more mentally tough. Our coach does a lot of mental work with us and this is definitely going to help me when I enter my pro career.”