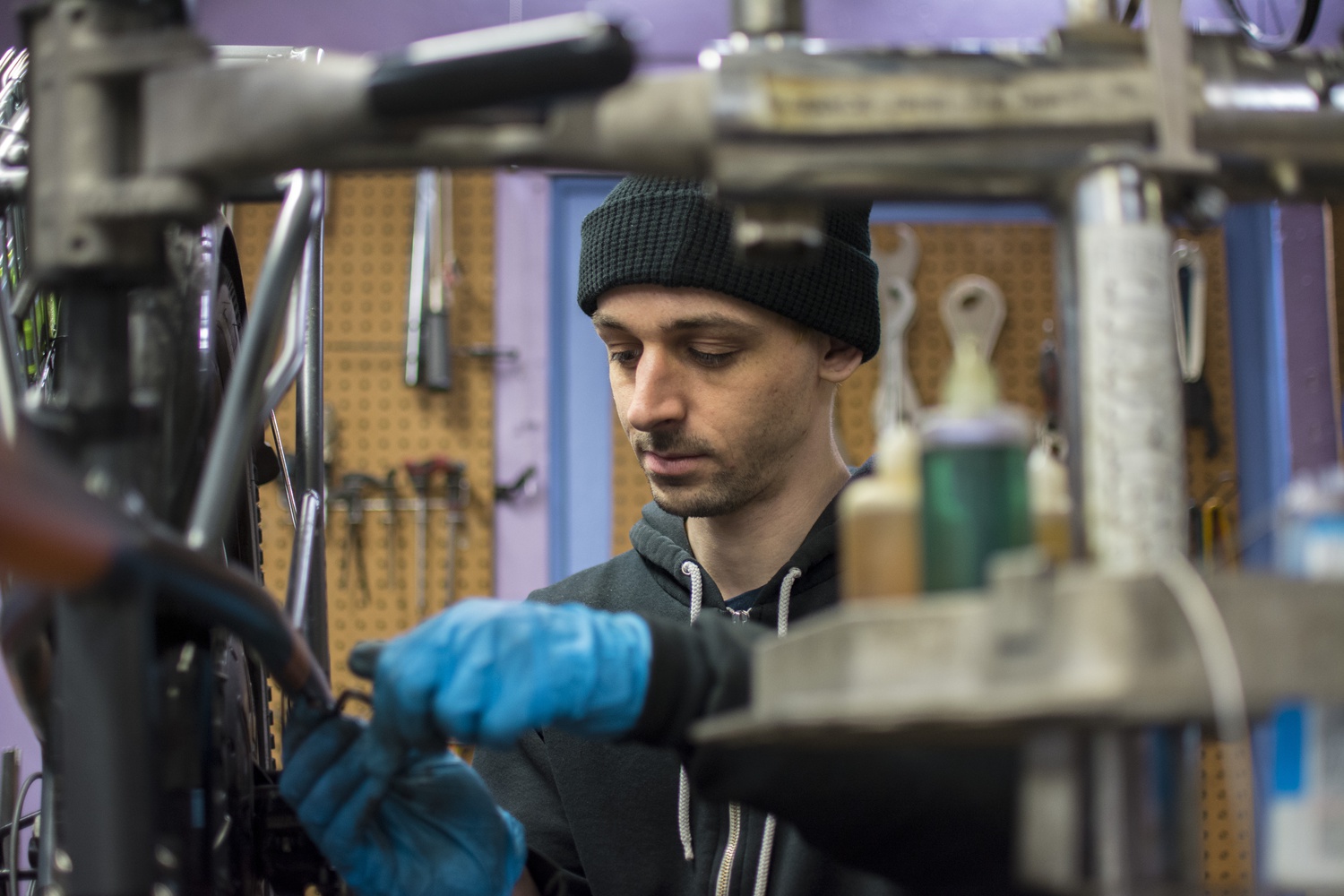 Quad Bikes may not actually be a communist utopia, but it is a non-profit and “informal co-op” devoted to spreading the joy of cycling.
By Lily J. Cunningham

A cacophony of AC/DC and clanging metal can be heard pouring out of the windows of Cabot House basement most afternoons. Down below, four mechanics are immersed in their work, tinkering with bike frames suspended in the air and tapping their feet to the music. The front desk is cluttered with business cards and stickers bearing the name of the shop: Quad Bikes.

The mechanics appear to be in their late twenties, dressed in denim and flannels. Bike tires and tools hang from the walls and ceiling in an ordered chaos that only the mechanics can decipher. They easily hold conversations with customers without stopping their work — it seems to come as second nature. Above the computer at the front desk, the Communist Manifesto is stapled to the wall, with a label below reading “Quad Bikes Training Manual.”

“We’re all kind of the manager. We’re anarchists here,” Neil L. McMullen, a mechanic entering his fifth year at the shop, explains.

Quad Bikes may not actually be a communist utopia, but it is a non-profit and “informal co-op” devoted to spreading the joy of cycling. The shop offers bike repair services to the Harvard and greater Cambridge community at affordable rates. Because it leases its space for free from the university, the shop can keep prices low, and without owners or shareholders, it survives by breaking even each year. Whatever profit Quad Bikes makes goes into buying more equipment and paying its employees. 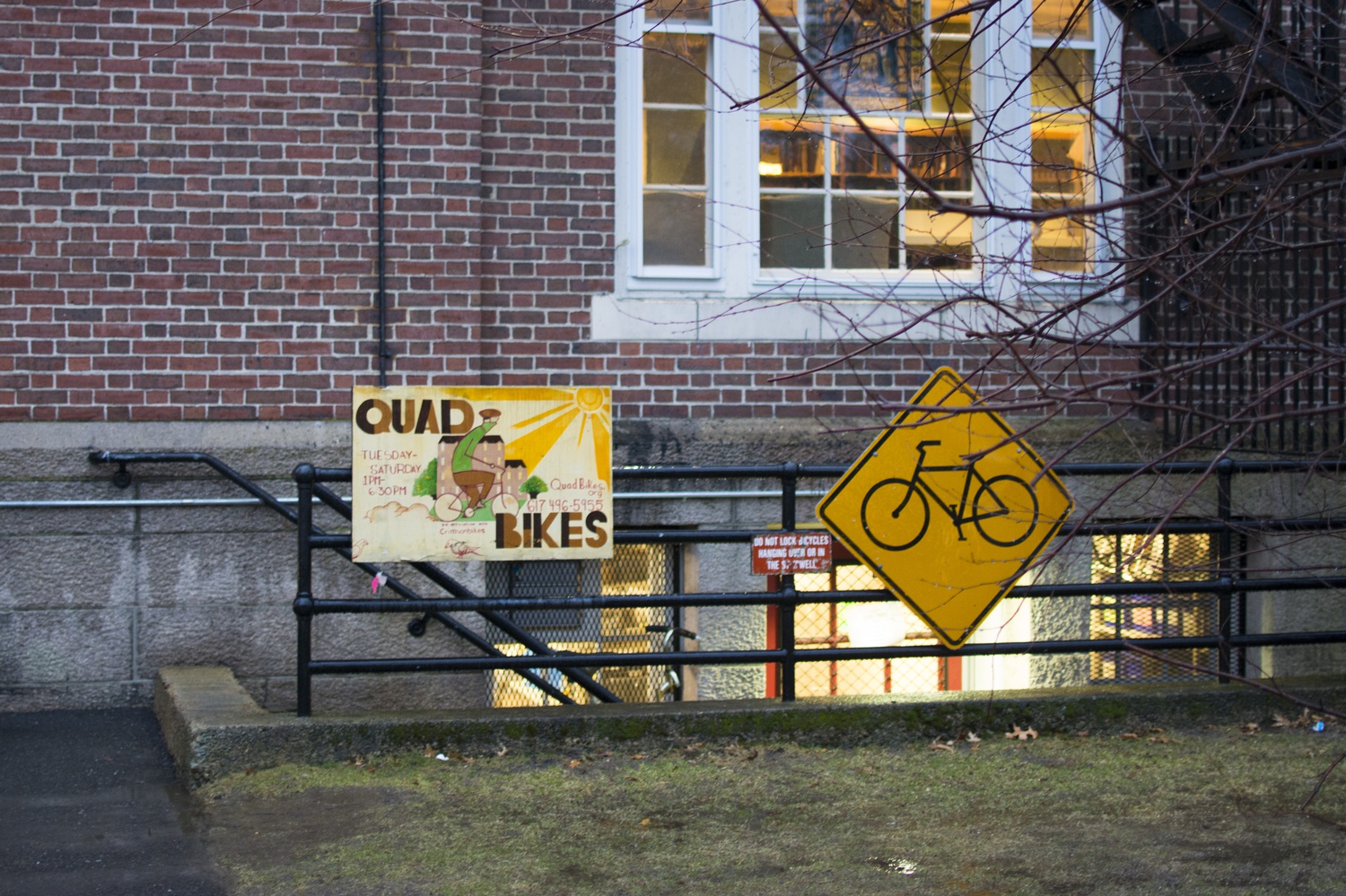 Quad Bikes is a non-profit bike shop housed in the basement of Cabot House, offering bike repair services to the Harvard and Cambridge community at affordable rates. By Thomas Maisonneuve

Started in 2003 by Juan C. Agudelo ’03 and Timothy D. Ledlie ’02, two bike-enthused Harvard alumni, the shop’s original mission was to serve the students and faculty of Cabot House. Today, the mechanics strive to spread their love of bikes to as many people as possible.

“In a more abstract sense, we want to make cycling accessible to populations for whom it would not otherwise be feasible: students, homeless people, just people of our generation who are struggling to get by,” McMullen says.

In the back of the shop, tattered bikes wait for repair, tagged with their ailments. Each year in September, this room is filled with bikes that are practically unrideable — after the Phillips Brooks House Association’s Annual Bike Auction, students are sent to Quad Bikes to repair their new bounty.

Despite a complete lack of marketing, Quad Bikes has drawn a large following. “We’re thinking of making some sale flyers,” says Andrew L. Marfoli, another mechanic approaching his sixth year at the shop. “But we’ve always been able to make it work without doing that.” Above The Communist Manifesto, a coffee-stained poster hangs on the wall: “Best of Boston.” The shop didn’t need fliers to win the award from Boston Magazine last year — why make them now?

The award poster is barely visible through other repair notes, scraps, and memorabilia that decorate the entire space. The jumble of the wall reflects the eclectic character of the bike mechanics themselves. Each of them is deeply committed to cycling; they bike to work each day. Marfoli’s commute is 45 minutes: tough in wintertime, but he laughs it off as a minor inconvenience. 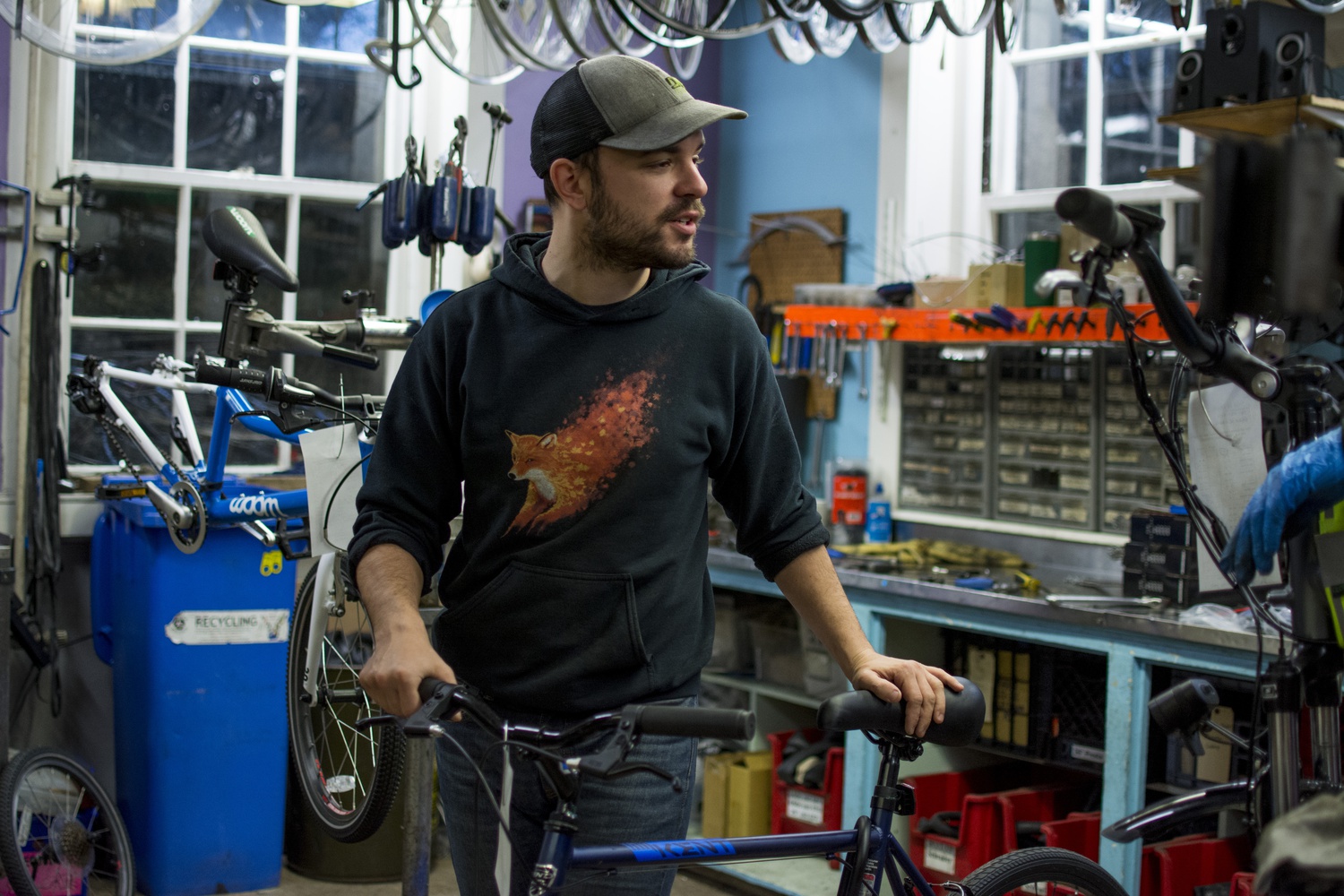 "We're all kind of the manager," says Neil L. McMullen, who has been working at Quad Bikes for five years. By Thomas Maisonneuve

Quad Bikes has the following and alternative charm that might make itself into another gleaming campus attraction. But the warmth and personality of the store stands in unique contrast to the mainstream polished image of Harvard.

“We can’t really call ourselves external to capitalism, but we are anti-capitalists at heart,” McMullen says. “We try to exist as an antidote to that model.”

— Magazine writer Lily J. Cunningham can be reached at lily.cunningham@thecrimson.com.