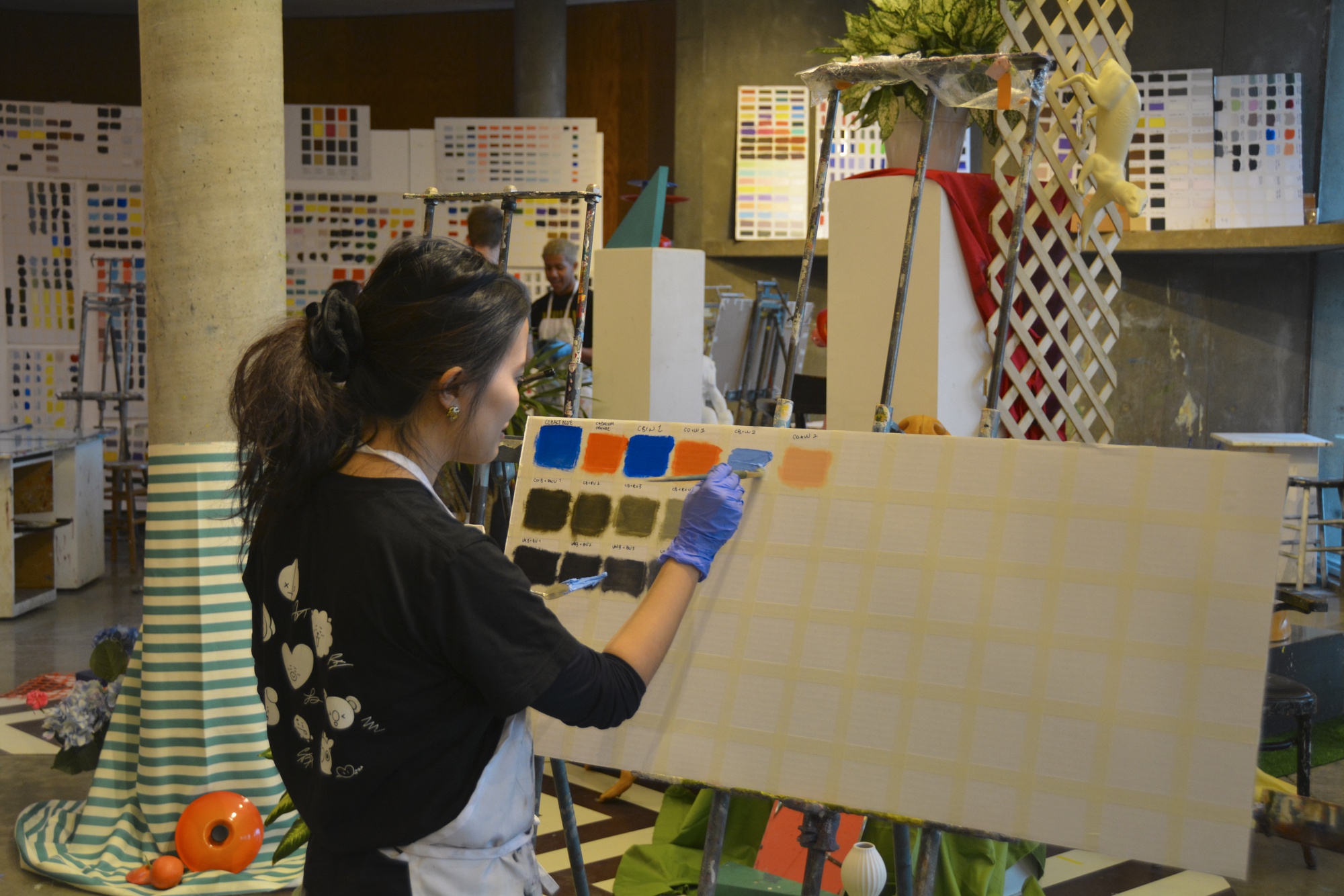 A student in "Painting’s Doubt" works on an assignment during a 4-hour long section last Friday.
Advertisement
Advertisement

72 Students in the Studio

“Painting’s Doubt” is unlike any other introductory painting course taught at Harvard. While most studio classes are capped at anywhere from 12 to 20 students, Painting’s Doubt has room for 72.
By Nicole B. Farina

Professor Matt R. Saunders ’97 might be teaching the most expensive Gen Ed ever offered.

“I’ve spent $15,000 on supplies, already, within the last three weeks,” Saunders says, sitting in his office — a tiny room tucked away in the far back corner of the Carpenter Center’s drawing studio.

Saunders’ s significant expenses are financed by the budget of the studio art General Education course he is piloting this semester: “Painting’s Doubt: A Studio Course” (Gen Ed 1114). “We provide all of the materials for the classes because we don’t want there to be a limiting factor, and we budget accordingly. So I was concerned about being able to scale that up, but I’ve basically been given everything I’ve asked for, “ Saunders explains.

Usually, Saunders and the other studio art professors in the department of Art, Film, and Visual Studies (AFVS) need to turn away as many as 85% of course applicants every semester for logistical reasons. Besides being disappointed about not being able to teach painting to all who wanted to learn, Saunders was frustrated with this type of selection process because it contributed to a perception on campus that AFVS classes are inaccessible to non-concentrators. “I’ve always thought about how we needed to have bigger gates, and also that there was a real curiosity in the student body, people who were never going to be concentrators, to have that experience of working in this way,” Saunders says, referring to the desire of students to experience the hands-on creation inherent in studio classes.

“Painting’s Doubt” is unlike any other introductory painting course taught at Harvard. While most studio classes are capped at anywhere from 12 to 20 students, Painting’s Doubt has room for 72.

In an effort to serve a more diverse portion of the undergraduate population, Saunders created this six-fold “scale-up” of the typical intro-to-painting studio class so that it could be taught under the Aesthetics and Culture General Education requirement. The number of lottery applications — Saunders cites a figure that falls around 390 students — is reflective of the interest that non-AFVS students have in entering these artistic spaces. 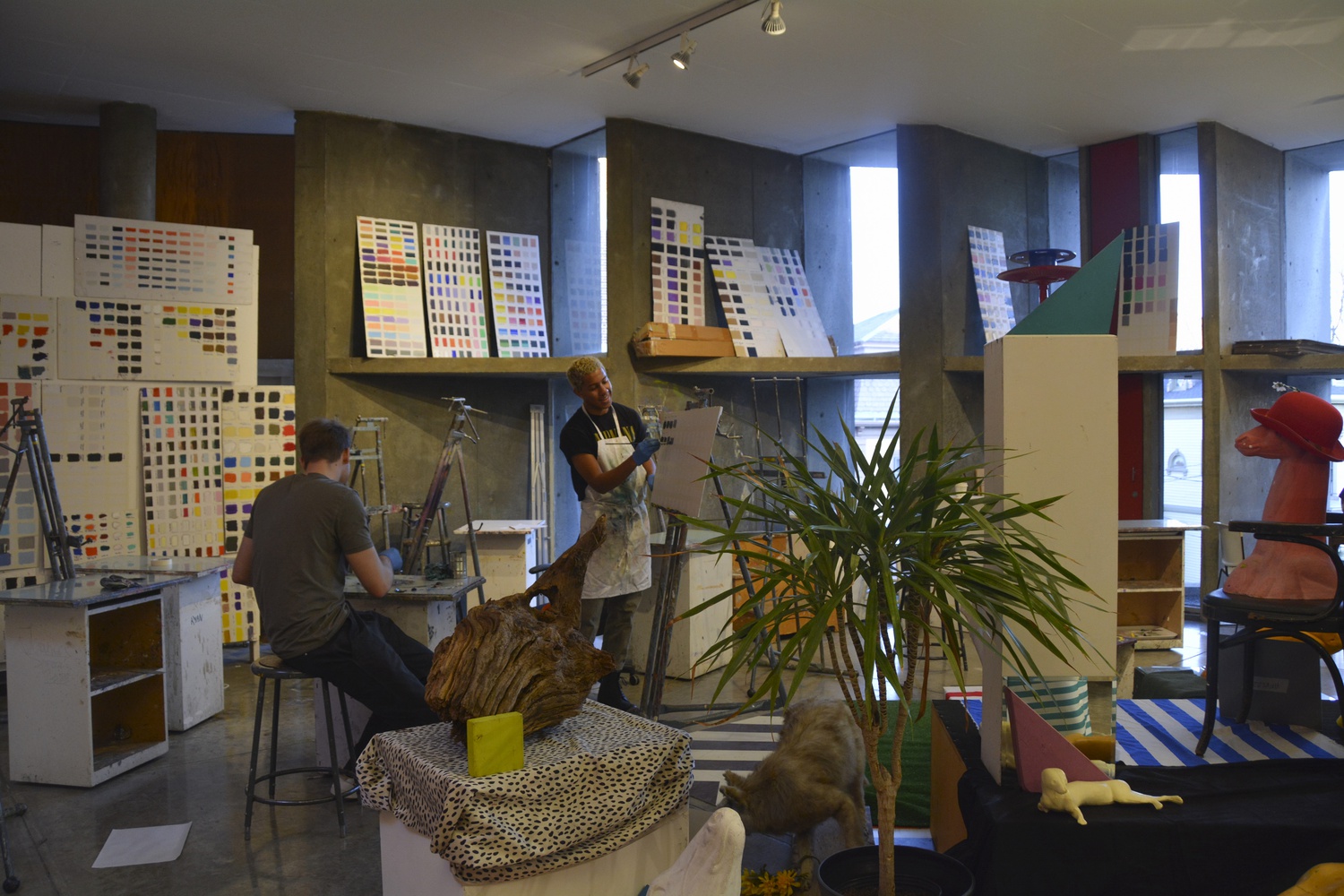 “I know that one of the biggest struggles of students who are interested in visual studies on campus is to figure out how and where to do it,” Saunders says. “I know that, per the demand of the class, I have a lot of people who painted in high school and are excited to do it again.”

After discussing the course, Saunders and I head to the painting studio to check in on one of his four-hour long sections. The students’ first painting assignments are proudly displayed along the walls. Each one is a different representation of the still life scene that is set up in the studio, varying greatly in composition, color, and choice of detail. “For a group of people who largely haven’t painted before, I’m really impressed with how much time people put in and how thoroughly people engaged with [the assignment] and how strong the results are,” Saunders says of the students’ work. “It looks like the work of a first semester class, but it doesn’t look like the first painting.”

The success of Painting’s Doubt hasn’t gone unnoticed by the rest of the AFVS department. Saunders and his colleagues are looking to develop introductory studio Gen Ed courses in a variety of different media, including photography and film. Their goal, Saunders says, is to offer at least one of these intro classes scaled-up as a Gen Ed each year, most likely on a rotating basis. Saunders says the AFVS department’s creation-based engagement with art is essential to enriching the curriculum. He points out, “If we think about Aesthetics and Culture as one of the topics within Gen Ed, we have a lot to say about that.”

Saunders hopes that making studios more accessible to students will influence the way they engage with their studies at Harvard and how they interpret the rest of the world. Saunders knows from experience how much of an impact it can have. “I studied studio art at Harvard,” he explains. “And it changed my life.”