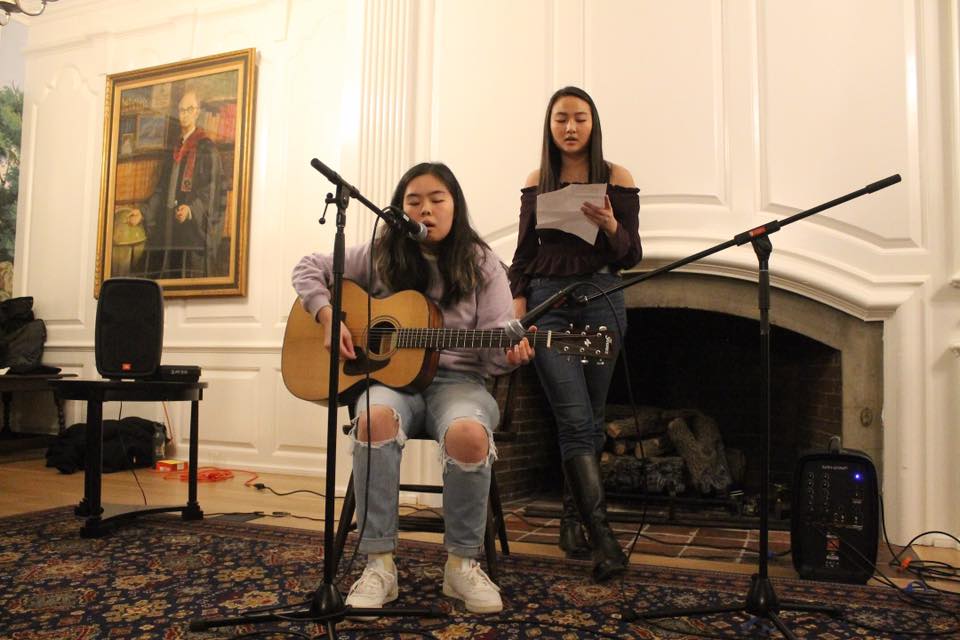 It is a trope in popular and academic writing alike to say that the absence of a precise definition of “Asian America” is what binds the identity together — that Asian Americans lack not only a literal common language, but also a common “language” in terms of a unifying ideology through which we can better understand each other.
By Matteo N. Wong

It is a trope in popular and academic writing alike to say that the absence of a precise definition of “Asian America” is what binds the identity together — that Asian Americans lack not only a literal common language, but also a common “language” in terms of a unifying ideology through which we can better understand each other.

Yet as I walked into the Lowell Junior Common Room on Friday evening, I was overwhelmed not by absence, but by abundance. Nearly 100 Harvard students, mostly Asian-presenting, sat on sofas, tables, and the floor. They jostled for sushi, a samosa, or bubble tea. Their eyes were absorbed in slim booklets of 8.5 by 5.5 inch glossy sheets, each 50 pages in total — copies of the inaugural issue of The Wave, Harvard’s first Asian anglophone arts magazine.

The cover of the magazine is a digital drawing of a wave, grey-blue water crashing onto a muted tan beach and a hazel eye emerging from the wave’s face, alluding to the famous print, titled “The Great Wave off Kanagawa.” Within its pages is a breathtaking kaleidoscope of Asian American art, 16 pieces I can’t get out of my mind: a portrait with pink and green and yellow hues overlayed on top of creamy skin, fractured lines and Chinese calligraphy imprinting on and haunting the canvas; a poem about gender whose words bend into the shape of a stem of bayog, the species of bamboo from which the term bayoguin, the pre-Hispanic Filipino term for third-gender people, derives; the reflections of an Indian American woman who grew up in Tucson on land stolen from another type of “Indian,” the Tohono O’odham people.

These are the languages — complex and overlapping, at once opaque and unambiguous — from which Asian America emerges. Bound together by a front and back cover, glue, and the tireless efforts of about a dozen undergraduates, they cohere. 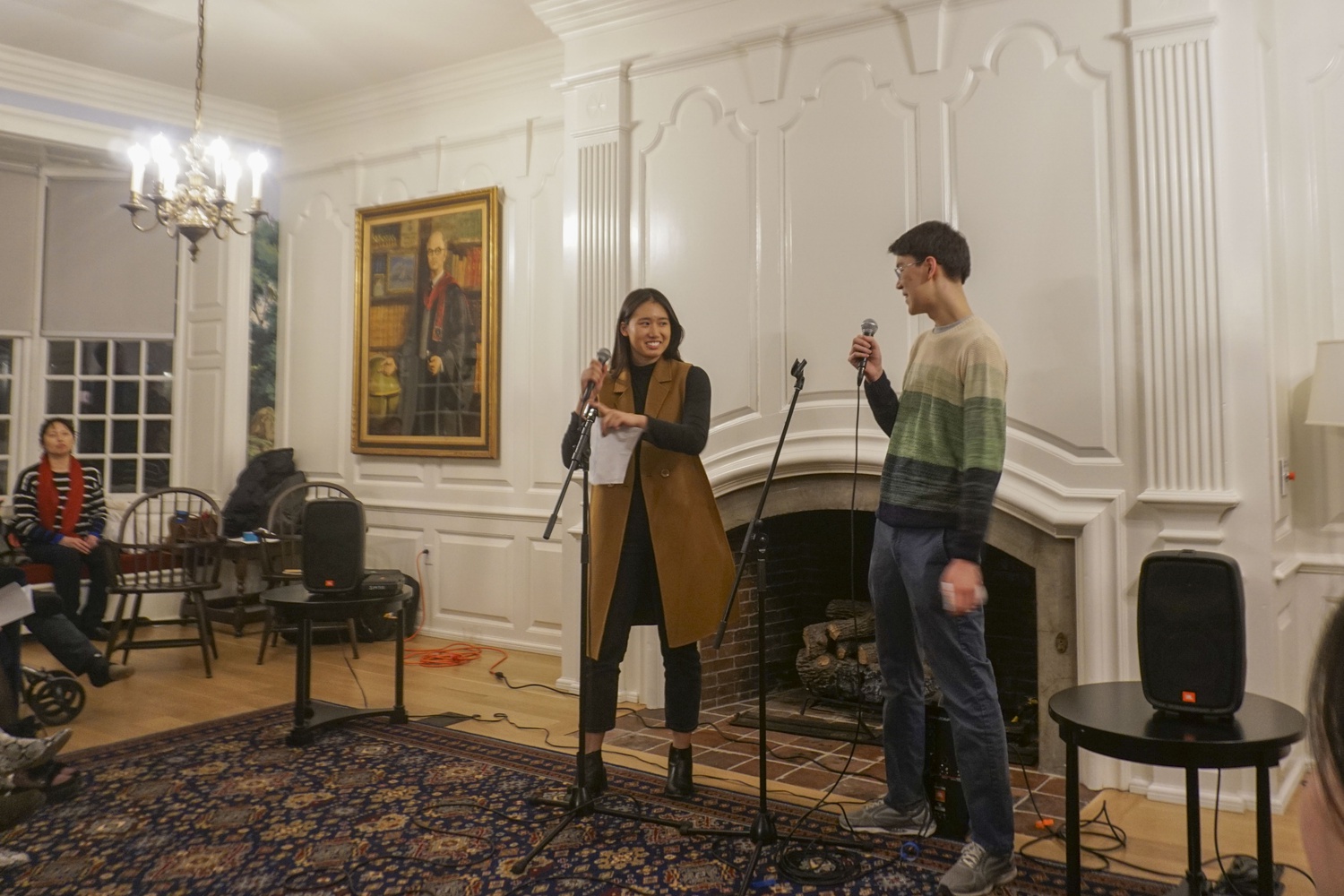 Jerrica Li ’21 and Eric Zhou ’20 are the co-founders of The Wave. By MyeongSeo Kim

Only a few months ago, it was unclear whether the magazine would come together at all. “There was a moment in the fall semester where it was literally just me and Jerrica sitting in a dining hall wondering, ‘Should this move forward?,’” Zhou said to the crowd at the launch event. Driven by the belief that Harvard’s Asian American community needed a platform for artistic expression, they persisted, amassing a small team that has worked tirelessly over the past several months to bring this project to fruition.

“The magazine that you hold in your hands, that’s a wave of love,” Li said. “We’re so glad that you’re here today to affirm that it should exist, and that it does exist.” Before she finished speaking, the room erupted into cheers and applause.

Indeed, the magazine’s opening message strikes a tone somewhere between a manifesto and a love letter, declaring that The Wave doesn’t seek to outline a single Asian experience, but rather to celebrate the identity’s multiplicity. The magazine’s name itself is a reappropriation of the phrase “a wave of immigrants,” transforming the term from a homogenizing expression of prejudice to a statement of radical community-building. It reads, “We are a flourishing movement creating art that speaks to our age, our race, our histories and our communities in the here and now.”

After Li and Zhou finished their opening remarks, two faculty members who were instrumental to the project — English Professor Ju Yon Kim, who studies Asian American literature and performance, and Eleanor Craig, who directs the Committee on Ethnicity, Migration, and Rights — gave short speeches, followed by a surprise gift to the co-founders from the rest of the team. Spontaneous applause, cries of “We love you!”, laughter and, on occasion, tears punctuated the opening remarks.

But when the Open Mic started, with a reading from the magazine, there was total stillness, the room’s vibrance funneled into serious, unflinching attention.

Just over a year ago, I was crowded into another common room in Winthrop House, with about the same number of Asian American students sitting on benches, the floor, and window sills. We were there for a discussion forum titled, “The Role of Asian Cultural Organizations on Campus,” hosted by some of the largest of these groups, including the Asian American Association and Chinese Students Association.

The room’s atmosphere, at first filled with light discussion and the oily smell of Chinese take-out, quickly turned vitriolic. Some criticized the overrepresentation of East Asians in purportedly pan-Asian spaces.Asian American students involved with campus activism attacked more socially-oriented groups like AAA and CSA for being apolitical. Defenses ranged from pointing to the impossibility of uniting all Asian Americans’ diverse political ideologies, to arguing that a social space is as important as a political one, to highlighting these affinity groups’ volunteer efforts. I left exhausted and disillusioned, but the discussion was far from over.

In November, the Asian American Womxn’s Association penned “An Open Letter to the Asian American Community,” calling out several Asian American student organizations for not co-sponsoring a set of demonstrations in support of DACA and TPS. The letter garnered hundreds of signatures, but also received intense backlash about what a political imperative for Asian America might entail, renewing tensions from last spring.

This cacophony echoes endlessly. A paralyzing fear of bitter argument lingers over any conversation I have with an Asian American friend at Harvard that veers, even slightly, toward the political.

I have always believed that there is some ineffable substance binding Asian America together. I signed AAWA’s letter because what such a diverse group as Asian America shares cannot be some static culture, but rather a recognition of interrelated struggles and circumstances. I believe this commonality produces a culture that is political in claim to or categorization as “Asian American,” even if its artistic content is not explicitly so.

I consider he radical and unifying act of coining the term “Asian America” in 1968, the Ethnic Studies protests igniting Harvard’s campus, the love of — or at least attention paid to — “The Farewell” and “Crazy Rich Asians” and “To All the Boys I’ve Loved Before,” and I can’t help feeling that a core thread must exist.

Yet the past year has shaken my faith, making me wonder whether popular Asian American writers’ proclamations — Jay Caspian Kang declaring, “nobody goes on pilgrimages back to their motherland of Asian-America” in The New York Times Magazine — are correct. Perhaps Asian America does not exist; or if it does, perhaps it is not to be found at Harvard.

Li and Zhou envisioned The Wave as an open space for Asian anglophone art. The term “Asian anglophone,” they explained, was intended to make their call for submissions “as broad as possible.” Rather than asking for pieces about identity, they invited anyone with a relationship to Asia who spoke English 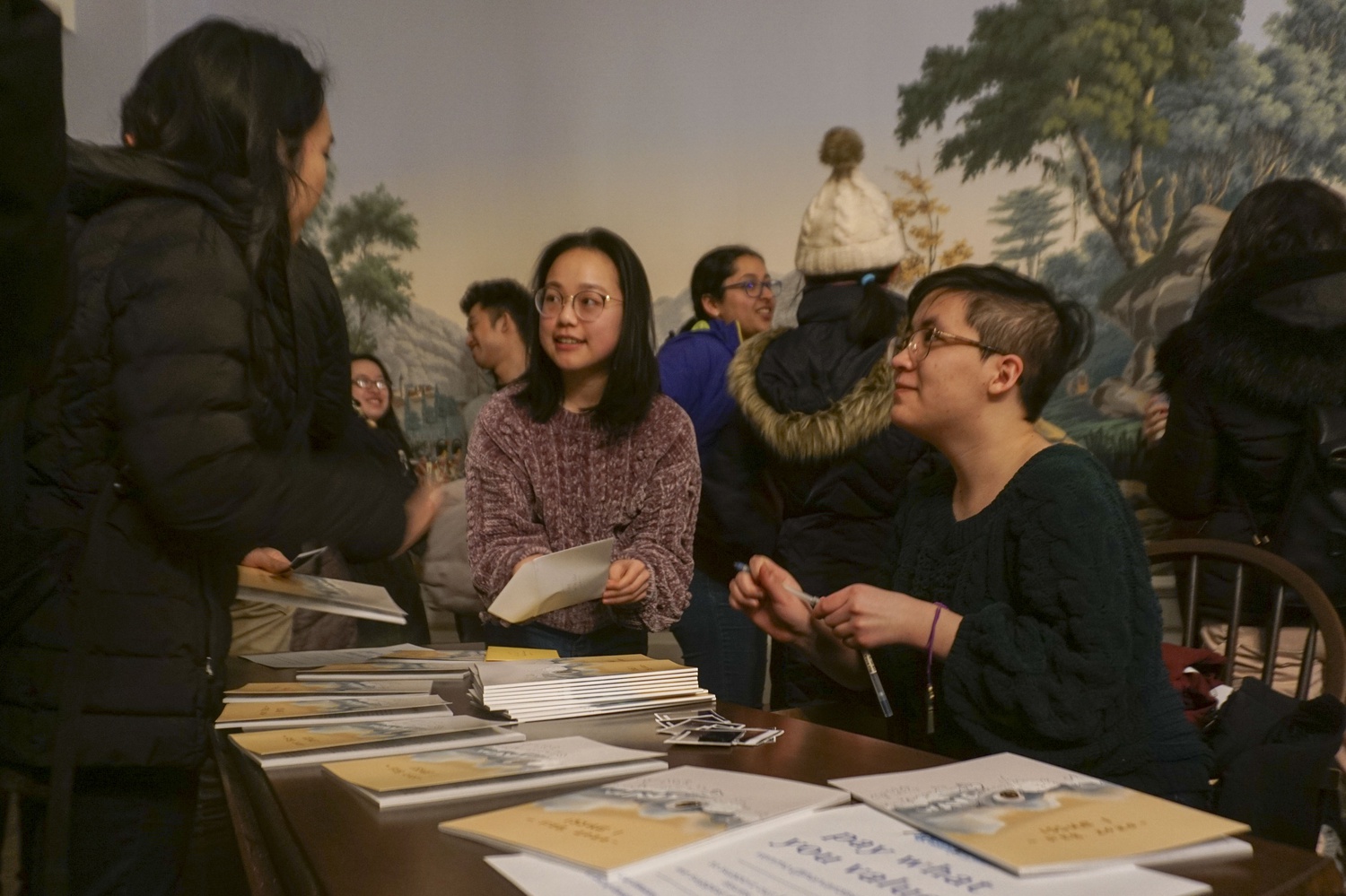 Vanessa Hu '23 and Julianna C. Kim '22 are members of The Wave. While they accept donations, the magazine is free for everyone. By MyeongSeo Kim

Hearing this vision of radical inclusivity, I couldn’t help voice some of my uncertainties: If the scope of the magazine is so broad, what holds it together? Despite using “Asian anglophone” in their submission call, our conversation centered around “Asian America.” So how did they define Asian American art? How did they go about pinpointing “Asian America” — as a geography, an identity, a product of overlapping structures?

“We didn’t come in with assumptions about what Asian America is,” Li said. “We came in creating a space and being open — always open — to amazement at what came in.”

At first, the abstractness of their answers, which danced around concrete labels and definitions, was frustrating. Now that I’ve seen the magazine, however, I think I understand. The art within is anything but non-committal.

A few pages later is “comfort,” a poem arranged in four columns that focuses on the Korean women who were sexually enslaved by Japanese soldiers: “when I seek comfort / in my husband’s arms / now I think of / the white rice ball / Shimura-san left me.”

The Wave does not have a single definition of Asian America, nor a single politics that it is dedicated to. But each individual work is dedicated to its own, internal message. Each is an instantiation of not only Asian America, but also of an individual’s vision. And from the collective emerges the magazine, a whole body with commitments to expression and beauty, to internal ambivalence as well as unity. These 16 pieces, in constellation and conversation with one another, form a collective instantiation of Asian America.
Perhaps Asian America need not be such a rigorously-defined mode of classification; perhaps, at a single moment in space and time, Asian America emerges, an ever-shifting wave of voices.

“What brings it together?” Li continued, her pace slow and methodical. “We didn’t answer that question.” She paused. “The artists answered that question.”

The other thing weighing on my mind was more explicitly political: How did they situate The Wave within Asian American campus politics?

“At the end of the day it’s also just a book of work — beautiful, beautiful works of art by people who wanted that space and have it,” Li said. “And that’s how it should be enjoyed as well, on that level.”

Yet the magazine exists on two levels: as a collection of individual works of art, and as a vision for Harvard’s first Asian American literary and arts magazine. I thought of AAWA’s letter and call to action — to exist as a person of color in the United States, to claim the label Asian American, is always already to invoke politics. Before I could say anything, the co-founders were several steps ahead of me.

“What’s inherently political about it, on a metalevel, is its existence, that we say this should exist — that’s a political statement,” Li said. “What’s political about it is that it decided to exist and that it wasn’t just us two dreaming in a room — like, it happened.”

Her words reminded me of a piece I reported last spring, on the origins of an Asian American consciousness on Harvard’s campus in the 1970s. Then, there were so few Asian-identifying students on campus that the very act of gathering, of sharing art and food and laughter, was political.

An Asian American community exists at Harvard, splintered and exhausted, vibrant and emergent. Like The Wave, it is imperfect — a “baby,” Li said. Nonetheless, “we tried really hard to do justice to the voices, because the artists were most important to us.” And they hope The Wave, where past Asian American publications have puttered out, will extend indefinitely — with more issues, expanding to more mediums, and publishing more work online.

Like The Wave, the act of gathering — of collecting 16 works of Asian anglophone work within 50 pages, of drawing roughly 100 Asian Americans into the Lowell Junior Common Room on a Friday night — is politics.