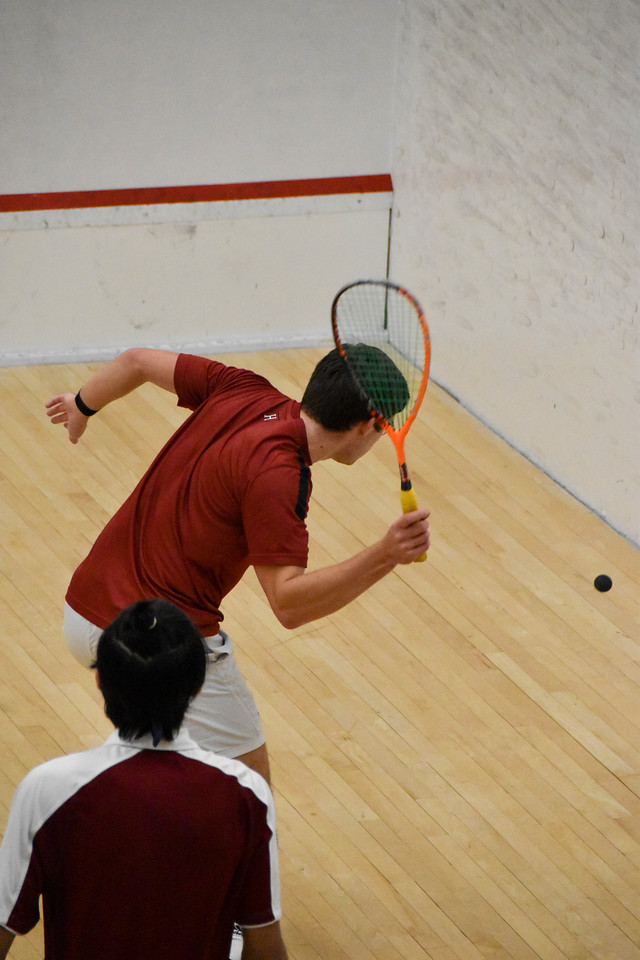 Attacking his opponent, St. Lawrence University’s Belal Nawar, with an onslaught of straight drives and gut-ripping cross-courts, Harvard men’s squash senior captain Sean Hughes sent his opponent scampering into the back corners before finishing off the rally with a vicious forehand kill. His accurate play led him to a hard-fought 3-0 victory over his opponent in the third seed matchup. It was one of Harvard’s nine victories in a sweep of St. Lawrence on Saturday afternoon. The squad has won its last 25 matches dating back to the beginning of last season.

Harvard Junior Adam Corcoron, who played fifth seed, obliterated his St. Lawrence counterpart, conceding just one point in the final game to win his match 3-0, by scores of 11-0, 11-0, and 11-1. Junior Samuel Scherl, who played second seed, won his team-high 23rd match in a row with a 3-0 victory of his own. First-years Ayush Menon and Liam Rotzoll, who played eighth and ninth seed respectively, continued their undefeated starts to the season and improved to a combined 17-0.

Hughes, who has been on the team each of the last four seasons, credits the team’s incredible run of success to its strong work ethic and excellent leadership.

“I think the work ethic that this team has is pretty unparalleled,” Hughes said. “We are coming in twice a day most days and working very hard. We have good guidance from [Head Coach Mike Way], [Associate Head Coach Hameed Ahmed], and [Assistant Coach Luke Hammond], who are very knowledgeable about the game.”

“We [do] a lot of fitness and strength training. And I think we're really deep from one through nine,” added Rotzoll.

In his first game against Nawar, Hughes was caught a little flat-footed by Nawar’s rapid style of play — however, he managed to recover in time to win the game and, eventually, the match.

“I could have come out stronger,” Hughes said. “I think I think I came into it a bit loose and [Nawar] kind of took advantage of that. [Nawar] plays at a very high pace. He came out and was on top of the ball, and I was definitely on the defensive side of things.”

“[But] I locked the court down [at] the end and that worked well,” Hughes added.

The day before its match against St. Lawrence, Harvard’s squad swept its match against the University of Virginia Cavaliers, 9-0. Senior captains Saadeldin Abouaish, Timothy Brownell, and Hughes all won their matches to remain undefeated on the season. Sophomore George Crowne made a successful return to the lineup with a 3-0 trouncing of his UVA opponent in the sixth pairing.

For Brownell, the two victories were especially important because they showed he was fully back in form after missing time due to an injury.

“I was out a lot of the fall with the injury,” said Brownell. “So for me being on court and feeling better and my feet moving around has been a really big part of it. For me, being able to win two matches this weekend against good opponents is a real confidence booster. [I] thought I played well enough and that's just gonna keep the momentum going, rolling forward, because we're gonna have some big matches.”

Harvard will face more stiff competition in its next match, when it faces off against rival and number 2 seed Trinity on Wednesday.

—Staff writer Eliot Min can be reached at eliot.min@thecrimson.com.