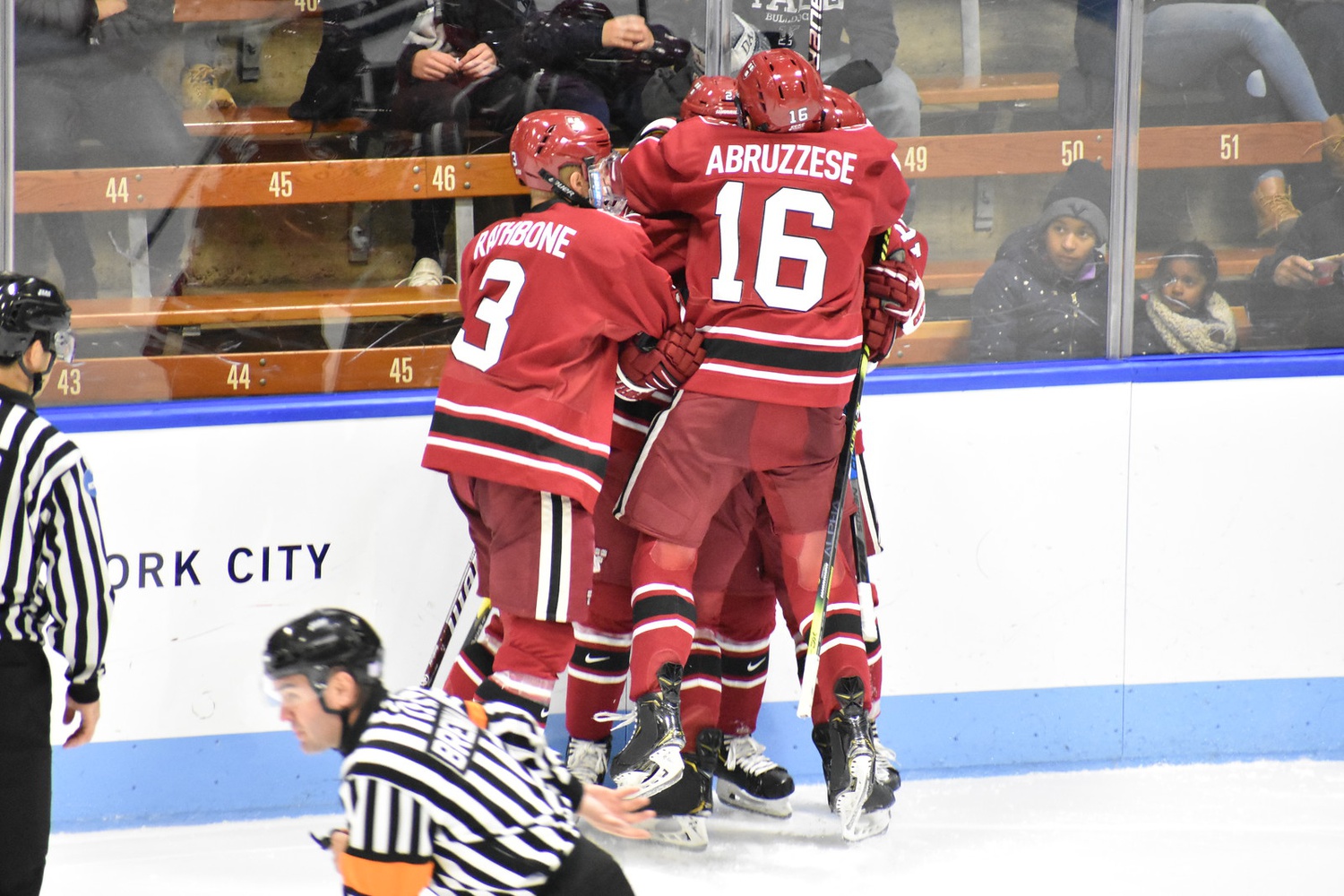 The Crimson skated past the Big Green Friday night to earn its third and fourth points against the conference foe this season. By Amanda M. DiMartini
By Spencer R. Morris, Crimson Staff Writer

In Friday night’s matchup between the Harvard men’s hockey team and Dartmouth, the prettiest goal turned out to be the most important one.

Five minutes into the second period, a settled offensive sequence culminated in a tic-tac-toe play, nabbing the game-winner for the No. 17 Crimson (11-7-4, 9-4-3 ECAC).

Junior rearguard Reilly Walsh controlled the puck at the point. The offensive defenseman worked it down low to sophomore center Jack Drury, who one-touched it across the crease to freshman Nick Abruzzese. The winger wasted no time putting home his squad’s third of the night.

Courtesy of Abruzzese's tuck, the Big Green (10-9-4, 7-7-2) saw its winless streak progress to five games as it suffered a season sweep at the hands of its Ivy League adversary, to the tune of 6-2. With the victory, Harvard becomes just the second team in 2019-2020 to leave Thompson Arena with two points.

“They’re an older team, they’re experienced, they’re well-coached,” sophomore blue-liner Marshall Rifai said. “Especially coming off a Beanpot loss, the guys were really chomping at the bit to get back in games and get a win. We felt pretty confident in our group, and we knew we needed these two points.”

At the 14-minute mark of the third stanza, Dartmouth halved its two-goal deficit. Upperclassman forwards Collin Rutherford, Matt Baker, and Daniel Warpecha combined to find the back of the net. Warpecha was the culprit, firing a high shot past Harvard net-minder Mitchell Gibson (2 GA, .917 SV%) to finish off an impressive transition play.

The claw-back goal made things interesting for the next ten minutes, but none other than Drury and Abruzzese combined to restore Harvard’s two-score cushion at 4-2, snuffing the Big Green’s comeback attempt.

The first forward line’s performance extended Drury’s point streak to ten games. During this span — which was interrupted by Drury’s stint at the IIHF World Junior Championship — the second-year forward has compiled 20 points (11–9—20). He has steadily climbed the Division-I ranks and is now second nationwide in points per game (1.53).

Abruzzese, meanwhile, is putting together an excellent rookie campaign, having flanked Drury for most of the season. The Slate Hill, N.Y. native has inked the scoresheet in all but four of his 22 appearances in 2019-2020. He currently paces all NCAA freshmen in points per game (1.36) and assists per game (0.86). 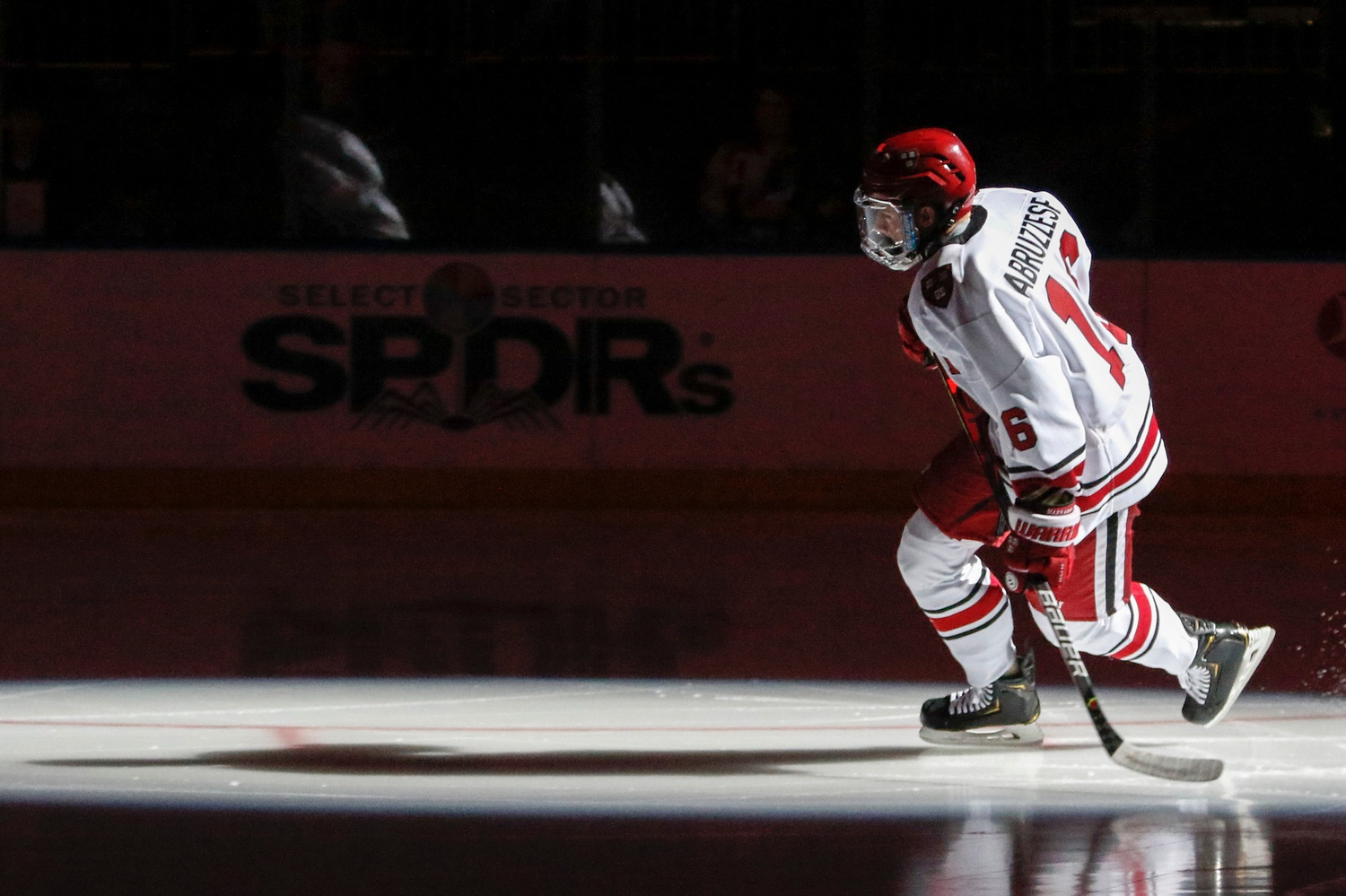 Rookie winger Nick Abruzzese has quickly become one of the NCAA's most lethal freshman. His 30 points tie him for the lead among all first-years in Division I. By Timothy R. O'Meara

“[Abruzzese] is an incredible player,” said Drury, deflecting all the credit. “His vision, his skating, his hands are all incredible. He understands how to play give-and-go hockey. He’s one of the best passers I’ve ever seen…. It’s been nice to at least find a little chemistry this year.”

An empty-net goal from freshman forward John Farinacci and a garbage-time tally — but an even-strength notch nonetheless — from captain Nathan Krusko gave the scoreboard its lopsided appearance by the final horn.

“It was a close, hard-fought game,” Drury said. “I don’t think the score really reflects how the game actually played out. It was a one-goal game until five or six minutes left…. We know we can be better, but we’re happy with how we stayed composed and stuck to our structured gameplan.”

Demler’s illegal hit on sophomore blue-liner Jack Rathbone came toward the tail end of a Big Green minor penalty. Thus, the task of outlasting a non-releasable, five-minute Crimson powerplay was made even more daunting given the fatigue of the Dartmouth penalty killers.

The Big Green held strong for the first three and a half minutes of the ensuing major. Then, Harvard cashed in, thanks to the second man-advantage unit.

Gliding along the blue line, Rifai rung a wrist shot off the crossbar. The puck initially stayed out but lingered near the front of the net, where freshman forward Austin Wong tapped it in.

The Crimson has converted with the extra man in all but four tilts this season.

“That first [powerplay] unit gets a lot of attention because they’re so good, and we have so much talent,” said Rifai, who logged his first career multi-point performance on Friday. “But people forget how deep our team is…. I think our staff is confident with both units. It was great to take a little pressure off that first unit, to score that goal and go ahead late [in the first period].” 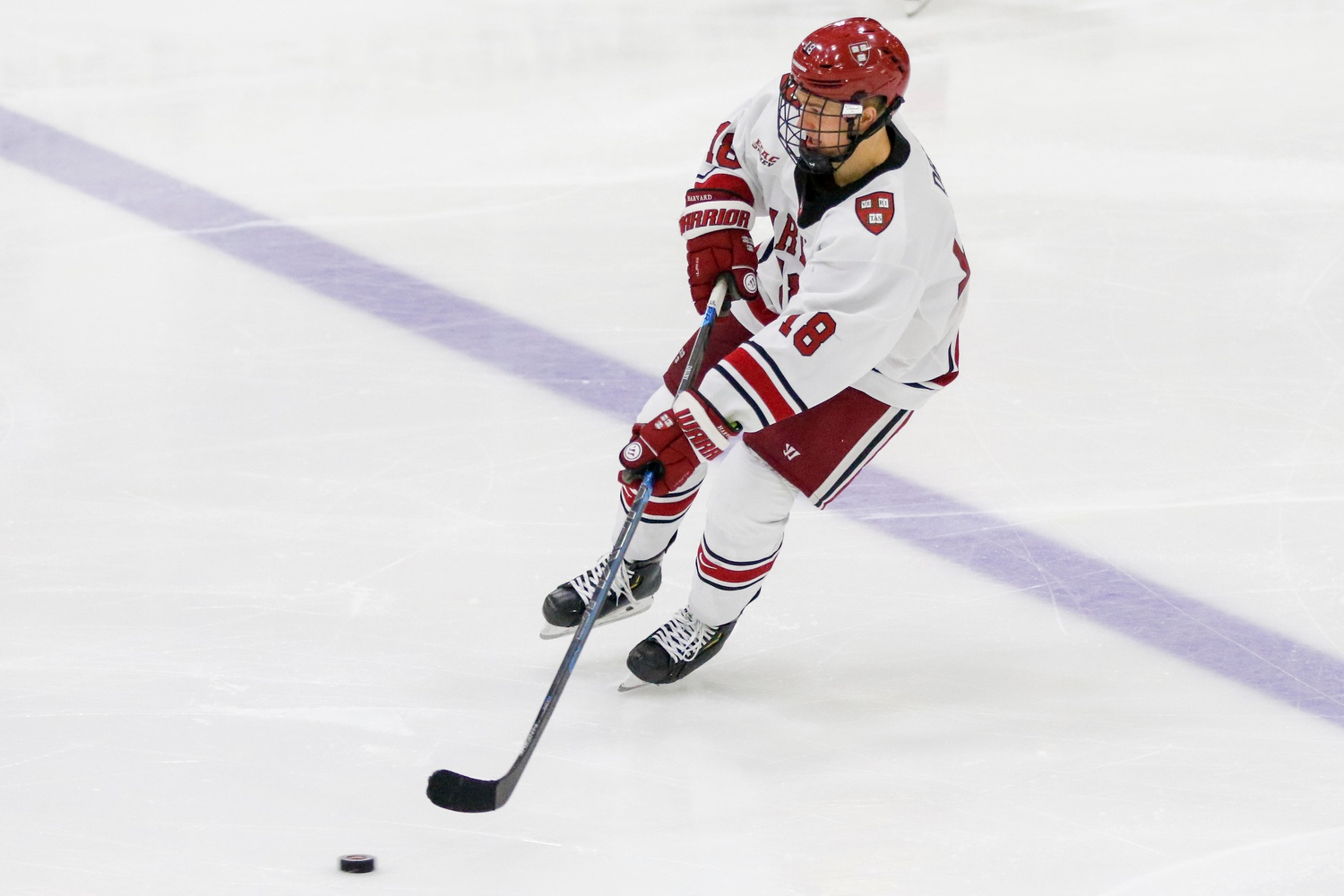 Sophomore center Jack Drury has emerged as the backbone of his ranked Crimson squad. Already a leader in the locker room, the forward is among the NCAA's highest per-game scorers this season. By Timothy R. O'Meara

Wong’s lamp-lighter ends a 10-game dry spell after the rookie potted his first collegiate goal in his debut — he was sidelined due to injury for the Crimson’s first 10 outings of 2019-2020.

The powerplay tally thrust Harvard back into the lead, as the frame had already seen the Ivy League rivals exchange blows.

Three minutes after the opening puck drop, junior Jack Badini kicked off the scoring with a demonstration of his speed. In the neutral zone, the centerman poked the puck around senior forward Will Graber and was off to the races, in alone on senior goaltender Adrian Clark (5 GA, .815 SV%). Badini tucked it under the bar with a clean finish on his backhand.

The Anaheim Ducks prospect’s fifth of the year marks the 16th time in 22 contests that the Crimson has scored first this season, a testament to the group’s ability to impose its potent offense early. Harvard sits second in the NCAA in first-period goals per game (1.27).

The visitors’ lead was short-lived, though. Four minutes after Badini’s strike, sophomore forward Drew O’Connor buried a feed from junior linemate Quin Foreman to equalize. Foreman gained possession below the goal line, found some space, and shoveled a backhand pass toward the blue paint, where O’Connor sent the puck past Gibson.

“Badini had a great individual effort there,” Rifai recalled. “He showed his speed and got us on the board, and there was a lot of life on the bench. I feel like maybe we got a little complacent, and we paid for it. We lost a guy in front, and they scored. But guys on the bench responded really well. We knew right away that we were going to get the next one.”

The Crimson pauses its conference slate briefly to finish off this year’s Beanpot Tournament. Unfortunately for this group, that means playing in the dreaded “early game,” or Monday’s consolation matchup ahead of the finale later that night.

Harvard will be battling No. 4 Boston College in a rematch of early December’s 3-2 Eagles victory — despite the lack of stakes attached, both an important game for the Pairwise rankings and a measuring-stick affair for a group with postseason aspirations. A positive result could orient the team in the right direction as it braces for the home stretch of the campaign.