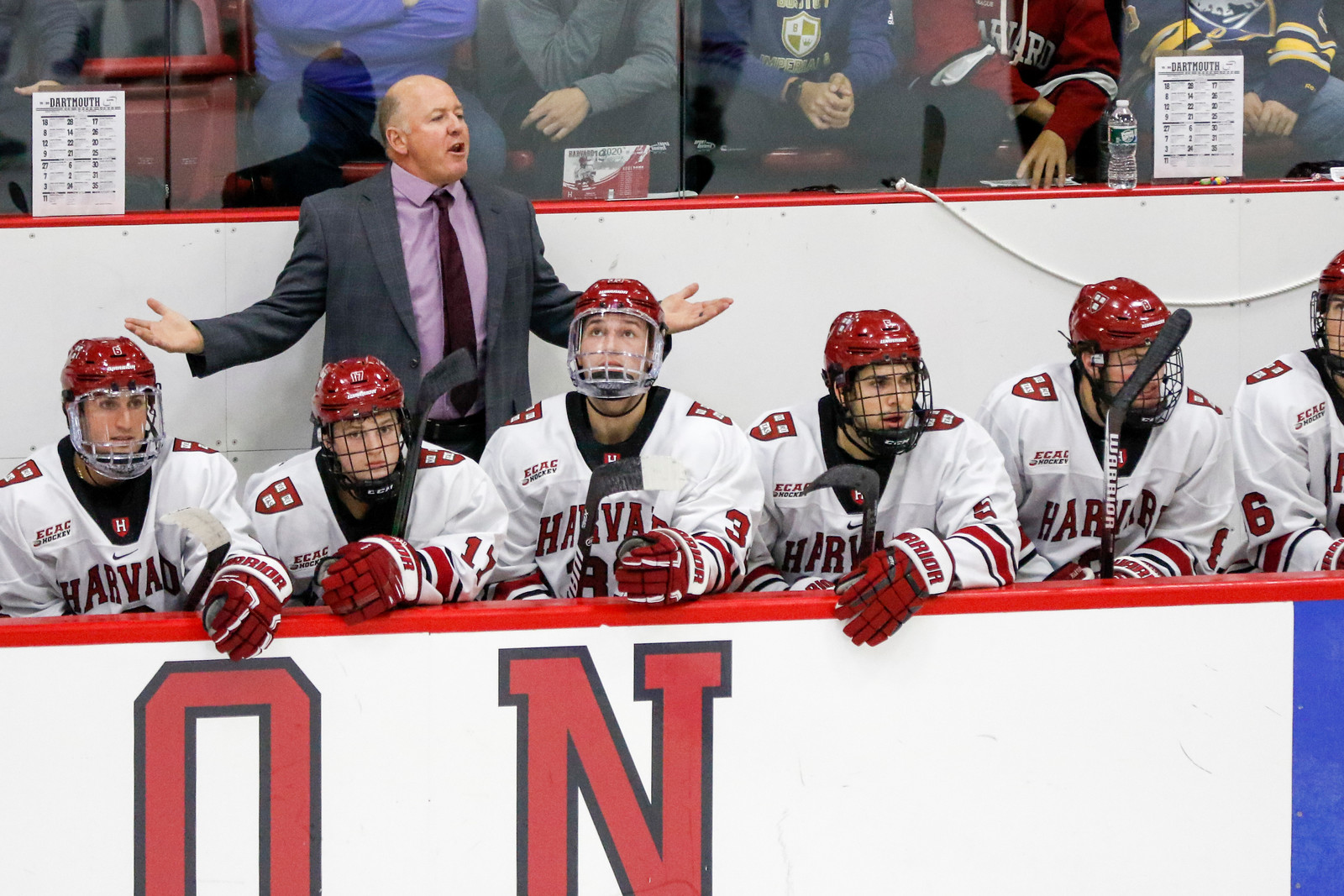 The Crimson will look to rebound from its first defeat of 2019-2020 with a mid-week matchup at Boston University on Tuesday. By Timothy R. O'Meara
By Spencer R. Morris, Crimson Staff Writer

Through the first four weeks of the season, the No. 9/6 Harvard men’s hockey team skated to its best ever start, rattling off six straight victories. In Friday night’s home tilt against No. 14/12 Boston College, the Crimson was well-positioned to extend its unblemished record — but a two-minute span late in the second period changed everything.

“The game’s got to come down to that minute and 50 seconds where we got the three goals in the second period,” BC coach Jerry York said. “We’re down, 2-0, and we just kind of caught fire…. Our penalty killing, the two-minute span in the second, that was a pretty thorough game by us. I thought in all three zones, we played very solid.”

With under three minutes to go in the second, Harvard sophomore Jack Drury punched home a powerplay goal, receiving a pass in close from classmate and blue-liner Jack Rathbone before opening up to the net-mouth and roofing the puck. The Crimson appeared to be heading into the intermission with a 2-0 advantage, threatening the Eagles’ own six-game winning streak.

BC had other plans, however, and immediately got to work trimming the deficit. Mere seconds after Drury’s tally, junior forward Jack Badini, scorer of Harvard’s first-period goal, headed to the box for a tripping infraction. On the ensuing faceoff in the Crimson’s zone, Eagles forward Logan Hutsko fired a hard pass to the slot, where fellow junior Aapeli Räsänen redirected it past Harvard goaltender Cameron Gornet.

The primary assist extended Hutsko’s point streak to nine, while Räsänen notched his fifth multi-point outing of the season. The scoring play also sparked a comeback rally for BC, which concluded before the period horn.

On a seemingly contained transition play, Eagles rookie forward Mike Hardman threw a puck toward the goal from a sharp angle. Gornet attempted to snuff out the danger but instead directed a rebound into the slot with his stick. Freshman Alex Newhook was there for the visitors to bury the chance, evening the ledger at 2-2.

“They’re a good hockey team,” Harvard coach Ted Donato ’91 said. “We knew they were going to make a little bit of a run. We have to be able to manage that situation and kind of get the ship back in the right direction.”

After mustering a meager three shots on goal in the first frame, BC’s offense was roaring. Two shifts after Newhook’s tuck came the Eagles’ third strike in two minutes. A cross-ice dump-in allowed BC to change lines while senior Graham McPhee fetched the puck in the right corner. McPhee found forward Julius Mattila, fresh off the change, with a centering pass. Mattila slipped the puck across the slot to David Cotton, whose quick forehand-backhand deke beat Gornet. And just like that, the Eagles had stolen the lead, and the game, from the Crimson.

Harvard had multiple opportunities to knot the score in the third period. BC took three penalties in the final 20 minutes, gifting prime chances to equalize to a Crimson powerplay with formidable weapons. But the hosts failed to find twine.

Cotton, after seizing the lead for his group in the waning seconds of the second period, was whistled for a slash just 20 seconds after the opening faceoff of the third. While Harvard loomed on the ensuing man advantage, it did not make the Eagles pay for their captain’s infraction.

The Crimson’s next man-up chance came in the middle of the frame, but it proved to be catastrophic. Not only did Harvard come up empty on the powerplay, but BC countered with a shorthanded goal courtesy of sophomore Marc McLaughlin, boosting both its lead and its morale. The man-down tally stretched the score to 4-2, where it finished.

“They end up with a powerplay goal and a shorthanded goal,” coach Donato said. “The goaltender made four or five saves at important times, and that’s the difference in the game.”

For most of the contest prior to the Eagles’ key second-period rally, the Crimson was able to contain the BC offense. Gornet (4 GA, .857 SV%) was scarcely tested early and made multiple crucial saves, yet he suffered his first loss of the season. Staring down the ice at Gornet was freshman net-minder Spencer Knight (2 GA, .931 SV%), a first-round draft pick of the National Hockey League’s Florida Panthers organization.

On Friday evening, the highly touted backstop added to his impressive campaign, ranking just outside the national top 10 in both goals against average (1.92) and save percentage (.934) for the year. Coach Donato’s group will be wary of Knight’s stout play between the pipes and the Eagles’ quick-strike ability, should the teams meet again in the second week of February’s Beanpot Tournament.

“This is a terrific series over the years,” coach York said. “Having played in it myself and then coached, the BC-Harvard matchup to me is kind of electric. I thought the crowd responded tonight…to see two good teams play. We both play the right way: we’re quick, we make plays.”

Harvard will have little time to dwell on its first loss of the 2019-2020 slate, as it clashes with another Beantown rival in Boston University on Tuesday. The stretch of high-profile matchups continues three days later, as historic rival No. 2 Cornell visits the Bright-Landry Hockey Center. A top-10 team heading into Friday’s loss to BC, the Crimson now faces a critical opportunity to validate its place among the NCAA’s top programs.

“When you play against good teams, there are more momentum shifts,” coach Donato said. “I thought it was a good crowd today. We hope to be in those types of situations where we’re playing against good teams with a lot at stake and good crowds. We’re a young team, and I thought [BC] pushed us in some areas that we needed to be pushed to get better.”