Why 'Avatar: The Last Airbender' Is Better Than Any Other Children's Show 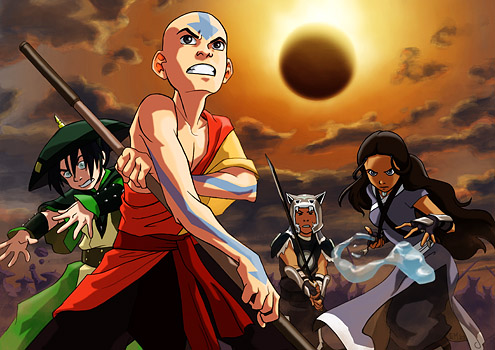 "Avatar: The Last Airbender" reckoned with grown-up themes in a child-friendly package. By Courtesy of Viacom/Nickelodeon
By Joseph P. Kelly, Crimson Staff Writer

Children’s shows usually fall into one of two categories: educational or entertaining. Some incorporate aspects of both paths, but in the broadest sense, any show can be defined as more one than the other. Shows that attempt to effectively balance the two objectives often end up compressing “important” storylines to maintain engagement. For example, children’s series like “Drake and Josh,” “Suite Life of Zack and Cody,” and “iCarly” all attempted to tackle important topics before wrapping them up in a neat bow without establishing any significant or meaningful long-term storylines.

These shows’ creators aim to entertain with serialized fiction that relies upon underdeveloped character tropes, and most of the plotlines’ educational aspects don’t last. On the other side of the spectrum, shows like “Sesame Street” and “Schoolhouse Rock!” intend to educate, but fall short of entertaining anyone over the age of six years old.

There aren’t many children’s shows with the emotional and intellectual depth that children should be exposed to. Shows like “Spongebob Squarepants,” while entertaining, do nothing to engage young audiences with any emotional or intellectual stimulation. Once children grow too old for overtly educational shows like “Blue’s Clues” and “Sesame Street,” they encounter shows whose creators stop trying to insert important storylines altogether. What’s missing are children’s shows that entertain while still teaching important life lessons. This is where “Avatar: The Last Airbender” excelled.

“Avatar,” which celebrated its 15th anniversary on Feb. 21, created characters and storylines that were far more complex than the shows it competed with. The show had important messages to convey, and it did so in a captivating and substantial way. First and foremost, the animated series depicted several characters of color while respecting the cultures that those characters came from. Though obviously influenced by anime styles, this cartoon is grounded in its nuanced depictions of East Asian and Inuit cultures.

Beyond exposing young and impressionable American audiences to a uniquely diverse cast of characters, “Avatar” created a somewhat mystical elemental bending system that was represented as a spiritual and cultural phenomenon rather than a generic set of superpowers. The show introduced a tyrannical ruler and generated vehement opposition towards this ruler throughout its three seasons, but in the end, the series still focused on the importance of peace, redemption, and respect for all forms of life. The show’s main character, Aang, repeatedly emphasizes how important it is to remain peaceful in the fight for peace.

The show featured some single-episode storylines, but each episode still motivated the show’s overall progression — no episode was unimportant in terms of story or character development. Speaking of character development, “Avatar” created one of the most surprising, authentic, and compelling examples of a redemptive character arc in its main villain, Zuko, who changed his ways and ultimately helped to dismantle the tyranny he once exemplified.

“Avatar” also featured several powerful female characters, some of whom were stereotypically feminine and some of whom were not. The show’s danger had real and intense stakes — some characters were even killed. Even so, it remained child-appropriate and light-hearted in nature whilst balancing these difficult and important topics. There was humor and levity that made the characters likeable, but this did not detract from the more intense aspects of the very same characters. This show stands out in the lineup of children’s television for the thought and effort put into creating something important and entertaining for both children and their parents.

Many who watched “Avatar” as children are influenced for life by its messages and themes. The complexity of this show rivals the genius of “Harry Potter,” but all within the context of a children’s television program broadcasted alongside series as inane as “Spongebob Squarepants.” “Avatar: The Last Airbender” should be considered the greatest and most important work in all of children’s television.

— Staff writer Joseph P. Kelly can be reached at joesph.kelly@thecrimson.com.