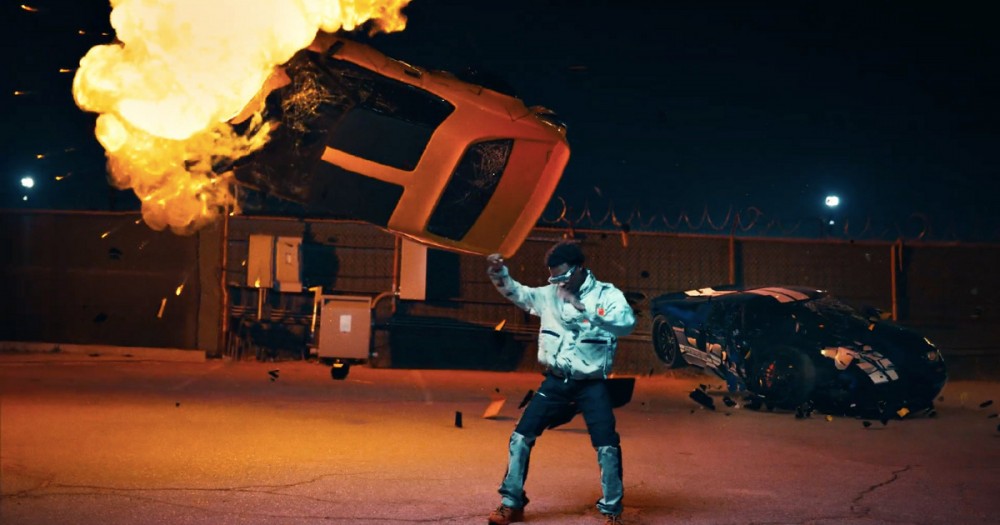 Roddy Ricch in his new music video for "The Box." By Courtesy of Roddy Ricch/VEVO
By Jacob R. Jimenez, Crimson Staff Writer

As Roddy Ricch’s hit song “The Box” entered its 12th week at No. 1 on the Billboard Hot 100, the rapper finally premiered his official music video on YouTube last Friday, Feb. 28. Through a hodgepodge of action scenes, the video reflects the classic and contemporary hip-hop themes of Ricch’s song. With over 22 million views on YouTube already, the new video could give “The Box” the surge it needs to contend with Lil Nas X’s 17 week No. 1 Billboard record “Old Town Road” for longest No. 1 streak.

The video opens with someone spray painting a street race starting line on the concrete as muscle cars rumble and “The Box” spans the screen in a slim graffiti font. Ricch pulls his car into the frame and the song’s legendary, squeaking intro commences. As a stereotypically seductive flag girl starts the race, the verse begins. In contrast to Ricch’s chill, measured flow, the video cuts quickly between shots to better match the intensity of Ricch’s lyrics.

Much of the video is a visual representation of the rapper’s best lines. Ricch sings, “I done put my whole arm in the rim, Vince Carter” while elbow deep in a basketball hoop. A luxury duffel is pulled out of a muddy hill as “I got it out the mud” beats in the background. Ricch says “I’m a 2020 president candidate” while standing in front of a faux White House press curtain.

The short action shots are accentuated by some gaudy CGI effects. At one point, the camera pans around Ricch as he stands horizontally on the wall of a burning building. While not exactly Oscar-worthy, the graphics deserve recognition for pushing the hip-hop genre into an even more fantastical representation of Ricch’s lavish lifestyle.

Ricch’s video also pays homage to classic hip-hop gangster tropes with specific references to gang violence and drug deals in popular culture rather than just generic call-outs to money, fame, and women. He honors Scarface’s last stand and gives further recognition to the past with the line “we been trappin’ like the 80s.” With these artistic nods, Ricch really “won’t never sell [his] soul” to viral stardom and proves that he can back up his boastful claims.

In the end, the action-packed video doesn’t quite break new ground for visual hip-hop artistry. But with its CGI flourishes and the sustained fame of the song, it's still worth a view. Stick around to the end and you’ll be rewarded with an eerie, deeper look into the metaphor of “The Box.”

— Staff writer Jacob Jimenez can be reached at jacob.jimenez@thecrimson.com.