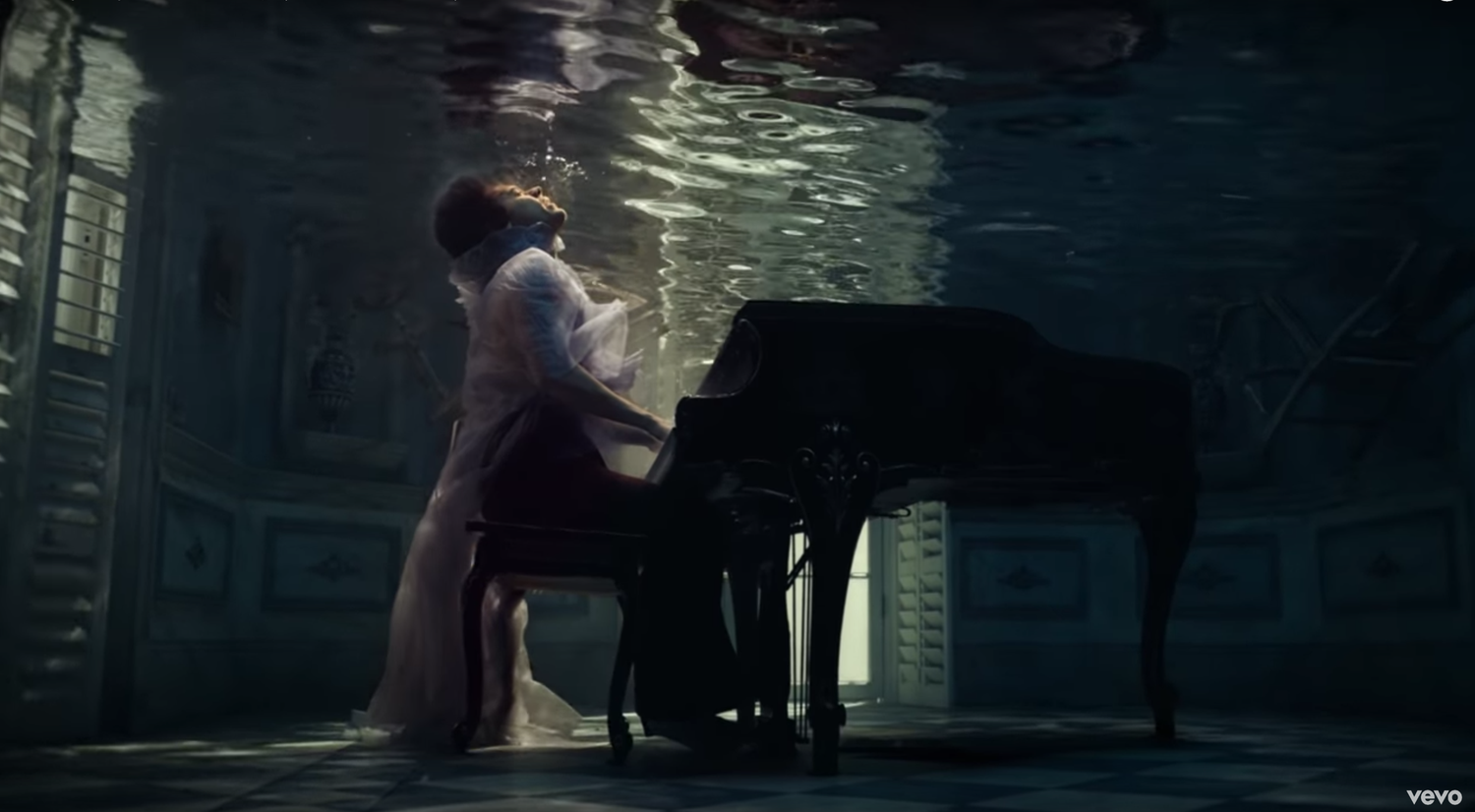 A scene from 'Falling' by Harry Styles. By Courtesy of Harry Styles/YouTube/Vevo
By Sofia Andrade, Crimson Staff Writer

On Feb. 28, Harry Styles released the video for “Falling,” the fourth single from his 2019 album “Fine Line.”

The video starts with a black screen that cuts to Styles, soaking wet and barefoot on the floor of a flooding room. The setting looks straight out of a museum, with the room’s marble decor and a single large Victorian-style window flooding the room with light. As the song’s piano melody continues, the video jumps to Styles playing the tune on an elaborately decorated piano, as the camera pans from his golden drink to the chunky golden rings stacked on his fingers.

Fans have long speculated that the song is about Styles’ ex-girlfriend Camille Rowe, and allusions to Rowe fill the video. The Eiffel Tower’s silhouette just visible behind the window reflects her French heritage, and the ruby ring he wears on his right pinky finger, according to fans, has been previously spotted on Rowe.

Styles stops playing only to cradle his drink, as he sings about having “no one to blame but the drink in [his] wandering hands.” As he plays, the water-filled piano begins to overflow with every note. The more he continues, the more the piano begins to spill water from its interior, yet Styles remains seemingly unaware. Not allowing the flooding room to move him from his post at the piano bench, Styles continues to play as though his life depends on it, and for a second it seems like it does. As he sings the song’s emotional chorus, his gaze never leaves the camera, giving Styles the appearance of aching for an answer to his pain — or perhaps recognition of it. “What if I’m someone I don’t want around?” he sings, as his eyes scan his audience.

The video is characterized by these intimate close-ups of Styles as well as by wide shots of the flooding room, as golden sunlight fills it from behind the piano and the ornate chandelier hanging above. From his spot at the instrument, Styles’ lilac chiffon Gucci dress is on full display, with the dress’s six-foot train trailing behind him.

As the song crescendos towards its peak, the water begins to fall more and more violently from the top and sides of the piano, his emptying drink unmoved from its spot next to the piano’s music stand. As Styles pours his feelings into the instrument, the instrument returns them in the form of a flood, bubbling up from its insides.

The dress’s six-foot train begins to float up as Styles continues singing, stopping only for one moment to look up and cry out that he’s “falling” before the water completely submerges him. The room, now completely flooded, is reminiscent of a Brett Stanley photograph, as the sunlight breaks through the water in rays that illuminate the room’s ornate décor. Through all this drama, Styles keeps playing, contemplating the water that has surrounded him as his hair and dress float away.

The piano bench floats and, eventually, so does he. “I’m falling again,” Styles sings as he rises up with the water, only to quickly sink back down — effectively trapping himself in his own emotions. The confident stares to the camera are replaced by an unmistakable sadness. The video ends with Styles seemingly dejected by the place where his emotions have left him stranded: underwater and with nowhere to go. He begins to cry, though his state is evident only by his quivering lips and chin, his tears made invisible under the still-rising water. As he finally begins to look up, the camera cuts away and we leave Styles as we started: with a black screen and a piano melody.