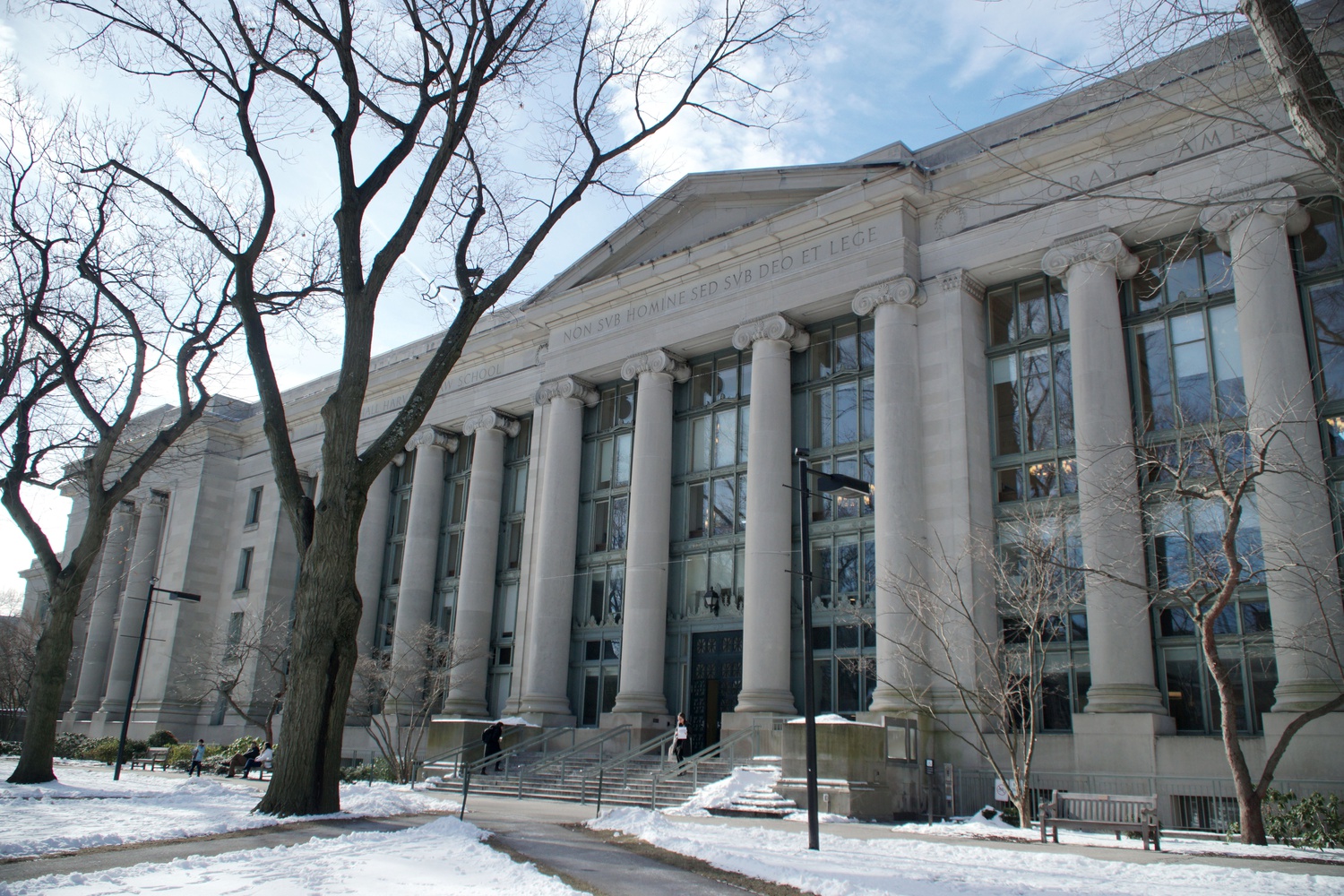 The Law School announced Mar. 16 that it would adopt a credit-no credit optional grading policy for the Spring 2020 semester. By Allison G. Lee
By Kelsey J. Griffin, Crimson Staff Writer

More than 100 third-year students signed onto the Wednesday letter, while the First Class Law Students Association, joined by 30 student groups and 700 students, submitted the second on Thursday.

According to the letters, the Law School announced Mar. 16 that it would adopt a “credit/no credit optional” grading policy for the Spring 2020 semester. The letters acknowledge that this change aims to help students who face challenges studying off-campus.

“As a result of this health crisis, our most marginalized students are now navigating unstable or unsafe living conditions, food scarcity, and new familial obligations,” the Thursday letter reads.

But the letters argue that the ability to choose whether or not to continue using a letter grading system will disproportionately harm students whose living conditions force them to opt for credit/no credit grading.

“The policy rewards students not on the basis of merit, but rather on the basis of how much normalcy they will be able to maintain at this moment,” the Wednesday letter reads. “It serves to benefit those who are able to put their head down and treat this just as they would any other semester, something we know is not possible for many of our students, particularly low-income students, students of color, students who are parents, and others.”

“Within hours of the policy change, its disparate impact became apparent,” it reads. “Students with the luxury of having time and capacity to immediately consult with school officials were discouraged from taking advantage of the new option.”

Law School student Juan Espinoza — the First Class Climate Director who helped draft the letter — said the opt-in system might reflect poorly on disadvantaged students when they are searching for employment.

“I think opting for credit/no credit versus a grading system does send a sign to whoever reads that transcript, especially if they know that they had the opportunity to either receive grades or not,” he said in a Thursday interview. “If this policy is to stay in place, the employers will know that some students have grades and some students do not have grades.”

The Thursday letter addressed this concern, claiming that opting for credit/no credit grading would be perceived as a sign of a lack of effort.

“Students who have readily relied on their tenacity and grit are asked to predict whether their acquired resilience will be enough to achieve desirable grades, or else calls upon them to combat a pervasive presumption that they ‘took the easy way out’ by electing to take their courses credit/no credit,” it reads.

Asked for comment on the letters, Law School spokesperson Jeff Neal wrote in an emailed statement that administrators are currently reviewing input from many students who support or dislike the optional policy.

Both letters call for the Law School to establish a uniform credit/no credit option, which they claim would take the pressure off of disadvantaged students and make all transcripts equal in the eyes of employers.

“By implementing a mandatory credit/no credit system, not only will Harvard Law School affirm the value of its most vulnerable students to employers, it will also protect the students who are not yet aware of the hardships this crisis may bring,” the Thursday letter reads.

Espinoza reaffirmed that a mandatory grading policy would alleviate the concerns of the student organizations who penned the letter.