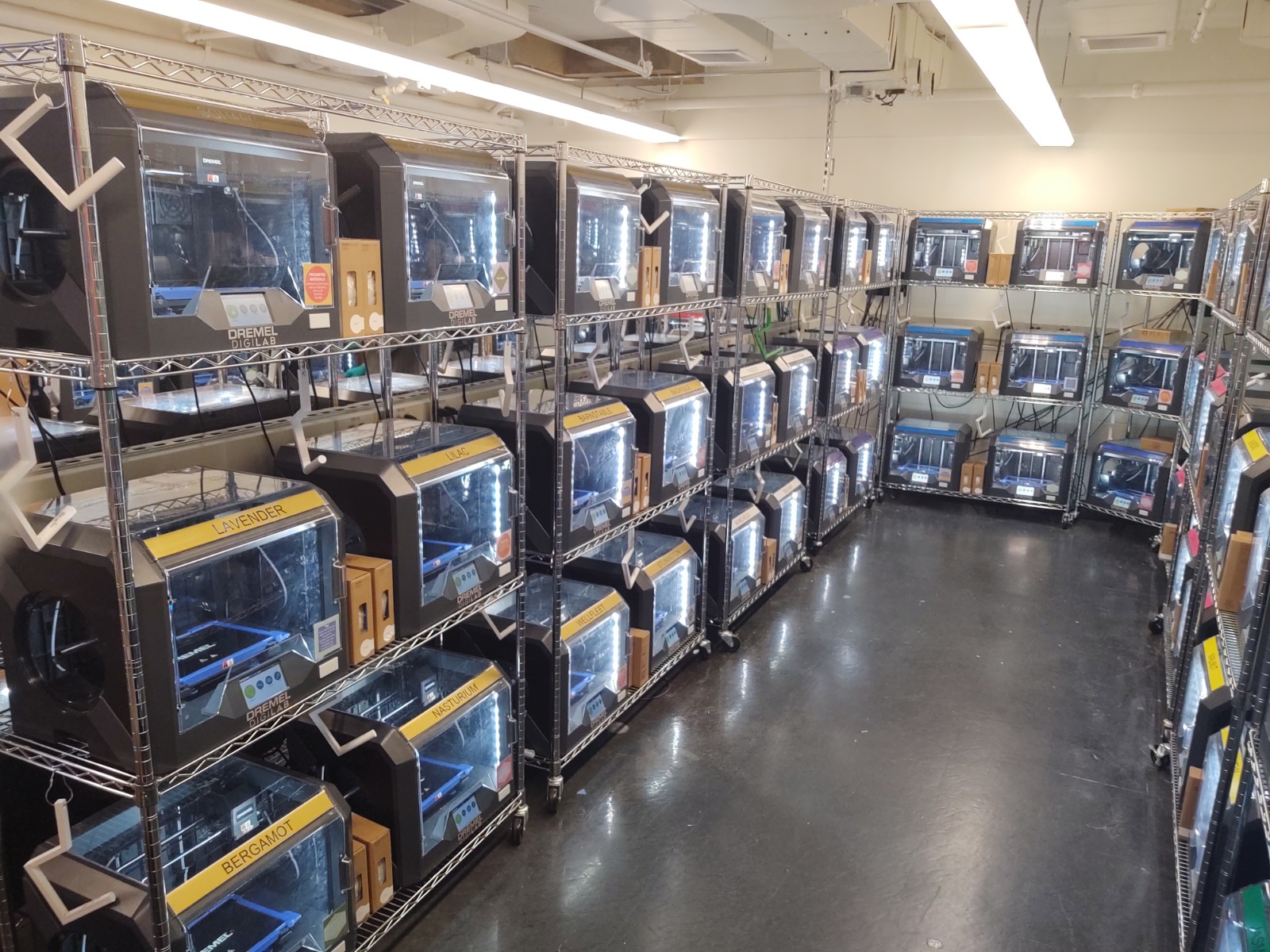 Hӧweler believes that the lab’s set of 150 3D printers will “patch a gap that is painfully obvious in hospitals.”
Advertisement
Advertisement

From Prototypes to PPE

In light of COVID-19, the Harvard Graduate School of Design has begun to use “The Fabrication Lab” to help create personal protective equipment (PPE) out of new materials.
By Benjamin F. Chang and Saima S. Iqbal

When Christopher R. Hansen swipes into Gund Hall each morning, he is one of only a handful of people to enter the building. Aside from the occasional footsteps of a security guard or custodian, all he hears is the whirr of the dozens of 3D printers in the Fabrication Lab. Since the start of April, his new routine has consisted of slicking on gloves, reprogramming the printers there, and delivering the products to a loading dock in Longwood.

As a Digital Fabrication Technical Specialist, Hansen trains students to use the lab’s digital tools for prototyping. In recent weeks, he’s taken on a different project: helping the Graduate School of Design produce personal protective equipment for local hospitals.

The GSD’s efforts began as a response to Massachusetts General Hospital’s call for masks, gowns, and respirators. Speaking on NBC in mid-March, the president of MGH said the hospital was “desperate” for shipments and urged companies with 3D printers to start manufacturing masks that afternoon. This call-to-action led many GSD students to contact Stephen M. Ervin, the assistant dean for information technology, about using the Fabrication Lab’s own fleet.

At Ervin’s approval, the lab joined the Massachusetts General Brigham Center for COVID Innovation, a consortium of Boston-area groups working to combat shortages in medical supplies. According to Hansen, MGB committed to making their designs “open-source,” meaning that anyone can use and distribute them. The MGB Center provided the Harvard team with an approved design for a face shield: Pinned to each thick, white visor is a curved, chin-length sheet of polyethylene terephthalate glycol. he shield not only protects its wearers’ faces from infectious droplets but prevents contamination of precious N-95 respirators, which are low in supply.

Eric Hӧweler, an associate professor of architecture who helps advise the Harvard team, says the design is clever because of its simplicity. The shield relies on a cheap, common plastic sheet that can be bought at Staples and sterilized with alcohol.

Within two weeks, the face shield passed clinical safety tests at Brigham and Women’s Hospital, Harvard administrators approved use of the Fabrication Lab, and the team began printing hundreds of visors and shields.

Since April 5, the GSD has produced 3,500 visors and 1,000 shields using rolls of plastic filaments found in the lab.

But the GSD is unlikely to produce more shields, as it will soon run out of its stock of PETG. As Ervin explains, many universities, hospitals, and companies are driving up the demand for the material, just as the MGB Center predicted, making it difficult, if not impossible, to acquire more.

Until the consortium finds another supply, the team will focus on a second product: a novel 3D printed intubation hood.

Hansen is excited to show us prototypes of the hood, which shields doctors from contact with viral particles their patients may emit during intubation. He screen-shares slides over Zoom detailing the many iterations the design has gone through, starting with a clear plastic box with two holes and ending with an accordion-like cover that extends over the patient and retracts when not in use.

Hospitals are in need of intubation hoods that can be implemented as early as April 18 — a remarkably quick turnaround, Hansen says. He explains that the team is working on a “quick and dirty solution” for next week and a “more refined solution for further down the road.”

According to Hӧweler, team members are designing in two weeks projects that they would likely have spent two years on under more normal circumstances; they constantly exchange feedback on prototypes in Slack channels and Zoom calls.

Without modern technology like 3D printing and online communication, the GSD’s efforts would have been impossible. The ability to share designs and work together virtually has changed the process of creating designs, allowing frequent collaboration between clinicians, architects, and engineers.

Hӧweler believes that the lab’s set of 150 3D printers will “patch a gap that is painfully obvious in hospitals.” Nonetheless, he expects the GSD’s production of PPE to be “a one-time thing.” While industrial processes can create 1000 face shields per hour, a 3D printer can only create one shield every seven hours. Despite this disparity, he is inspired by the way people have been coming together to do their part amidst the crisis.

“Hundreds of people have their own 3D printers, and they’re printing and donating,” he says. “It’s a fantastic story. It means that we can make a difference.”

— Staff writer Benjamin F. Chang can be reached at benjamin.chang@thecrimson.com.