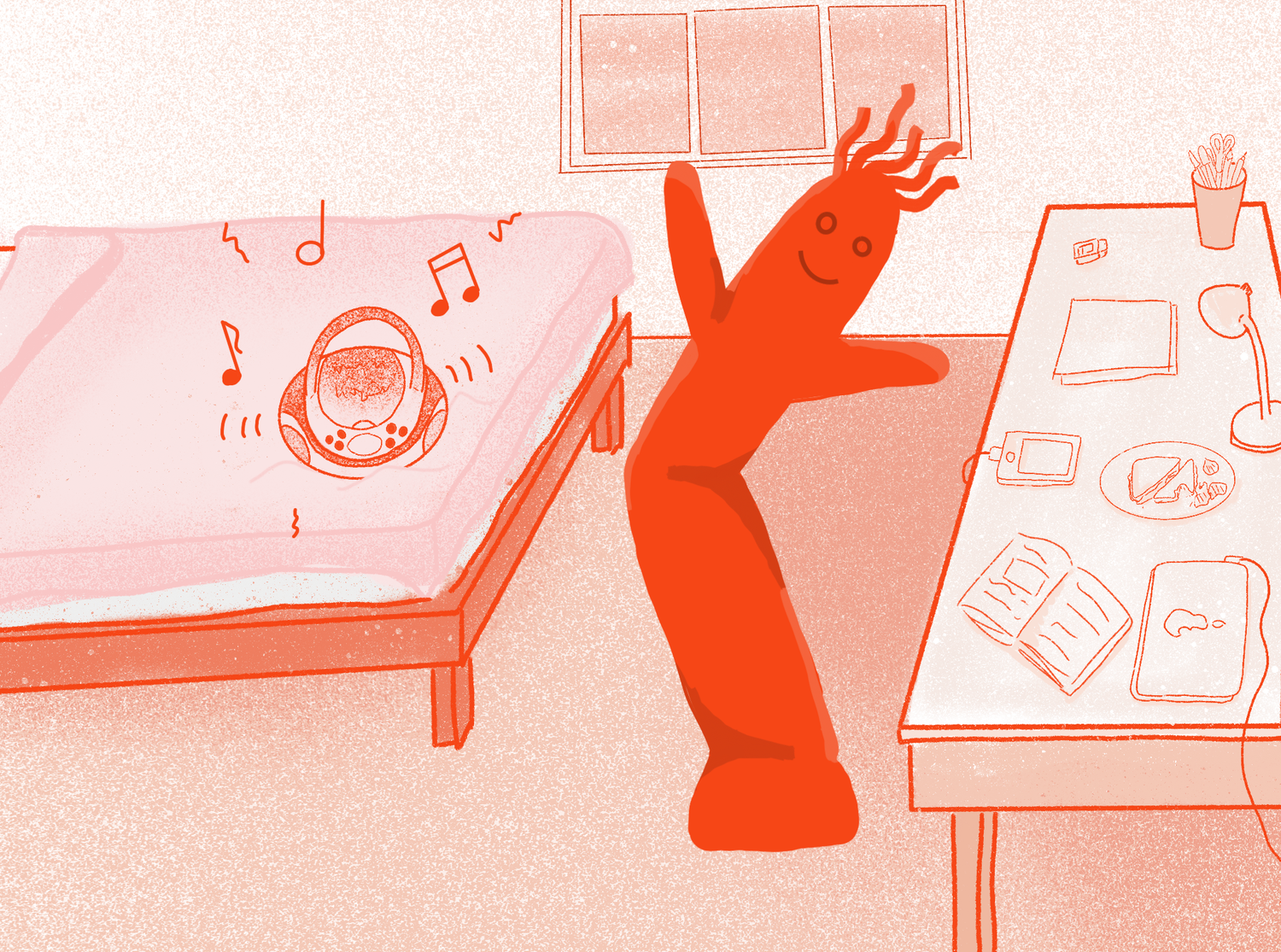 I’ve long been a proponent of bedroom dancing. It’s easy: Play music as loud as you can and start jumping, flinging your limbs outward.
By Olivia G. Oldham

I hold the frail, ringed fingers of the gray-haired woman to the left to me; my other hand sweats in the warm grasp of the person to my right. We smile at each other sheepishly, waiting for the klezmer to start.

As the crowd forms a half-hearted circle, I study the room: a square dancing skirt worn for the occasion; a man with an arched back clutching the hand of a college student with shorn hair; a plethora of name tags scrawled with they/them pronouns; my friend Saul speaking, armed with a semester’s worth of Yiddish, to the person on his left. At the sound of the clarinet, we pick up our feet, heading to the right. We stumble over our socked toes as we are instructed to shuffle and sidestep. In the corner, two flannel-wearing men concentrate on their accordion and clarinet, the klezmer seeping into the walls of the Boston Workers Circle.

My foray into Yiddish folk dance began on a rainy November night. Saul and I missed the first 66 Bus and arrived late; I probably had to be convinced to go, worn out on a Thursday and wary of the trek to Brookline. We arrived in the warmth of the Workers Circle, which has the feel of a renovated rec center: yellow hardwood, fresh paint, walls papered with drawings by the afterschool kids. A red pennant hung on the wall, a vestige of the Circle’s heyday as the center for Jewish life in Boston in the early 20th century. Other attendees began to file in, leaving their dripping raincoats by the door, inking name tags, introducing themselves. Some were elder members of the community, mainstays of the Circle; others were recently graduated college students who’d found out about the Circle from its “raucous & radical” Purim party, Gragger.

Saul and I had come to the class on the recommendation of our Yiddish professor, who arrived armed with dance shoes and shalom aleichems for many in the room. I felt shy among this crowd, but Saul, ever-gregarious, began to strike up a conversation with an elderly classmate about her family’s Communist roots. The room quieted as Adah Hetko, a local klezmer and Yiddishist, herded us together. In choreography derived from leftover traditions, she guided us in our first freylekh, a simple circle dance. My shyness loosened; I fell in line with the music. Each of us carried the other, leading and following in a chain. Around 10 p.m., sweat breaking on my brow and cheeks pained from smiling, the class ended. Saul and I stumbled out into the damp night laughing, giddy from endorphins.

I’ve long been a proponent of bedroom dancing. It’s easy: Play music as loud as you can and start jumping, flinging your limbs outward. I began this practice in middle school, when I’d come home from sixth grade and blast the Yeah Yeah Yeahs on my CD player, expelling my 11-year-old angst alongside Karen O’s shrieks.

At 11, I spent a lot of time seeing myself through the eyes of others; this is the nature of tween insecurity. Bedroom dancing is designed to get you out of your head and into your body. This notion — that moving your body is a good way to release anxiety — might be obvious to athletes or, I suppose, people who have exercised more than once. I do not count myself among those people. But I get the sense that there are rules to sports and to exercise at large: ways to do it right and ways to do it wrong, ways to improve. Such standards do not exist in bedroom dancing. The only rule is to feel good while doing it.

Bedroom dancing has one shortcoming: You dance alone. This can be good. You don’t dance like nobody’s watching; rather, you dance and nobody’s watching. For many years, I had no reason to dance with an audience. Then, seventh grade arrived, and I was compelled toward another variety of Jewish dance floor: that of the Bar Mitzvah. This was a terrifying prospect for 12-year-old me, who danced comfortably in her bedroom precisely because it was beyond the gaze of her peers. Suddenly my Yeah Yeah Yeahs dance moves were transplanted to the soundtrack of Macklemore and Lupe Fiasco, and I was wildly uncomfortable: Thrashing and jumping does not a cool girl make.

Yet by the time I arrived at college, I was a dancing evangelist, eager to spread the word. In high school, I realized that among friends, I wasn’t so self-conscious. Dancing comes easy when you’re with those you feel comfortable around — I ask only for a group of friends eager to look ridiculous. Among the strangers at the Workers Circle, I was out of my element.

Dancing requires a level of surrender. I, at least, cannot account for what my body will do or how it will appear: whether I will look graceful or goofy, deliberate or clumsy. To dance with other people guarantees openness, some amount of trust. This openness comes from giving yourself up to the music, to the room, to the inherent fun of moving your body. When we are less self-conscious, we connect with others.

At the Workers Circle, I surrendered myself to dancing. By doing so, I hoped the room would be closer for it — and it was. Each person offered themselves as they were, with weak knees and bad rhythm and uncooperative limbs. By the last class, we hadn’t improved much as dancers, but all self-consciousness had dissolved.

This closeness and community has significance. If we don’t dance in the tradition of Yiddish folk, if we don’t enliven it with our poorly coordinated feet and animated ‘shining,’ the tradition may perish. And the reason we carry it on is the same quality that saves it: this feeling of closeness, of community, of remembrance, recalling the joy our dancing-forebearers might have felt in the shtetl, dancing the same dance.

On a recent Friday evening, in the thick of social isolation, I found myself in an utterly 2020 community: a Minecraft concert, titled Square Garden, held by the electronic duo 100 gecs. They’d created an elaborate castle-garden landscape to stage the virtual concert, whose headliners included Kero Kero Bonito and Charli XCX. At the center of this moonlit fortress sat a virtual stage, accompanied by a virtual mosh pit, where pixelated avatars collided in an attempt to simulate moshing. You might think moshing, with its intense proximity, would be the ultimate form of togetherness in dance. In a mosh pit, one embraces the sweat and the elbows of a crowd, allowing strangers to propel them toward other strangers. The downside of this, though, is often a male-dominated context where those with the most body mass reign.

On that Friday night, I imagine I danced in a way that trumped moshing in terms of intensity, vulnerability, and — dare I say it — sheer thrill. On a Zoom call with three of my friends, we watched the concert. And we danced. To an observer, each of us would have appeared to jump silently, awkwardly, alone in our rooms. But in this strange virtual realm, we sacrificed the solitary comfort of bedroom dancing, finding something closer. 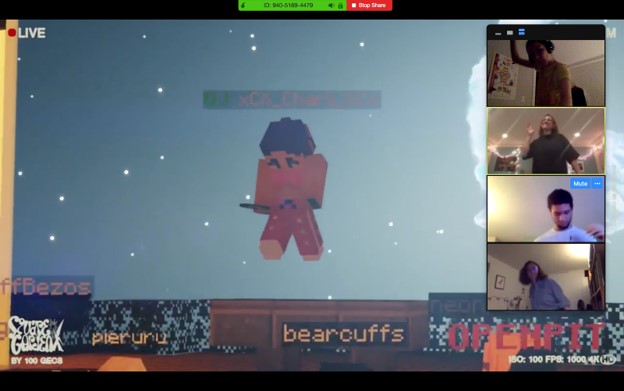 "In this strange virtual realm, we sacrificed the solitary comfort of bedroom dancing, finding something closer." By Courtesy of Olivia G. Oldham

—Staff writer Olivia G. Oldham can be reached at olivia.oldham@thecrimson.com. Follow her on Twitter at @allpalaver. This is the second installment of “Recess,” her column about play.