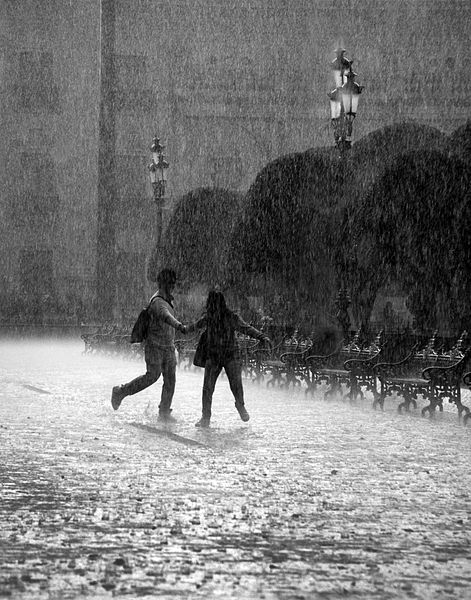 These songs will get you through a rainy day. By Courtesy of Tomas Castelazo, www.tomascastelazo.com / Wikimedia Comm
By Nina M. Foster, Contributing Writer

Despite the ubiquity of the saying “April showers bring May flowers,” we all know that there are still plenty of rainy days in May. Happy songs might help to boost our mood, but the urge to listen to music as grey as the sky outside is simply irresistible. As we’re stuck in isolation and preparing for finals, sometimes we just need a moment to step away from our screens and sit at the window, getting lost in the showers. Missing sports? Watch a riveting race between two raindrops sliding to the bottom of the windowsill. Having another quarantine meltdown? Put on your best brooding face and pretend to be one of those movie characters who looks out into the rain, contemplating every choice they’ve ever made. This playlist is the perfect soundtrack to accompany these moments of escape, featuring ten mellow songs that range from cathartic to calming. Cozy up, make yourself a cup of tea, perch yourself next to a window, and enjoy.

Ready to dive straight into the emotional deep end? Let’s start with the saddest song on The 1975’s album, “A Brief Inquiry into Online Relationships.” The instrumentals are sparse, with just guitar and interjections of piano accompanying Matt Healy’s beautifully raw vocals. Throughout this song about the guilt that comes with figuring out young love, it feels like Healy is singing straight into your soul.

“Slow it Down” by The Lumineers

Now that Healy has set the mood, it’s time for The Lumineers to maintain the melancholy. Wesley Schultz’s voice embodies the ache of growing apart from a lover, as he begs his partner to come home and rest. While she refuses, we can embrace the feeling of grogginess that comes with the rain and allow ourselves to slow down.

“Visions of Gideon” by Sufjan Stevens

It’s no surprise that this song was chosen to accompany the heart wrenching ending of “Call Me by Your Name.” Listen to it. Feel it. Be Timothée Chalamet, but instead of crying as you look into a fireplace, cry as you stare into the grey outdoors.

By the end of this song, Odell’s heart won’t be the only one that’s broken. His articulation of a doomed romance will leave you in tears, the song only made more emotional by his heartfelt belting and the climactic swell of percussion and saxophone.

Although the guitar driving this song seems lighthearted and upbeat, the lyrics tell a painful story of the breakup between Styles and ex-girlfriend Camille Rowe. It’s the perfect combination of sad and soothing, bound to inspire a (slightly depressing) walk down memory lane.

It’s easy to feel more isolated on days when going outside isn’t really an option. Webster excellently voices this feeling of loneliness with her wistful tune, fit for a pensive state of mind.

“Standing in the Rain” by The Paper Kites

Standing in the rain is not recommended, but recognizing and allowing yourself to feel any frustrations that you have with the world is a must. The Paper Kites’ transcendent vocals validate the feelings of sorrow that uncontrollable circumstances bring, with lyrics like “Don’t take shelter stand in the rain / It’s meant to feel that way.”

Now it’s time for a sweeter tune — the hug that everybody needs, offering warmth and coziness on such a rainy day. Put down your tea, grab a nearby person or pet, and slow dance in the living room, basking in Hozier’s rich voice and tranquil melody.

“Grow As We Go” by Ben Platt

Another song fit for a slow dance, Ben Platt’s “Grow As We Go” lightens the mood even further, with soft guitar and effortless, dreamlike vocals. Platt will take you on a wholesome journey of finding someone with whom you can grow and learn, reminding you to be grateful for the supportive people in your life.

Hopefully this playlist gave you a moment to escape the stress of COVID-19 and all of its consequences, even if it meant plunging into a sea of dreary songs. Hush Kids end everything on a brighter note with uplifting harmonies and a cheerful tempo. Take a deep breath and soak in the musical sunshine. You got this.