During the Coronavirus Pandemic, Town and Gown Cooperate 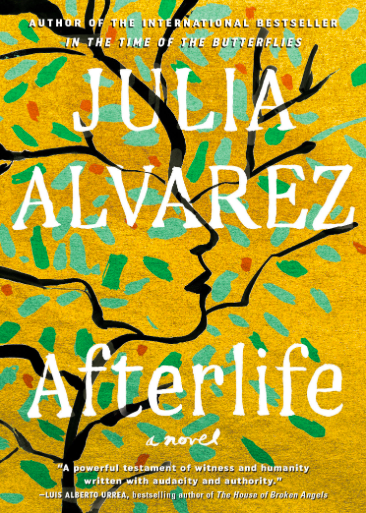 People live on in memories. For Antonia, the narrator of “Afterlife,” her husband Sam maintains a strong presence in her life a year after his passing. Though he is no longer physically present, he is as real as any other character in the book: Antonia finds her choices and thoughts shaped by her memories of him and his beliefs. In fact, it is the thoughts and ideas from the past that loom the largest in this novel. Antonia is a retired English professor who holds cherished lines from the “old masters” in her memory, weaving a safety net from the wise, trusted scraps of literature that guides her through difficult times. “Afterlife” is a graceful, reflective depiction of grief, duty, and love that provides comfort and needed advice for trying times — that one should do what’s right, but it’s okay to do only as much as is possible.

This highly anticipated novel is the first in many years from celebrated writer Julia Alvarez, the Dominican-American bestselling author of “How the Garcia Girls Lost Their Accents” and “In the Time of Butterflies.” Alvarez has received critical acclaim for her graceful and careful narration of Latinx stories, and “Afterlife” is no exception. Antonia’s family are immigrants from the Dominican Republic, and the novel is at its liveliest when the “sisterhood,” which consists of Antonia and her three sisters, is present on its pages. Though their interactions consist mostly of funny sibling squabbles, the fierce love they have for each other shines through, and the tight-knit nature of their family keeps Antonia grounded.

The sisterhood is both Antonia’s bedrock and another source of turmoil, contributing to the novel’s exploration of grief. On top of her husband’s death, her oldest sister, who the rest of the sisterhood is almost certain struggles with some kind of mental illness, disappears. Then, the pregnant girlfriend of the undocumented workers across the street seeks out Antonia’s help with no where else to go. Overwhelmed, Antonia seeks boundaries — “the narrow path,” lined with only the problems she can handle while separating those of the rest of the world. Yet she never strays into selfishness, since her own caring nature as well as the proddings from beyond of her kind husband and strong parents keep her accountable as she helps those in need. Broader topics such as climate change get only a glancing nod, yet readers see Antonia’s strong sense of empathy in her descriptions of being the “tiresome” dinner party guest preaching on the “death of the planet” and undocumented workers.

Though the novel often deals with difficult subjects, it manages to be comfortingly reflective and inspiring, expressed through gorgeous descriptions of sunrises imbued with “spring watercolor light,” and sharply witty writing. Time is often blurred, not just through flashbacks, but also with the reflections of a future Antonia, adding a haunting sadness to tragedy with preemptive lines that hint at the events to come. Past, present, and future intermingle, contributing to the air of reflection and introspection.

Grief and tragedy line the novel, yet Antonia’s struggles with these issues resolve themselves into a poignant, subtle depiction. Alvarez walks a narrow path, avoiding severity while ensuring that the reader never loses sight of the stakes of her story and never once doubts that the issues in question matter. Though the title is “Afterlife,” this is a story well grounded in reality. Antonia finds that people’s touch on the world lives on, and that “the only way not to let the people she loves die forever is to embody what she loved about them.” And more than the people in her life, it is the words from literature — Dickinson, Rilke, Auden, Rumi — with which she “wordsmiths” her world, using their lines to “plug the holes” in her life. The stitching of familiar, classic poetry gives this novel a transcendent quality. The collective consciousness of humanity, in the form of literature and memories, lives on in her, informing her actions, and showing us that even after life, a person still makes a difference in this world.