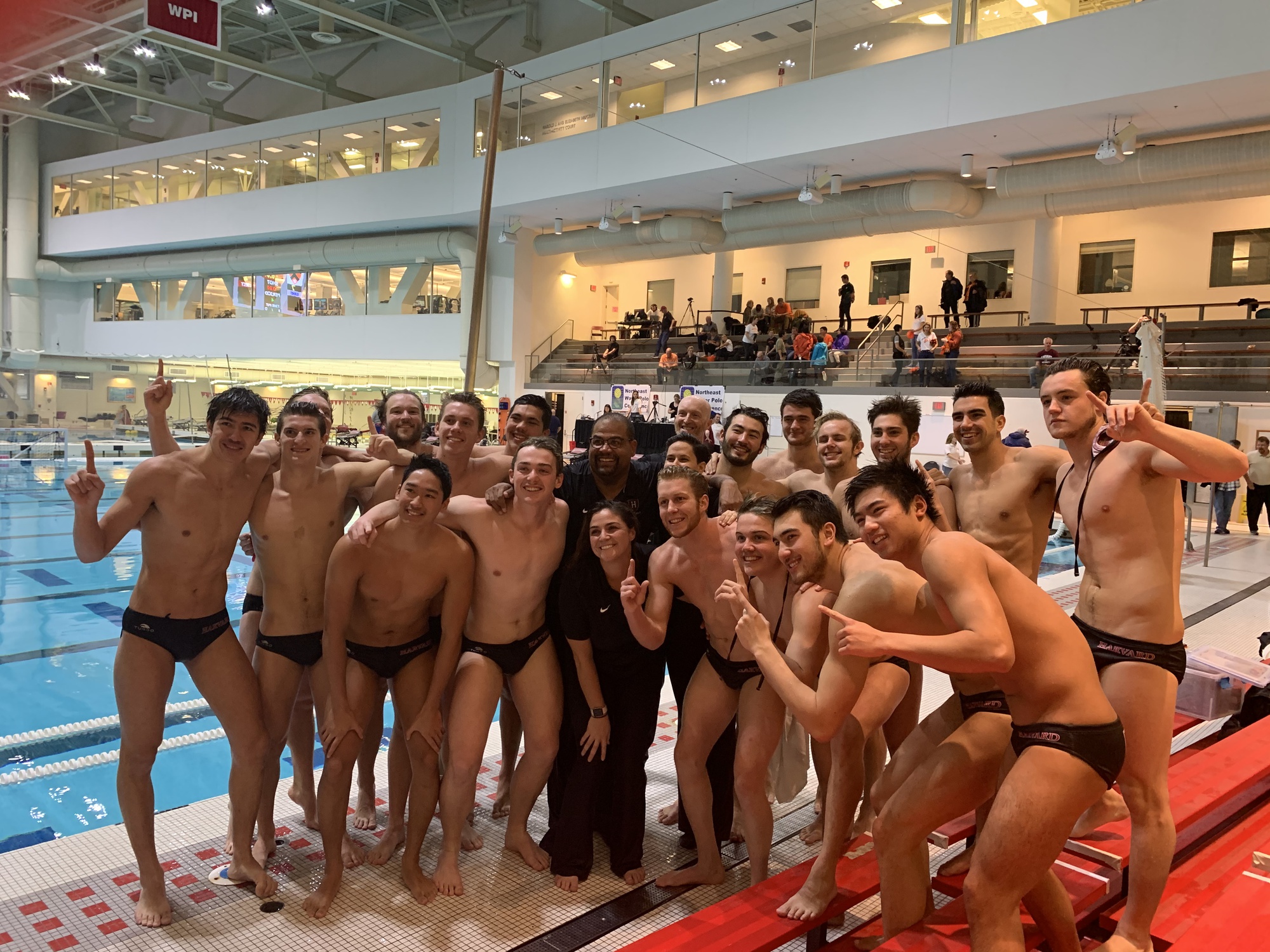 Number 200: Men’s Water Polo vs. Princeton, Game of the Year

By Zing Gee, Crimson Staff Writer
Harvard managed to hold on to its one-goal lead over Princeton in the closing stages of the NWPC Championship. With the 8-7 victory, the team earned the chance for a photo op and an NCAA Tournament berth. By Courtesy of Harvard Athletic Communications

“I don’t think there was a feeling of anxiety or nervousness around the team, but I think that people definitely knew the pressure that was on us,” sophomore goalie Noah Hodge said. “Preparation-wise, everyone knew we just had to go out there and do what we’ve been doing all year.”

The Harvard men’s water polo team entered the Northeast Water Polo Conference Championship on November 24 riding a program-best 28-0 undefeated record. They sat at No. 9 in the country, and the No. 1 seed in the conference tournament, slated to face off against the No. 2 seed and No. 19 team in the nation, the Princeton Tigers, who had defeated them the previous year in the same game. An automatic bid to the NCAA Tournament awaited the winner.

To add to the already monumental stakes, head coach Ted Minnis had secured his 199th win with the men’s program the day prior in a 15-9 victory over St. Francis. Harvard entered the matchup with the stage set for a chance to secure Minnis’s 200th career win with the program, a historic feat.

The Class of 2020 was already the winningest class in Harvard history, and Hodge revealed that after they got Minnis his 100th win, “They made a promise that they wanted to be there and win his 200th game for him.”

All of this made it that much more special when time expired, and the scoreboard read 8-7 in favor of the Crimson, minutes after sophomore Alex Tsotadze nailed a penalty shot with less than four minutes remaining in the fourth quarter to put the Crimson up for good.

In the first quarter, Harvard and Princeton traded goals, entering the second tied at 2-2. Then, the Tigers took the lead to 4-2 before the Crimson responded with a 3-0 run to make it 5-4 at the half. Late in the third, the teams went back-and-forth again until the match was even 6-6. Harvard went down 7-6 in the fourth before responding with 7:51 left, eventually sealing the deal as the defense held resolute after Tsotadze’s penalty shot.

“All of our games were kind of high-scoring,” said Hodge, but “this game was close,” and “whoever held the tighter defense, in the end, was going to win that game, and we knew that going in.” The matchup was only one of two times this past season where the Crimson did not reach double-digit scoring.

The tournament took place two T-stops away at MIT's Al '51 & Barrie Zesiger Sports and Fitness Center, a neutral site for the Crimson and Tigers, but effectively a home advantage for Harvard, meaning the entire women’s team and a slew of Harvard faithful were there to cheer the squad on. The women’s team unveiled a sign congratulating Coach Minnis on his 200th career win, and Minnis said, “To be in the pool celebrating with them and looking up and seeing the women’s team with the sign... just really kind of made me feel how special our program is and how much of a family we really are.”

The win capped off an incredible four years for the seniors as it became their third conference championship. It was also the third time in a row they faced Princeton in the final. In 2016 they topped Princeton 12-11 in the semi-final before beating Brown for the conference championship, and in 2017 they bested the Tigers 12-11 in overtime to secure back-to-back championships. The 2018 season met a tough end when they lost to Princeton 12-10, but this defeat proved to be instrumental in kickstarting the team’s success during the 2019 campaign (which included two other wins over the Tigers in the regular season).

Minnis, who was recognized as the NWPC Coach of the Year, revealed that the 2018 finals loss ended up being “huge for us just recentering…our offseason after that was amazing, the way the guys worked and were hungry again, and I think that loss really helped us lose some complacency that we were getting.”

Hodge, who garnered first-team all-conference and All-American honorable mention accolades, said, “losing that game honestly just fueled our fire more for this season,” as the team trained and lifted harder than they had ever before this past offseason.

“To be able to come back and kind of finish the journey and finish at 29-0 is just something as a coach you don’t ever really believe is gonna happen,” Minnis said.

Another key to the Crimson’s incredible run leading up to the championship game was the team’s depth, resulting as a manifestation of that hard work throughout the year.

“Our team this year was the most balanced that we’ve ever been,” senior co-captain Austin Sechrest said. “We didn’t really have a superstar this year, and that’s why we were undefeated. If anybody had an off game, it wasn’t like there were two guys to pick him up, there were ten guys there.”

Sechrest, who was the 2018 conference MVP, first-team all-conference, and an All-American honorable mention, was one of six scorers for the Crimson in the championship, netting a goal with 1:00 left in the second quarter to bring the game to 4-4. Tsotadze and sophomore Jackson Enright, co-captain for the upcoming 2020 season, tallied two goals, while first-years Gabe Putnam, Kaleb Archer, and Alex Bucur all had one apiece. 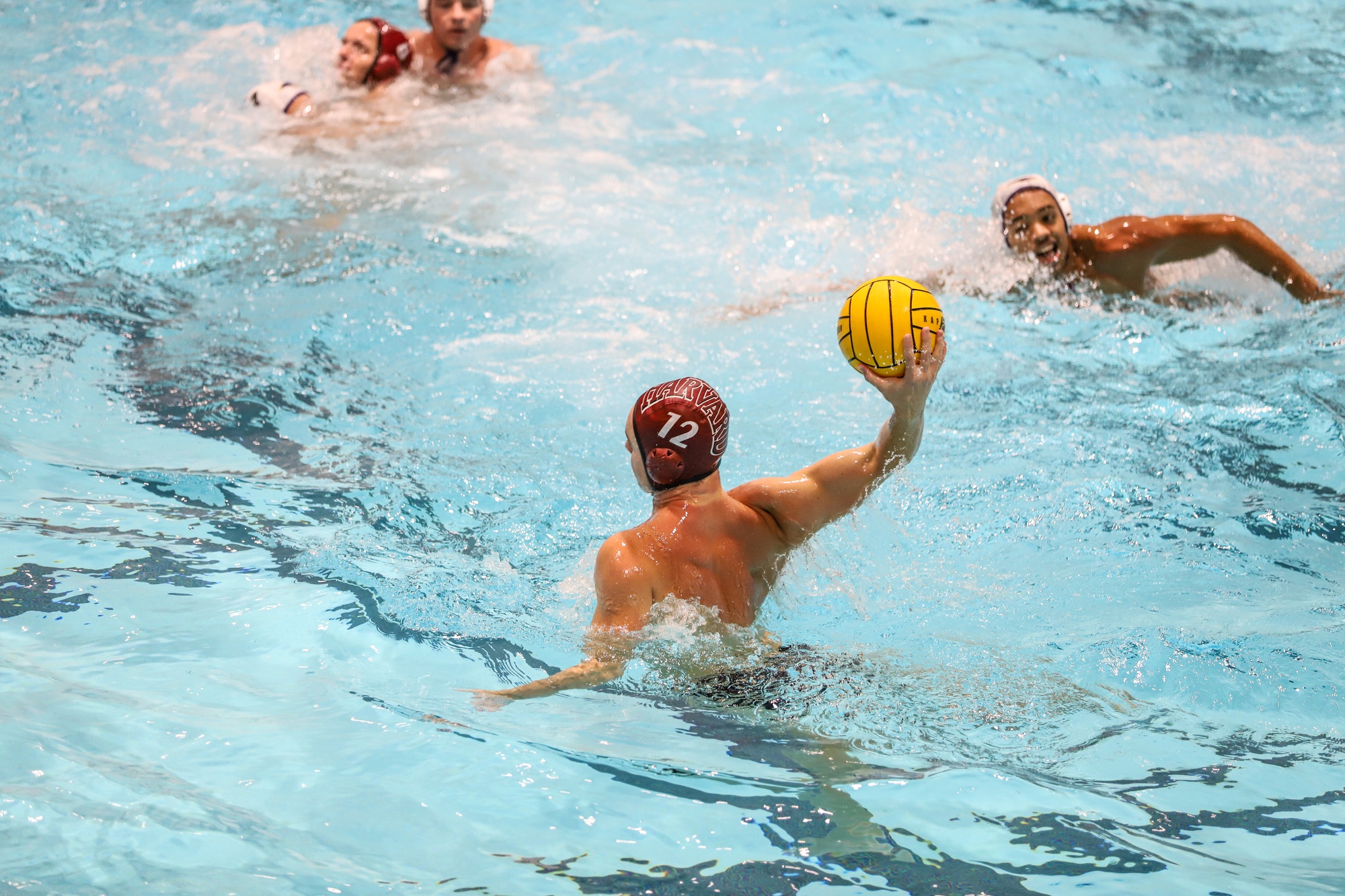 In a game that went back-and-forth each quarter, Hodge, the other co-captain for the upcoming 2020 season, recorded thirteen saves. He credited the defense’s ability to communicate well and the team’s ability to start quick counters and move the ball up the pool as keys to the win, which stem from the cohesiveness and chemistry within the team.

Minnis revealed that chemistry starts with the recruiting process. “We talk about [how] we’re going to be the support system for each other and we’re always going to be there and we’re going to be a family,” Minnis explains, given how his coaching staff and a majority of the players are from California, meaning they are quite far from home. “You know we’ll be dysfunctional at times like any family, but you know we’re gonna always have each other’s backs.”

Sechrest emphasized that “Everyone loves playing for him, and we have a really good team chemistry...I just felt like we were destined to cap it off...everything kind of fit together perfectly.”

Minnis credited the senior class, saying “The senior class has meant so much to me… They were leaders… They were [as] successful in the classroom as they were in the pool, and I think those are the things that I’m most proud of, how they led these teams and how they held our program at a standard on both sides of the river.”

With the conference championship, Harvard earned a bid to the NCAA Tournament, where they lost 13-12 in a hard-fought opening matchup with No. 12 Bucknell. Senior Bennie Seybold and senior co-captain Charlie Owens, the 2019 NWPC MVP, first-team all-conference recipient, and an All-American honorable mention, join Sechrest as they graduate with a record 102 career wins. The program will welcome four new players from the Class of 2024 next season, as they look to continue their dominance in the NWPC, defend their title, and once again reach the NCAA Tournament. Regardless of what the future holds, the 2019 NWPC Championship win over Princeton will be a special game that Harvard water polo will always remember.