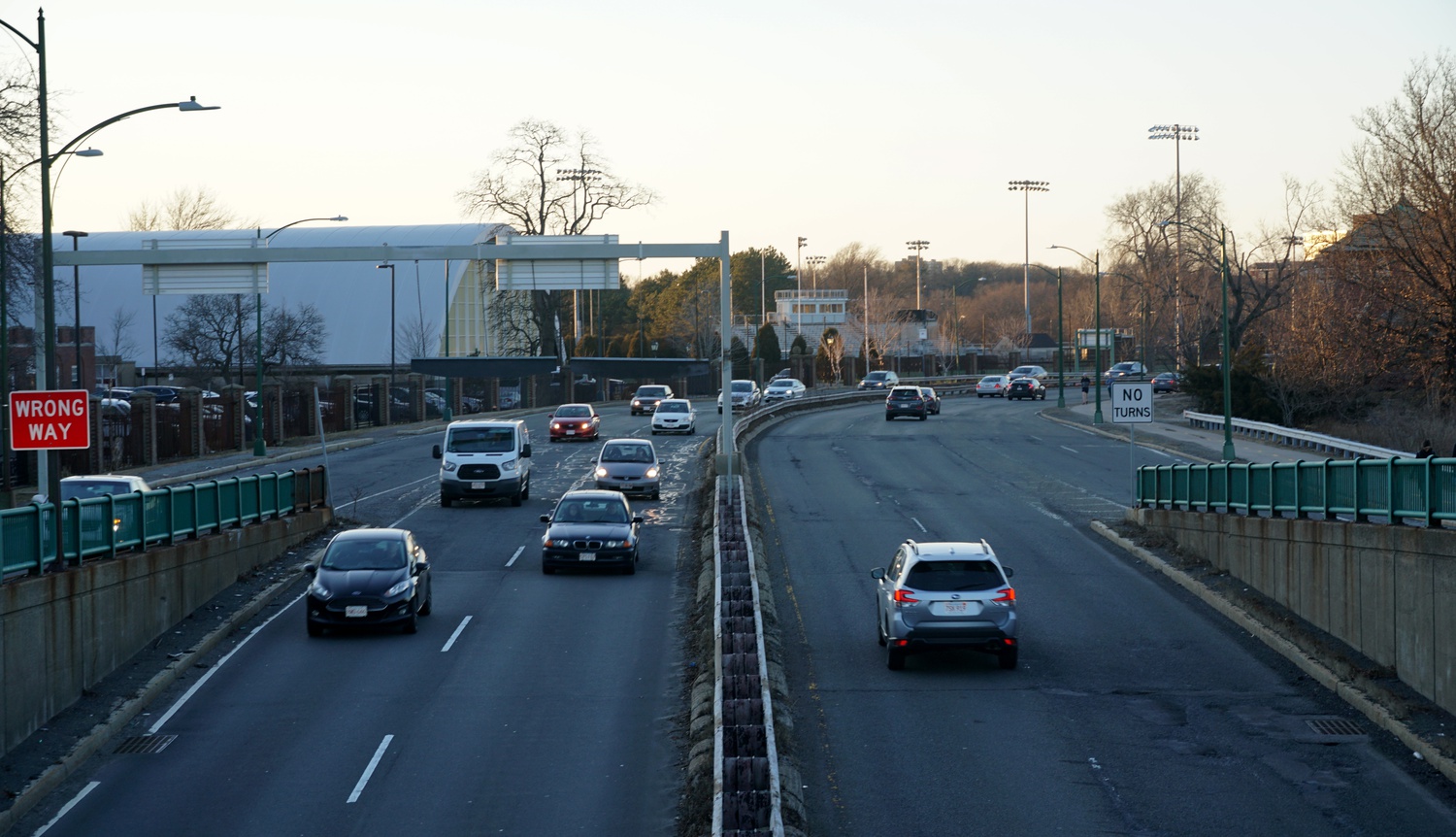 The Massachusetts Department of Transportation Board announced new plans for the design of the Allston Multimodal Project Monday. By Zing Gee
By Taylor C. Peterman, Crimson Staff Writer

The Massachusetts Department of Transportation Board announced a new proposal for the design of the Allston Multimodal Project on Monday which would not alter the Massachusetts Turnpike and Soldiers Field Road.

The new plan, known as the “Highway Viaduct alternative,” would make the modified highway viaduct shorter and narrower than the one that currently exists. It would also enable commuter rails to run underneath the viaduct with a ground-level Soldiers Field Road sitting adjacent to pedestrian and bicycle paths.

This is the latest proposal for the Allston Multimodal Project — a plan that began in 2014 to replace the existing Allston viaduct, improve the Mass. Turnpike and its interchange, and create a new commuter line stop known as West Station.

At Monday’s board meeting, Mass. Transportation Secretary Stephanie Pollack presented this new option to be considered alongside two other “build alternatives” — the “Soldiers Field Hybrid” alternative and the “At Grade” alternative — and a “no build” option which would entail extensive rehabilitation of the existing viaduct structure.

Anthony P. D’Isidoro, who serves as president of the Allston Civic Association and a member of the task force on the Allston Multimodal Project, said the hybrid approach has become somewhat controversial after initially drawing support.

“We were happy about that because the modified hybrid approach that [Pollack] decided to embrace was to put the Mass. Pike at grade,” D’Isidoro said. “When it came out that in order to achieve the modified hybrid, MassDOT — out of the blue — announced that they would probably have to build a temporary Soldiers Field Road into the [Charles] River.”

Following Monday’s board and task force meetings, D’Isidoro wrote in an emailed statement that MassDOT has “rejected” any adjustments — such as reducing lanes or eliminating shoulders — that could be made to implement either the At Grade alternative or the Soldiers Field Hybrid alternative without expanding into the river.

“The no build alternative of refurbishing the existing viaduct is unacceptable to me,” D’Isidoro wrote. “Clearly, they are pointing us to the new modified highway viaduct alternative,” he added.

D’Isidoro said the goals of the Allston Multimodal Project, since its inception, have gone beyond simply replacing the viaduct.

Richard A. Dimino, president and CEO of local business association A Better City, similarly said the project should go beyond just the viaduct problem.

“We've been specifically focused on trying to make sure that that project really realizes its full potential, not only being a multimodal project, but also a project that really enhances the land use and kind of urban characteristics of that space,” he said.

After the meeting, D’Isidoro wrote that he would “reserve judgment” in anticipation of possible “fine-tuning” that can be done to the two “at grade” alternatives to make them more widely acceptable.

The board presentation noted that when selecting among the three build alternatives, the relevant stakeholders will consider construction logistics, environmental impacts, cost, schedule, and traffic and rail operations.