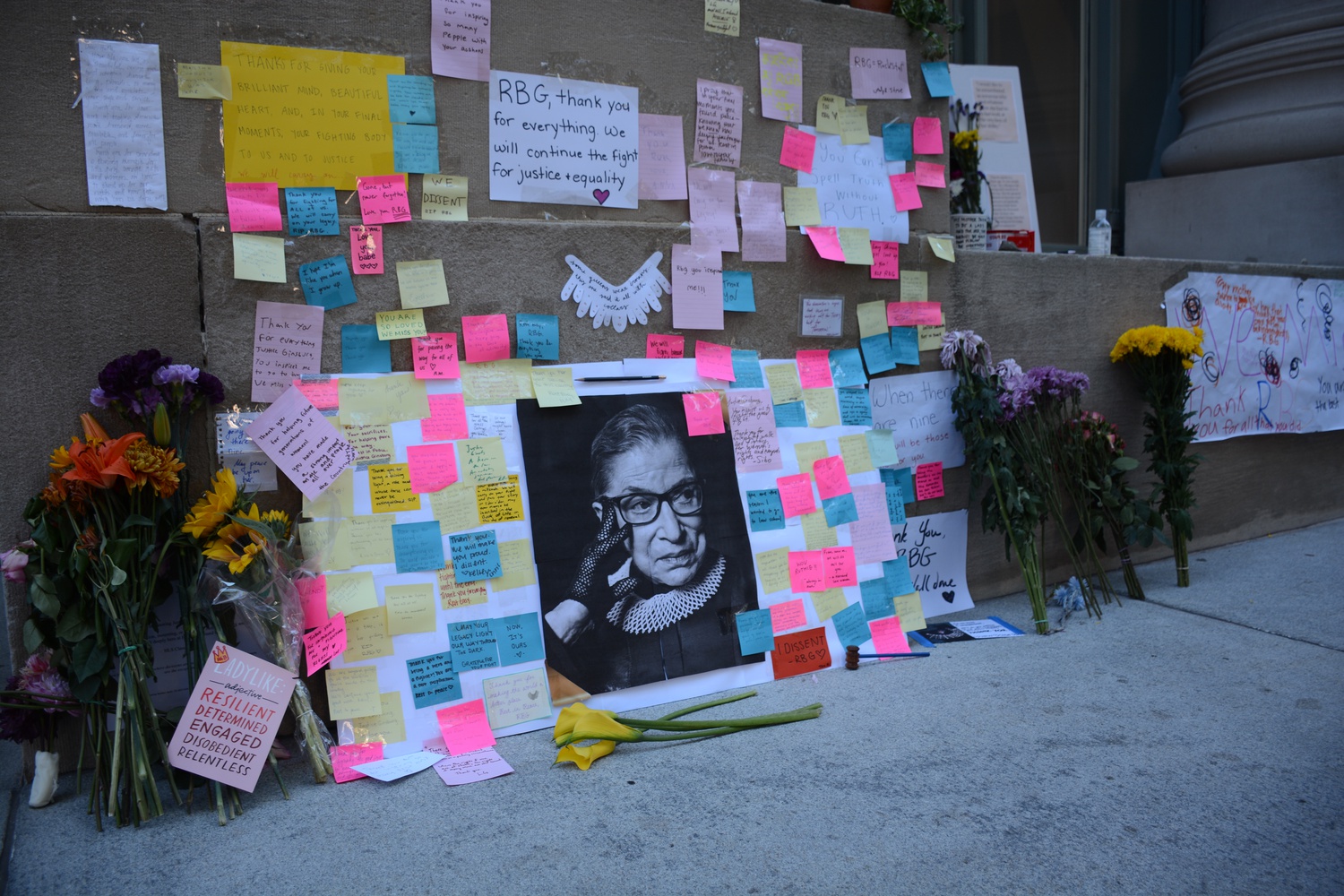 A memorial to Supreme Court Justice Ruth Bader Ginsburg, a Harvard Law School alumna, sprung up at the Law School this week after Ginsburg's death at the age of 87 Friday. By Owen A. Berger
By Kelsey J. Griffin, Crimson Staff Writer

As a Harvard Law School student in 1956, Ruth Bader Ginsburg was allegedly asked by the then-Law School dean to justify taking the place of a man in the Class of 1959. She would spend the next 64 years breaking gender barriers and making history in the U.S. Supreme Court.

The first female tenured professor at Columbia Law School and the second woman appointed to the Court, Ginsburg served as an Associate Justice of the Supreme Court for more than 27 years. During that time, she authored many notable opinions, speaking out against gender bias in the case United States v. Virginia and defending disability rights in Olmstead v. L.C..

After a lifetime of advancing equal rights, Ginsburg died on Friday at her home in Washington, D.C., at the age of 87.

“Justice Ginsburg personified the best of what it meant to be a judge,” Harvard Law School Dean John F. Manning ’82 wrote in a press release. “Her powerful and unyielding commitment to the rule of law and to equal justice under law place her among the great Justices in the annals of the Court.”

Born on March 15, 1933, Ginsburg grew up in Brooklyn, New York. Her mother, Celia Amster Bader, was the daughter of Polish immigrants while her father, Nathan, emigrated from Russia as a teenager.

Ginsburg graduated from Cornell University in 1954 with a degree in government and married Martin “Marty” Ginsburg that same year. The two briefly lived in Oklahoma before moving to Massachusetts in 1955 so her husband could attend the Law School. Ginsburg herself enrolled at HLS the following year.

As one of only nine women in a class of more than 500 law students, Ginsburg excelled as an editor of the Harvard Law Review while simultaneously caring for her daughter Jane and her husband, who was diagnosed with testicular cancer.

She spoke of her time at the Law School before the Senate Judiciary Committee in 1993, recalling the “indignities” imposed upon women at the time. In one instance, she claimed to have been shut out of a room housing old periodicals in Lamont Library due to her gender.

“It was closed to women,” she said in her testimony. “There was nothing I could do to open the door guarded by a university employee who said, ‘You can't enter that room.’”

Following her husband’s graduation, the family moved to New York, prompting Ginsburg to transfer to Columbia, where she graduated at the top of her law school class in 1959. She would later join the Columbia Law School faculty in 1972.

As a Columbia faculty member, Ginsburg co-founded the Women’s Rights Project at the American Civil Liberties Union, which sought to strategically challenge laws that discriminated on the basis of sex.

“Modeling her efforts on those by Thurgood Marshall and civil rights giants a generation earlier, she brought carefully chosen cases to the Supreme Court that, incrementally, established that sex discrimination has no place in the law,” Ginsburg’s former clerk Julia E. Kobick ’05 wrote in an email to The Crimson.

During this time, Ginsburg argued six successful cases before the Supreme Court and oversaw more than 300 gender discimination cases while still teaching full-time.

“She stood before a nine-member male Supreme Court and convinced them for the first time to strike down a law on sex discrimination grounds,” David C. Codell ’90, a former clerk and close friend of Ginsburg, said. “The importance of that can never be overstated.”

“She changed the world before she ever got on the Supreme Court, decades before,” he added.

Former president Jimmy Carter named Ginsburg to the United States Court of Appeals for the District of Columbia circuit in 1980, and 13 years later, President Bill Clinton appointed her to the Supreme Court.

“Her story already is a part of our history,” Clinton said at Ginsburg’s swearing-in to the Court. “Now her words and her judgments will help to shape our Nation today and well into the 21st century."

Dozens of Harvard law students served as clerks for Ginsburg during her tenure in the Supreme Court. These former clerks recall her dedication as a public servant and as a mentor.

“RBG was tenacious, unflappable, and deeply wise,” Law School Professor Daphna Renan — who clerked for Ginsburg in 2006 — wrote in an email. “She was grace and grit combined, and she never lost sight of the impact law can have on people’s lives.

University of California, Berkeley School of Law Professor Amanda L. Tyler — who clerked for Ginsburg in 1999 — noted in an email that Ginsburg refused to stay home even after battling cancer throughout the weeks leading up to the formal start of the Court’s Term that year. Tyler explained the Justice surprised her with a phone call the first day of the Term to say she would be present.

“As things turned out, I was fortunate enough to be first to arrive in chambers on the morning of October 4, 1999 — the first day of oral arguments that Term — and this meant I was the one who answered the phone when the Justice called chambers from her car that morning,” Tyler wrote.

Tyler wrote that this episode demonstrated Ginsburg’s courage and commitment to her fights against both cancer and discrimination. She described Ginsburg as “an inspiring role model at each and every turn” who set high expectations and offered her law clerks wisdom and comfort.

“She was a profoundly dedicated public servant in no small measure because she appreciated just how important her role was to ensuring that our Constitution belongs to everyone,” Tyler wrote.

Kobick echoed Tyler’s view of Ginsburg as a mentor and personal inspiration, saying the Justice was never afraid to speak her opinion and always held firm to her morals.

“She taught me so much—about how [to] make your voice heard and about how to work tirelessly for what is right and just,” Kobick wrote. “She had confidence that, in time, her vision of equality and fairness would prevail.

Kobick also noted that Ginsburg was unique in her tenacity and grace — as well as in her vocabulary.

“RBG loved the word ‘pathmarking,’” she wrote. “I had not heard of the word before working with her, but go through her opinions, and you’ll find them peppered with references to pathmarking civil rights legislation or pathmarking cases.”

Elizabeth M. Prelogar, a lecturer at the Law School, picked up on that habit after clerking for Ginsburg three years before Kobick.

“Her pathmarking advocacy advancing civil rights will live on,” Prelogar wrote in an email.

Ginsburg’s lifelong mission was to ensure equal rights for all people through the work of those she taught and mentored, Codell said. The Justice’s strategic approach to civil rights litigation inspired his own career.

“She taught me how to do that, and I became an LGBTQ rights lawyer,” he said. “It was my great honor not only to serve as her law clerk, but even decades later, to submit briefs before her at the Supreme Court, arguing for the rights of same-sex couples to marry.”

John M. Rappaport, who also clerked for Ginsburg, wrote in an email that the Justice always refused to allow the quality of her work to deviate from excellence, recalling how she would read standing at her desk to avoid sleeping. He said Ginsburg believed this effort was necessary to produce the lasting change she strived for as a justice.

“While Justice Ginsburg enjoyed her late-found celebrity as the ‘Notorious RBG,’ her life reflected an understanding that lasting social progress comes not from flash and fame but rather grit, persuasion, and endless hard work,” he wrote. “To honor her legacy is to continue that work.”

HLS professor emeritus Laurence H. Tribe ’62 described Ginsburg as “a titanic force” who will continue to affect American law and life and advance the causes of equality and inclusion even in death.

“Her departure from the scene on the eve of the Jewish New Year should be an occasion for renewed celebration of her enduring legacy as a woman whose tiny physical stature belied her massive contribution to the best angels of our nature,” he wrote in an email. “May she rest in peace and power.”