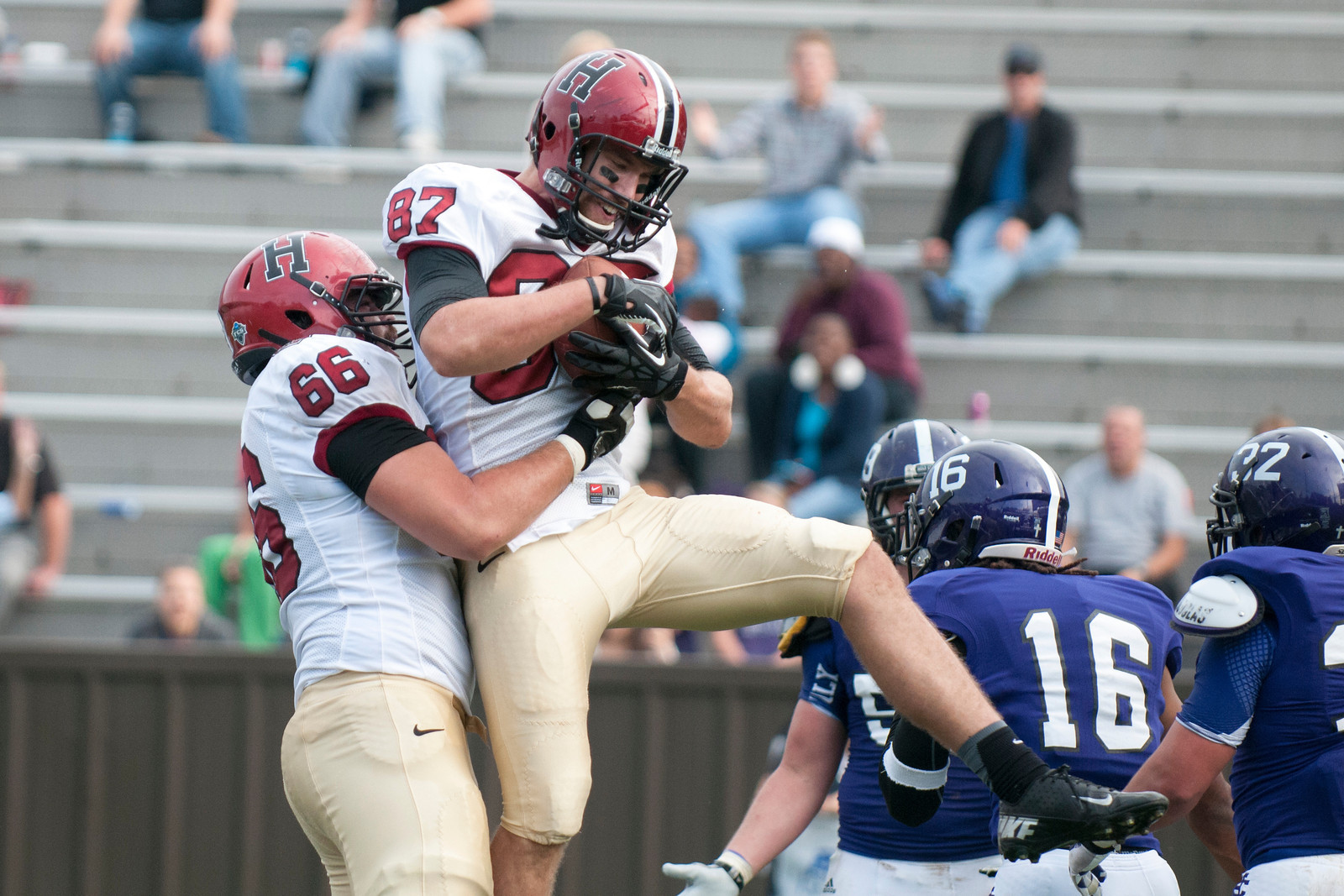 Cameron Brate '14 of the Tampa Bay Buccaneers will become just the sixth Harvard player in history to appear in the Super Bowl. By Courtesy of the Associated Press

Cameron Brate, tight end for the Tampa Bay Buccaneers, is set to become just the sixth Crimson alum to play in the Super Bowl. Harvard has now been represented on the biggest stage two consecutive years, thanks to its increasing talent, especially at the tight end position.
By Joseph W. Minatel

For the first time in history, Harvard finds itself represented on the biggest stage in football for the second consecutive season. This weekend in Tampa, Cameron Brate ‘14 will suit up on his home field for the Buccaneers in Super Bowl LV. While Brate is the sixth Crimson alum set to appear in a Super Bowl, Sunday will mark back-to-back years of representation in the game for Harvard football.

“It obviously is a great feeling to see those kids, how much they've developed, and the incredible character that they have shown to get to this level, the highest level on the planet,” Harvard Coach Tim Murphy said. “I’m just extraordinarily happy for these kids.”

Brate has been an essential part of the Buccaneers' offense, with future Hall of Fame quarterback Tom Brady finding him for 11 catches, 149 yards, and one touchdown so far in the playoffs. His touchdown score proved to be the game-winner in the NFC Championship victory over the Green Bay Packers, earning Tampa Bay a spot in the Super Bowl at home.

Brate has already been a part of Harvard history in the NFL. In October 2017, Brate caught a touchdown pass from the then-Tampa Bay Buccaneers quarterback Ryan Fitzpatrick ‘05, connecting for the first-ever Harvard-to-Harvard touchdown pass in NFL history.

Brate, however, is not the only recent Crimson product to make his mark in the Harvard history books. Last season, Kyle Juszczyk ‘13 played for the San Francisco 49ers in Super Bowl LIV. In the second quarter, Juszczyk took a 15-yard reception into the end zone for a touchdown, the first-ever Super Bowl score by a Harvard alum. Despite holding a 10-point lead in the fourth quarter, the Kansas City Chiefs rattled off a late 21 points in just over five minutes in order to defeat Juszczyk and the 49ers, winning a thrilling championship, 31-20.

“Those guys [make] good coaches,” said Coach Tim Murphy, who coached both Juszczyk and Brate at Harvard. “We did a good job on evaluating their character, their work ethic, their versatility, and, certainly, their resiliency, to be able to fight through whatever they had to and to get to the level they're at. I think it’s a sign of good recruiting and good evaluations, but at the end of the day, those guys make good coaches at any level.”

Now playing on the biggest stage at the next level, Brate will find himself in a similar situation as his former teammate the year before, facing off against Patrick Mahomes and the Kansas City Chiefs in this year's Super Bowl. The Chiefs once again dominated the league en route to their AFC title, and Brate and the Buccaneers — led by Tom Brady, the most successful postseason quarterback of all-time with different Massachusetts roots — will hope to dethrone the defending champions. 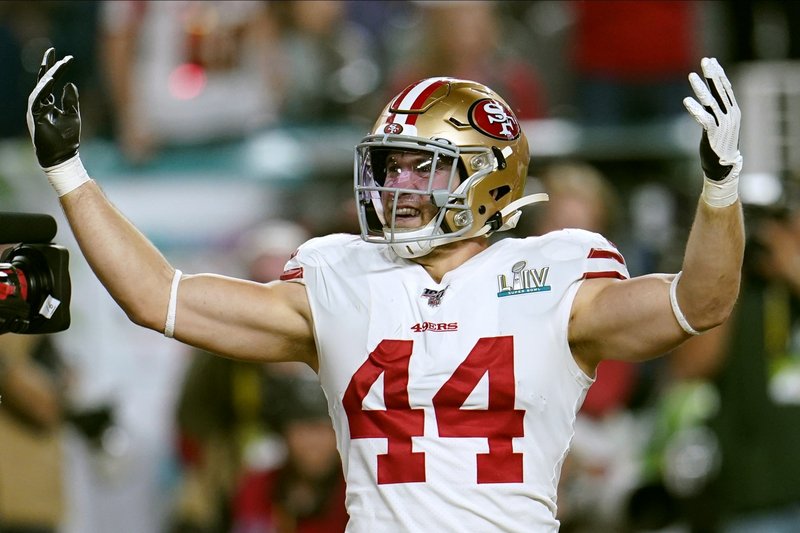 Kyle Juszczyk '13 became the first Harvard player to ever score a touchdown in the Super Bowl with his 15-yard receiving score in Super Bowl LIV for the San Francisco 49ers. By Courtesy of the Associated Press

While Juszczyk now plays fullback for the 49ers, the pair both played tight end together at Harvard, overlapping with each other in three of their four years in Cambridge. Both would star together in Harvard’s tight end-friendly offense. Juszczyk and Brate finished their careers third and fourth in career receiving touchdowns with 22 and 18 receiving touchdowns, respectively.

"We have two tight ends in the game at all times,” Coach Murphy said. “We probably rotate three or four throughout the game. They had that opportunity. And indeed, they had a responsibility that they had to play all the positions.”

In their senior seasons, the pair of tight ends both earned First-Team All-Ivy League honors, dominating the Ancient Eight as a pass-catching duo in their time at Harvard. In 2012, Harvard went 8-2 and finished second in the conference. After Juszczyk’s graduation, Brate helped lead the 2013 team to an impressive season, going 9-1 and capturing an Ivy League title.

Juszcszyk specifically has made a name not only as a pass-catcher but as a blocker too. This year, the bruising fullback was named to his fifth consecutive Pro Bowl.

Harvard has recently become a breeding ground for NFL tight ends. Of Harvard’s six players on NFL rosters at the start of the 2020 season, four played tight end for the Crimson. In addition to Juszczyk and Brate, Tyler Ott ‘14 of the Seattle Seahawks and Anthony Firkser ‘17 of the Tennessee Titans all played the position under Coach Murphy in the last decade. Firkser made history last season, scoring the first-ever postseason touchdown by a Harvard alum in a Wild Card victory over the New England Patriots.

“We've been very fortunate at the tight end position,” said Coach Murphy, who also coached the tight ends and halfbacks in Harvard’s offense. “Having guys like Kyle Juzsczyk, Cam Brate, Anthony Firkser, Tyler Ott, Ben Braunecker, all five of those guys were on NFL rosters five months ago, and I had the luxury and the good fortune of having them in my office for four or five years.”

Not only has Harvard served as a collegiate producer for NFL tight ends, but it has also led the pack in the FCS as a whole. Harvard’s six players on an NFL roster at the start of the 2020 season paced the Ivy League and was second in the FCS overall, trailing only James Madison.

“They were all obviously outstanding football players for us, even though they were not necessarily super highly recruited out of high school,” Coach Murphy explained. “But I think they all had that common trait of just tremendous character, not just in terms of being class kids, but being kids who had a great work ethic and who were extraordinarily coachable. Because of all of those things, they developed to the point where they were as good as anybody in the country at their positions, and that's where they're at now. It's a long climb for anybody in the FCS, and I’m just extraordinarily proud of those kids.”

The recent Harvard success in the NFL, highlighted by the back-to-back Super Bowl appearances by Juszczyk and Brate, has further shown the growth of the program and the Ivy League as a whole.

Indeed, the Ivy League has performed at high levels in recent years, boasting nearly two dozen Ivy League grads on NFL rosters for the last several years. Harvard has led this charge thanks to its recent crop of talent.

“We've had 32 kids sign NFL contracts since we took the job in 1994,” Coach Murphy said. “All of a sudden, people have said ‘hey, we've got to keep up, we’ve got to find a way to compete,’ and the caliber of play in the Ivy League and the level of the student-athletes in the Ivy League in the sport of football has never been higher.”

As for Brate, he will hope to become just the third Harvard player to win the Super Bowl. John Dockery ‘66 of the New York Jets and Matt Birk ‘98 of the Baltimore Ravens are the only former Crimson to hoist the Lombardi Trophy in Super Bowls III and XLVII, respectively.

The Buccaneers are the first team to ever play the Super Bowl in their home stadium, and Brate and his Tampa Bay teammates will hope to lift the Lombardi Trophy at the center of their own field on Sunday night.