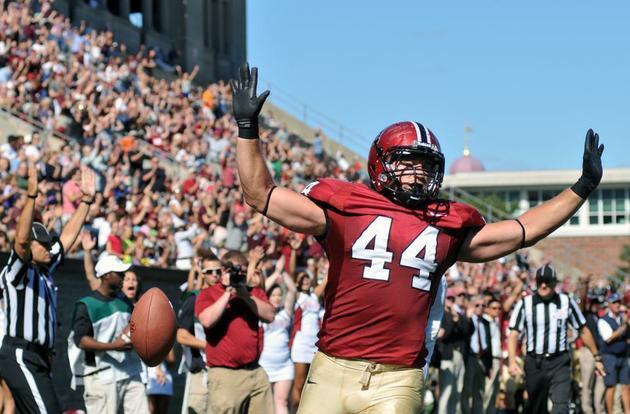 Former Harvard standout Kyle Juszczyk ‘13 is no stranger to the big stage since he entered the NFL in 2013. This Sunday, however, Juszczyk will be making his first appearance on the biggest stage in the sport: the Super Bowl.

The San Francisco 49ers fullback had appeared in the playoffs five years ago with the Baltimore Ravens, joining the team just months after a Super Bowl victory. Now a member of the most successful team he has played on in his prosperous career, Juszczyk finds himself in the Super Bowl following only his second career playoff appearance.

While 60 minutes of football separates Juszczyk from champion status, the Harvard alum is no stranger to success. His career in Cambridge was defined by impressive accomplishments. The two-time All-American and three-time All-Ivy — including a unanimous selection following his senior season — left his mark on the Harvard record books. Juszczyk currently sits as the all-time leader among tight ends in receptions, receiving yards, and touchdown receptions. When receivers are included, Juszczyk still sixth, seventh, and third in each category, respectively. Team success followed, as Harvard went 31-9 in Juszczyk’s four years as a Crimson, including an Ivy League title during an undefeated conference campaign in 2011.

This success followed into Juszczyk’s professional career. He was selected by the Ravens in the fourth round with the 130th overall pick in the 2013 NFL Draft, the second-highest ever for a Harvard football player, behind only Isaiah Kacyvenski ‘00

Following his 2016 campaign, Juszczyk was named to his first-ever Pro Bowl, and the recognition did not stop in Orlando. His success earned him a four-year, $21 million contract with the 49ers the following offseason, setting the record for the largest contract ever signed by a fullback. Juszczyk would make the Pro Bowl for the next three consecutive seasons, playing in Orlando the week before the Super Bowl with the league’s best from 2017 to 2019. This year, however, the Pro Bowler missed the game in order to prepare for the much more important Super Bowl this weekend.