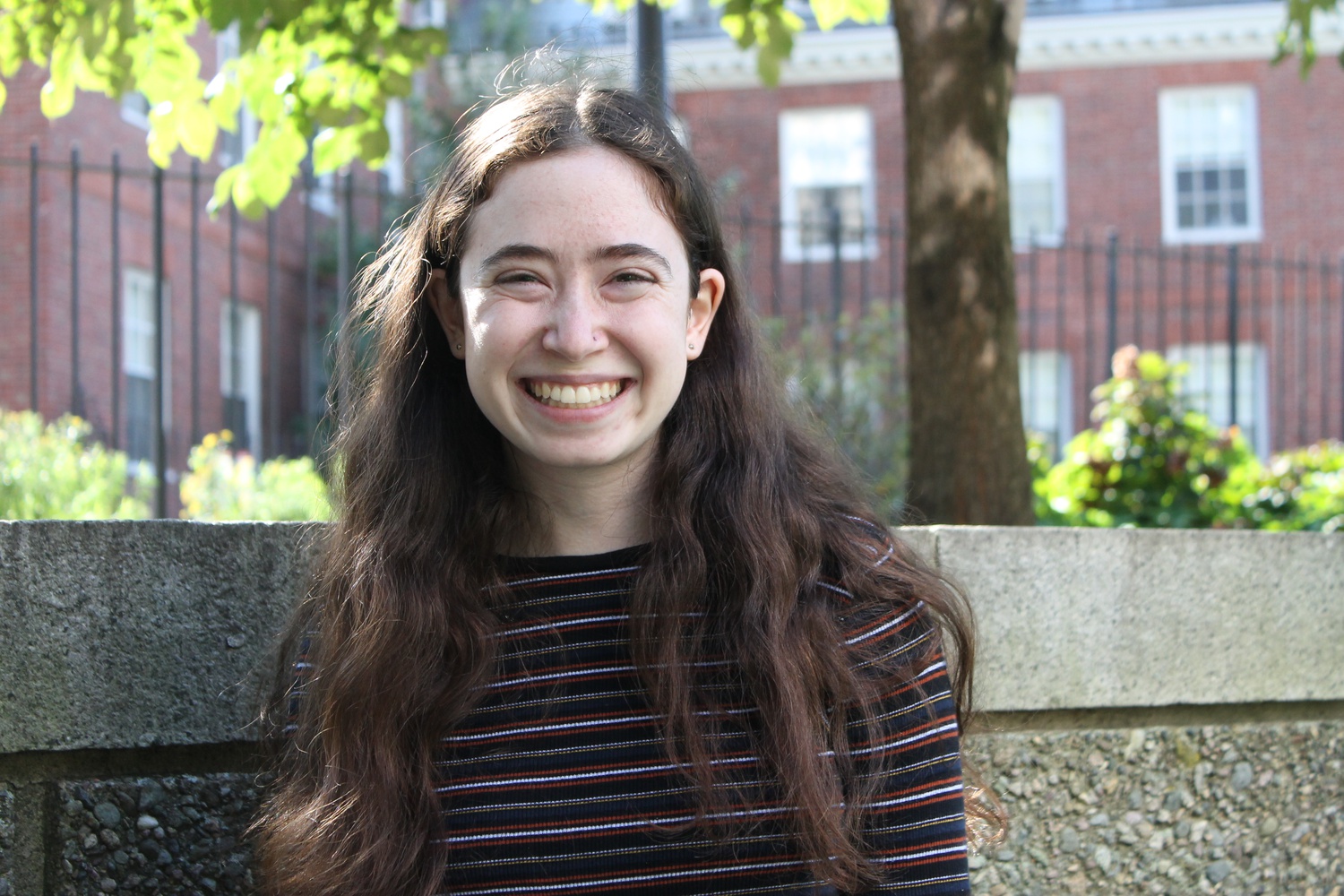 Rachel C. Auslander ’22-’23 is one of the co-founders of the Undergraduate Disability Justice Club. By Sophia S. Kim
Advertisement
Advertisement

"As students joyously celebrated Harvard’s reopening, some of their peers have become increasingly aware that many parts of campus aren’t designed for them."
By Janice S. Nam and Andy Z. Wang

As students joyously celebrated Harvard’s reopening, some of their peers have become increasingly aware that many parts of campus aren’t designed for them. In fact, Case McKinley ’21-’22 says that Harvard’s physical structure and layout “really make life difficult” for people who are disabled, have chronic illness, or have a mental illness.

McKinley, who uses a wheelchair, is one of many students with disabilities who are bringing attention to what he says is Harvard’s tendency to consider students with disabilities as a second thought. This year, McKinley and several friends passionate about disability justice on campus founded the Harvard Undergraduate Disability Justice Club, aiming to combat ableism and inaccessibility around Harvard.

On one level, inaccessibility at Harvard is a logistical issue. Rachel C. Auslander ’22-’23, another co-founder of the club, says that though Harvard has put considerable effort into accessible doors and entrances, some practical issues have been overlooked. She cites the example of a ramp installed in Kirkland House’s dining hall that is too short for wheelchair users. Auslander, who has a chronic illness, says the club wants to request a longer ramp, which she says should be a simple and inexpensive fix.

McKinley also says that Harvard Yard being “really physically inaccessible” is a key example of the campus’s hostility to those with disabilities. And for McKinley and Auslander this physical inaccessibility leads to a more profound sense of exclusion from Harvard as a whole.

“Think about all the good memories, all the study sessions, all the friendly things that happened after you walked up a set of stairs,” McKinley says. “Just try to imagine what it’s like to get here and be excluded from all of that.”

At Harvard, the Accessible Education Office is responsible for helping students with disabilities receive appropriate accommodations. Faculty of Arts and Sciences spokesperson Rachael Dane points to significant accessibility improvements undertaken by the FAS in the last few years as evidence of the University's commitment, but also acknowledges that “construction, way finding, and physical access of buildings can be outside of AEO’s control.”

Auslander says that on the surface, “Harvard has infrastructure set up to ensure that disabled and chronically-ill students can get the support that they need.” Yet, reflecting on her own experience, Auslander says it took her a few months to find out that her chronic illness qualified her for academic accommodations. “There’s still a burden put upon us to make sure that it is used properly,” she says.

Milagros Costabel ’25 says that she was offered a three hour accessibility orientation by the AEO. Costabel, who is blind, says that “it wasn’t enough.”

“Three hours are not enough for any person to learn a campus, or to learn important places to go, especially because Harvard’s campus is a mess,” Costabel says. “You have a lot of tiles, you have grass, you have a bunch of things that make it really hard to navigate, especially if you’re blind.”

Costabel says that she doesn’t blame the AEO: “They are learning on the go,” especially in accommodating students with disabilities that are less common. But she also says that at the beginning of the school year, she was angered by the delay of her accommodations.

Dane wrote that the AEO has a “straightforward process” for requesting accommodations.

“Once students meet with an AEO advisor, they work with students to identify access needs and find solutions in their implementation,” Dane wrote. “AEO works hard to ensure that the students do not experience undue burden in this process.”

However, for Costabel, who hails from Uruguay — a country she says is “is not the best in terms of disability access” — Harvard’s initial inability to fully provide the accommodations she needed was “not what [she] signed up for.”

Since then, Costabel has taken initiative to help students in similar situations: she reached out to an organization that could create a Braille map of campus and connected them with the AEO. “Harvard didn’t have a map before,” she says.

Despite Costabel’s efforts, McKinley says the onus is ultimately on Harvard to be able to provide appropriate accommodations such that all students feel at home. “There are people within the Harvard structure who are really on my side,” McKinley says. But he says he wishes “they could make more change than they’re actually empowered to make.”

Bridging this gap — leveraging the collective experiences of disabled students to push for a more accessible environment — is the mission of the Disability Justice Club.

Auslander sees the Disability Justice Club as a space that allows for collective advocacy for disabled students’ experiences, rather than requiring individuals to “speak up about issues by and for themselves only.” Currently, the club is working on a map of all the accessible and inaccessible locations on campus, including bathrooms.

McKinley hopes that people without disabilities become aware of the accessibility issues on campus and see themselves as “part of the fight for change.” At the very least, he says, “whether we think of ourselves as disabled or not, we are damaged by ableism on campus in the form of late work policies when you’re sick or leave of absence policies.”

But the club’s efforts also extend beyond providing accessibility solutions. Auslander says “ableism runs rampant everywhere in society, but especially at Harvard,” a campus mired by perfectionism and grind culture. Receiving accommodations is a small victory; allowing yourself to make use of them without feeling guilty is a battle.

As Auslander puts it, “Confronting ableism on campus is the main starting point for making campus more accessible.”