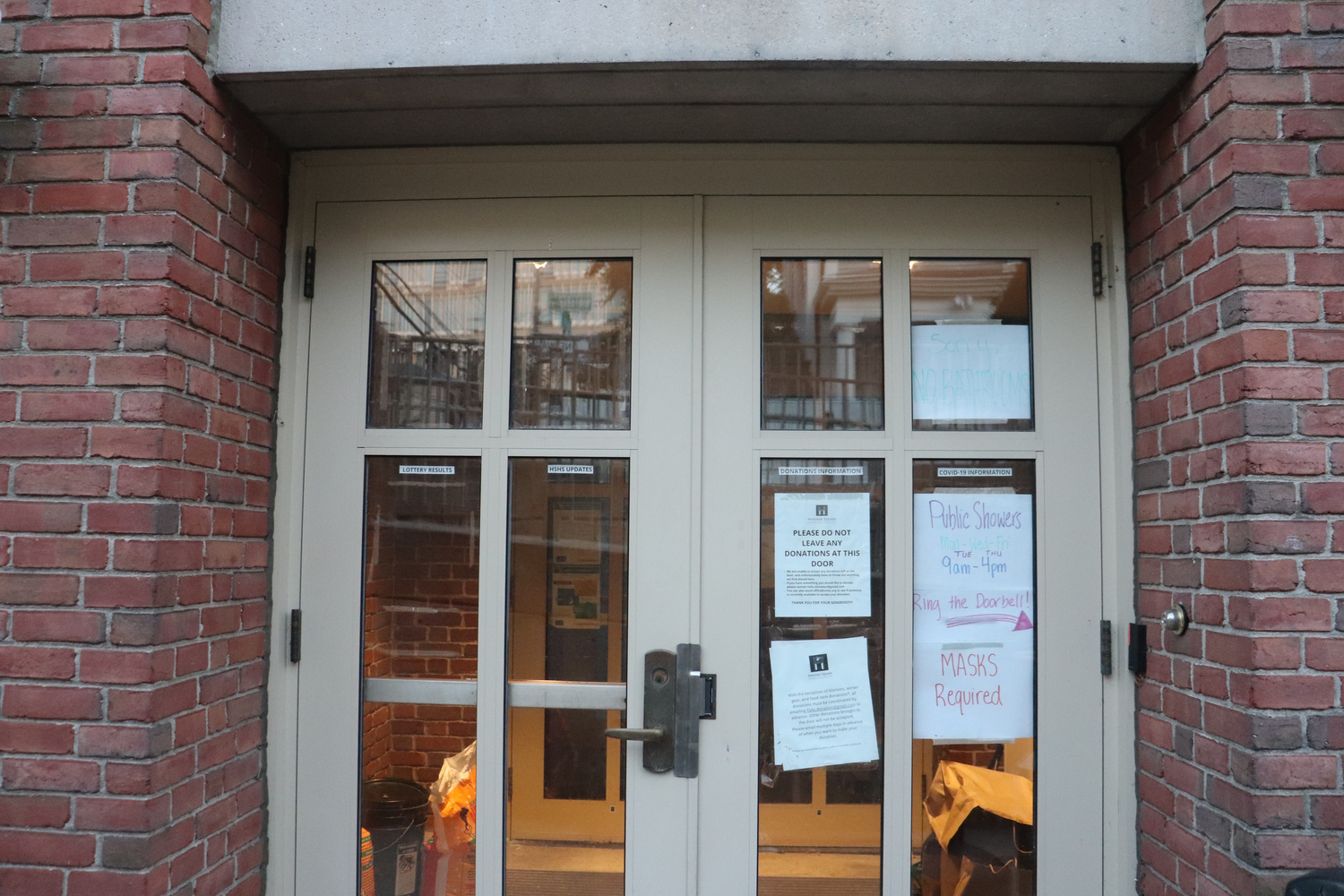 Only a week after the Covid-19 shutdown on March 17, 2020, the city of Cambridge started a restaurant shelter meals program, partnering with local food establishments to provide meals to people experiencing homelessness throughout the public health crisis. The program has expanded from eight sites around the city of Cambridge to 17 meal locations, one of which is HSHS.
By Kaysia E. Harrington and Ciana J. King

In the early days of the pandemic, Harvard Square Homeless Shelter volunteers handed out homemade grilled cheeses, tuna melts, and peanut butter and jelly sandwiches to people experiencing homelessness. Nearly two years later, the sandwiches have been replaced by steady deliveries of individually packed meals from some of Harvard students’ favorite restaurants, including Felipe’s, El Jefe’s, Pinocchio’s, and Source Restaurant. This initiative is a part of a city-run meal program that has been serving the city since March 2020.

At the beginning of the pandemic, HSHS was in a tight spot — the shelter had been closed for Covid-19 safety precautions. Uncertain of whether operations would continue during the pandemic, HSHS missed the deadlines for federal grant funding. Once renovations were completed, the shelter sought out individual fundraisers and new partnerships as alternative funding options.

Eventually, the shelter leadership reached out to the city for assistance. The Street Outreach team of HSHS, co-directed at the time by Fahedur Fahed ’22 and Henry N. Lear ’24 (a staff writer for this magazine), inquired about becoming involved with the City Meal Program after its shelter kitchen was shut down due to Covid-19 protocols.

“We didn’t take no for an answer,” Fahed says.

Only a week after the Covid-19 shutdown on March 17, 2020, the city of Cambridge started a restaurant shelter meals program, partnering with local food establishments to provide meals to people experiencing homelessness throughout the public health crisis.

The program has expanded from eight sites around the city of Cambridge to 17 meal locations, one of which is HSHS. Over the last 18 months, the city has spent over $1.67 million to provide the community with over 240,000 hot and cold meals. The program has been extended several times during the pandemic. Most recently it has been extended through the end of November, and according to Matt P. Nelson, assistant to the city manager for community relations in Cambridge, another extension is possible.

Nelson also says that each week, the city manager’s office collaborates with local restaurants, developing a contract to secure that week’s meals. He says restaurants are selected by price, suggestions from guests, and the number of orders needed for the week. There is an open line of communication between the various departments and sites to ensure every guest receives a meal.

While the restaurants are paid by the city for their contributions, their love for the community largely motivates their involvement, says Nelson. “The restaurants that have been involved in this appreciate just being able to help out. It isn’t just about them getting the business from the city,” he says. “It’s also being able to help a community.”

Harvard is also a part of this community effort, as students make up a large portion of HSHS volunteers. But during the pandemic, Harvard did not sanction in-person activities, which included volunteering at the shelter. HSHS looked to students living off-campus, graduate students, and working professionals to meet the needs of the shelter’s guests. “I think a lot of people in any sort of social justice work after a sustained amount of time can get jaded,” says Fahed, chuckling. “Students bring such a fresh perspective and energy.”

Similar to HSHS volunteers, Daniel P. Roughan, owner of Source Restaurant, is eager to contribute to the initiative. “Somebody is always having a worse day, ” he says. “If you can participate in that beautiful person’s life and give them a reason to smile or a reason to breathe easy, even if it’s for 30 minutes, then you’ve done something right.”

Nelson states that the program, which benefits both small businesses and people experiencing homelessness, was one of the first of its kind. Furthermore, many cities have reached out to the City of Cambridge, asking how to create a similar program within their own communities.

To Nelson, establishing the program just made sense. “It’s interesting to hear that it’s such an innovative program, but when you take a step back, it’s pretty simple,” he says. “Restaurants make food, people need food, and this community is in need, so it was a win-win by all accounts.”