Harvard Out of Occupied Palestine Protests For Divestment in Harvard Yard 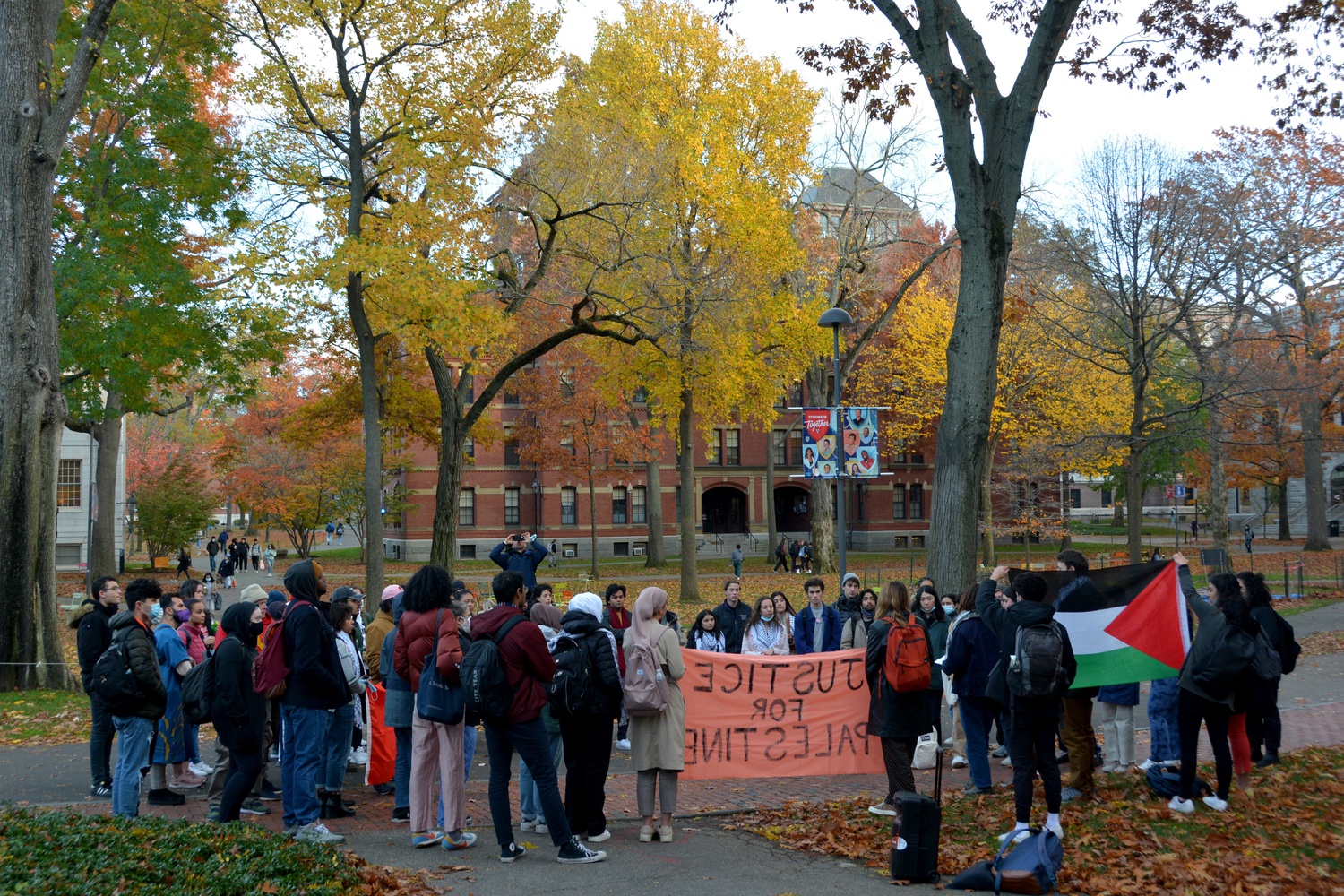 Student group Harvard Out of Occupied Palestine held a rally in the Yard Monday afternoon calling on Harvard to divest its endowment from any companies with ties to Israel's presence in Palestine. By Caroline Allen
By Audrey M. Apollon and Leah J. Teichholtz, Crimson Staff Writers

Harvard Out of Occupied Palestine held a rally in the Yard Monday afternoon to call on Harvard to divest its holdings in companies allegedly "complicit" in human rights abuses against Palestinians.

Protesters chanted phrases like “Free, free Palestine,” “No more money for Israel’s crimes,” and “No peace on stolen land” as they marched from the John Harvard Statue to Widener Library before concluding at Massachusetts Hall.

Outside of Massachusetts Hall, organizers from HOOP and other activist groups, including the Ethnic Studies Coalition and Harvard Prison Divestment Campaign, gave speeches in front of a crowd of roughly 60 protesters and spectators and delivered a letter to University President Lawrence S. Bacow’s office in the building.

HOOP is a student activist group established last year that calls on the University to disclose and divest all indirect and direct holdings in companies tied to Israel’s presence in Palestine.

HOOP organizers Malaika K. Tapper ’23 — a Crimson Magazine editor — and Nadine S. Bahour ’22 read the crowd an excerpt of the letter HOOP delivered Bacow, which referenced his September decision to move to divest the endowment from fossil fuels. In the letter, organizers demanded the University be “consistent both morally and logically” by divesting its endowment from corporations affiliated with Israeli settlements.

“For too long, the settler colonial state of Israel has occupied, subjugated, and oppressed Palestinians on their own land, denying them of their basic human rights and for too long Harvard University has profited off of this injustice,” the letter argues.

Organizers specifically criticized the Harvard endowment’s investments in companies including Motorola, which provided “virtual fences” that detect human movement used in some Israeli settlements; G4S, a security company that provided equipment to Israel’s military; and Caterpillar Inc., which manufactured bulldozers that have been used to destroy Palestinian homes.

“Our university’s endowment is tied to the ongoing dispossession of Palestinian people in the name of settler colonialism,” Bahour said.

Hiren K. Lemma ’24, a member of Ethnic Studies Coalition who attended the protest, said she believes Harvard students should stand as allies with campus divestment campaigns.

“It’s only our responsibility and the least we can do as non-Palestinians, as allies, as everyone here for the cause, to stand alongside them in danger and safety,” Lemma said.

The demonstration faced a disturbance. As protesters gathered outside of Massachusetts Hall, a group of onlookers hurled a filled bottle of water into the crowd and were then chased by protesters into the nearby MBTA station, although no one had been hurt.

HOOP organizer Christian B. Tabash ’21-’22 speculated the disturbance may have been caused by people against the causes of the protest.

“This is just a very obvious example of the sort of hostility that people who support Palestinian rights vocally face — that’s just the reality of it,” Tabash said.

University spokesperson Jason A. Newton declined to comment on the rally or on HOOP’s criticisms of Harvard’s investments. Harvard University Police Department spokesperson Steven G. Catalano wrote in an email that the disturbance was not reported to the department.

In an interview following the rally, Tabash said the group will continue to pressure on Harvard to divest.

“We’ll keep making noise, we’ll keep disrupting things and the status quo, which is unjust,” Tabash said. “After the pandemic, we’re just now getting kick-started again, so a lot of planning and organizing is still in the works.”