Vandalism and Native American Heritage Month: 'We Need People to Have Our Backs' 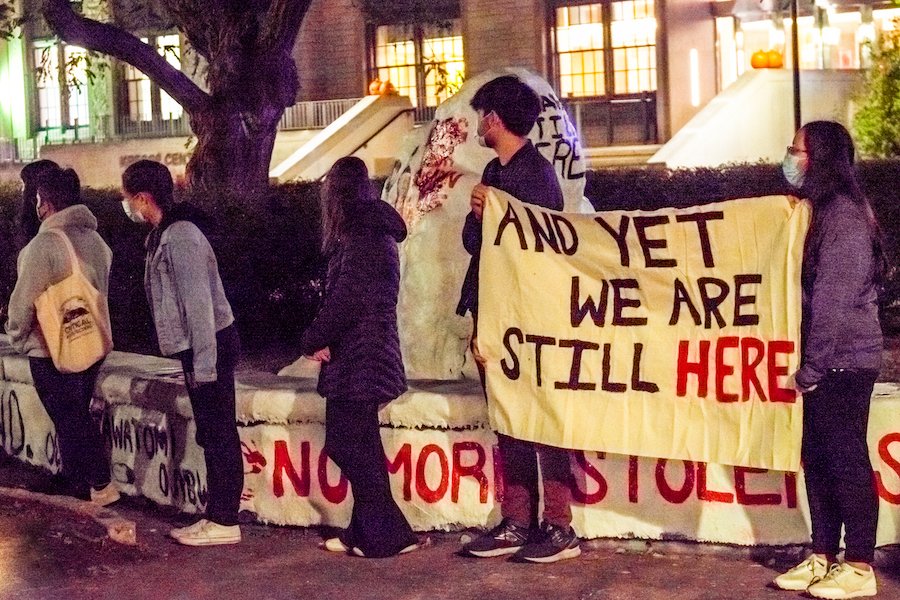 NAISA students led a reflection at The Rock Sunday night in response to the anti-Indigenous vandalism that defaced their painting of The Rock for Native American Heritage Month. By Courtesy of Joshua Perry
By Lena M. Tinker, Contributing Writer

That idea, though resonant, was certainly not what a group of vandals must have had in mind when they covered artwork created by Northwestern University’s Native American and Indigenous Student Alliance (NAISA), meant to commemorate Native American Heritage Month, with anti-Indigenous messaging.

Painting “The Rock” has long been a Northwestern tradition in which students guard an old campus fountain resembling a boulder for 24 hours before painting it to promote a relevant cause or event.

For the first time in its history, NAISA organized an event to paint The Rock for Native American Heritage Month. The artwork included a jingle dress dancer to represent healing, red hands to recognize the ongoing Missing and Murdered Indigenous Women crisis, and a land acknowledgement for Anishinaabe tribes—which include the Ojibwe, Odawa, and Potawatomi— reading, “You are on Anishinaabe land.”

Two days later, NAISA’s artwork had been vandalized. The land acknowledgement was changed to read, “You are on China’s land.” Another message which was painted on The Rock read, “Ojibwe? No way!” Other NAISA messaging — including “Bring our children home!” and “Happy Native American Heritage Month!” — was scribbled over with red and black spray paint.

Art and activism go hand in hand, as we were reminded in the wake of global Black Lives Matter protests. The role of art as resistance was evident when murals across the country were created to commemorate the movement, from the 12-foot black and white portrait of George Floyd painted on the street where he was murdered to the giant yellow letters spelling out “Black Lives Matter” painted too many times to count, including in front of Trump Tower in New York City and on a road near the White House in Washington, D.C.

The defacement of artwork so deeply entwined with cultural pride and identity is a violent act. And yet, it cannot be called unexpected. The very reason we need a space like Native American Heritage Month to provide a platform for Native people to tell their own stories, ironically, enables these stories to become targets for a continuation of anti-Indigenous hate.

The general American public understands very little about contemporary Native life. This is something I have experienced personally, as an enrolled member of the Osage Nation. I have been asked by non-Native people if I could switch tribes, and on many occasions asked what percentage Native American I am. I have been told more than once that I do not “look Native,” which begs the question: What does a Native American look like?

The lack of knowledge about Native people is the result of continuous and intentional erasure of Native perspective by the American public. One need only look so far as the standard American school curriculum: What did you learn about Native Americans in your history classes? I would not be surprised if you were to mention the Trail of Tears, the First Thanksgiving, or the story of Columbus sailing to America — all of them more than likely told from a non-Native perspective.

These stories directly result in erasure of Native history and perspective. They tell a grossly simplified version of a diverse and complex past. Furthermore, they crowd out contemporary Native individuals and communities telling their own histories. Equally problematic is the absence of academic curricula that describes Native life today, enshrining the idea of Native Americans as a figment of the past. The result is an American public that is spoon-fed a few textbook lines about pre-Columbus Native life.

Several states, including Massachussettes, are beginning to address these knowledge deficits through expanded school curriculum. At the same time, many school boards across the country are facing pushback for beginning to engage with a deeper acknowledgement of America’s past, just as Northwestern’s Native students did with their art.

As they enter a college community, many Native students simultaneously leave behind a strong point of cultural connection: Native relatives, friends, reservations. We remember these communities as we enter our campus spaces; we represent these communities, just as the Northwestern students did through their paintings on The Rock. The destruction of that artwork is devastating. Those hateful words do not leave us.

NAISA has decided to leave the vandalized messages untouched on The Rock. This powerful statement is one that gives Native American Heritage Month a darker edge: As we seek to elevate Native demands and Native voices, there are always people who seek to silence them.
Northwestern’s director of the Center for Native American and Indigenous Research and Medill professor Patty Loew, who is a member of the Bad River Band of Lake Superior Ojibwe, said, “We don’t need people to lift us up,” during a post-vandalism reflection event at The Rock. “We need people to have our backs. So when you leave tonight, think about the ways you can support us in our efforts. Because we are demanding change, and we need allies.”