Top Five: Halloween Costumes That Should Have Been 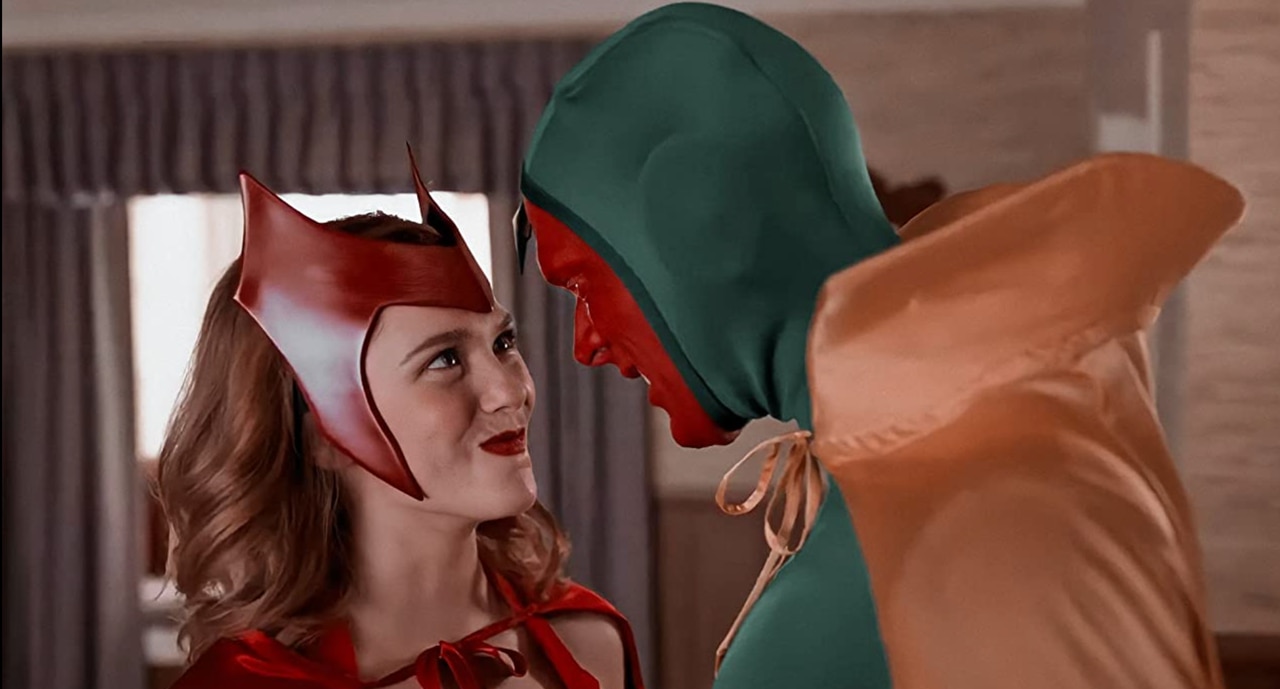 Let’s talk about the Halloween episode of "WandaVision." Namely, Wanda and Vision’s vintage Scarlet Witch and Vision costumes. By Courtesy of Disney Plus
By Ashley Y. Lee, Contributing Writer

Double, double toil and trouble. Fire burn and cauldron bubble… or, something like that? At any rate, the spookiest time of the year is upon us — and no, it’s not midterms. After going through the scariest couple of years of our lives, most of us can be more optimistic about this year’s Halloween: The world has gotten a little bit calmer, a great deal of us are fully vaccinated, and, obviously, this means that Harvard undergrads all the way from our beloved Quadrangle to the far reaches of Mather and Dunster will be participating in some Halloween festivities across campus and Boston. But what was worn? Looking past the fairies, angels, and devils that flooded the streets of Cambridge, here are the top five Halloween costumes and themes that Harvard's campus should have been teeming with this past Oct. 31.

Yes! This was 2021! Way back when, in January of this year, politician Bernie Sanders grabbed a hold of pop culture with just a stoic pose and a deceptively exciting pair of mittens. Easy to replicate, low maintenance, and a great conversation starter with pop culture nerds and Government concentrators alike, the “Mittened Bernie Sanders” is a great throwback to the beginning of the year, when society first started to slowly recover from a worldwide pandemic. All you need to accomplish it is a brown puffer, a blue surgical mask, and[,] of course, mittens.

“It’s Britney Bitch.” After a tumultuous year spent fighting to end her conservatorship, Britney Spears is [once again][CUT] taking over headlines[, and she has the entire world paying attention.][CUT] In light of this refreshed focus on her and her life, we may expect Halloween parties this year filled with homages to “Oops!... I Did It Again” (red latex suit), or “...Baby One More Time,” (the classic schoolgirl outfit completed with certain poofy pink hair accessories). [Maybe the least we, as a campus, can do is support her through this time by attempting to recreate her most iconic late 1990s and early 2000s looks.][CUT]

Y2K, ‘70s, ‘80s, ‘90s: The options are endless. Taking it further back than January of 2021 and Bernie Sanders, decade[-]inspired pieces are honestly such a classy costume choice. Pull out all the stops! Bring back the leather pants and gelled up hair, the swirly patterns and the knee high boots! Retro is in, and a decades themed Halloween costume is that opportunity to recycle the clothes that you currently have stuffed in your far-too-small dorm closet[, and dress to impress][CUT].

“Mugoonghwa kkot e pi yeot seubnida.” “Squid Game” has captured the attention of almost everyone who has access to or knows someone who has access to a Netflix account, and for good reason: The show absolutely delivers on its political undertones and messaging, casting, and (most importantly for the purposes of this article) its costume design. The now-iconic combination of a green tracksuit and white slip-on vans utilizes two common wardrobe items that can easily be transformed into a themed costume that most TV watchers of this year will understand. So, this Halloween, dust off the white slip-ons and straighten out that tracksuit from when you tried to do sports. Also, watch “Squid Game.”

As a part of Marvel’s Phase Four, the studio spent the summer releasing a slate of highly-acclaimed TV series. Of those, “WandaVision'' was certainly one of the best. For good reason: People literally would not stop talking about it. We could discuss the gargantuan budget for the show, the attention to detail, or the acting, but let’s talk about the Halloween episode. Namely, Wanda and Vision’s vintage Scarlet Witch and Vision costumes. Literally nothing more needs to be said. It’s a cute couple costume idea, and fairly easy to execute.

Continuing on this Marvel TV trend, “Loki” also provided viewers with a uniquely “you wouldn’t understand this if you don’t know the show” costume: the muted brown/beige Time Variance Authority (TVA) jumpsuit. The big question is: Will lowly civilians be able to pull it off as well as Tom Hiddleston does in the show?