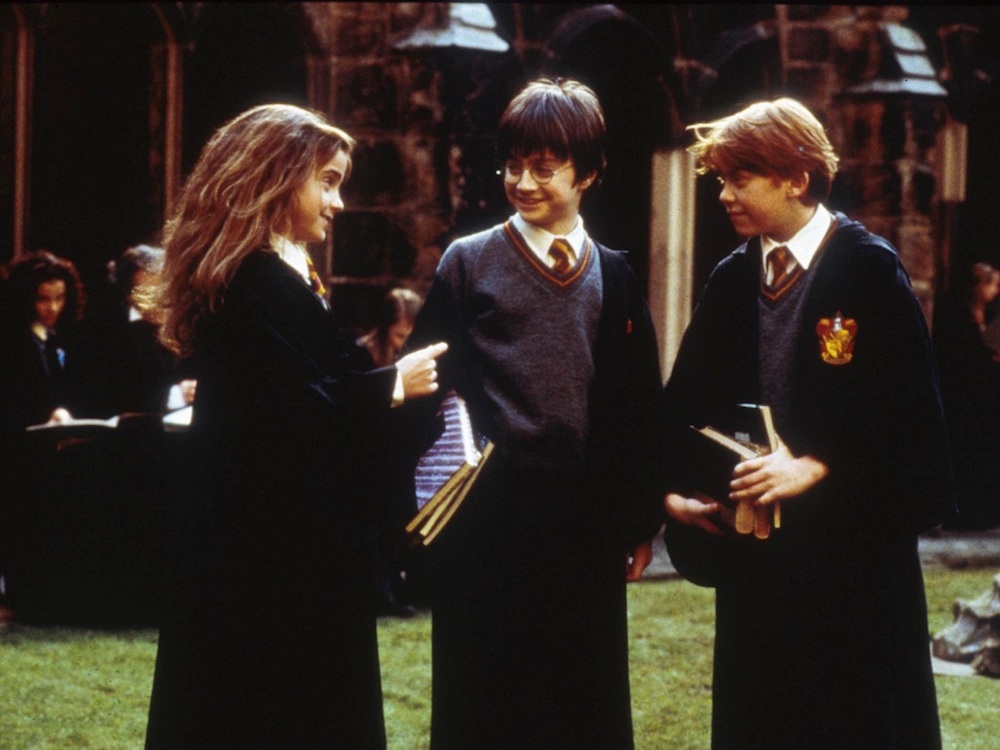 The Podcast that Lived

“When we are open to reading a text as sacred, we are willing to learn from it, and not just about it."
By William S. Hahn and Isabel T. Mehta

Hogwarts. Spells. Quidditch. The Boy Who Lived. As children and as teens, so many of us were transported into the world of “Harry Potter,” J.K. Rowling's fantasy series where anything seemed possible. From brewing potions to fighting dragons, the characters and their stories were a magical, fantastical escape from the real world.

The podcast “Harry Potter and the Sacred Text” revisits the classic series with a new goal in mind: reading “Harry Potter” with the rigor of scripture in order to draw lessons from the fantastical world and apply them to our real one. HPST was started in 2016 by Vanessa M. Zoltan, Ariana N. Nedelman, and Casper R. ter Kuile, graduates of the Harvard Divinity School. Zoltan and ter Kuile, the hosts of the first season, dissected one chapter of the text in each episode through the lens of a central theme. At its peak, the podcast attracted 1 million listeners each month.

The podcast defines its sacred reading process in three parts: trusting the text and taking it seriously, reading with slow and concentrated attention, and reading it with communities who value the text. The idea of reading a secular text through a religious process may seem a bit far-fetched at first, but Zoltan believes there is tremendous merit in doing so.

“When we are open to reading a text as sacred, we are willing to learn from it, and not just about it,” Zoltan says. “We are willing to be changed by the text. Art, even if we don’t go in with that intention, can end up forming us.”

For example, in Chapter 37 of “Harry Potter and the Order of the Phoenix,” Dumbledore explains to Harry that Aunt Petunia took him in “grudgingly, furiously, unwillingly, bitterly, yet still she took you.” Zoltan believes there is a link between this fictional exchange and today’s political climate — she encourages listeners to learn from Aunt Petunia, to take in people in need of a home and help build them a new one. 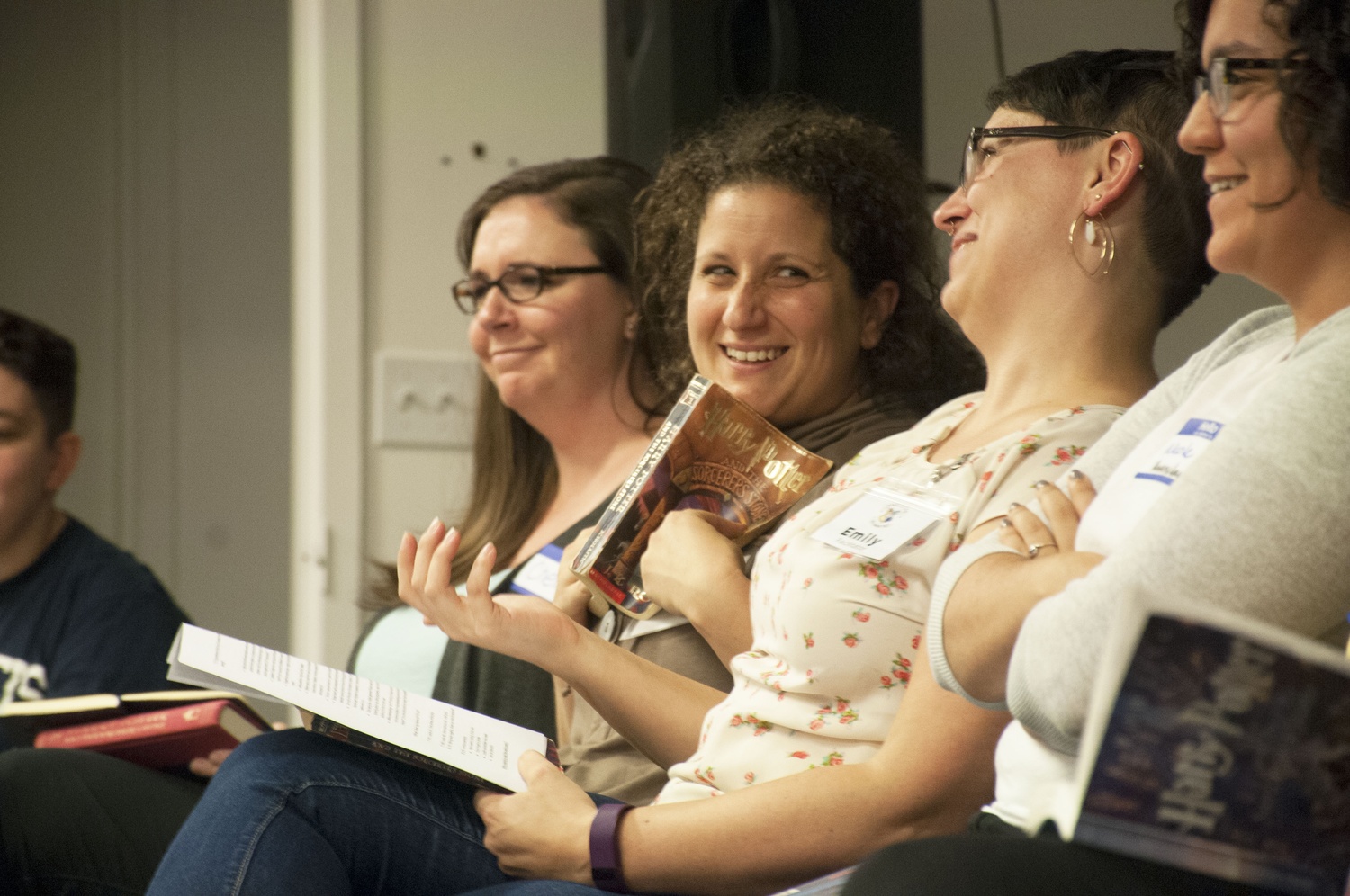 A 'Harry Potter and the Sacred Text' discussion in 2016. By Grace Z. Li

Now in 2021, the podcast is back for series two with a new host team: Zoltan is joined by Divinity School professor Matthew I. Potts, who is also Pusey Minister of Memorial Church. The show’s structure and goals will remain the same as they read through the series again. But this time, HPST is working within a more challenging political context: In 2020, J.K. Rowling tweeted messages that many people considered transphobic and which colored some readers’ memories of her books.

The HPST team immediately released statements on social media and in a newsletter condemning Rowling’s tweets. “We love and support our trans and non-binary friends and listeners. Harry Potter is sacred because we the readers treat it as such. We believe in a Hogwarts that is radically welcoming to all,” HPST tweeted in December.

J. K. Rowling’s transphobia is an extreme example of how the fantastical and real worlds collide: in some cases, Rowling’s beliefs seem to contradict the lessons about empathy the podcast draws from the text itself. But Zoltan and Potts still see value in studying Rowling’s text, and they believe the show can help listeners navigate this tension and continue to find value in their beloved childhood series.

The podcast makes a distinction between the art and the artist, separating the text of “Harry Potter” from Rowling’s tweets.

“The meaning of a text is not determined by the author, and the meaning of the text can be free from the author,” Potts says. He cites his background in theology as helping him understand the complexities in “Harry Potter.” “There are lots of [aspects of] the Christian Bible I find problematic, even offensive and difficult, and I’m used to part of my relationship to the Bible being one of struggle and interpretation."

Zoltan explains that there are many flaws even within the “Harry Potter” books themselves — classist portrayal of house elves, body shaming, and racial stereotyping. But she believes that neither those imperfections nor Rowling’s transphobia should be barriers to a sacred reading of the text. The positive messages in “Harry Potter” about love and tolerance can and do outweigh the author’s recent hateful rhetoric, Zoltan says. A sacred reading can separate the words on the page from the author herself — one of the reasons the HPST team decided to continue for a second series.

For Zoltan, HPST is a powerful force for inspiring change. “It’s about taking a central story and trying to move ourselves to do a braver and better thing,” says Zoltan.