‘There’s Nothing Like It’: Harvard Football Travels to Face Yale in the 137th Playing of The Game 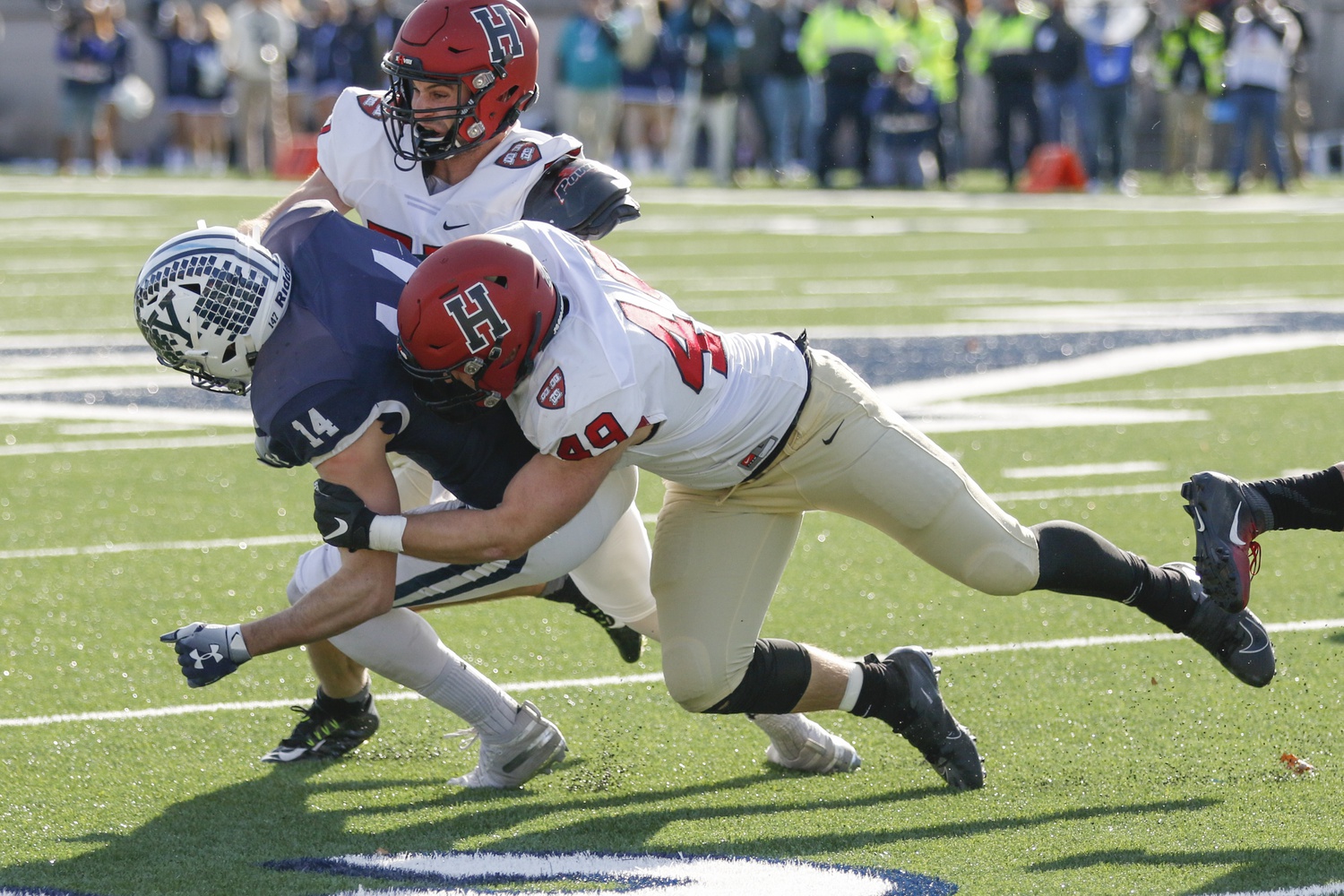 The Crimson and Bulldogs will both wrap up their 2021 campaigns on Saturday, with both teams having an outside chance at an Ivy League title. By Timothy R. O'Meara
By Griffin Wong, Crimson Staff Writer

As the old adage goes, “Eventually, all great things must come to an end.” Harvard (7-2, 4-2) concludes its season against Yale (5-4, 4-2) in New Haven, Conn., in the 137th installment of The Game, which will mark the final chapter in what has been a successful season for the Crimson. Harvard has recorded its 17th campaign with at least seven wins this century, its defense has held opposing offenses to the lowest rushing average in the country, and junior running back Aaron Shampklin became the eighth back in school history to reach 2,000 career rushing yards. Saturday’s contest will also be the final game in the brilliant career of senior linebacker Jordan Hill, who is serving as the program’s 147th captain this season.

The native of Silver Spring, Md., first played for the Crimson in 2016, just one season removed from Harvard’s 17th Ivy League championship. After an illustrious career at Paint Branch High School, in which he served as the captain for two seasons and earned Second Team All-State honors his senior year, he continued to make his impact felt after arriving in Cambridge. The team’s leading tackler in his sophomore and junior seasons, Hill has garnered All-Ivy honors twice and enters his final game needing two total tackles to pass current defensive coordinator Scott Larkee ’99 for fourth in program history.

“It’s crazy to think that this is it. Six years that I’ve been here. I’m extremely proud of what I’ve done. … It’s crazy to be here and to have this opportunity in front of myself and in front of this team,” Hill said. “No two seasons, no two teams are the same … When it’s gone, it’s gone, and having those opportunities to just play with your guys, to work out with your guys, to just grind with the dudes who are putting in that work with you is something that I definitely have valued in my career.”

In his four years, Hill has racked up an impressive resume. In 2016, he set a school record for a first-year player by recording 17 tackles in an overtime win against Princeton, which remains his career high. Overall, he has amassed 242 tackles, including 14.5 for a loss of yards and four sacks. He also won one Ivy League Defensive Player of the Week award in 2019 after totaling 10 tackles, including 2.5 for a loss in a win against Cornell. Although he will not be able to suit up for the Crimson in 2022, Hill is hopeful that he will be able to continue his career at a professional level.

“I’m hoping to stay in this game for as long as I can,” he said. “Right now I’m just focused on finishing out this season strong, but hopefully I get an opportunity to play at the next level, and I’m going to do everything I can to be prepared for that moment.”

Yet, as one of the most valuable players in Harvard’s history plays his final snaps for the team, Saturday’s matchup will also mark the continuation of a long-standing and famous tradition. Since 1875, the Crimson and Bulldogs have clashed on the gridiron 136 times, with Yale holding a narrow 68-60-8 edge. Before last year, when The Game was canceled due to the Covid-19 pandemic, the last time the two schools failed to face off was 1944, during World War II.

Since its inception, the annual contest has produced numerous memorable games, arguably the most famous of which being Harvard’s famous comeback in 1968, when it trailed 29-13 with 42 seconds remaining before managing a 29-29 tie. That showdown featured legendary actor Tommy Lee Jones, who was a guard for the Crimson at the time, and inspired Kevin Rafferty’s critically acclaimed 2008 documentary, Harvard Beats Yale 29-29.

Although the Bulldogs were dominant for much of the series’ early history, beating Harvard eight times in a row between 1880 and 1889, the Crimson has flipped the script since Ivy League play began in 1956, leading the series 36-27-1 in that span. Current Harvard head coach Tim Murphy, who took over the team in 1994, has earned the win in 18 of his 26 previous games against Yale.

“There’s nothing like it, honestly,” said sophomore running back Aidan Borguet about playing in The Game. “Having a long rivalry that’s among the best in the nation [is] a feeling like no other. You have people from all over the country that watch The Game … It’s really something special to be a part of.”

Yet, like all good traditions, each edition brings a new wrinkle. This latest iteration of the Crimson is still alive in the conference title chase, although it will require some help to do so. The winner of The Game will earn a share of the Ivy League championship if both Princeton and Dartmouth, which each have one conference loss so far, lose their final games of the season. The Tigers will travel to face Penn (3-6, 1-5)and the Big Green oppose Brown (2-7, 1-5) in Providence, R.I.

Building off the momentum of its last two games, a 49-21 drubbing of Columbia in New York City on Nov. 6 and a hard-fought 23-9 victory over the Quakers on Nov. 13, Murphy will turn to junior quarterback Luke Emge, who earned the starting job after performing capably in relief of senior Jake Smith in the Oct. 30 loss to Dartmouth. In four games this season, the Lancaster, Pa., native has completed 58.7 percent of his passes for 463 yards, three touchdowns, and one interception. In the Lions contest, he connected with junior Kym Wimberly seven times to make him the Crimson’s first 100-yard receiver since 2019.

Emge will be complemented by a bevy of playmakers, including Shampklin, the superstar running back and All-Ivy First Team selection in 2018, who leads the conference with weekly averages of 96.9 rushing yards and 109.5 all-purpose yards. He has also found the end zone 12 total times, which trails only Dartmouth quarterback Nick Howard (14). Additionally, Borguet returns to the venue that put him on the map, when he took his 11 carries for 269 yards and four touchdowns in 2019. Harvard’s two-headed monster has caused fits for opposing defenses all season, torching them to the tune of 170.2 rushing yards per game.

Harvard’s key to victory may lie on the offensive line, which has been an elite unit this year, opening up holes for Shampklin and Borguet and conceding just 13 sacks, the third-fewest among Ancient Eight squads. On Saturday, though, it will come up against the most dangerous pass-rusher it has faced so far this season, Yale defensive tackle Clay Patterson, who has been an interior force all season, racking up 11.5 sacks in nine games, making him the second-most efficient pass-rusher in the nation, behind only Florida A&M’s Isaiah Land, who has 17 sacks in ten games.

“[Patterson]’s a guy with a high motor. He’s big. He’s athletic. He’s twitched up,” Borguet said. “He seems to be one of their premier playmakers in the front seven, so [we] have to be cognizant of where he is and run our own game plan the way our coaches decide to execute it.”

Patterson is not the only Bulldog capable of getting to the quarterback, though. All in all, Yale has brought down the opposing passer 29 times in nine games, the second-best rate in the Ivy League and eighth-best in the country. Defensive back Dathan Hickey has forced four fumbles in just seven games, the second-best rate in FCS. The Bulldogs also boast a respectable rush defense, allowing an average of 119.3 yards per game.

Yale will also force Emge to succeed early in the possession, as the Bulldog defense has been especially strong on third down, allowing conversions on just 22.6 percent of its opponents’ attempts, which is the lowest rate in the country. The Bulldogs feature athletic players all throughout the field, including linebacker Rodney Thomas II, who ranks 18th in the country with nine pass deflections, and linebacker John Dean, who leads the team with 66 tackles.

“They fly around. They cover gaps. They do what they need to do, and they know their assignments,” Borguet said. “They make plays on the ball, so it’s tough when guys like [Thomas] get in the way of what you’re trying to do. So our coaches are going to come up with a great game plan, and we go along with the schemes that they come up with and we just execute.”

Harvard counters the Bulldog linebacker with a talented Thomas of its own, senior cornerback Khalid Thomas, who has intercepted three passes this season and defended five more. Khalid Thomas’s rate of 0.4 interceptions per game paces the Ivy League, and his teammate, sophomore cornerback Alex Washington is not far behind, with three interceptions in nine games. Additionally, sophomore cornerback Khalil Dawsey, who returned an interception for a touchdown in an Oct. 2 win over Holy Cross, returned last week after a five-game absence. The Crimson’s talented secondary has helped it rank fifth in the FCS in team passing efficiency defense (101.0). Its front seven has also racked up 36 sacks this season, the second-most prolific pass rush in the country.

Despite Harvard’s success against the pass, Yale would probably be best suited to take to the air on Saturday, because the Crimson has wreaked even more havoc on opposing running backs. Harvard has held opponents to just 54.6 yards per game, nearly 15 yards better than second-ranked Sam Houston. Larkee’s unit is led by talented playmakers such as first-year defensive tackle Thor Griffith, who leads the team with 9.5 tackles for a loss this season. Junior defensive lineman Jacob Sykes has recorded seven sacks and junior safety James Herring paces the team with 63 tackles. Together, they have helped the Crimson produce top-ten rankings in third-down conversion percentage (fourth, 26.2 percent), fourth-down conversion percentage (second, 22.7 percent), and red zone defense (seventh, 65.2 percent).

The Bulldogs counter with a prolific passing offense, led by sophomore quarterback Nolan Grooms. The southpaw has shown significant promise with both his arm and his legs, frequently using his athleticism to extend plays. Overall, he has completed 55.2 percent of his passes for 1,307 yards, 11 touchdowns, and five interceptions. He has also added 91 carries for 374 yards and three more scores on the ground.

“He has a lot of confidence,” Hill said. “He’ll make some throws that typically you wouldn’t see from a quarterback, across his body and whatnot, and he has a real knack for extending plays with his legs and getting out of the pocket once the rush does get there, so those are things that we’re all aware of.”

Yale surrounds Grooms with playmakers at the wide receiver position, especially senior Melvin Rouse II, who has caught at least three passes in every game this season. Overall, Rouse, a converted defensive back, has caught 45 passes for 531 yards and a pair of scores. Senior wide receiver Darrion Carrington, who has added 242 yards and three touchdowns of his own, will supplement the Yale attack, and running back Spencer Alston, who has turned his 77 carries into 372 yards and seven touchdowns, will provide support on the ground.

For the Crimson to come out victorious for the 61st time against its archrivals, it will have to do so in a hostile environment, where throngs of Bulldog supporters will undoubtedly come out to the Yale Bowl (capacity: 61,446) in full force. Harvard players hope that they can rely on the busloads of Crimson students traveling down from Cambridge on Friday and Saturday to cheer on the team. The visitors can expect to have a large traveling party, as shuttle tickets sold out in less than 48 hours.

“When we play at Yale, we tend to travel quite a good amount, so it’s nice looking up at your own student section and seeing familiar faces,” Borguet said. “That can kind of calm the nerves from a hostile environment like the Yale Bowl.”