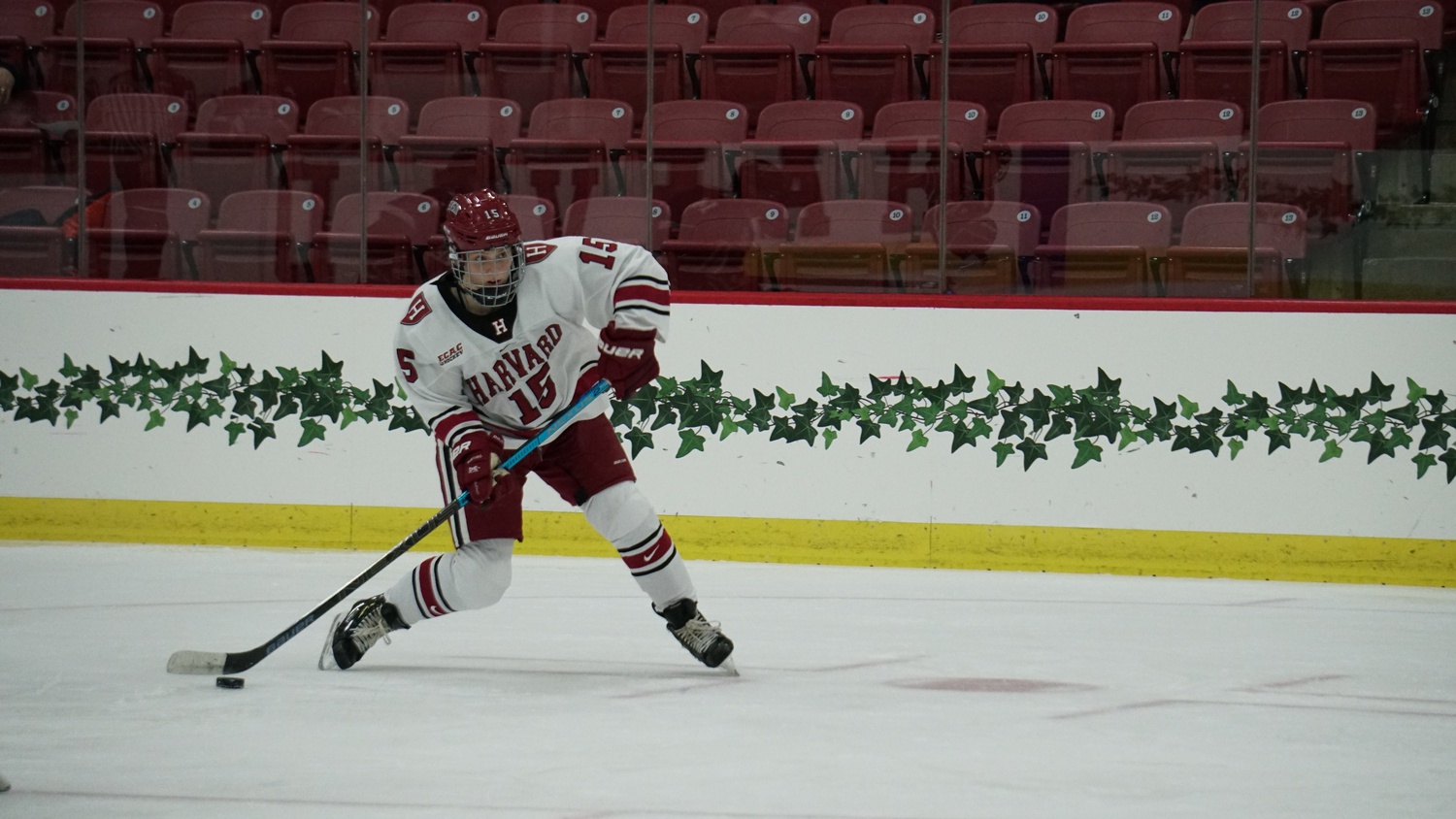 Senior forward Becca Gilmore, who leads the 2021-22 Crimson squad with 11 points, takes a shot against Yale in the 2020 ECAC Playoffs. By Zadoc I. N. Gee
By William C. Boggs, Crimson Staff Writer

As students across campus head home for Thanksgiving break, Harvard women’s hockey will be heading to Durham, N.H., for a matchup with New Hampshire.

The No. 10/RV Crimson (6-3, 4-3 ECAC) returns to the top 10 of the Nov. 22 USCHO poll after securing a 5-2 victory over Brown on Nov. 13, which put Harvard back over .500 in league play and earned head coach Katey Stone her 500th career victory — a distinction that made Stone the first female head coach of a college hockey program to reach the milestone. As Stone looks for 501st win, the opportunity will come against the Wildcats (3-7-2, 3-7-1 Hockey East).

While New Hampshire holds a losing record at the moment, the Wildcats have proven to be a formidable opponent, particularly at home, where UNH actually has a winning 3-2-1 mark at the Whittemore Center. Against common opponent RV/RV Boston College — whom Harvard defeated, 5-2, on Nov. 9 — the Wildcats hung tough twice in two days, losing to the Eagles 2-1 on Oct. 15 and 3-2 on Oct. 16. Of New Hampshire’s seven losses, five have come by two goals or less, and three by a single tally.

Like the Wildcats, the Crimson has also found itself in close games this season. While each of Harvard’s six wins have come by multi-goal margins, two of the Crimson’s three losses have come in overtime. The third, to No. 6/7 Yale, featured a two-goal margin of 3-1. Moreover, all three of Harvard’s losses — Clarkson, Colgate, and Yale — have come against top-10 teams, led by the Bulldogs, whose No. 6 mark in this week’s USCHO poll is their highest this year.

As mentioned, while the Crimson tends to lose close, the team also wins big. Averaging 3.8 goals/game and 34.4 shots/game in the first nine matchups of the season, the Harvard offense has found its stride with senior forward Becca Gilmore providing 11 points so far, which leads the team. Junior forward Anne Bloomer is close behind with 10, and senior forwards Keely Moy and Dominique Petrie remain in striking distance with nine points apiece. Junior Maryna Macdonald paces Crimson defenders on the offensive side of the ice with four points. Continuing with defense, goaltending has been a team effort for Harvard. Senior and captain Becky Dutton and junior Lindsay Reed have each started four times, and first-year Alex Pellicci has gotten the nod in goal once to round out the nine games.

The Crimson will be looking to build momentum in the non-conference in Durham before returning to league play on Dec. 3-4 with a pair of pivotal ECAC contests against Union and RPI. After the early December slate, Harvard will have a few weeks off for exams and winter break but will be back on campus before New Year’s for a Dec. 31/Jan. 1 double-header with Minnesota-Duluth at Bright-Landry Hockey Center.

— Staff writer William C. Boggs can be reached at william.boggs@thecrimson.com.