What Basquiat Revealed to Me About Beyoncé and the Tiffany Diamond 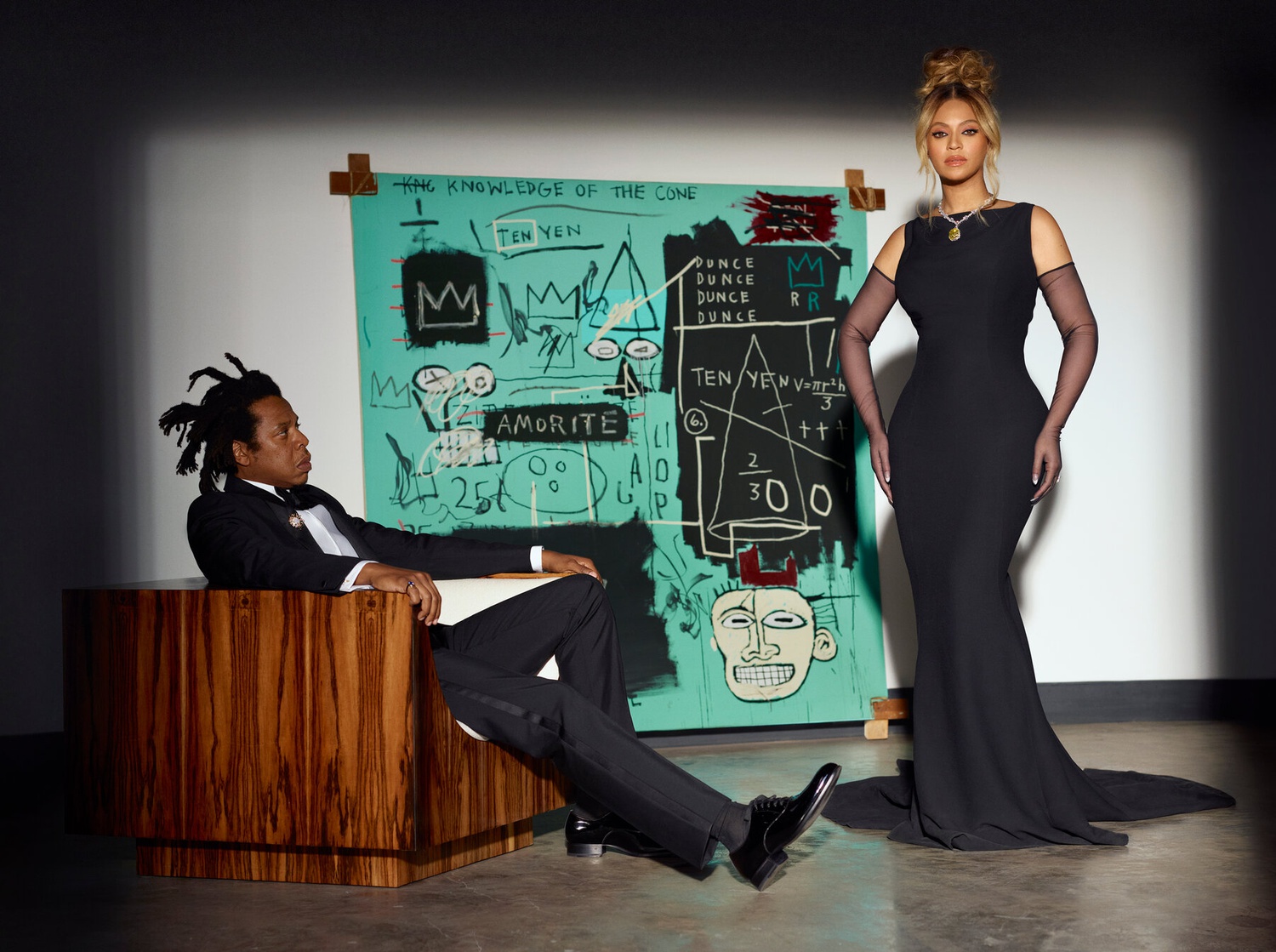 A few years ago, I came across a cryptic black and white screen print on canvas by Black expressionist painter Jean-Michel Basquiat. Through the dark, organized mess of that print, I found in Basquait a refreshing departure from the religious paintings of the Baroque period I was used to analyzing in my art history courses. Most of all, I loved the way his art used street and neo-expressionist aesthetics to challenge classism and racism, all the while encouraging people to reflect on their own morality. His focus on identity and culture made clear to me his views on how art should be appreciated: with special attention paid to its context, to what it could represent beyond and in spite of its monetary value.

To me, Basquiat’s art and the complex themes it explored resisted commodification, and thus existed in tension with the artist’s legacy, as Basquait’s imagery and ideas have since become a kind of status symbol after his death, reserved for those who could afford his pieces. As I continue to observe his motif-filled creations, I wonder: Can commodifying art, specifically art that represents marginalized voices, ever be a means to a revolutionary end? Or does commodification wrongly promote Black artists in spaces that contradict the themes of their art? Beyoncé and Jay-Z’s new roles as ambassadors to Tiffany and Co. — announced in part by a photoshoot the couple had in front of a Basquiat painting — beg answers to these questions.

This year, Tiffany and Co. have been noticeably rebranding in an attempt to garner a new generation of loyal customers. With campaigns like “Not Your Mother’s Tiffany’s” that boldly appeal to younger audiences with younger models and edgier photoshoots, Tiffany’s has been embracing this marketing strategy headfirst.

On Sept. 14, Beyoncé graced her fans’ Instagram feeds with a two-minute-long video of her and Jay-Z’s “About Love” campaign with Tiffany and Co., officially launching the Carters’ ambassadorship to the luxury jewelry brand. Set to Beyoncé’s cover of Henry Mancini’s “Moon River,” this montage of affectionate scenes features shots of the couple in Givenchy around a piano, in front of a rare Basquiat painting, with Beyoncé wearing the iconic 128.54 carat Tiffany yellow diamond around her neck. The couple’s ambassadorship feels like more than just a run-of-the-mill rebranding.

It is no surprise that the Carters were chosen to epitomize the brand moving forward. They, like Tiffany’s, are well-known pop culture icons, both modern and timeless. Their image allows Tiffany and Co. to engage with a new audience, and the campaign’s focus on their love story maintains the romantic charm famously associated with the brand. Beyoncé and Jay-Z built their brands on hip-hop and R&B in the Black community of the 2000s. Their music and business decisions have historically been unapologetically pro-Black and appreciated by marginalized communities (communities not often associated with high-end jewelry brands). Whether Tiffany’s is attempting to appeal to the Carters’ fanbase, their fame, or both, is uncertain.

The irony of the Carters posing in front of a private collection Basquiat is evident: For Tiffany and Co.’s campaign, which does not mention the significance of the painting, the Basquiat is used as a status symbol. In fact, the company’s vice president Alexandre Arnault explained in an interview that the piece was chosen for its color, which resembles the classic Tiffany’s blue. He implies that Equals Pi is an homage to the brand: “We know he loved New York, and that he loved luxury and he loved jewelry." This feels forced for many reasons, namely Basquiat’s rejection of marginalization and classism. It is an interpretation of Basquiat’s art that lacks context, going against the introspection he aimed to evoke in his audience.

Similarly, the use of Beyoncé and Jay-Z to represent Tiffany and Co., without any reference to the couple’s pro-Black politics, neglects the couple’s significance to marginalized communities. In the Tiffany shoot, the Carters are merely billionaires in love, and their privilege drains Basquiat’s art and the cultural significance attached to it of its meaning — and its color.

This irony is exalted by the Tiffany Diamond itself. The diamond, having only been worn by Audrey Hepburn, Mrs. E. Sheldon Whitehouse, and Lady Gaga since its discovery, has a prestigious reputation of its own. It was shaped by Tiffany and Co. jewelers upon its excavation in Kimberly, South Africa in 1877. Though its acquisition was not necessarily associated with a war zone, it is widely believed to fit the description of a blood diamond because it was mined in South Africa during the country’s colonization. According to the company, the diamond is “a symbol of the highest standards of quality and craftsmanship established with the founding of Tiffany and Co. in 1837.” Since then, Beyoncé has only just become the first Black person chosen to bear this symbol, yet the campaign features no acknowledgment of this significance, nor of the role that race relations might have played in the diamond’s acquisition. Instead, the Carters’ love life is the focal point.

As implied by its title, “About Love,” the campaign uses the couple’s alluring love to promote Tiffany and Co. Nowhere does it promise to deliver a strong political or cultural message, but the brand’s largely white history makes the campaign feel inherently subversive. This fact is overlooked by the brand and the celebrities featured in it alike. It seems obvious that the campaign would have benefitted from more context about the artists, the Basquiat, and the Tiffany Diamond. Reflection on any of these details would have left it up to consumers to appreciate the campaign’s use of Black artistry through a more relevant, refreshing lens. Most importantly, the inspiring pro-Black ventures that have gotten Beyoncé and Jay-Z their iconic status would’ve been illuminated and uplifted rather than commodified and exploited.