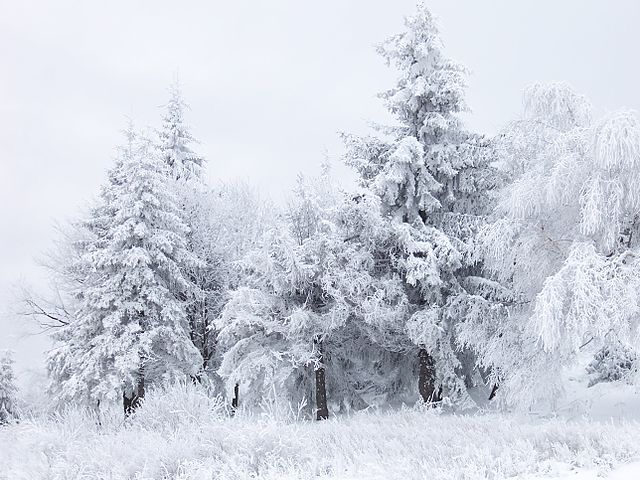 The holiday season can feel like a slap in the face if you’re not expecting it. One moment you’re peacefully eating turkey and stuffing with your family, and the next you’re bombarded by the inescapable red and green month-long purchasing frenzy called Christmas.

It’s understandable if people are not ready for that yet. Maybe some are disillusioned by the commercialism. Maybe students want to focus on their studies for a few more weeks. Or maybe they don’t celebrate at all, or just want to be the Grinch at their holiday parties this year. Whatever the reason, non-observers deserve music this month that isn’t Leroy Anderson’s “Sleigh Ride” or Sergei Prokofiev’s “Troika.”

Holiday season or not, look outside, and the weather is unequivocal. It’s windy, frosty, and stormy, and it calls for winter-appropriate music. Luckily, this playlist of icy music will have listeners shivering in no time. It’s available to listen to here.

Bax was a master of mood-music, writing several nature-inspired tone poems around the time of World War I. You’ll find yourself far from Christmas cheer here, as Bax and his windy writing leave you out in the winter cold for 20 minutes. For a brief moment, we find ourselves in a warmer place, only for the storm to rage once again.

The ballet “Der Schneemann” (“The Snowman”) was Korngold’s first major work as a child prodigy, completed at age 11. In the story, a musician buys his love a life-size statue of Santa Claus, but a group of children prevent him from delivering the gift by throwing snowballs at him and building a snowman outside the woman’s door. Maybe this short love song will fill you with the ballet’s Christmas antagonism too.

Mahler edited this symphony’s scherzo several times, changing it again and again to make the instrumentation icier. He called for the violin soloist to retune their strings for a harsher, more piercing sound. The music is inspired by an image of Death playing his fiddle, so it’s clear that this shivery, ghostly music is sure to quickly ruin any Christmas gathering.

Now three hundred years old, Vivaldi’s revolutionary “Four Seasons” still holds its own as an effective description of winter. It’s no surprise that it was the blueprint for innumerable classical compositions that take nature as inspiration. In this movement, you’ll hear teeth chattering, foot stomping, and shivering as a winter storm rages outside.

The Argentinian Piazzolla wrote his “Four Seasons of Buenos Aires” as a tango-driven response to Vivaldi, which is why it’s next on this playlist. In “Buenos Aires Winter,” listen carefully and you’ll hear some direct quotes from the Vivaldi woven into the dance as you experience a winter in the Southern hemisphere.

That’s not a typo — Vaughan Williams’ seventh symphony, inspired by music he wrote for the 1947 film “Scott of the Antarctic,” is titled “Sinfonia antartica.” You’ll hear the sublime scenery of Antarctica in the first movement, from siren-like wind, to crystalline lakes, to mighty ice shelves. What better place to hide from Santa than on the polar opposite region of his lair?

Ask someone to think of a wintry waltz and they might come up with Émile Waldteufel’s “Skaters’ Waltz.” Much less famous, though just as good, is this Strauss waltz named for a winter-blooming flower whose blooms are reminiscent of miniature snowballs. Dance along as Strauss, the “Waltz King,” paints a post-Christmas Viennese winter.

Though you might be more familiar with Tchaikovsky’s later symphonies, his first is a programmatic gem of the repertoire. The second movement, titled “Land of Desolation, Land of Mists,” develops a single theme for more than 10 minutes before a tortuous climax. The Christmas cynic will surely hear a wrathful North Pole in this movement.

Finnish composer Kaija Saariaho has several works that deal with space, astronomy, and mythology. “Ciel d’Hiver” (“Winter Sky”) comes from her 2002 symphony “Orion,” in which Orion the active mortal hunter is contrasted with Orion the static constellation. As Orion’s constellation again becomes visible to us in the Northern Hemisphere this month, this piece looks up at him.

—Staff writer Leigh M. Wilson can be reached at leigh.wilson@thecrimson.com.