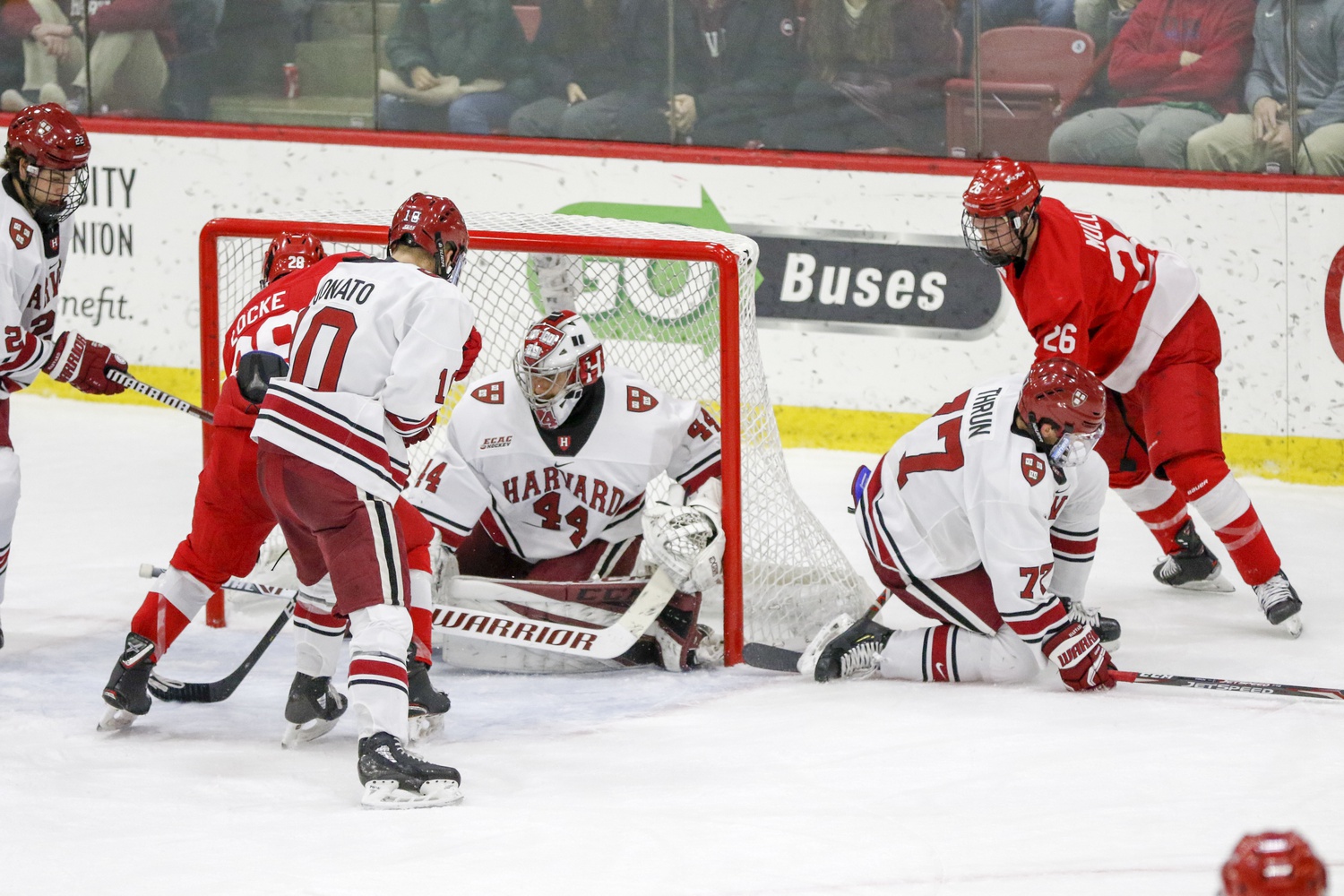 The Harvard University men’s hockey team will face its first major tests of the 2021-22 season this weekend against a pair of conference rivals.

Riding high after a pair of blowout wins to open the season last weekend, No. 9/13 Harvard (2-0, 1-0 ECAC) will put its unblemished record on the line against No. 14/15 Cornell and Colgate this weekend at the Bright-Landry Hockey Center.

Harvard dominated in its first two games of the year against Dartmouth and Bentley, scoring 16 goals in its first 120 minutes of the season. But the Crimson will face a much tougher task on Friday when it will welcome the Big Red (2-0, 0-0 ECAC) to town at 7 p.m. for the first rivalry match between the two squads in nearly two years.

“It’s a good challenge for us,” Harvard coach Ted Donato ’91 said. “It’s nice — and it’s fun — to be able to have the puck go in the net like it has the last couple of nights. But you also have to be able to win a close game, a tight checking game, a game that should have a lot of emotion in it. So I think it's a good test for us.”

Harvard and Cornell, whose storied hockey rivalry dates back to the early 1900s, last met in January 2020 at Lynah Rink in Ithaca, N.Y., where they fought to a 1-1 tie. Harvard has not beaten Cornell at home since 2016. The last time the two teams met at Bright-Landry in December 2019, the Big Red claimed a 3-1 victory, jumping out to a 2-0 lead in front of a Cornell-friendly packed house and never looking back.

This season, the Crimson was powered in its first two games by a standout performance from junior defenseman Henry Thrun, who was named the ECAC Hockey Player of the Week after notching eight points in the first pair of contests with a goal and seven assists. Thrun tallied five assists in Harvard’s 7-3 win over Bentley, becoming the first Crimson player to do so since 2002.

Cornell also opened its season with a pair of overtime wins last weekend, meaning that one perfect record will be shattered Friday. The Big Red opened its 2021-22 campaign with a two-game sweep of Alaska.

“Can't wait to get started,” said Harvard junior forward Nick Abruzzese of the Cornell matchup. “That’s the type of game that you miss [in] a year-and-a-half you don't have.”

The Big Read appears less fearsome than it did two years ago, when it was the top-ranked team in the country. Cornell features a cluster of new faces at the blue line and in net, including three goalies who had never played in a college hockey game before this season. But the squad has also returned a group of key forwards. Upperclassmen have scored three of the Big Red’s four goals so far, including both game-winners last weekend.

Harvard will welcome Colgate (5-4, 0-0 ECAC) at 7 p.m. Saturday before turning right around to face Northeastern (5-3, 2-2 Hockey East) on the other side of the river Monday night in a cross-town non-conference showdown. Colgate lost both of its games last weekend, but each by only one goal to No. 10/11 Western Michigan, falling 6-5 before turning around for a 2-1 overtime loss to the Broncos. Meanwhile, the Huskies are coming off of a pair of conference wins against Maine last weekend, 5-0 and 3-2. Before facing the Crimson on Monday, like Harvard, Northeastern will also have its hands full this weekend with a pair of conference games, squaring off with New Hampshire twice.

“We’re a young team, we’re going to have to be able to win against different styles if we want to have some success,” Donato said. “This whole weekend is a challenge — certainly starting with Cornell, but playing three [games] in four nights should be a good test for us.”