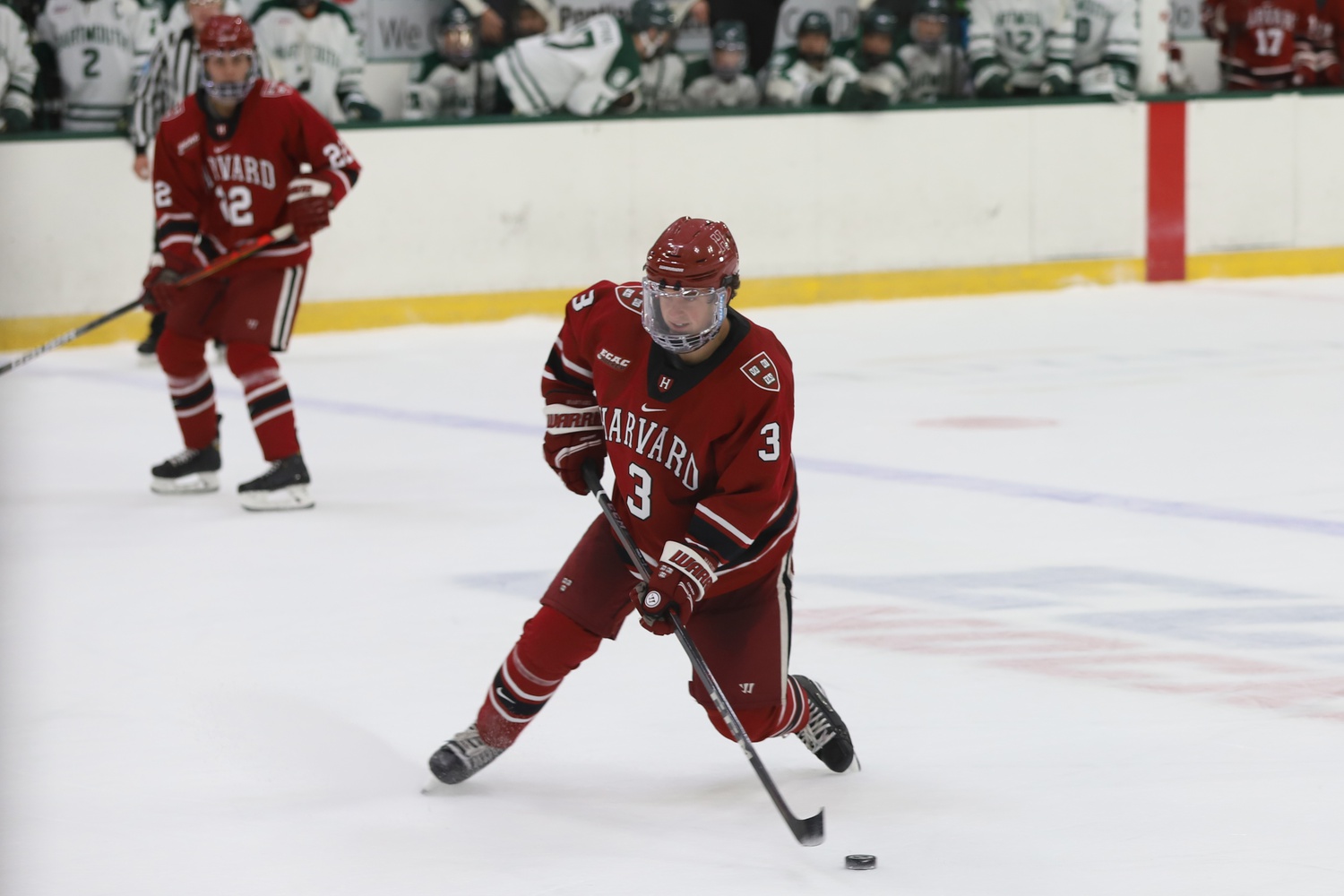 Junior defenseman Henry Thrun handles the puck in Friday's win over Dartmouth, a game that saw him score once and add two assists. Thrun followed up Friday's performance with five assists on Saturday against Bentley to complete an eight-point weekend. By Owen A. Berger
By William C. Boggs, Crimson Staff Writer

No. 13/9 Harvard found the net early and often against Bentley on Saturday night in the first men’s hockey game at Bright-Landry Hockey Center in over 600 days, cruising to a 7-3 win over the Falcons. Powered by a five-goal first period, the Crimson (2-0, 1-0 ECAC) built a lead too insurmountable for Bentley (3-4, 1-1 Atlantic Hockey) to overcome. Together with Friday’s 9-3 win over ECAC rival Dartmouth, Harvard’s two blowout victories helped it ascend in both the USCHO and USA Today polls and set up a marquee rivalry matchup with No. 15/14 Cornell on Nov. 5.

For the second consecutive night, the Crimson scored inside the first two minutes. After sophomore forward John Farrell funneled a puck towards net, junior forward John Farinacci managed to collect it before it reached the goal, elude the defense, and tuck it past Bentley’s sophomore goaltender Nicholas Grabko for a 1-0 lead. Junior defenseman Henry Thrun added an assist on the play — his first of five on the night. Having already tallied a goal and two assists on Friday, the five-assist performance brought Thrun to a whopping eight points on the weekend.

“[Thrun] is picking up after a really strong freshman year,” head coach Ted Donato ’91 said. “He was excellent in the World Juniors, and I think right from the outset has been a leader for us. His calling card a little bit as a player is still being a solid two-way defenseman.”

Special teams again played a huge role for the Crimson as the power play picked up where it left off from the night before against Dartmouth. Still within the first five minutes, Farrell connected on a one-timer to cap a play of tic-tac-toe passing from Thrun with a secondary assist from junior forward Nick Abruzzese.

“Looking at their [penalty] kill before the game, we saw that there might be an opening there to skip that pass through the seam,” Farrell said. “So [I] kind of made eye contact and saw it was going to swing over. I just tried to put it on net, because from that angle, it can be tough for the goalie to react to anything.”

Before the first period’s end, Farrell notched a second power-play goal, again assisted by Abruzzese and Thrun, to make the score 5-1. By night’s end, the Crimson had gone 2-for-5 on the power-play, following up on a 3-for-6 performance from the previous night against the Big Green.

Harvard’s fifth goal, coming with 55 seconds remaining in the opening frame, both capped an explosive period and stemmed any Falcons momentum. Shortly after Harvard’s fourth, Bentley found its stride in the transition game, generating an odd-man rush off a mishandled Crimson blue-line pass. Graduate forward Phil Knies settled the rush before picking out sophomore defenseman Drew Bavaro, who made no mistake with the incisive feed, finishing past junior goalie Mitchell Gibson on a breakaway. Despite the smart finish by Bavaro, Bentley did not manage to make it to the locker room with the last laugh thanks to the Harvard power play.

In the first, Gibson mostly held down the fort in net for Harvard, backing first-period penalty kills with a series of well-controlled saves. By period’s end, he had made eight saves, and on the night, Gibson contributed 18 saves on 21 shots on goal.

Grabko, however, did not return for the second period after surrendering five goals on 14 shots. Junior goalie Jason Grande entered the game as a replacement, and the Falcons seemed to respond to the change. Just 1:33 into the second, Bentley cut the deficit to 5-2 after a Knies strike. Bavaro provided the secondary assist to get to two points as well. Graduate Kohei Sato would join Knies and Bavaro with multiple points on the night for the Falcons.

With the margin back within three, Crimson sophomore forward Alex Laferriere scored his first career goal, picking up a ricochet off the end boards and depositing it into an open net, and from that point forward, the Falcons did not draw within less than four again.

“It was a good win for us. Obviously, a Bentley team that's been dangerous this year, you know, winning at Ohio State and against [Boston College],” Ted Donato said. “We certainly have some things that we need to improve on, but a lot of good signs, and I think anytime you can win the first two games of the season, that's a great start.”

Harvard thought it had claimed a 7-2 lead when senior forward Jack Donato made a high tip off a point shot. The play went to a video review and was overturned for high-sticking as it was determined that Donato had made contact with the puck above the crossbar. First-year forward Matthew Coronato, however, did complete the Crimson touchdown with a highlight-reel, do-it-yourself strike.

The Falcons added the lone goal of the third period when Sato slid the puck along the ice from the blue line before it deflected off of Thrun’s foot and into the back of the net. As the score settled at 7-3, neither team would find the goal again for the final 11:30 of gameplay, although three penalties did fill the last few minutes. On the night, Thrun led the way for Harvard with five points (zero goals, five assists), followed by Farrell’s four points (two goals, two assists) and Abruzzese’s three points (zero goals, three assists).

The Crimson will return to action next Friday night with a rivalry matchup against the Cornell Big Red. In 2019-20, Cornell defeated Harvard once before the Crimson and Big Red skated to a tie at Lynah Rink in Ithaca, N.Y. Cornell boasted No. 2/2 and No. 1/1 rankings heading into each of those matchups with Harvard, but on Nov. 5, Harvard will enter with the slight edge in the polls in what promises to be a pivotal early-season matchup in the ECAC.

“Can't wait to get started. [Cornell is] the type of game that you miss in the year and a half you don't have,” Abruzzese said. “No doubt about it our biggest rival, and the rink should be pretty full. .... It's gonna be a good crowd, good energy — this is the kind of game you play for. And I'm really excited to see how we come out and play.”