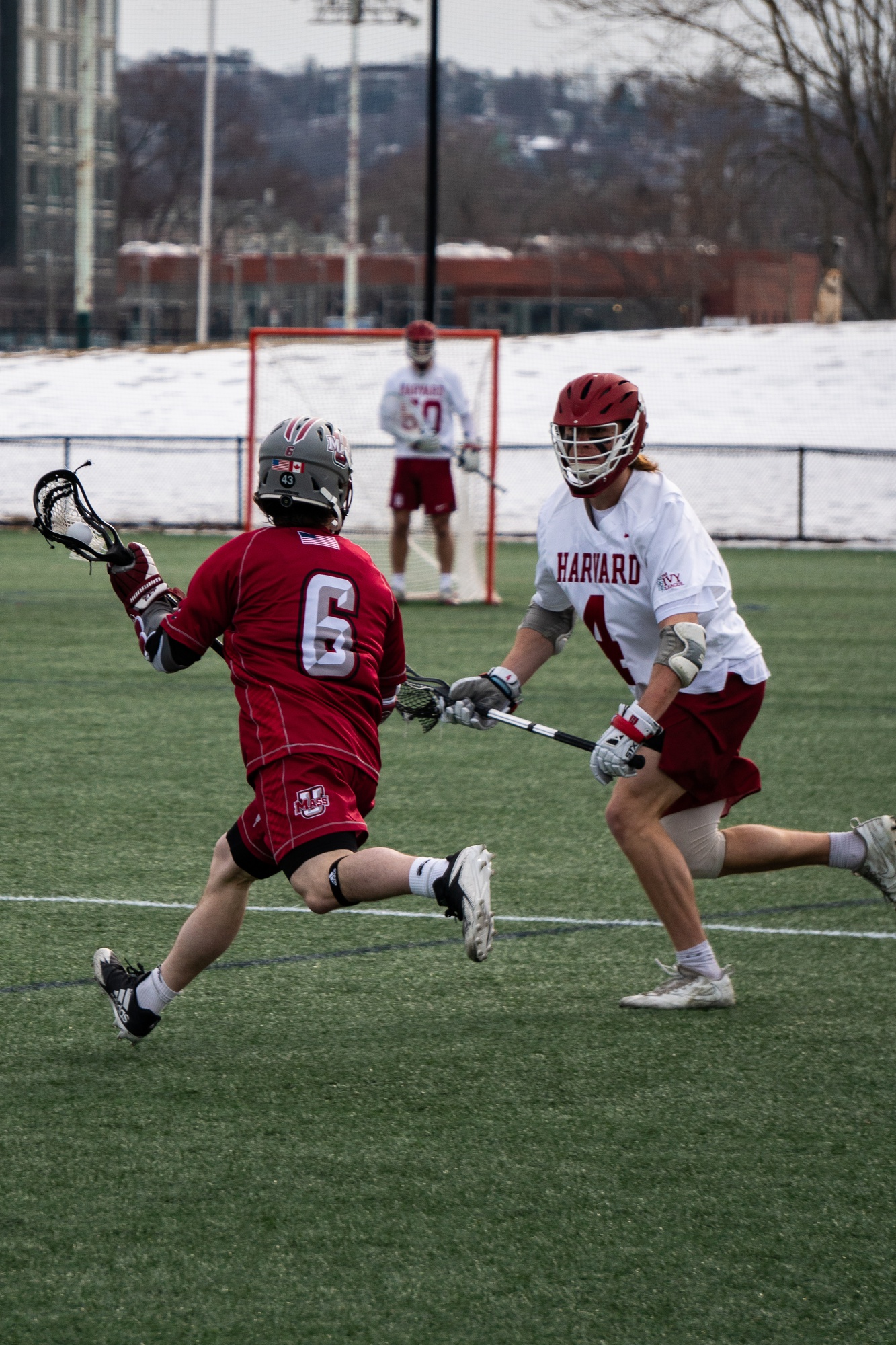 As 2022 men’s lacrosse co-captain, senior Charlie Olmert has high hopes for his return to the field for the first time in nearly two years. Olmert will serve alongside senior Kyle Mullin, but the captaincy is not the only honor that Olmert has received recently as the midfielder and Annapolis, Md., native also became a Rhodes Scholar Finalist. Nonetheless, achieving the rank of captain holds a special place in Olmert's heart and has granted the senior a new perspective on his tenure on the team.

“[The captaincy] definitely means a lot. It’s probably the biggest honor of my life, just to have your peers recognize you for the things you contributed to the team, whether on or off the field, for the past four years, means a lot. And it means a lot also because it is a big responsibility,” Olmert said. “I have to show up as my best self every single day, no matter what is going on, because that’s my job, and that’s what my teammates elected me to do. So, it means a lot, and it’s not something I take lightly. It’s a responsibility I’m happy and proud to have.”

Olmert has played lacrosse since he was four years old. He said that it feels like the sport is of his DNA. The sport has meaning to him beyond just winning or losing and serves as a bond that he shares with his family.

“The sport means a lot to me because it’s kind of a part of my family and my community, having played since I was probably four years old. My dad and uncles all played in college, and my dream has always been to play lacrosse at a high level.”

Looking forward to the 2022 campaign, Olmert believes that the team gels because there is a sense of camaraderie between the players. He likened the support system to that of having a family while at school. Additionally, Olmert highlighted an additional tight-knit quality of the team given a mutual understanding of the squad’s objectives.

“I think that everyone that… was recruited here came here with the goal of building a program and taking the team to new heights,” Olmert said. “We all have to figure out how we are going to get there. What are we each willing to put into it? So, I think that everyone on the team is very driven. We are all trying to figure out how to set our goals, which is being at the top of the Ivy League and competing for the national championship.”

Olmert shared his experiences as a student-athlete, balancing pursuing academic excellence while also participating on the lacrosse team. He said that at times it can be challenging, but that ultimately the gratification that comes with performing well on both ends is worth the turmoil of balancing practice and school.

“There is an inherent tension there. Because I want to pour myself totally into the academic side of things, and sometimes that takes away from stuff I can do on the other side of the river. And then there are times where I stay late and practice and then am scrambling and behind on homework. So, there is a tension there at times,” Olmert reflected. “The balance comes because they're inherently similar. And they are sort of these competitive environments at the end of the day. Whether I’m playing lacrosse on the field and practicing against my teammates, or in a game against another team, I want to do the best I can possibly do, and put the best version of myself out there. And it’s the same thing with school. It stinks sometimes doing homework and whatever it may be, but if I’m going to put my name on an assignment, I want it to be the best work I can possibly produce.”

Olmert is high-achieving both on the field and in the classroom, so when asked about how he handles stigma that athletes are jocks, or not as bright as other students on campus, he said that he understands that there is a stigma around being an athlete even though athletes comprise about 20 percent of Harvard’s student body.

“I think that something that can be lost on people sometimes is looking at athletes as just these kind of big people, people who were born with talent. And because they ran fast, they had doors open for them. I think from the outside looking in that it can be really hard for people that don’t play sports to understand the amount of work and time and absolute hundred percent dedication that varsity athletes pour into their sports. I can’t speak for every team, but I know, on my team, the absolute amount of pouring one’s heart into the sport that every single person on the team has put in.”

Continuing, Olmert put student-athletes into the greater context of the pursuits of Harvard students.

“It’s similar to Harvard letting in the best trombone players, or the person destined to go to Broadway. People on the team have put in similar amounts of work, so I think that they bring something unique to campus. There are a lot of really driven, really smart, inquisitive guys here who learned a lot and grew a lot academically over the course of their four years. Harvard gives so much to them, and I think they provide a unique perspective that other student experiences don’t have.”

In the interview, Olmert touched on his status as a Rhodes Scholarship Finalist. When asked about his motivation for applying, Olmert admitted that at first he was intrigued by the selectiveness of the scholarship. However, he quickly realized that applying solely for clout would not get him very far in the application process.

“I went back and forth a lot of times on whether I wanted to apply, and even though I didn’t get it, I’m definitely happy I went through the process. When you’re writing the essays, you can’t make up your way through it the whole time. I had to think deeply about what I want to do with my life, what I want to do as a career, what I am genuinely interested in.”

Olmert, a Hist and Lit concentrator, is studying the Federal Reserve and economic policy. Writing his thesis on the topic, he came to admire Jerome Powell and the non-traditional career path that led him to lead the Federal Reserve.

Olmert said that he’s “interested in the Federal Reserve and economic policy. The whole [Rhodes Scholar] application process crystalized that for me.”

Olmert said that he does not have plans to attend graduate school now that he will not be studying at Oxford through the Rhodes program. During the Covid-19 pandemic, Olmert, who was initially slated to graduate in the class of 2021, took a year off from classes and preserved athletic eligibility.

“I think taking a fifth year… gave me a chance to back away and realize how special it is to go to school here and to have eight semesters to be an undergraduate and study whatever you want. It made me think critically about what classes I really want to take”

Transitioning away from his application, Olmert delved into how he thinks the team is shaping up for the upcoming season.

“I think the team’s looking great. We have a bunch of young contributors on both sides of the ball that are going to be stars over the course of their careers and stars right away as freshmen and sophomores. So that’s been really cool to see those guys come into their own over the course of the fall.”

In regards to the upperclassmen, Olmert admires his peers. He commented on the resilience they have shown bouncing back from an unconventional year with Covid-19 derailing the team’s season, and pushing many of the guys to take time off from school to preserve their eligibility.

“I think we have really strong leadership across the board with the junior and senior classes. Every single junior and senior here is a guy who has had an odd experience on the team, having taken a year off and having had the year canceled.”

When asked about which underclassmen he believes will make an immediate impact on the team, Olmert immediately named Sam King, Andrew Perry, Andrew O’Berry, and Owen Gaffney.

“Sam King is a total stud. … He will definitely be an impact player for us. … Andrew O’Berry is a two-way midfielder who’s just an athletic beast and plays hard and smart. … Owen Gaffney and Andrew Perry are two guys on the offensive side, people who contribute right off the bat.”

When asked about clearing, which is something head coach Gerry Byrne said the team needed to improve on after its fall scrimmages, Olmert said that the team has emphasized the concept, as clearing is something that they, if focused on, can tangibly refine before the start of the spring season.

In addition to clearing, Olmert gave his insight into how the defense is performing.

“Something that I can speak to about playing defensive midfield this year is our focus on being great at six-on-six defense, and how that really just starts with taking pride in playing hard defense and everything we do,” Olmert explained. “Our stance on ball and how we exit… comes from being dialed in every second that the offense possesses the ball. I think that the defensive team has gotten way better over the course of the fall, and I think that we saw that in our scrimmages. We played great in settled six-on-six defense.”

Even though he is playing defensive middie this year, Olmert has experience playing on both sides of the ball. He has had the chance to play with, and against, the attack, and is excited by how the team is performing as a unit.

“It looks like it is really gelling,” Olmert commented. “I think one guy who has been particularly instrumental… is Hayden Cheek. He’s an off-ball attackman, and he’s just a cerebral and smart player. … Over the years when I’d play offense with him, everything seemed to work better, and everyone all the sudden was open when he was on the field.”

Overall, Olmert believes that the team looks promising this season and is excited to see what the spring brings.

—Staff writer Katharine Forst can be reached at katharine.forst@thecrimson.com.