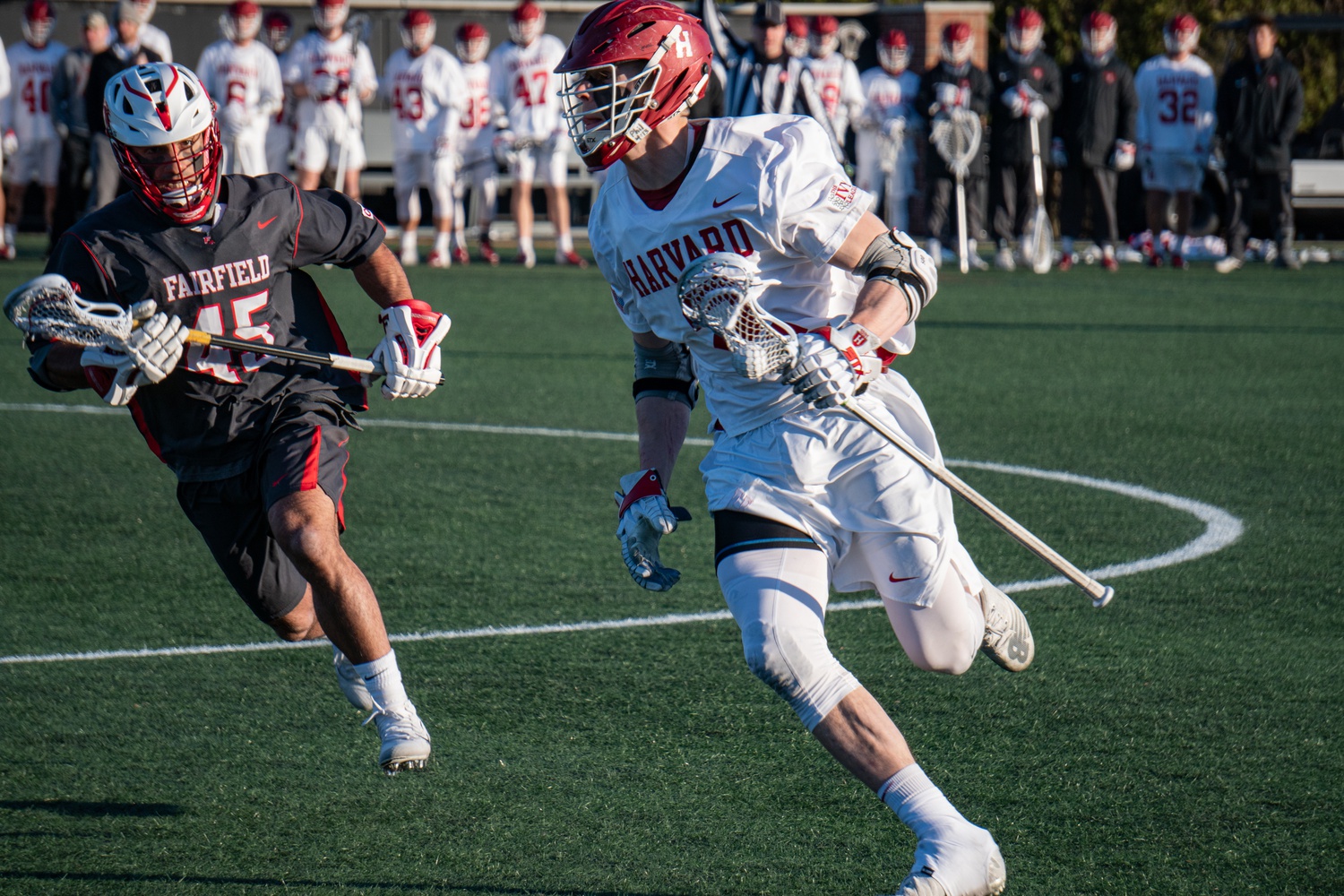 Before scrimmaging High Point and Richmond in Baltimore on Oct. 23, Harvard men's lacrosse last took the field on March 7, 2020, in a 15-12 win over Fairfield. By Brendan J. Chapuis
By Katharine Forst, Contributing Writer

Hired as head coach of the Harvard men’s lacrosse team in 2019, Gerry Byrne has been tasked for the last two years with creating and fostering a team culture during the Covid-19 pandemic. With only four games under his belt due to the truncated 2020 season, Byrne found creative ways to build his unit.

He emphasized the importance of his players wanting to get better, saying that growth comes from their desire to improve, not his mandates to practice.

“There’s only so much time because of NCAA and Ivy League rules that we can be on the field. And if it was just me coaching them, they would never get there,” he explained. “So peer to peer mentorship, coaching, film study, doing things when I’m not around, is kind of an indicator of where your program is going, and I see examples of that, dozens every day .… It foretells future success for us over the next few years.”

To maintain the team’s connection during the pandemic, Byrne assigned a book and a documentary for the squad to read and discuss. However, he held only a handful of full-team Zoom sessions during the 18 months away from campus, emphasizing the benefits of student-driven connections.

“Part of that was them going to train in Georgia and going to visit each other across state lines and across the country,” he explained.

With many players taking time off in order to preserve academic and athletic eligibility, Byrne’s squad will include a large group of upperclassmen this spring.

“They enjoy each other’s company, they hold each other accountable. They set standards and enforce them,” he said.

Byrne’s focus on a player-led team bridges a divide between performance and participation. When discussing how having a larger team would impact the dynamic cultivated in what is normally a much smaller roster, Bryne was insistent that his upperclassmen were instrumental in promoting an inclusive and supportive culture. His community-based approach allows his starting players to excel on the field while helping the entire team develop.

The Crimson is coming off of two decisive wins against High Point University and the University of Richmond at a play-day at Johns Hopkins sponsored by the HEADstrong Organization. The scrimmages mark the first time the Crimson has taken the field since spring of 2020.

“I was happy with our performances,” Byrne said. “Obviously it’s always happy when you score more than your opponent. But there’s plenty of things for us to work on. You know, I think we have to get bigger and stronger, and in better condition.”.

Early in the season, he has focused on developing his players’ fundamentals and understanding of his program structure.

“You have to figure out what combination of film and strength and conditioning and practice you could do because you can’t do all of them as much as you would like. So, I chose to work on teaching our guys how we play,” Byrne said.“As we head into this next phase, that November, early December phase, we’re probably going to get to the point where we’re lifting and conditioning three or four times a week.”

In the wins over High Point and Richmond, Byrne was happy with the way his squad connected on the defensive and attacking ends and felt that goalie play was strong. However, despite the victories, he admitted that Harvard had not found as much success clearing the ball as he had hoped. Byrne said that the team will place a specific focus on that aspect of the game this week in practice.

“We have to look at either how we are coaching it or maybe the guys’ lack of understanding — maybe we’re not doing the right drills,” he explained. “Maybe we’re not teaching it in the right way, but that was a real shortcoming, so those will be our areas of focus here in November.”

This is a critical area for the team to excel at because the shot clock means that it is imperative for the defensive players to quickly transition the ball up the field to utilize the entirety of the timing on the attacking end.

Team chemistry was a particular focus for the Crimson in the weekend's scrimmages, as two new classes of players took the field for Harvard for the first time. Connection was apparent early on in the offensive end, as junior midfielder Isaiah Dawson fed assists to senior attacker Austin Madronic. Playmaking by underclassmen, specifically sophomore attacker Sam King and first-year midfielder Andrew Perry, stood out for senior midfielder and face-off-get-off specialist Steven Cuccurullo, who praised the underclassmen after the game.

“The freshmen and sophomores playing in their first college scrimmage played really well and were a huge role in the team’s success,” he said.

Harvard is set to take on its first Ivy League opponents since 2019 under Chris Wojcik ’96, who guided the Crimson to a 60-57 record over his eight-year tenure as head coach. Before coming to Harvard, Byrne had coached Notre Dame for a total of 16 seasons, and his team has already exhibited grit in its few performances under his tutelage. He improved Harvard’s defense from 71st in the nation to 34th and took the man-down squad from 41st in Division I to fourth, giving up just one goal for all four games played in 2020. His recruiting class for the 2024 division contains three Inside Lacrosse Power 100 players on the incoming freshmen rankings list, which is promising for their future contributions to the team.

Looking into the upcoming season, Coach Byrne said he is figuring out how to best allocate the six hours a week he is allowed to spend coaching his players and is excited for the season to come.