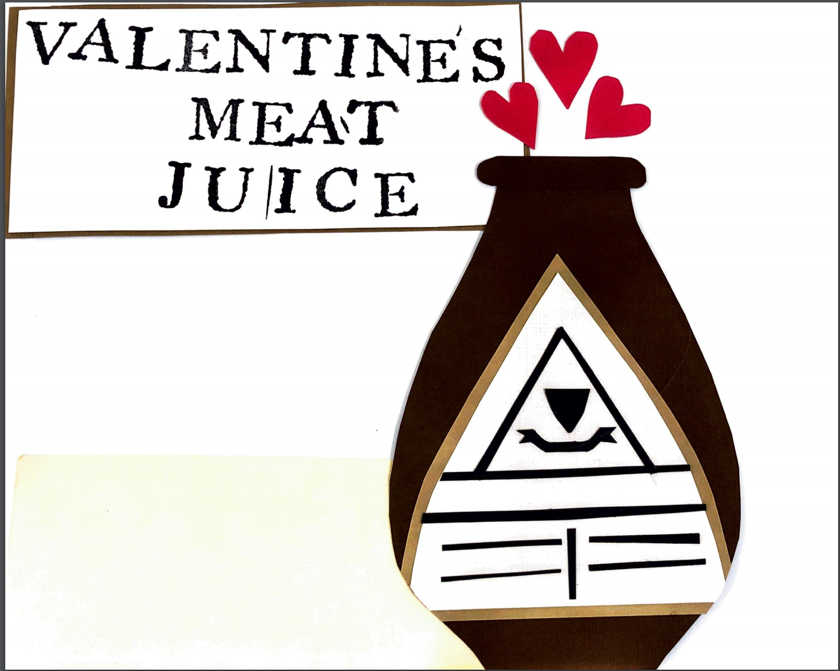 By Courtesy of Ana Castillo Ericksen
By Katie Ana Baca, Contributing Opinion Writer
Katie Ana Baca ’11 received her Ph.D. from Harvard in 2019 and is a preceptor in Harvard College’s Writing Program.

America is fast approaching its first Valentine’s Day with the novel coronavirus. The pandemic seems likely to challenge the traditional understanding of Valentine’s. What will Valentine’s Day look like in a year when masks and physical distancing are advised on even this most romantic holiday? If you’re distressed by this prospect, a review of Victorian medicine suggests an interesting cure to your 2021 Valentine’s ails. Down with the flu? Exhausted by Expos papers or CS50 homework? Lost your mojo? Sip on some Valentine’s Meat Juice, a 19th century patent medicine that claimed to provide the health benefits of raw meat without the digestive struggles. But, before you run out to find this tonic, let’s dig into its history.

Like any good valentine, this one involves romance. In 1870, a love-struck Mann S. Valentine was desperate to nourish his wife, who was suffering from a severe digestive disorder. Valentine experimented to find a cure. The resulting love potion? Valentine’s Meat Juice. Dosed orally or rectally, this juice was used to treat ailments ranging from influenza to gastritis. Made from only the finest cattle (“Texan beef will not do”), it claimed to provide “the germ of life … in a state ready for immediate absorption.”

Valentine was not the first to debut such a product. In 1847, German chemist Justus von Liebig had manufactured a similar meat extract. Liebig is famed for developing the hands-on lab approach to teaching chemistry; multiple Harvard faculty members trained under him in Germany. By 1899, Liebig’s product was trademarked as OXO, of the still-widely used European OXO cubes. Though marketing beef blocks as romantic may seem like a stretch, in the 1950s OXO leaned into mid-century gender tropes, advertising its bouillon cubes as an affordable way for housewives to give “a meal man-appeal!” Like OXO, Valentine’s Meat Juice was a commercial success. Thanks to this energizing tonic, Valentine amassed enough wealth to establish and endow a museum.

A rosy tale for a Valentine’s product? Not quite. Guns and roses would be more apt. On July 2, 1881, just months after his inauguration, U.S. President James A. Garfield was shot twice at point-blank range. Desperate physicians sought to save him. Alexander Graham Bell, famed for inventing the telephone, developed a metal detector especially to locate a bullet within Garfield. Physicians supplemented this innovative technology with none other than Valentine’s Meat Juice. Per the Boston Medical and Surgical Journal, on July 12 Garfield consumed: “... twenty-nine ounces of milk, with an ounce of rum ... a small slice of milk toast … a small sandwich of scraped raw beef, with two teaspoonfuls of Valentine's beef juice and an ounce of Tokay wine of 1868.” Rum, wine, meat juice, and raw beef. Somehow, Garfield survived for 79 days after being shot, with his physicians publicly reporting on everything from his pulse to the size and consistency of his bowel movements.

Just weeks before Garfield’s final sips of Valentine’s Meat Juice, 19-year-old American Florence Chandler married Englishman James Maybrick, who was more than double her age. Alas, their marriage was not happy: Both soon had affairs. In March 1889, Florence boldly traveled to London for a hotel getaway with her paramour, a Mr. Alfred Brierley. Just two months later, on May 11, 1889, Maybrick died, and this is where things really get juicy (or shall we say… meaty?). An autopsy suggested that Mr. Maybrick had ingested arsenic. While some claimed Mr. Maybrick had been exposed by willfully consuming unregulated patent medicines, the jury found itself caught on a rather sticky detail: Florence Maybrick’s abundant purchases of fly-paper. At the time, fly-paper was made with arsenic. She claimed to have extracted the arsenic for use as a cosmetic. This explanation would not fly today, but beauty products like “Arsenic Complexion Wafers” were widespread in Victorian Britain.

Nonetheless, the jury was unconvinced by Mrs. Maybrick’s account. Only one question remained: How did fly-paper arsenic end up inside Mr. Maybrick? Per the Harvard Law Review, there was “arsenic in the meat-juice” at the Maybrick home, but “Valentine’s meat-juice is not made with arsenic.” The explanation for this mismatch of meaty ingredients? Mrs. Maybrick was suspected of having extracted arsenic from the fly-paper and fed it to her husband in his meat juice. It took the jury only 35 minutes to conclude that Mrs. Maybrick, enamored with another man, had poisoned her husband. She was sentenced to hanging. The sentence was commuted to life imprisonment, and the Maybrick widow ultimately served 15 years.

The final twist? Mr. Maybrick was posthumously accused of being not one, but two, notorious serial killers: the Servant Girl Murderer, who killed eight women in Austin, Texas between 1884 and 1885, and Jack the Ripper, who murdered (at least) five women in London in 1888. Were these Maybrick’s final acts of passion before his own murder? Perhaps. Others think Florence Maybrick was framed by one of her husband’s brothers – the brother, so it’s said, was the real Jack the Ripper. Is it any wonder that, upon her release from prison, Florence returned to America to live out her days with dozens of cats? Perhaps a socially distant Valentine’s isn’t all that bad…

Katie Ana Baca ’11 received her Ph.D. from Harvard in 2019 and is a preceptor in Harvard College’s Writing Program.