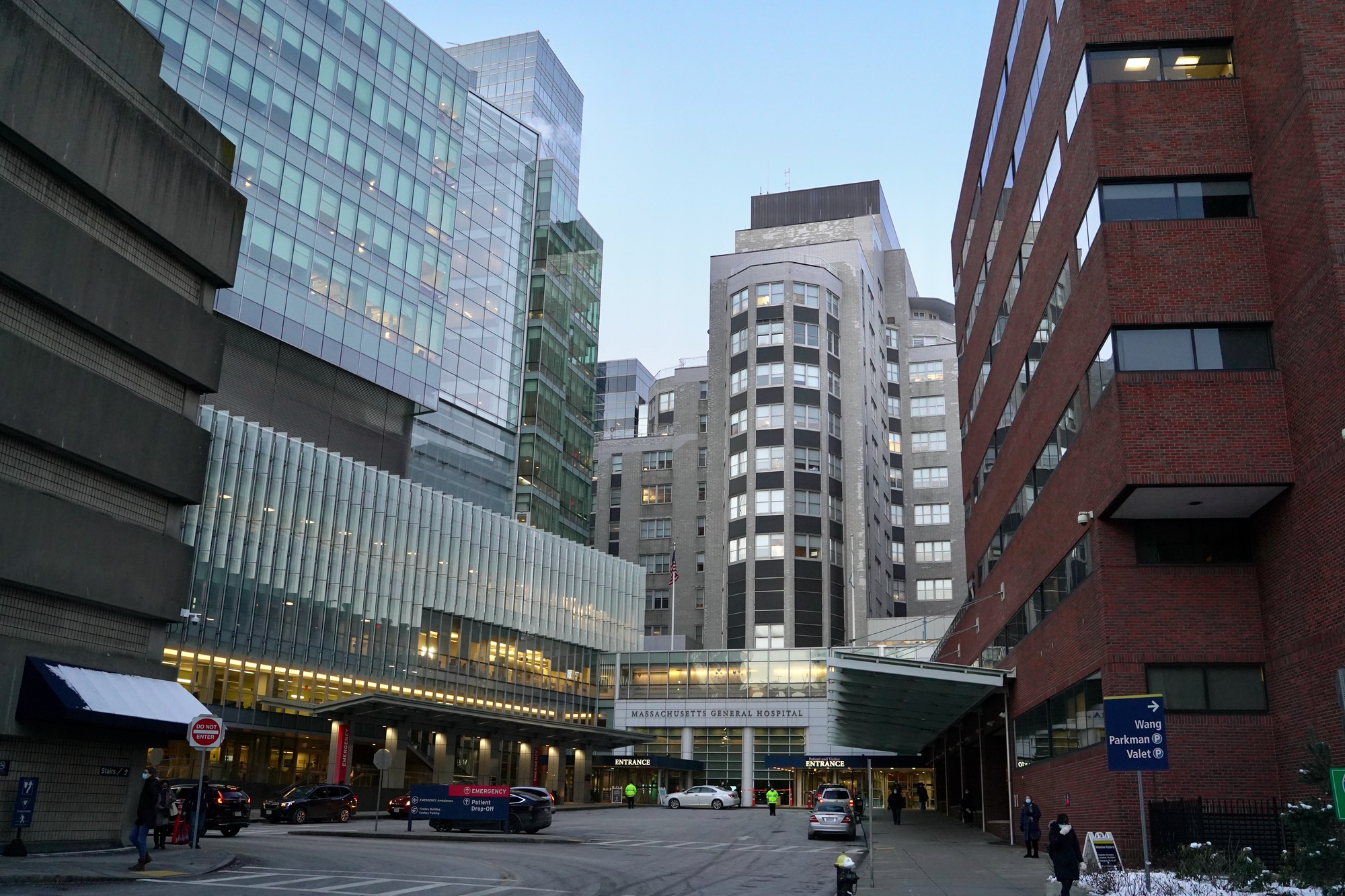 Harvard’s Hospitals Have the Covid-19 Vaccines. Distributing Them Equitably Has Been Complicated.

One year into a raging viral pandemic that has claimed over 525,000 American lives, Harvard’s affiliated hospitals have been equipped with arguably one of the most significant medical accomplishments of the 21st century: the Moderna, Pfizer, and Johnson & Johnson Covid-19 vaccines.

Receiving the vaccine supply is just the first step, however, and Harvard’s hospitals have run into another challenge getting shots into arms: overcoming pervasive inequities that have left individuals of color with less access to and trust in the health care system. Even among the hospitals’ own staff, communication difficulties and mistrust have led to unequal rates of vaccination.

As of Mar. 8, more than 2 million doses of vaccines have been administered in Massachusetts, with more than 715,000 people fully vaccinated. So far, the majority of fully-vaccinated individuals are white, followed by Black, Hispanic, and Asian.

In distributing the coronavirus vaccines to healthcare workers, patients, and the public, Harvard’s hospitals and researchers have looked for new ways to counter those inequities, particularly among members of marginalized communities who may be more hesitant to receive the vaccine.

The solutions they come up with could be key to ending the coronavirus pandemic — in Massachusetts and around the world.

When the first Covid-19 vaccines became available for use in December, Mass General Brigham, an integrated hospital system that includes several Harvard teaching hospitals — including Brigham and Women’s Hospital and Massachusetts General Hospital — rolled out staff vaccination in three phases, in accordance with state recommendations.

Paul D. Biddinger, the Chief of MGB’s Division of Emergency Preparedness who led the organization’s vaccine rollout, said the hospital system prioritized equal access and distribution to the vaccine.

“From the beginning, we certainly committed to the state’s principle — which is everyone working in a similar clinical setting, no matter what their role is, receives equal priority, equal access to the vaccine,” Biddinger said.

Per Biddinger, just under 75 percent of MGB’s more than 81,000 employees had been vaccinated as of Mar. 4.

At Beth Israel Lahey Health, another hospital system that includes Beth Israel Deaconess Medical Center, staff vaccinations likewise occurred in phases depending on contact with patients. As of Mar. 4, 76 percent of the more than 32,000 BILH employees had been vaccinated, according to Jennifer L. Kritz, BILH’s Vice President of Communications.

Fernandez said that these patterns have served as a “wake up call” to focus the hospital’s vaccination efforts on including “diverse narratives” into the dialogue.

Biddinger acknowledged that MGB has not had equal rates of vaccination among employee groups — initially, under 50 percent of Black employees in the hospital system were vaccinated.

The first step MGB took to address inequities was to look at its communication strategies within the hospital system.

Adeline A. Boatin ’04, a Harvard Medical School professor and physician at MGH, volunteered to host informational sessions with staff who may have less access to information about the vaccine. She said she answered questions about how the vaccine was approved, why it was approved so quickly, potential side effects, and eligibility.

“Just knowing that the employees that did come to those sessions — the type of questions that they asked me, the fact that they had a lot of questions — shows that it was helpful for them, whether they ultimately then chose to do it or not,” Boatin said.

MGB also sent out a series of videos to all hospital staff in both English and Spanish about the rapidly-developed vaccine, assuring employees that proper care had been being taken to thoroughly review the vaccine’s effects prior to mass distribution.

Biddinger said MGB reserved 20 percent of vaccine appointments for workers living in high-risk areas or with language or technology barriers that make it challenging to access treatment and information. Many employees who were initially hesitant about getting vaccinated are now less hesitant after seeing their colleagues get vaccinated, he added.

MGB has seen a steady growth in the number of Black and Latinx workers receiving the vaccine, according to Betancourt.

Fernandez similarly noted the importance of showing leaders and peers getting vaccinated.

She said she “felt better” knowing her peers had gone to be vaccinated. Once people she trusted — like her colleague in infectious diseases who had looked through the literature “backwards and forwards” — had gotten the vaccine, she felt more comfortable getting it for herself.

In Patient Rollout, Technology Is A Barrier

With vaccine appointments currently available for all individuals age 65 and older in Massachusetts, hospitals have worked to deliberately allocate doses in the state’s hard-hit communities.

Biddinger — who also chairs Massachusetts’s Covid-19 vaccine advisory group — said the group called for using virus prevalence and the Centers for Disease Control and Prevention social vulnerability index, which measures negative external stresses on human health, to determine which communities have been most impacted by the pandemic.

The first wave included patients at BILH health centers in Dorchester and Chelsea, two communities that have been devastated by the virus. The second wave included patients in 11 towns and neighborhoods heavily impacted by Covid-19. The 11 communities all have high social vulnerability scores, as well as high populations of Black, Latinx, and immigrant residents. The third wave of invitations was sent to the rest of eligible patients.

MGB likewise prioritized sending out invitations for scheduling vaccine appointments to patients in 13 communities that were the hardest hit.

Despite these prioritization systems, the hospitals struggled to reach patients who lack reliable access to technology.

MGB employed multiple methods to reach out to patients to schedule vaccine appointments, including using call centers to place phone calls and sending text messages with a call-back number. 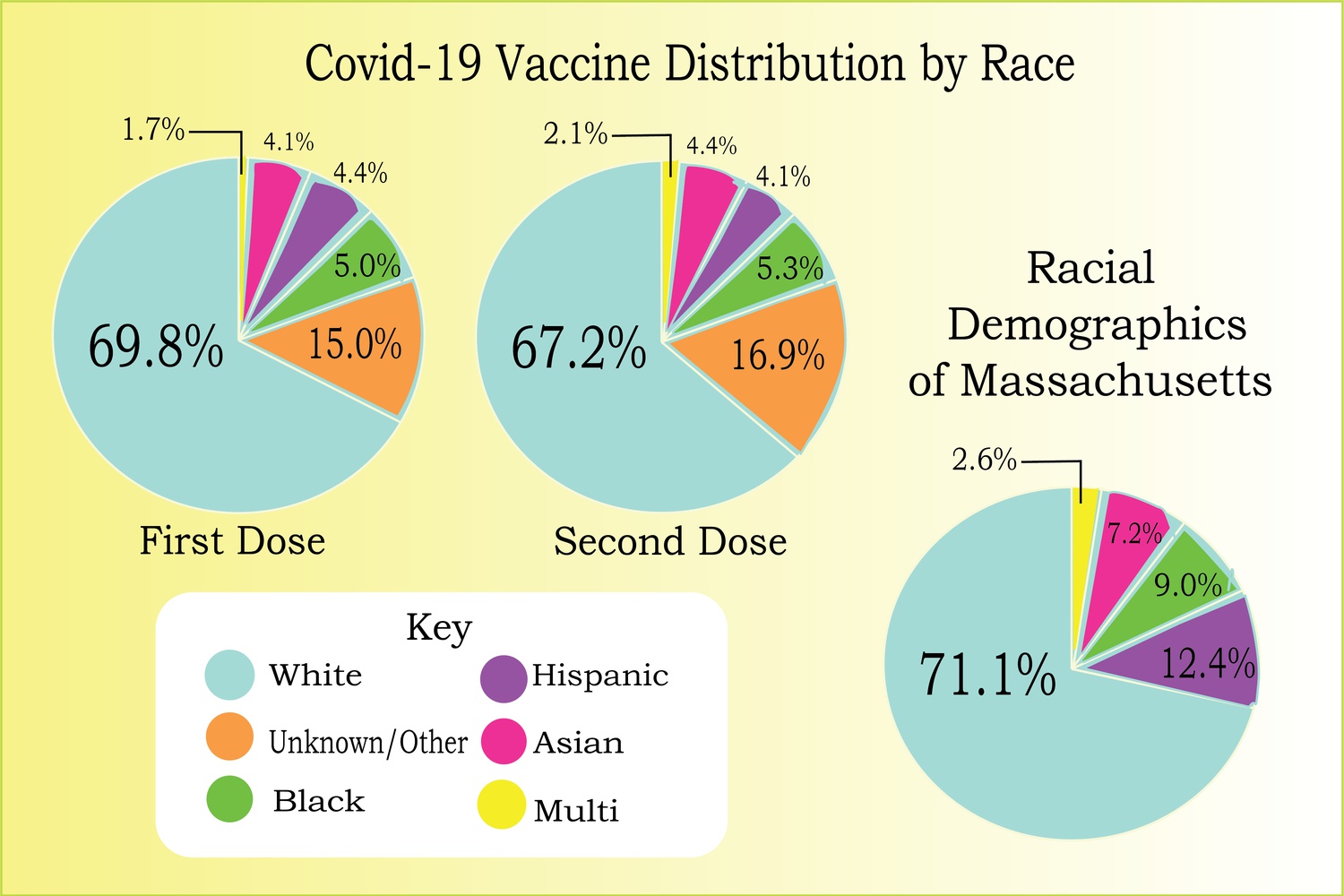 Residents of color in Massachusetts have received the Covid-19 vaccine at disproportionately low rates, according to state data published March 4. By Ashley R. Ferreira

The hospital’s most successful strategy, according to Biddinger, involved using community health centers to deliver calls to eligible patients inviting them to schedule vaccine appointments. Biddinger said that these centers often already have a “good relationship” with patients, contributing to the success of the program.

BILH focused on reaching out through “computer assisted dial messaging to people on landlines,” Shorett said. For patients in highly impacted communities, a BILH healthcare provider or staff member called them directly. The hospital system plans to also deliver postcards to patients who lack any other forms of contact.

Among patients age 75 and over associated with BILH’s healthcare centers in Dorchester and Chelsea, 53 percent of patients who have been successfully reached by one of these methods have booked an appointment at one of BILH’s vaccination sites, according to Shorett.

As the vaccine rollout transitions to the general public, MGB has partnered with multicultural media organizations and the Black Boston Covid-19 Coalition, and has deployed 140 caregivers of color to serve as “vaccine messengers.” These volunteers hold biweekly Facebook Live Q&As and town halls designed to answer questions about the vaccine rollout.

Bisola O. Ojikutu — a Medical School professor and physician at Brigham and Women’s and Massachusetts General Hospital — has been part of efforts at MGB to connect with surrounding neighborhoods. She highlighted the importance of employing vaccine messengers of color as well as understanding social contexts.

“When you have initiatives that are community-centered and that involve people of color, what I see is that there’s more engagement and that people are more willing to be involved,” Ojikutu said.

Researchers at the Harvard School of Public Health have likewise sought to ensure that marginalized communities are prioritized in vaccine distribution.

Natalia Linos, the executive director of Harvard’s FXB Center for Health and Human Rights, said her group observed that BIPOC populations have experienced significantly more deaths from Covid-19 among the younger generation than their white counterparts.

“Among our communities of color, we had much younger people dying,” Linos said. “So if you create an age criteria and you say ‘75 and above,’ then you’re automatically making it available more to white communities.”

Vaccine inequities pervade not only a state level, but also extend to a national and global scale, according to Caroline O. Buckee, a professor of epidemiology at HSPH.

Buckee said wealthier countries have been “hoarding” vaccines for their own populations through bilateral partnerships, while developing countries have been relying heavily on Covid-19 Vaccines Global Access, a global initiative co-led by the WHO aimed at equitable vaccine distribution.

To continue ensuring international vaccine equity, Buckee said that reported Covid-19 data should be stratified by race, ethnicity, and socioeconomic status in order to guide vaccination efforts and “disentangle” the inequitable burden of disease among countries.

A previous version of this article incorrectly stated that 53 percent of patients successfully reached by Beth Israel Lahey Health through computer assisted dial messaging or direct phone calls have booked an appointment at one of BILH’s vaccination sites. In fact, this figure applies only to patients age 75 and over associated with BILH’s healthcare centers in Dorchester and Chelsea.