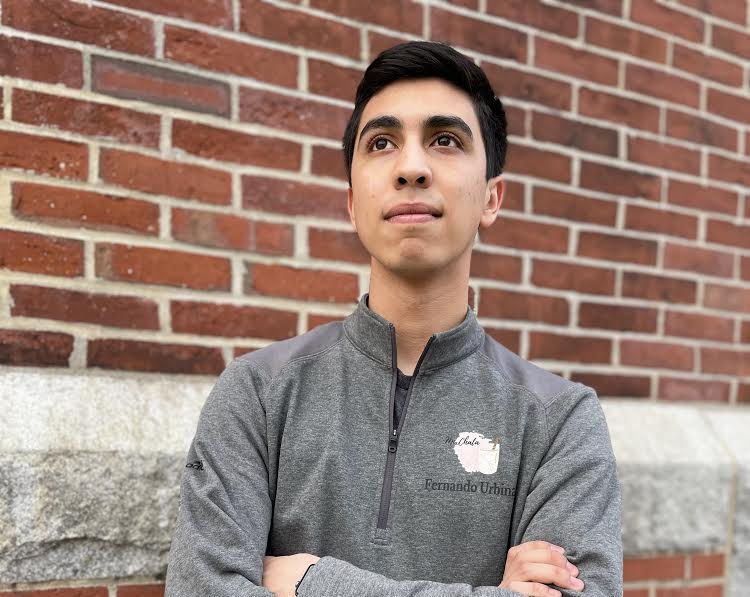 Fernando Urbina '22 is the founder of MixChata, a company that hopes to make horchatas, a traditional Mexican beverage, widely available.
Advertisement
Advertisement

Hoping to share with others the drink he so fondly associates with his childhood and Mexican culture, Fernando Urbina ’22 founded MixChata, a business that bottles and sells horchata.
By Emily Song

Rice, milk, vanilla, and cinnamon. To most people, these four ingredients seem commonplace, but to Fernando Urbina ’22, they symbolize a fusion of his career ambitions and personal identity. Together, they make horchata, a highly popular traditional Mexican beverage. Urbina, who was immersed in Mexican culture throughout his childhood, recalls that horchata was a staple in his household but was nowhere to be found in the grocery store.

“As a child, my mom would make it all the time, and I absolutely loved it,” Urbina says. “But I noticed that there was no horchata being sold in the fridges of stores.”

As a result, Urbina, along with a friend, developed the idea for a business that would bottle horchata and transport it to grocery store shelves, providing the general public with a taste of this sweet and spiced rice milk drink. He underscores the significance of bringing horchata to a mass audience, saying he not only wants it to be “a beverage that people can enjoy, but also an experience for them as well.”

“I want them to be able to experience Mexican culture and to be in touch with what Mexican-American cuisine can be like,” Urbina says. Hoping to share with others the drink he so fondly associates with his childhood and culture, he launched MixChata in January 2021. MixChata’s mission is to make the taste of this traditional Mexican beverage more accessible than ever.

MixChata is still in the early stages of development. “Right now,” Urbina says, “I’m still working on getting more investors, and I’m in the process of having the beverages actually be developed in collaboration with another company.” Unfortunately, doing so has proven difficult during the pandemic, as phone calls and Zoom meetings are not ideal ways to meet with interested stores and investors. “It is a lot more challenging, because you can’t meet with them in person,” Urbina says. “This definitely creates barriers.”

Yet the pandemic has not prevented Urbina from making significant strides in his business. In fact, MixChata recently became a limited liability company, a major step forward for an entrepreneur who only started a couple of months ago.

Urbina’s goal right now is to secure several investors and finish up the beverage development process. After that, he can begin local distribution: “In a few months, the goal will be to reach out to lots of Mexican supermarkets and restaurants in order to try and get our product into these places, so that they can be sold to the general audience,” he says. Eventually, Urbina wants to go national, “slowly introducing MixChata into more and more stores so that more people across the country can have access to the product.”

MixChata has served as fuel for Urbina’s professional ambitions, as becoming an entrepreneur has shifted his attention to the prospect of attending business school. He has already learned a lot since January, acquiring skills such as negotiating with investors, advocating for his product, and collaborating with other companies. For Urbina, the Mexican beverage that he grew up drinking has sparked his passion for entrepreneurship, and he envisions creating MixChata as only the beginning of his business career.

At the root of it all, MixChata is a representation of Urbina’s cultural identity. “I would love to see MixChata in the hands of as many people as possible because of how important my Mexican-American identity is to me,” he says. “I want other people to be able to appreciate that part of me as well.”

Moreover, Urbina has found Harvard to be an empowering environment in which to express this aspect of his identity. Though he was raised in a very traditional Mexican household, his hometown in southwest Michigan was predominantly white. He found “unity within the Latinx community at Harvard,” making his transition and experience “refreshing and really positive.” This community has provided him with an encouraging and open way to learn and forge connections while exploring what it means to be Mexican-American.

“I’ve gotten a lot of support from friends within the community,” he says, “which has motivated me to continue working on this product.” He recognizes that horchata holds a shared value within the Mexican-American community, as both a source of comfort and a symbol of tradition. “I know that it’s not just a beverage,” he says, “but it’s something meaningful to so many people.”

Rice, milk, vanilla, cinnamon. To Urbina, they make a concoction that is both the gateway to his dreams of entrepreneurship and the unique expression of his personal identity.

“It’s a way that I connect to my heritage,” he says. “Hopefully, MixChata will succeed and then continue for years to come.”