Net-Zero Emissions by 2050 Is ‘Too Slow,’ Three-Fourths of Surveyed Harvard Faculty Say

A significant majority of respondents to The Crimson’s annual survey of Harvard’s Faculty of Arts and Sciences — 73 percent — believe the Harvard Corporation’s commitment to achieve net-zero greenhouse gas emissions from its endowment by 2050 is “too slow.”
By Meera S. Nair and Andy Z. Wang 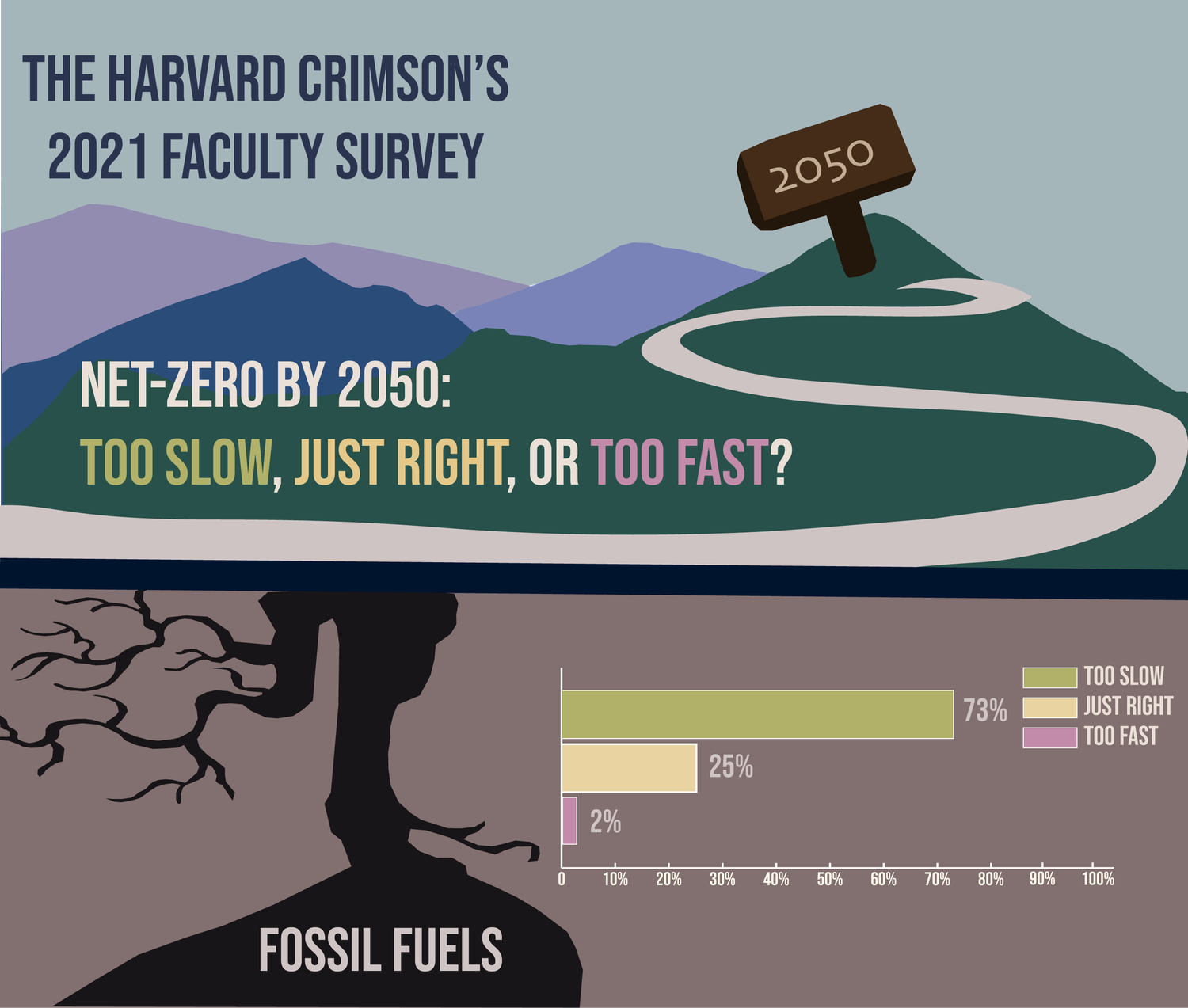 A significant majority of respondents to The Crimson’s annual survey of Harvard’s Faculty of Arts and Sciences — 73 percent — believe the Harvard Corporation’s commitment to achieve net-zero greenhouse gas emissions from its endowment by 2050 is “too slow.”

The survey also revealed that a majority of respondents do not believe the University is doing enough to fight climate change. Faculty responses demonstrated strong support for divestment both from the fossil fuel industry and from companies tied to private prisons.

The Crimson distributed its faculty survey to more than 1,100 members of the FAS in late February, polling Harvard’s flagship faculty on key University policy decisions, challenges they face as academics, and pressing issues on campus — including the repercussions of the Covid-19 pandemic. Tenured, tenure-track, and non-tenure-track faculty all received the survey.

The 94-question survey obtained more than 300 responses, though not all respondents answered each question. The anonymous survey, a link to which was emailed to nearly every member of the FAS, was open from Feb. 26 to Mar. 5. The Crimson did not adjust the data for possible selection bias.

While the first installment of The Crimson’s 2021 faculty survey series explored faculty views on the University’s tenure procedures, the second installment examines how faculty view Harvard’s response to divestment movements on campus.

In recent years, divestment from fossil fuels has become a point of contention between the FAS and the University. In February 2020, the FAS voted 179-20 in favor of a motion urging the Corporation — the University’s highest governing board — to divest. The vote, representing the culmination of a four-month-long debate, marked a dramatic rebuke of administrators’ longstanding refusal to support divestment.

Last Monday, organizers with Fossil Fuel Divest Harvard, a student group calling on the University to divest from fossil fuels, filed a complaint with Massachusetts Attorney General Maura T. Healey ’92. In the complaint, the students alleged that the Corporation’s investments in the fossil fuel industry violate state laws governing the investments of non-profit organizations.

More than 115 Harvard faculty members signed on to a public letter backing the complaint.

The faculty surveyed overwhelmingly supported the same goals as the student organizers: 75 percent of respondents said they agree that Harvard should divest from the fossil fuel industry, with 40 percent responding that they “strongly agree.”

The Harvard Management Corporation has decreased its exposure to fossil fuels — including both direct and indirect investments — by 80 percent since 2008, according to a company report published last month.

Additionally, the report found that HMC had no direct exposure to companies that “explore for or develop further reserves of fossil fields” as of June 2020.

Of survey respondents, 38 percent revealed that they were dissatisfied with University President Lawrence S. Bacow and the Corporation’s response to divestment movements on campus, including 17 percent who indicated “extreme” dissatisfaction. Another 25 percent of respondents shared that they were satisfied with Bacow and the Corporation’s response, although only 4 percent expressed “extreme” satisfaction.

Virginie Greene, a professor in the Department of Romance Languages and Literatures, said in an interview that the University’s reluctance to divest from fossil fields is an issue of “governance and transparency.”

“Harvard has a governance structure that’s not very democratic on certain aspects, and particularly the financial arrangement — the way that the university invests — Harvard faculty are not consulted on that,” Greene said. “We have no power except for organizing and petitioning.”

“We are never consulted by the Corporation on this issue,” she added.

Though some faculty members have indicated that they supported the Corporation’s commitment, the survey revealed that 73 percent of respondents currently believe the University’s pace towards net-zero emissions from its endowment is too slow.

University spokesperson Jason A. Newton wrote in an emailed statement that the Corporation’s commitment to achieve a carbon-free footprint by 2050 reflects the timeline provided by the 2017 Paris Agreement.

“The net-zero commitment provides an opportunity to scrutinize Harvard’s entire endowment portfolio with respect to greenhouse gas emissions in the broadest sense, not just exposure to fossil fuels,” Newton wrote. “The net-zero commitment also extends that scrutiny to asset managers and companies that are failing to also account for and reduce greenhouse gas emissions.”

“In taking on this leadership role – the first U.S. endowment to make this commitment and clearly state its expectations to asset managers and companies – Harvard is leveraging its voice to urge others to join us in creating an economy that is fully net-zero by 2050 (the timeline reflected in the Paris Agreement),” Newton added.

During a faculty meeting earlier this month, Music professor Alexander Rehding asked Bacow about the implementation of the Corporation’s 2050 commitment, stating that the commitment currently lacks “benchmarks or interim milestones on the way to our goal of net-zero 2050.”

“There is no shortage of existing benchmarks,” Rehding said. “If you look at the UN report from 2018, it uses 2030 as this interim benchmark, and that is only nine years from now, and that is when 50 percent of the goals should be reached.”

“The clock is ticking,” Rehding added. “Of course Harvard doesn’t have to follow the UN recommendations, and I hope we can propose something that is far more ambitious. But benchmarks are crucial to lay out the path to success.”

For its 2021 Faculty Survey, The Crimson collected electronic responses through Qualtrics, an online survey platform, from Feb. 26 to Mar. 5, 2021. A link to the anonymous survey was sent to 1,182 FAS and SEAS faculty members through emails sourced in February 2021 from Harvard directory information. The pool included individuals on Harvard’s Connections database with FAS affiliations, including tenured, tenure-track, and non-tenure-track faculty.

This is the second installment in a six-part series analyzing the results of The Crimson’s survey of the Faculty of Arts and Sciences, Harvard’s flagship faculty. Read the first installment here.