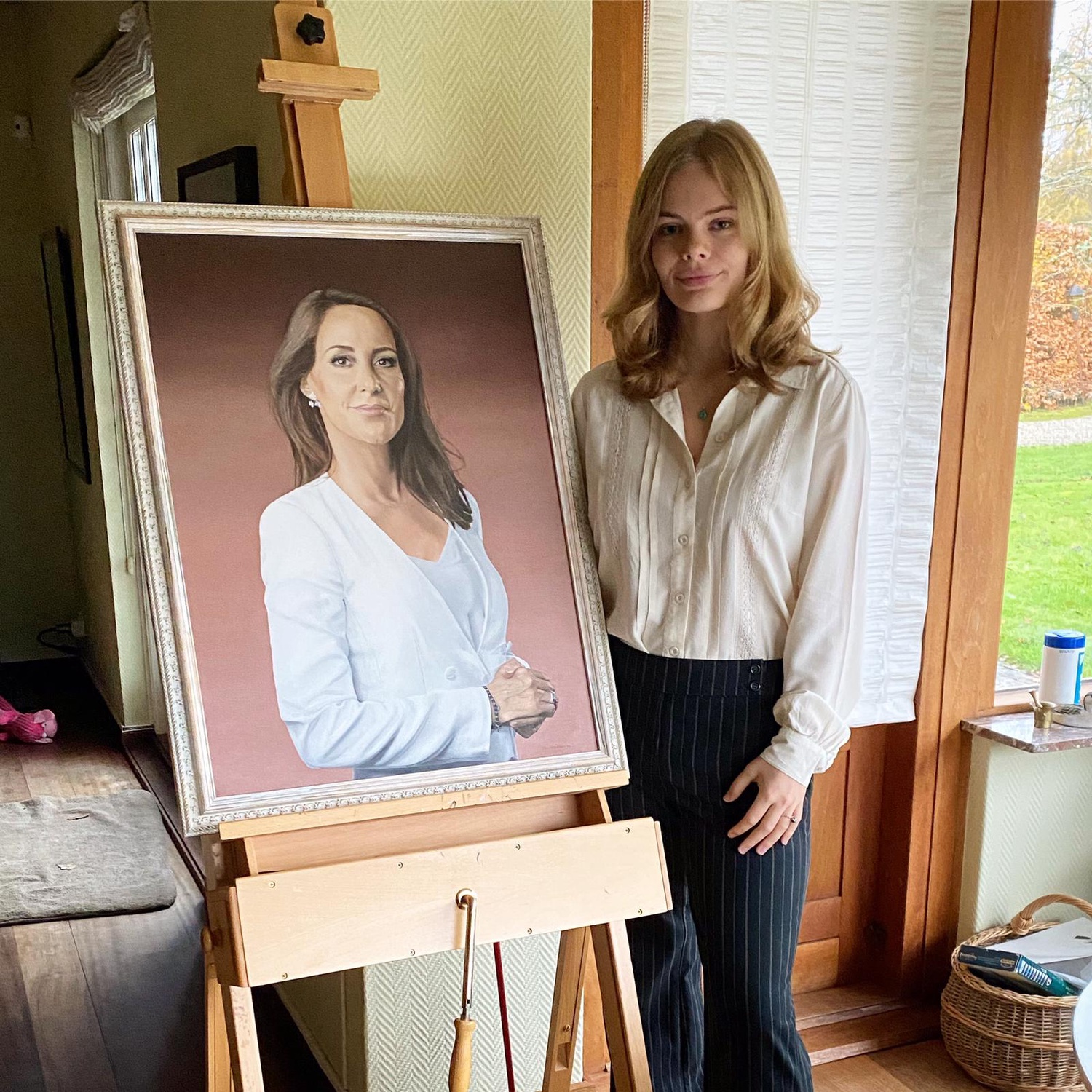 When Jensen began to draw, she was an amateur. Her first foray into the art world was a “completely unrecognizable” drawing of Beyoncé. From there, Jensen “just started drawing more and more.” As she worked to get better, she sought recognition from the subjects of her painting, often traveling from her home in Denmark to London to meet actors during their movie premieres.
By Gabrielle J. Pesantez and Kendall I. Shields

That all changed when she turned 12. She downloaded Twitter and saw celebrities responding to portraits of themselves created by their fans; Jensen wanted in. Flash forward almost a decade and Jensen, an incoming member of Harvard’s class of 2025, is a self-trained royal portraitist, having painted a portrait commissioned by Her Royal Highness Princess Marie of Denmark. In addition, she, autistic herself, is an increasingly high-profile advocate for the visibility, understanding, acceptance, and support of autistic people — the term Jensen prefers to use — around the world.

When Jensen began to draw, she was an amateur. Her first foray into the art world was a “completely unrecognizable” drawing of Beyoncé. From there, Jensen “just started drawing more and more.” As she worked to get better, she sought recognition from the subjects of her painting, often traveling from her home in Denmark to London to meet actors during their movie premieres.

“I would stand there all day, trying to get a good spot,” Jensen recalls. “I succeeded every single time. I always got a signature on the drawing.”

Ultimately, Jensen’s passion for grabbing the attention of celebrities would result in her own discovery at the age of 14 by world-renowned art collector Beth R. DeWoody.

“I went to the ‘Batman vs. Superman’ movie premiere in London and I was drawing Henry Cavill,” Jensen recalls. “[DeWoody] approached me and said that she was really interested in my art and that she might be interested in doing some commission work. I was over the moon.” 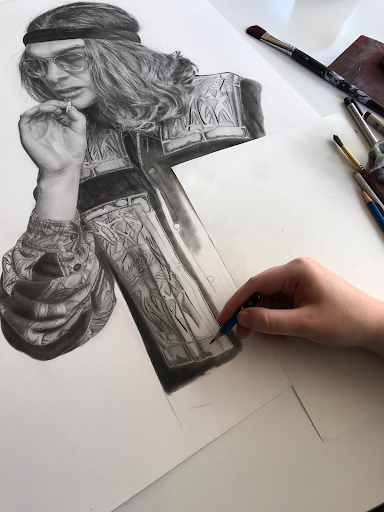 By Courtesy of Nina Skov Jensen

She believes many might find it strange that she specializes in portraits, given that she is autistic. “People have this idea,” she says, “that autistic people aren’t very social or good with faces. I love capturing people.”

Jensen says she feels fortunate to have been born into a supportive family filled with other autistic people. Her brother was the first to be diagnosed. Soon after, she and her mother received their own diagnoses.

“Autistic women and girls are often misdiagnosed, diagnosed late in life, or not diagnosed at all,” says Jensen. Autism in girls is often “just different than in boys,” for whom autistic traits present in a way that is “often more noticeable in terms of how autism is described and how the diagnosis is given.”

Without a mother who understands her completely, “it would have been much harder,” Jensen says. “She’s encouraged me to do what’s best for me, not just what society perceives as ‘the best.’” 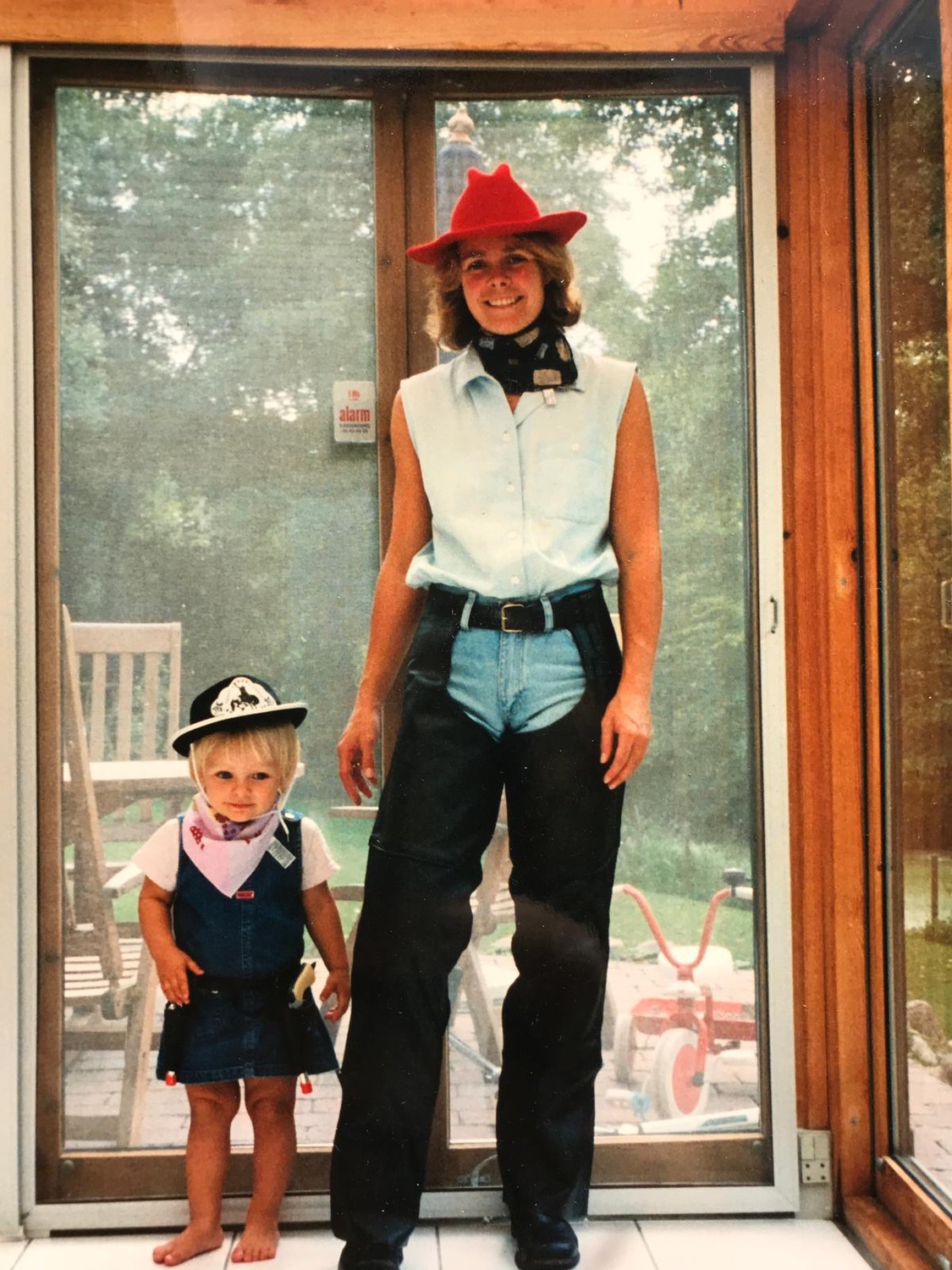 By Courtesy of Nina Skov Jensen

Indeed, Jensen’s parents showed full support for her career in the arts. She had previously only ever worked in pencil, but Jensen’s father pushed her to try oil painting after hearing about an opportunity to paint a portrait for the Danish National Police. Jensen was hesitant at first, but ultimately went for it. She was up against professionals for the job, but her talent spoke for itself.

“I’m so happy that I got the chance to do it,” she says. The portrait series that she added to dates back to the 17th century, making her selection that much more historic. “It’s such an honor, because I’m probably also one of the only female artists in that whole collection.”

Jensen next set her sights on the chance to paint Her Royal Highness Princess Marie of Denmark, patron of the Danish Association for Autism. Jensen reached out to a contact at the organization, asking if it might be possible for her to paint the princess. A few months later, she received an answer from the palace: yes. “Most little girls want to be a princess at some point in their lives, so it was a very fairytale kind of experience,” Jensen reflects.

“The difficult part is having to top that,” she laughs.

Jensen intends on taking courses in the fine arts when she arrives at Harvard, finally gaining the technical skills she has never had the chance to receive. She also hopes to found a new student organization aimed at advocating for and enhancing the opportunities available to autistic students. She hopes that amplifying autstic perspectives will influence the world’s future leaders studying at Harvard. Jensen, along with the future organization’s co-founder, autism ally Rosanna K. Kataja ’24, will advocate for the University to expand their admissions outreach to autistic students. Further, they are working to designate internship opportunities at major companies for autistic students and professionals.

Jensen and Kataja were first inspired to start this organization after they launched a popular petition against tThe Golden Globes nominations of Australian singer and director Sia’s newest film: “Music.” The film has been subject to immense criticism due to Sia’s casting of a non-autistic actress, Maddie N. Ziegler, in the role of an autistic young woman. Many have called Ziegler’s portrayal of an autistic character a caricature of autistic body language and have further criticized the film’s portrayal of restraint techniques.

“It’s more than just a movie,” says Jensen. “It represents the problem we have in our society. It was really the breaking point for me, realizing that I just can’t tolerate this anymore.”

The Change.org petition, addressed to The Golden Globes, Sia, Ziegler, starring actress Kate G. Hudson and actor Leslie Odom Jr., production companies HanWay Films and Vertical Entertainment, and the Hollywood Foreign Press Association, has since received over 150,000 signatures. Jensen and Kataja’s efforts have been recognized by several U.S. and international publications, including the Los Angeles Times, The Independent, and Newsweek. Jensen says that neither Sia’s team nor The Golden Globes have issued statements acknowledging the petition, though she speculates that they are aware of it given its popularity.

“They don’t have any personal stake in any of this,” says Jensen. “They don’t experience [autism] and they don’t care.”

In spite of the lack of a publicly-issued response from Sia’s team or The Golden Globes, Jensen was touched to see the outpour of support that the petition received.

Jensen says that many who might normally say, “‘It’s just acting,’” or call her criticism “‘sensitive’” began to back the petition. “It was just amazing to see.”

Jensen believes there may be more misconceptions about autism in the U.S. than in Denmark — for example, the mistaken belief that non-speaking autistic people are unintelligent.

“You don’t really hear about the full spectrum in the U.S.,” she says. When a lot of people think of autism, explains Jensen, “It’s that white, straight, young adult, virgin man — socially awkward — who has this crazy ability.” Jensen says this lack of diversity in media representations of autism is “unfortunate,” as autistic women like herself are rarely portrayed.

In 2016, an award-winning documentary series, “Extraordinary People,” featured Jensen and spotlighted her journey and accomplishments as a young autistic artist.

“People are realizing that autistic people are very capable,” says Jensen. “I got photos of drawings from parents by their [autistic] kids who had seen me in this documentary series and started drawing, because they wanted to do art like I did.”

Jensen’s greatest wish is for austistic people to be recognized for their individuality: “I think the most important message is to have people forget all these stereotypes — be aware of them, because some of them, like being sensitive to sound, are generally true. But don’t rely on them. Just do the same thing you would with any other person. Figure out who they are as individuals.”