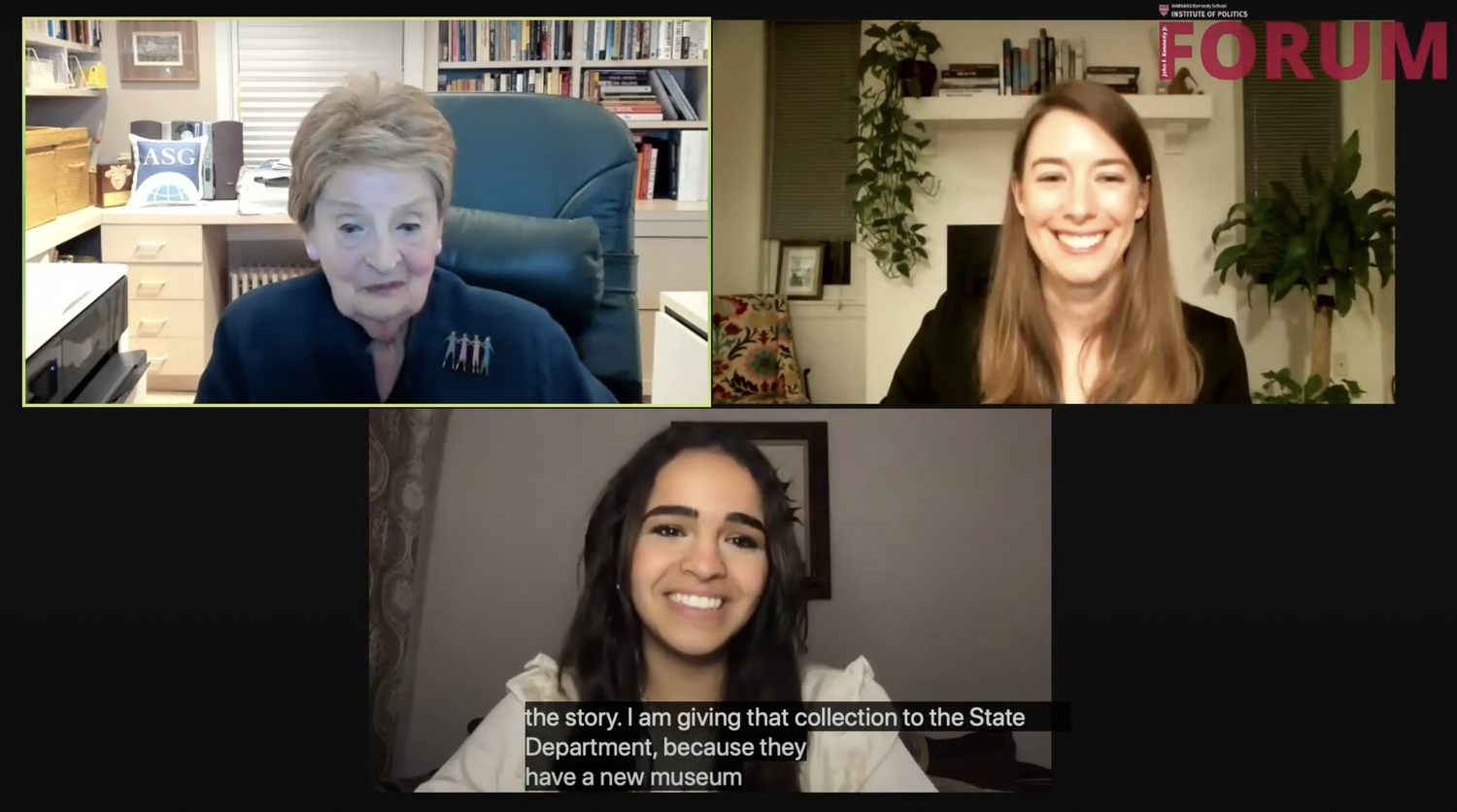 Former Secretary of State Madeleine Albright drew the largest crowd in Institute of Politics forum history for her discussion on the future of female public leadership Monday evening.
By Nina I. Paneque and Rowena N. Wilson-Olivo, Contributing Writers

Former Secretary of State Madeleine Albright discussed the future of female public leadership in a Monday Institute of Politics webinar, drawing the largest crowd in IOP forum history with more than 2,000 spectators in attendance.

Albright opened the discussion by recounting her experiences as the “only woman in the room” while serving on the U.N. Security Council and as Secretary of State.

“One of the things that I had often talked about to my students was that as the only woman in the room, you had to decide that you were going to speak no matter what, and not wait around to figure out whether they liked you or not,” Albright said.

In making herself heard, however, Albright said she faced more resistance from American men that she knew personally than those from abroad, particularly when concerns were raised over her qualifications as nominee for Secretary of State.

“I actually had more problems with the men in our own government. And that is a very hard thing to say,” Albright said. “And I'm trying to explain it to myself in the following way, which is that they had known me for a very long time — I was a friend of their wives, and I was a carpool mother, then I was a staffer, and I made a lot of coffee and Xerox. And they thought, ‘How did she get to be Secretary of State when I should be Secretary of State?’”

While serving as Secretary of State, Albright said she learned the importance of practicing “soundbite diplomacy” to make diplomatic language more accessible to the general public.

“I think the thing that really did happen was that I felt that kind of long academic discourse didn’t explain well enough to the public what was going on,” Albright said. “I have learned to be able to be succinct and to try to come up with some kind of an image is important.”

When asked about the ornate pins that line her suit jackets, Albright said they are meant to make “foreign policy less foreign, frankly.”

Albright said these pins have become a quintessential aspect of her wardrobe, reflecting her assessment of her daily agenda items — pins of “flowers and butterflies and balloons” represent good days, while “carnivorous animals and spiders and things” signify bad days.

To conclude the discussion, Albright imparted her mantra for women to the event’s attendees.

“I really do think a mantra for a woman is to interrupt, because if you raise your hand, by the time they call on you, the point is not germane,” she said. “That’s my message to all of you. You’re getting a great education, and you are going to be incredibly well prepared to do whatever you want to if you interrupt.”