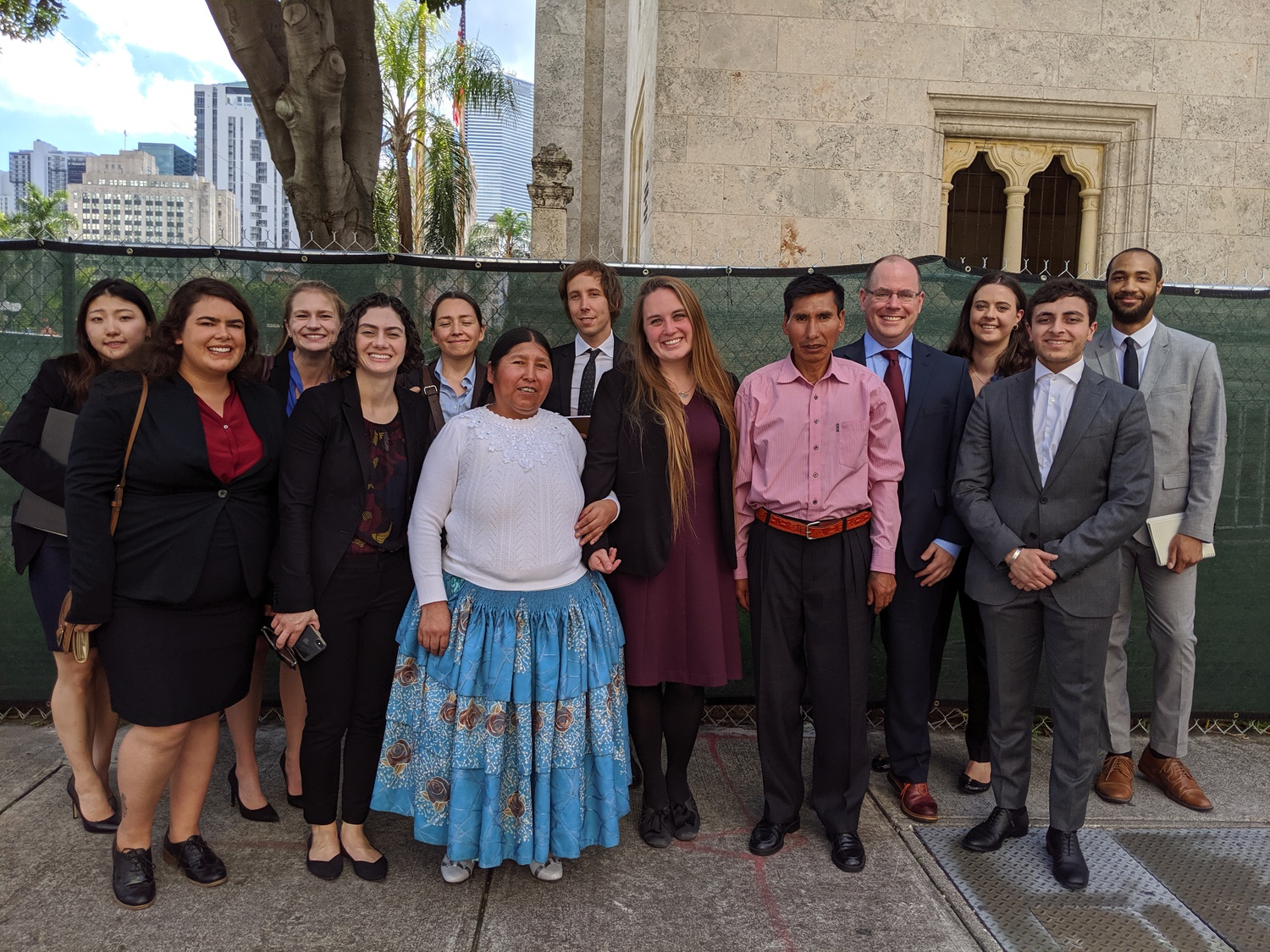 HLS students and instructors from the International Human Rights Clinic, alongside two of the plaintiffs in the case, gather outside the 11th Circuit Court of Appeals following oral argument in November 2019. The Mamanis, whose daughter Marlene was killed in the massacre, traveled to Florida for the hearing. By Courtesy of Thomas Becker
By Emmy M. Cho, Crimson Staff Writer

Then HLS second-year student Thomas B. Becker brought the case to the clinic in 2006, and lawyers there, alongside other nonprofits and private law firms, filed the original suit on behalf of 10 members of Bolivia’s Indigenous population the following year. In a landmark decision in 2018, an American jury found the two Bolivian officials responsible for the extrajudicial killings. District Judge James I. Cohn reaffirmed that decision on April 5.

Before attending law school, Becker — who is now an attorney for the University Network for Human Rights — spent time in Bolivia and investigated the history of “Black October,” a military massacre that left more than 50 dead and more than 400 injured amid protests over gas exports.

During his first year at the Law School, in a human rights course, Becker learned about the Alien Tort Statute, a centuries-old provision in U.S. federal law that had largely been forgotten. The statute would become an instrumental force in Becker and the Law School’s legal case against the former Bolivian officials, who currently reside in the U.S. after fleeing their home country.

“We really just briefly learned about it in passing in class, but it stuck with me,” Becker said. “When I returned to Bolivia after my 1L year — I went down to work with the families — we explored the idea of, ‘Maybe let’s try to bring a case in the U.S.’”

In the summer of 2006, he called Jim L. Cavallaro ’84, then the director of the International Human Rights Clinic, and Tyler Giannini, the clinic’s current co-director, about the possibility of bringing forth a case.

“We spent the next year or so taking many trips back and forth to Bolivia, doing interviews, gathering documentation, and building a case,” Becker said. “When it became very clear that there was far more than enough evidence showing the responsibility of these people, we filed a lawsuit in 2007.” 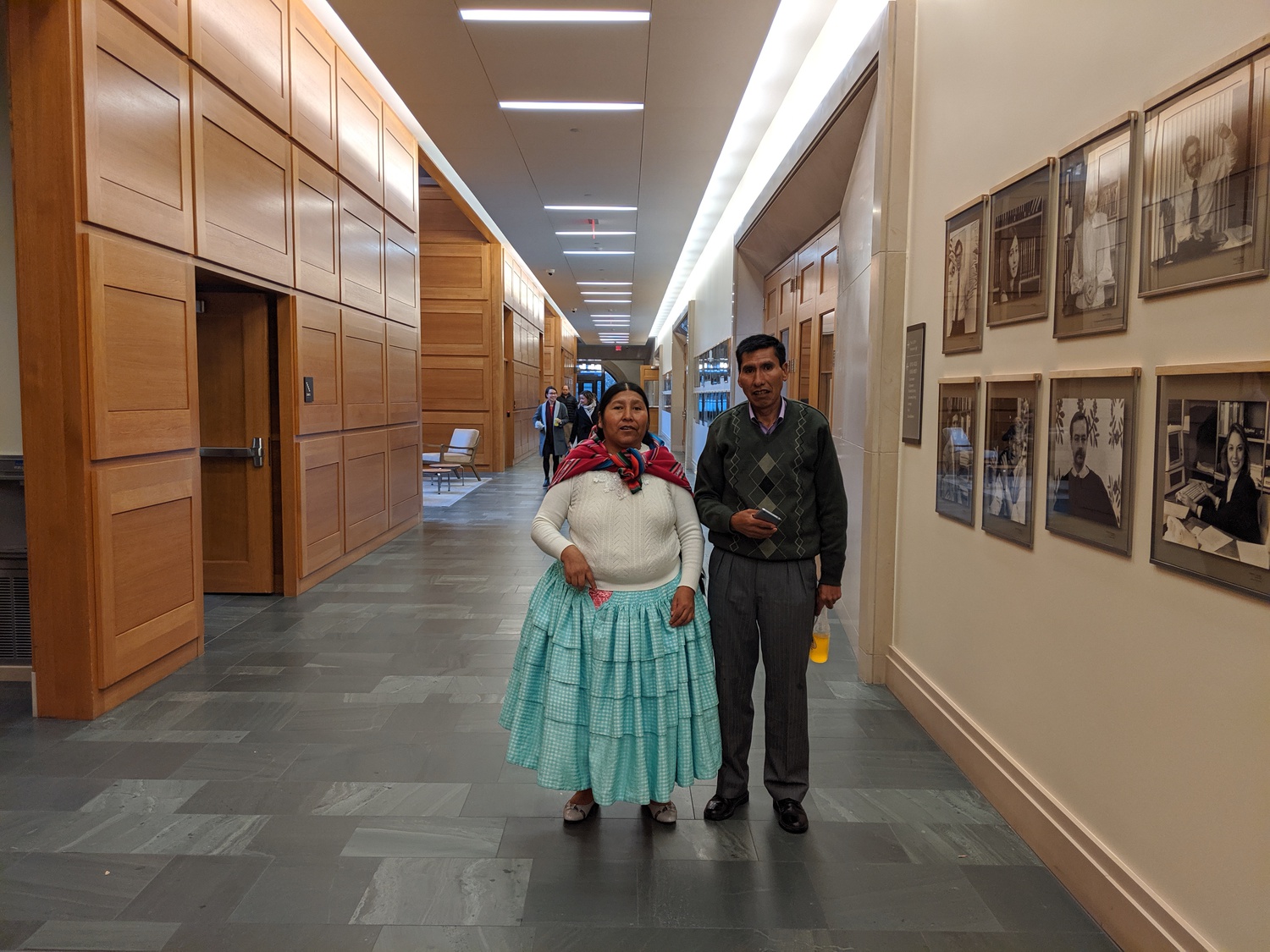 Eloy Rojas Mamani and Etelvina Ramos Mamani visit Harvard Law School to talk with students about their lawsuit. Soldiers shot and killed their 8-year-old daughter Marlene in 2003. By Courtesy of Thomas Becker

Giannini said he still remembers the details of the call and Becker’s ability to “capture and bridge” the plight of the Indigenous communities to the attorneys leading the clinic.

“These cases are long-term cases, they always are,” Giannini said. “But he really saw the second side of the angle, which was not just that you had the communities who wanted justice, but he also saw the injustice of having the two defendants living in the United States.”

International Human Rights Clinic co-director Susan H. Farbstein said much of the case was “driven and led by the plaintiffs.”

“Their tireless commitment and their optimism are sort of what have allowed us to get to this point,” Farbstein said. “It just wouldn’t be possible without them, without their vision, without their energy — that’s one really important part of the story for me, is how they’ve just never given up.”

Becker said he heard the news from a colleague at the Center for Constitutional Rights — another organization that was involved in the case — while on a jog as part of his training to climb Mount Denali in a few weeks.

“That certainly interrupted my climb for the day,” Becker said. “I ran home, glanced at the decision of the judge, and then called the families, in part because certainly it was exciting for me, but I can’t imagine what they were feeling.”

The plaintiffs in the case, Becker said, are members of Bolivia’s Indigenous population from “humble backgrounds” who have faced continuous racism from the rest of their country. The case is named for two of the plaintiffs, Etelvina Ramos Mamani and Eloy Rojas Mamani, whose 8-year-old daughter was killed during the massacre.

For these individuals to have held the former Bolivian president accountable, Becker said, is a historic win for human rights law everywhere.

“When we started this case, honestly everybody said, ‘You guys are crazy, you cannot touch Goni,’” Becker said, using a common nickname for Sánchez de Lozada. “The families basically said, ‘We don’t care. No one should be able to do what this man did, and we will follow him to the United States.’” 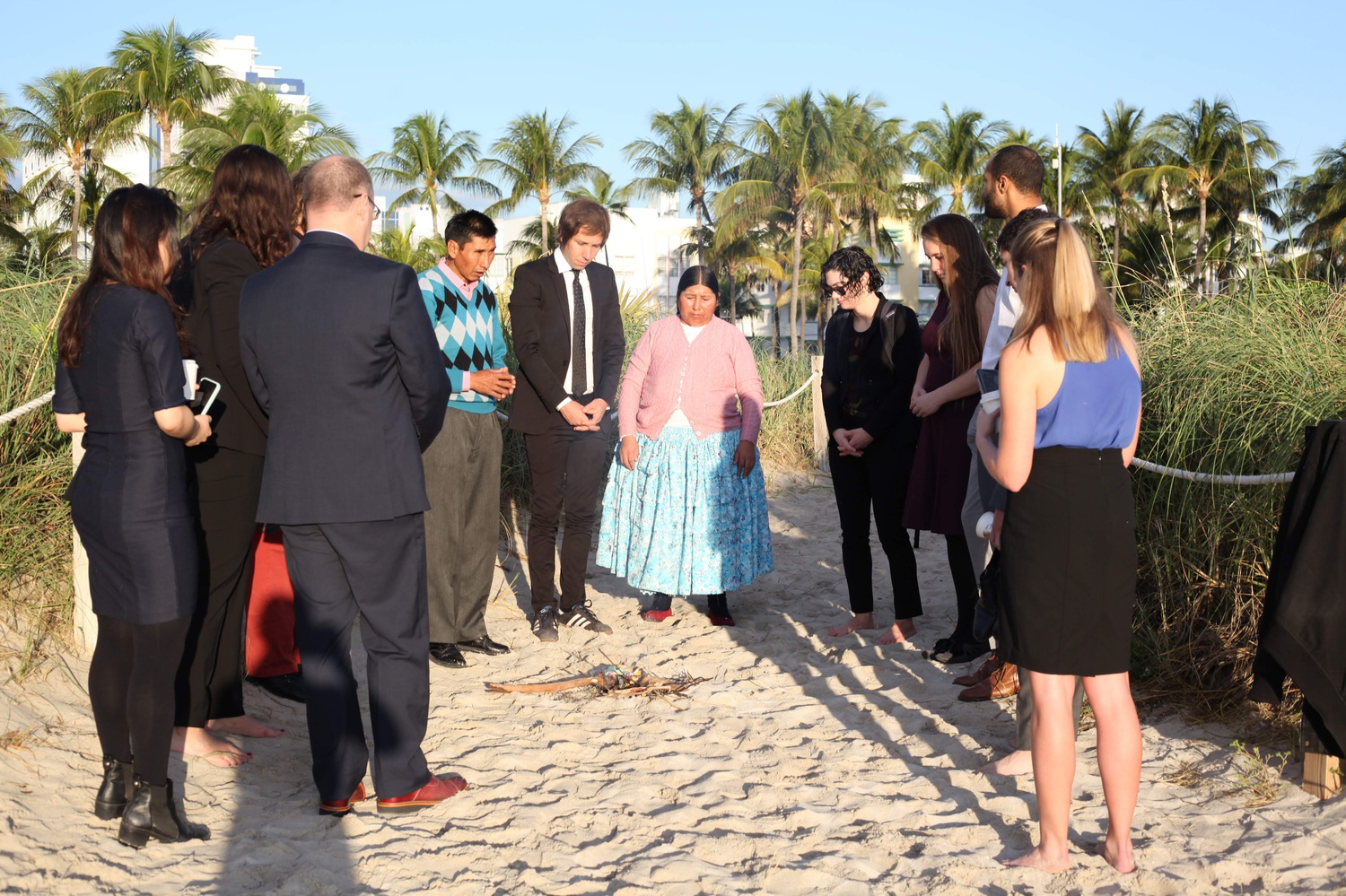 Members of the Harvard team join the Mamanis in an offering to Pachamama, the Andean earth goddess, shortly before oral argument at the 11th Circuit Court of Appeals. By Courtesy of Thomas Becker

Sondra R. P. Anton, a second-year law student and incoming Co-President of HLS Advocates for Human Rights, said that the case's outcome is a testament to the “bravery and the resilience” of the survivors and plaintiffs as well as the character of the clinic’s leaders.

“These are people who embody what it means to be an impactful human rights lawyer — humility, compassion, dedication to survivors, this willingness to embrace the thought that if something sounds crazy, then it’s probably worth pursuing,” Anton said.

Giannini said he believes one of the most important takeaways from the case is that justice is not limited to a particular geographic region.

“The killings and the violence happened in Bolivia, but we had a U.S. jury. They really got it, they understood,” Giannini said. “In a human rights arena, we sometimes get questions of, ‘Does justice travel?’ This shows that it does.”