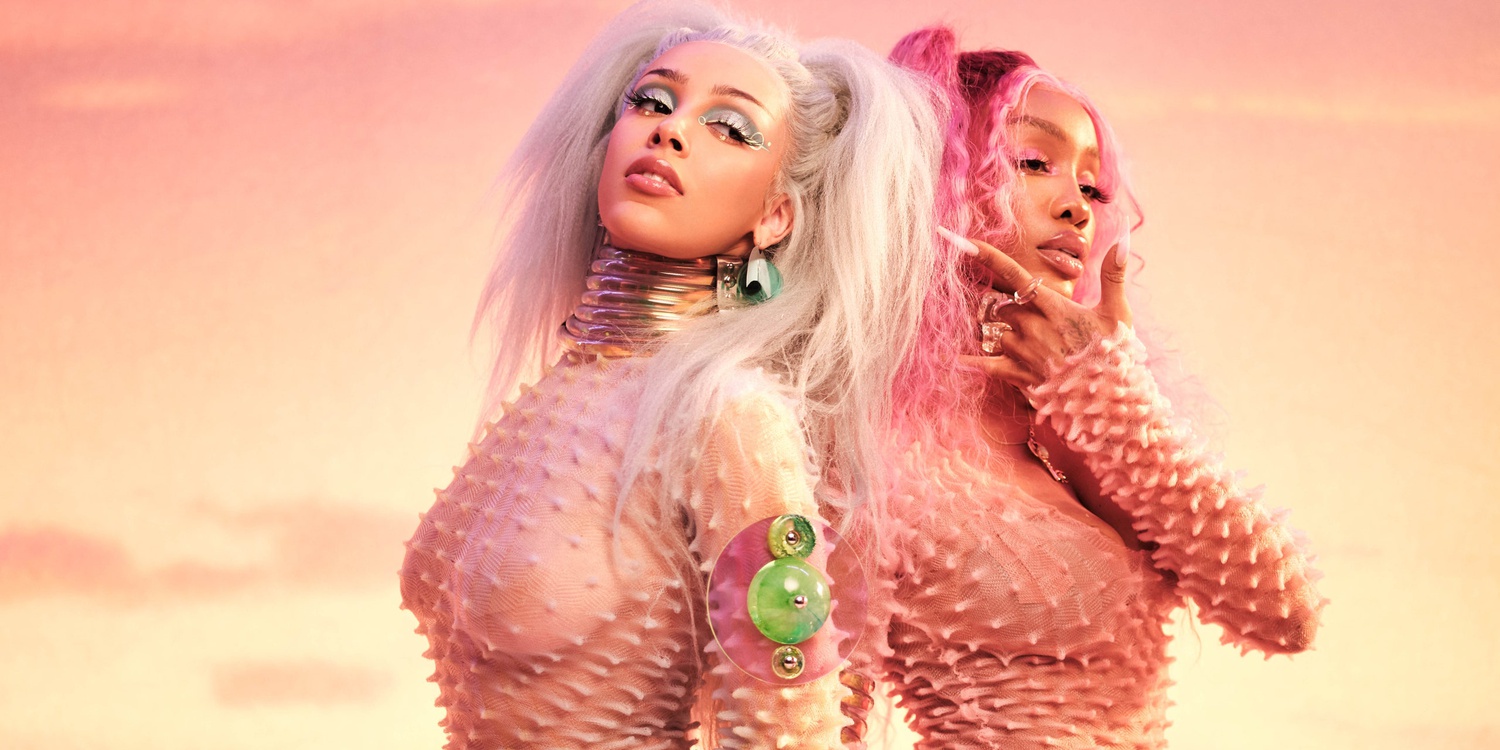 Doja Cat and SZA play the rulers of "Planet Her" in the new music video for "Kiss Me More." By Courtesy of Doja Cat/VEVO
By Hannah Hope Tsai Kim, Contributing Writer

Pop, hip-hop, and R&B artist Doja Cat released a music video to her newest single “Kiss Me More ft. SZA,” and the internet ate it up. According to Pitchfork, this is the first single released in what is set to be Doja Cat’s third studio album, “Planet Her,” coming this summer.

Following last month’s music video release of Doja Cat’s “Streets” as a response to the viral red light silhouette trend on TikTok, Doja Cat and SZA deliver yet another one of this season’s hottest videos. Shot under eternal sunset skies with broad strokes of peach pink, this music video is a unique depiction of lust and desire in its most playful form. Doja Cat does it all — from complex costuming, hair and makeup, to stunning CGI visuals.

The video follows an astronaut, played by actor Alex Landi — best known for his role as Dr. Nico Kim in the hit TV show “Grey’s Anatomy” — after he crash lands on “Planet Her.” If the video is an innuendo to a sexual encounter between a man and a woman, it makes sense that Landi takes on the role of a recently crashed astronaut to a largely uncharted planet: Sexual partners are visitors to women’s bodies, and should be treated according to the rules of the planet.

Shots of singing and dancing Doja Cat and SZA, who are the rulers of said planet, are interspersed throughout. Together, the fluidity of their bodies to a seemingly improvised dance draped in pink mesh on a bed of pink silk sheets is mesmerizing.

After losing connection with Earth, the astronaut rows through one of Planet Her’s rivers, encountering islands upon which other-worldly versions of Doja Cat and SZA sit, creating the silhouette of mountain ranges. The astronaut comes across a large island in which a vibrant pink-painted Doja Cat sits, luring him in. After trying to convince himself he’s only just seeing things, the astronaut encounters a second island with larger-than-life figures of Doja Cat and SZA, clad in textured mesh suits. He stops to marvel at the ethereal beings, while Doja Cat delivers the perfect melodic rap verse in an orange jumpsuit and headwrap.

Not long after, SZA sits on an island of cherry blossom trees dressed in a two-piece bikini made of flowers. The Neo-Soul and R&B artist serenades viewers with not only the bridge of the song, but with her ethereality, too.

The astronaut makes it to a portal shaped like lips and enters by eating fruit off a nearby tree, likely an elude to a sort of “love potion.” He wakes up in bed with Doja Cat and SZA, with the video featuring a montage of the trio’s escapade. The astronaut then glitches into oblivion after falling for Doja Cat and SZA’s seduction. These cunning rulers have conquered yet another earthly being who endeavored to explore Planet Her’s shore uninvited.

The final part of the music video shows the pair casually playing a video game that resembles the exact narrative of the astronaut’s journey. Through clever dialogue and the pair’s hilarious delivery, it is conveyed that Doja Cat and SZA, the rulers of Planet Her, collect the bodies of men from Earth, similar to the astronaut, who are only pawns in their video game.

There is something to be said about the role reversal that Doja Cat plays with in this video, asserting that women can get exactly what they need from a male sexual partner and leave him as that if she so chooses. This iconic video for “Kiss Me More” treats sex with a sort of levity, that sex is to be enjoyed by women, and that it is the female body that should be kept sacred. Women are thus granted a sort of agency, or a permission of agency, to take the reigns of their sexual relationships with men.