With limited or no access to all of laboratory equipment at the School of Engineering and Applied Sciences, many seniors had to adapt to researching and writing their theses remotely. Some relied more on computer-aided research, while others found inventive ways to still utilize in-person experimentation.
By Natalie L. Kahn and Simon J. Levien 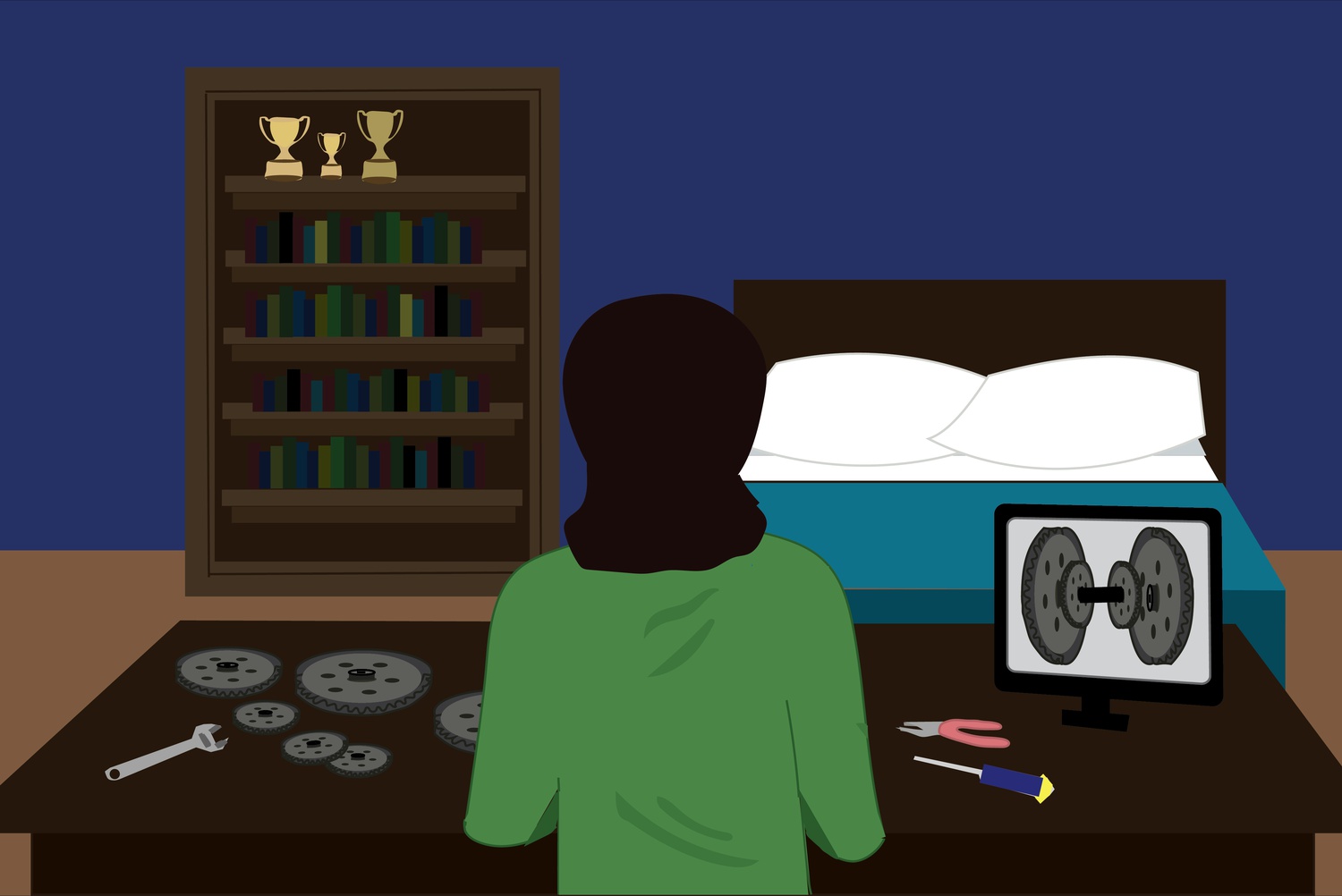 With limited or no access to SEAS laboratory equipment, many seniors had to adapt to researching and writing their thesis projects remotely. By Ashley R. Masci

In normal times, Environmental Engineering senior Elieen R. Egolf ’21 would have conducted most of her thesis research at the School of Engineering and Applied Sciences’ Active Learning Labs.

But with labs mostly closed due to the pandemic, she took an unusual approach to her research in an unusual location: she built a robot composter in the basement of her home in Montana.

Sourcing food waste from a local composting facility, Egolf amassed about 89 gallons of material to test her invention and woke up at 6:00 a.m. every other day for six weeks to conduct testing.

On Friday, she and other SEAS seniors celebrated the completion of their undergraduate theses and senior capstone projects, the culmination of a year of research conducted in spite of the logistical hurdles of an unconventional, largely-remote semester at SEAS.

With limited or no access to SEAS laboratory equipment, many seniors had to adapt to researching and writing their thesis projects remotely. Some relied more on computer-aided research, while others found inventive ways to still utilize in-person experimentation.

Robert Jomar S. Malate ’21 said he secured lab access to work on his Mechanical Engineering thesis by working for the Harvard Biology Design Lab, despite never having done research there before. In order to work in the lab, the University required him to live on campus in the fall semester.

Malate, who developed a buoyancy control unit for a robotic mermaid for his thesis, said one of the bigger challenges was a lack of access to the SEAS Active Learning Labs, which facilitate collaboration and provide access to equipment.

“Especially when you’re doing a project that’s very experimental-heavy or building-heavy, then this is something you want,” he said.

Malate added that not having access to the ALL meant it took “much more time to accomplish certain tasks” and that he wished the University would have been more flexible about allowing students access to the ALL on a “case-by-case basis.”

“There’s a way to achieve a compromise, [thesis writing is] already a huge challenge — jumping over extra obstacles doesn’t make the process much easier,” he said.

SEAS spokesperson Paul Karoff wrote in an emailed statement that the school wanted to focus on adhering to safety protocols ahead of all else while allowing students whatever lab use possible given restrictions.

“Everyone at SEAS would like nothing [m]ore than to have students back on campus – in the labs, classrooms and working on projects,” he wrote.

“During the past year, we’ve placed health and safety of students, staff and faculty above all other concerns. We look forward to gradually increasing access to campus, in accordance with public health guidance and university return-to-campus policies,” he added.

Linsey C. Moyer, associate director of undergraduate studies in Biomedical Engineering, said “almost everyone” writing theses in her department was able to get back into in-person labs in 2021.

“Because the labs also opened up in the spring, there was a large portion of the students who are working on theses who were able to go into labs,” Moyer said.

She added that the department shipped components like sensors and circuit boards to off-campus students for their theses, if necessary.

“It’s still not ideal, but that allowed them to do some physical prototyping without being physically on campus,” Moyer said.

Still, Moyer said she lamented the loss of access to the Active Learning Labs for students, noting that the “informal peer-to-peer learning” that happens at the ALL “just wasn’t present this year.”

Egolf said SEAS sent her a few pieces of testing equipment for her robot composter, but that her testing was “not as comprehensive” as it could have been pre-pandemic.

“There are a lot of other things that I was unable to do in testing and had to do proxy measurements to try to get more information,” Egolf said.

‘It Got the Job Done’

For some thesis projects, students had to conduct all their research remotely. Several SEAS advisors said many students designed or transitioned senior projects to center around computer-based models rather than bench experiments.

Elsie M. Sunderland, director of undergraduate studies in Environmental Science and Engineering, wrote in an emailed statement that students’ shift away from lab-based projects was “the biggest change” this year.

“I think this was unexpected and difficult for some but overall the students I worked with did a great job!” Sunderland wrote. “Everyone has made the best they can of the situation.”

Bioengineering concentrator Mark Theodore C. Meneses ’21, whose thesis explored preventing aggregation in drug formulation, was unable to test his research due to the lack of lab access.

Since no one at SEAS was working on antibody engineering — the focus of his project — Meneses had hoped to do lab work at Sanofi, a pharmaceutical company with labs in Cambridge. But Sanofi protocol did not permit him access to its lab.

Instead, he found himself learning modeling software to simulate his project virtually.

“I’m not a computer scientist, but I basically had to be that for my thesis,” he said. “I had to basically learn a bunch of modeling software to get it working and to test my material.”

Meneses said he did not believe his project was fully replicable in a virtual environment, so his resulting models were more of “an extremely good guess.”

“You really can’t do it on a computer — it might not be as accurate,” he said. “You really have to do it in the lab.”

Biomedical Engineering concentrator Nkaziewoh “Nkazi” Nchinda-Pungong ’21 said he “didn’t have as hard a transition” to remote thesis work because his project already had an emphasis on computer-aided research.

Still, Nchinda-Pungong said other students in his field have had to make sharp changes in order to computerize their work.

Nchinda-Pungong’s own wet lab project, which would have included hundreds of testing samples, had to be axed without access to a lab.

It is only now, after he turned in his thesis, that Nchinda-Pungong has restarted laboratory research on campus in the spring. Still, he said, pandemic restrictions on the number of hours he can spend in the lab have limited his productivity.

Lecturer Christopher J. Lombardo, who co-teaches the Engineering Sciences 100: “Engineering Design Projects,” a project-based course for seniors, said he required students to come up with capstone projects that could be completed remotely.

“What that really meant for many students, is a much greater reliance on scientific computation, modeling, simulation, things of that sort,” Lombardo said.

He added that his primary concern in creating the requirement was making the project equitable for all students, whether they were living on or off campus.

Because not all students could easily run high-spec modeling software on their home computers, Lombardo and his teaching team employed a “remote tool” designed by Harvard affiliates that would allow students to remotely access the software they needed for their projects.

“It wasn’t perfect, but it got the job done,” he said.

Lombardo said the pandemic has tested engineering students’ ability to adapt, which will prove crucial to their post-graduation work.

“It was a really big preparation for students when they’re entering the workforce in the real world,” Lombardo said. “Not everything is going to go the way you want it to, so you need your Plan A and a contingency plan.”

A previous version of this story incorrectly stated that the Engineering Sciences 100 teaching team created a tool with which to remotely access the software they needed for their projects. In fact, they employed a tool previously created by multiple teams across FAS and SEAS.

A previous version of this story misstated the state in which Elieen R. Egolf ’21 built a composter in her basement. It was Montana, not Colorado.