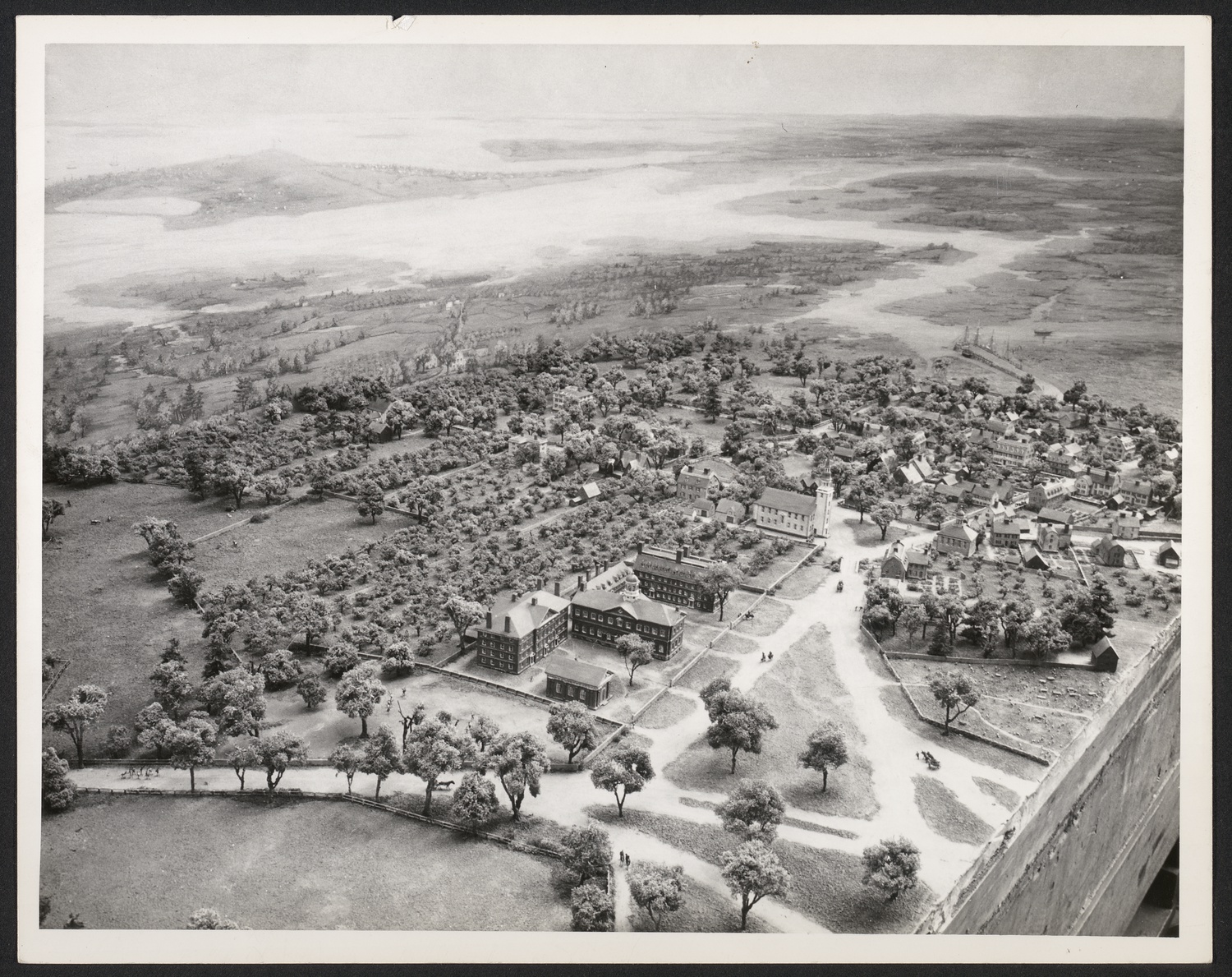 This 1947 photo shows the Pitman diorama of Harvard in 1775 looking down Cambridge Common. The year before campus became quarters for American militiamen amid the Revolution, Harvard Yard had only a dotting of colonial buildings. By Courtesy of HUPSF Models of the University (2b), olvwork359864. Harvard University Archives
Advertisement
Advertisement

In 1950, Harvard students entering Widener Library could feast their eyes on three dioramas depicting miniaturized campus history. If they turned right, they could picture themselves standing in 1677, when Old College stood where Grays Hall is now and the original Harvard Hall had not yet burned down.
By Kendrick N. Foster and Simon J. Levien

In 1950, Harvard students entering Widener Library could feast their eyes on three dioramas depicting miniaturized campus history. If they turned right, they could picture themselves standing in 1677, when Old College stood where Grays Hall is now and the original Harvard Hall had not yet burned down. If they continued down Widener’s west corridor, they could fast forward to 1775 and see Harvard “on the eve of the revolution.” Alternatively, if they turned left, they could see Harvard in 1936, and recall the pomp and circumstance of Harvard’s tercentenary celebrations.

Today, students climbing Widener’s stairs pass only water fountains and reading rooms. When Harvard renovated Widener in 2000, workers removed the dioramas. The Harvard Management Company, which manages the University’s endowment, moved the 1936 diorama to its office lobby, while the other two sat in storage and gradually deteriorated. That deterioration led alumni from the Harvard-Radcliffe Class of 1961 to embark on a project to restore the dioramas in time for their 60th reunion this May.

Each diorama depicts Harvard in a different season and at various historical bookmarks in the University’s growth. The 1677 model depicts the completion of the first Harvard Hall, with the original building of the University, Old College, still standing. The 1775 diorama showcases Harvard Yard peppered with more colonial-era buildings, a year before the campus was turned into troops’ quarters during the American Revolution. At the time, Harvard Square was just a triangular patch of grass with two trees on either side. The Allston campus and Business School were nonexistent, nothing more than marshlands across the Charles in the painted backdrop that hugs the diorama’s horizon.

The 1936 model pictures Harvard at its tricentennial, and depicts a nearly complete Harvard Yard, the gym now known as the Malkin Athletic Center, and the River Houses as well as a more familiar, bustling Harvard Square.

The dioramas — commissioned to honor the late Japanese art curator Ernest G. Stillman, Class of 1908 — are painstakingly detailed. Dioramist Theodore B. Pitman, Class of 1914, and a team of 10 others went to great lengths to get the dioramas right, down to the last detail. The 1936 diorama, for example, has more than 2,500 model trees, nearly 900 hand-carved buildings, and more than 1,000 vehicles, all set on a 100-pound base with a painted backdrop. 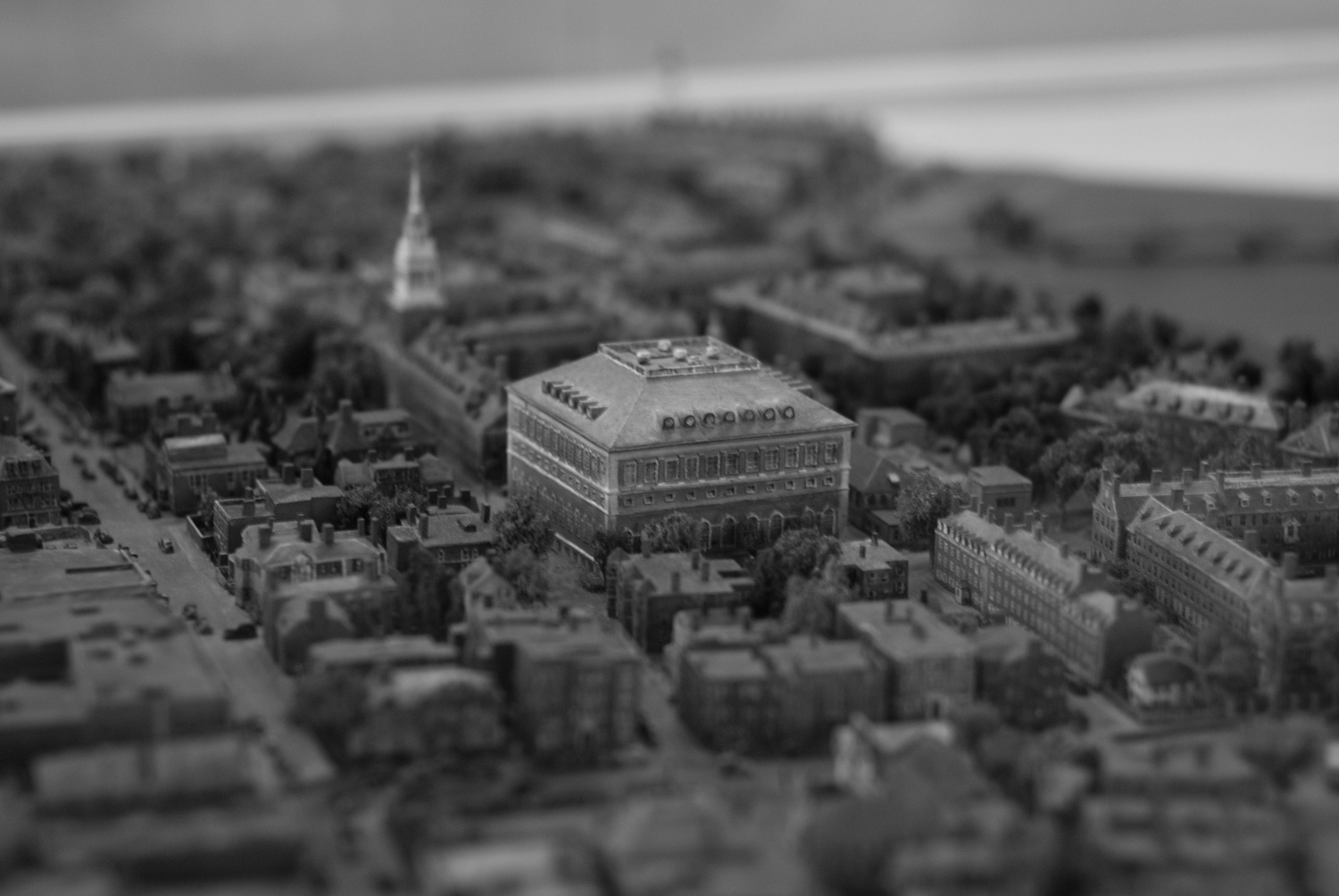 In a 1947 Harvard Library Bulletin, Rupert B. Lillie, a landscape architect who worked on the diorama project, wrote that the dioramas were gifted by an unnamed “friend of Harvard” to commemorate the University’s 300th anniversary and show Harvard’s expansion from a one-house school to a full-blown research university. In his letter, he divulged his extensive research process in making the dioramas as historically and geographically accurate as possible.

Lillie and the team consulted several libraries, archives, and historical societies for maps and surveys of the Cambridge area. Any areas that weren’t well documented were “systematically photographed” block by block, including the positions of individual trees, Lillie wrote. Lillie even went so far as to reach out to the Cambridge Fire Department and Boston Elevated Railway Company to ascertain how to model firehouse and railyard equipment.

At one point, a woman came into Pitman’s studio, which was in Harvard Square, to view the work in progress — and promptly discovered that Pitman had placed a tree in front of the wrong window in her miniaturized house, according to a Crimson article at the time. Presumably, the detail-oriented Pitman immediately rectified the mistake.

The Pitman studio began with a contour map of Cambridge and cast a plaster base for the diorama. The team collected sea algae in Nahant, Mass. to be repurposed as miniature tree leaves, budding off of faux trunks composed of lacquer-sprayed wire. They constructed and individually detailed University buildings using savogran and wood, and occasionally ornamented them with brass. At a scale of one inch per 50 feet, Harvard’s imposing 195-feet-tall Memorial Hall was reduced to about six inches in length; its spire rose 4.5 inches in the 1936 model.

"The detail that they went to, it’s maniacal,” says Zachary B. Nowak, a history lecturer at Harvard who has done research on the dioramas. “They were just ridiculous about making the buildings accurate.”

The campus dioramas called the corridors of Widener Library home for half a century, but deteriorated without thorough upkeep. Though they were placed into storage in 2000, the Harvard Management Company restored the 1936 model for display in its renovated lobby, where it remains today. 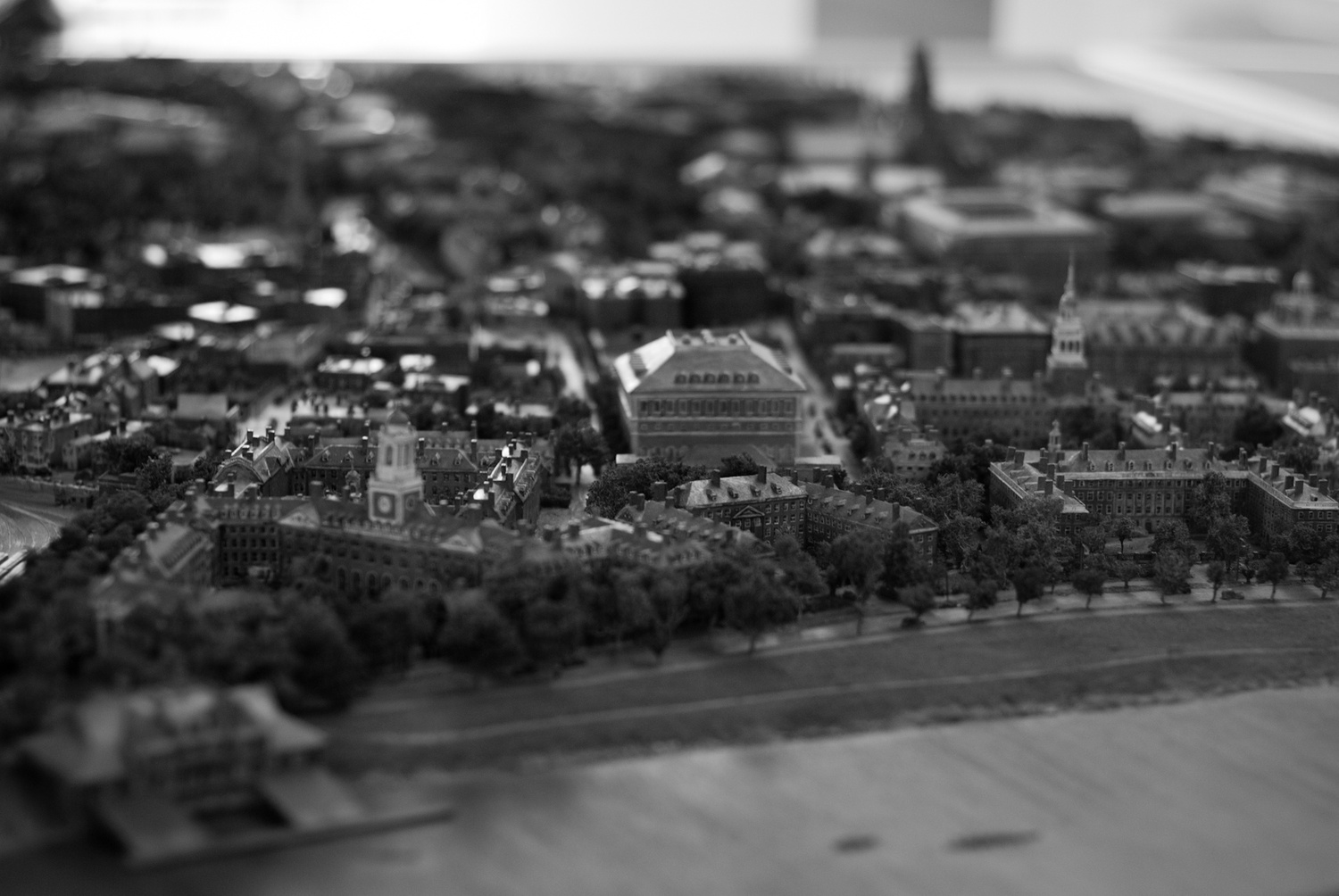 Another shot of the diorama of Harvard University campus in 1936 in the HMC lobby. By Courtesy of Harvard Management Company

According to Nowak, the other two models remain in a storage facility in Somerville.

In 2018, Newell Flather ’61, the then-president of the Class of 1961 — which includes both Harvard and Radcliffe graduates — somehow stumbled upon the dioramas and thought they desperately needed restoration. The Class of 1961 established a subcommittee to explore restoration options, conducted research, drew up plans, and identified a conservator.

Why did the Class of 1961 choose the dioramas as their permanent class gift to Harvard? “We are all over the age that most of us knew them and remember them with fondness. They had a certain magic about them,” says class member Todd Lee ’61.

On March 13, 2020, the 60th Reunion Committee announced that it had successfully raised more than $300,000 for the restoration, meaning that the project could go forward.

Sarah L. H. Madden, a project manager for Harvard Campus Services, wrote in an emailed statement that “a restoration artist, a painting conservator, a case designer, and a lighting expert” have all been enlisted to work on the dioramas, which will be finished and housed in new display cases by the summer.

For the last four months, conservator Barbara Mangum says she’s undertaken and nearly completed restoration work on the 1677 and 1775 dioramas.

“I was both in awe of the amount of detail that there was and then also kind of appalled by the condition,” Mangum says. “We have speculated that a cat walked over it, but a cat would be pretty careful.”

For the 1775 diorama, 80 percent of the nearly 2,000 trees and about 80 model buildings needed significant repairs, according to Mangum. Due to a huge crack down the middle, it also needed to be stabilized.

During the cleaning process, Mangum says she had to be careful not to vacuum up any miniature pedestrian and animal figurines, often as small as “the tip of your fingernail.”

In January 2021, the Reunion Committee voted to add a video component to the project. According to documents obtained by the Crimson, the Committee has raised around $80,000 out of the $130,000 needed in the campaign. According to Thomas N. Blodgett ’61, the president of the Class of 1961’s class committee, the Committee believed that they could not convince the Harvard Management Company to part with the 1936 diorama, so they decided to at least reunite the three dioramas via video. “We can juxtapose the same visual, the exact same visual angle, magnification, et cetera, on all three in three seconds with a video,” he says.

Lee, who says he has the “over-grand title of executive producer” for the diorama video project, plans to begin filming the dioramas later this month, both at the restoration studio and in the HMC lobby.

But after restoration, the dioramas’ future is unclear. Harvard still owns the dioramas, and no decision has been made on where they might be displayed. Both Lee and Nowak say they hope they can be displayed prominently in the heart of campus for others to learn from.

“[The dioramas] tell, in a quite powerful way, the story of the physical reality of Harvard at different points in its growth. We would like best to have them displayed on Harvard campus near the Yard where visitors can see them,” Lee says. “But we haven’t found a home for them yet.”

A 1955 Crimson article speculated the next date for a new diorama’s construction would be 2036, or Harvard’s quadricentennial.

“This model would include such post-1936 buildings as Littauer, the Graduate Center and Lamont Libraries, as well as future buildings,” the author of the Crimson article predicted. With the University expanding further into Allston and the Greater Boston area, a diorama of present-day Harvard would be far-reaching.