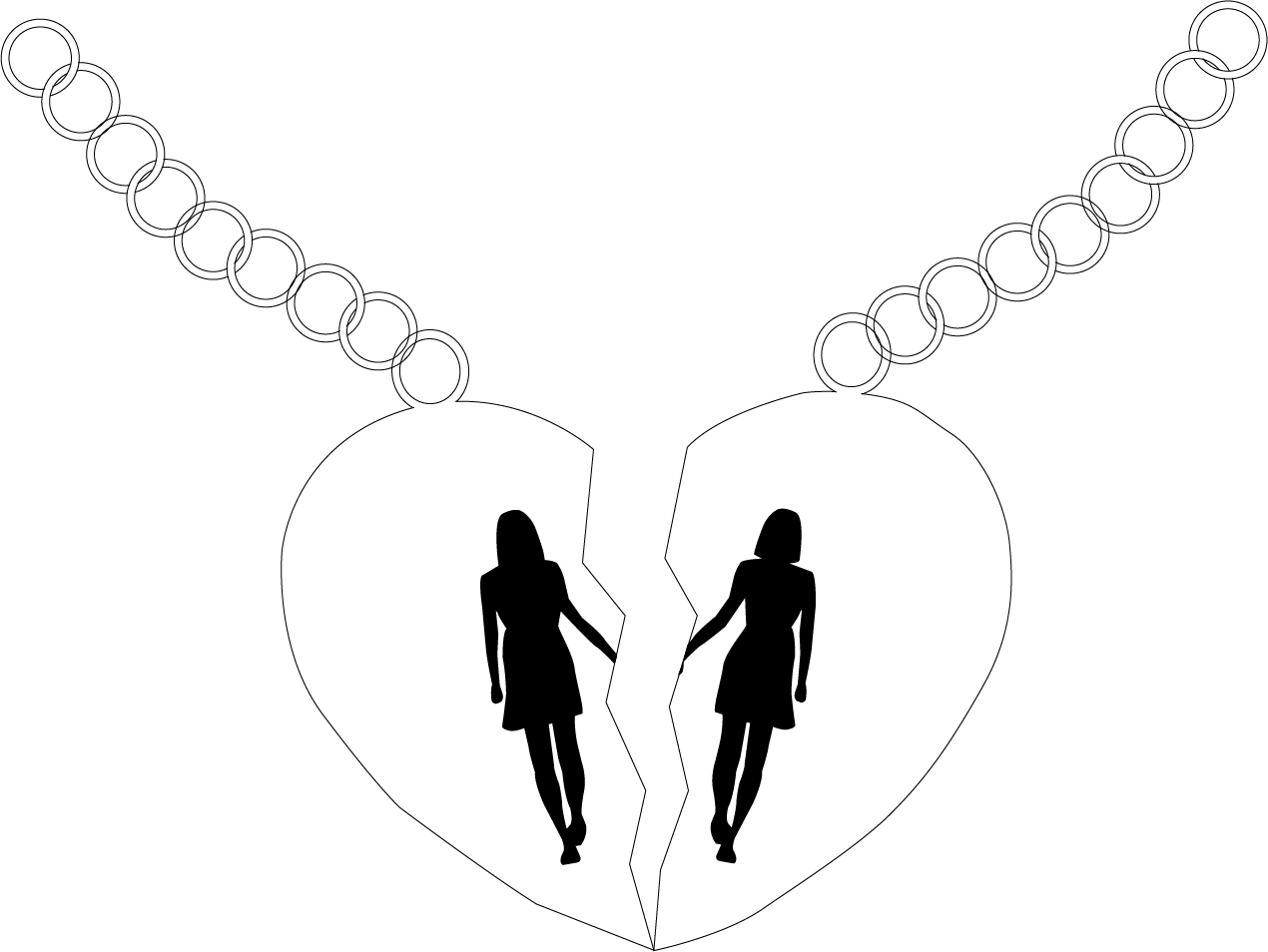 I left later that night, relieved that I wouldn’t have to see Gayatri until the next winter but also wondering whether I had said too much. And sure enough, that one genuine moment came back to bite me.
By Maya S. Bhagat

“You don’t have to go if you don’t want to,” my sister reminded me.

“I promised I would bring her souvenirs from France,” I sighed. It seemed petty to deny her this just because we were having problems.

Or maybe I was the only one who saw the problems. Gayatri met me in the lobby of her apartment building with a big hug, and I felt guilty for the treacherous thoughts I’d been having. I smiled as we filled each other in on the past few months — our first years at college, love lives, politics — but it was only a matter of time before our common ground came up: school. We had a small secondary school class of about 20 students that had stayed relatively constant over the four years, which made for lots of too-close friendships and drama I was trying to put behind me.

“I was so excited to get back in touch with Amit!” she exclaimed, speaking of her childhood friend. I’d liked him for a while, but he’d rejected me and made my life unpleasant for the rest of high school.

“That’s great!” I said, faking a smile. She saw through it, and then I fumbled. “Gayatri, you know how he was in school, how he’d manipulate us for academic help. Just be careful; he’s a bit insecure.”

I left later that night, relieved that I wouldn’t have to see Gayatri until the next winter but also wondering whether I had said too much. And sure enough, that one genuine moment came back to bite me.

On my first day of seventh grade, I got off the school bus, confused. My new school just outside Mumbai, India was 10 stories high, and I had no idea where to start looking for my classroom.

“I can show you where our classroom is,” said a voice. It was the girl who’d sat behind me on the bus. She had honey-colored eyes and dark brown hair that was almost but not quite black. “I’m Gayatri.”

As we walked up eight flights of stairs together, she told me everything there was to know about our class. “We have 25 students in the seventh grade international section,” she said, “and remember to never say you like ice cream.”

“Okay,” I said quizzically, panting as she led me into my new classroom. A dozen girls flocked around me, exclaiming over how tall I was, asking me where I was from and what America was like. I tried to look around for Gayatri, but she had disappeared. Indeed, I didn’t talk to her much in seventh grade, feeling lost in a new country with languages that passed through my ears but not my lips and lonely in a class where most of the students bullied me for being too studious. That year, I learned that long-distance friendships usually don’t last, and that “Ice Cream” was the nickname of a popular boy in our class.

Gayatri didn’t resurface in my life for more than 10 months, until she called me the night before the start of eighth grade.

“Maya, can we be best friends this year?” she asked.

I felt oddly flattered, and after a year with not much of a social life, the prospect of a new friend was welcome. “Yes! See you tomorrow on the school bus,” I said.

We sat next to the window in my living room, the shutters opened wide to let in a cool breeze, soothing us from the muggy Mumbai air. Our faces were lit only by the soft white overhead light that cast little flecks of color around us.

“It was so scary, not knowing what was happening, not knowing what people were saying about me,” Gayatri said, and I remembered last year, in seventh grade, when the girls in our class spread rumors about her to her boyfriend, who subsequently broke up with her.

My heart melted a little. There was someone else in my new school who understood how it felt to be shunned. We talked for what felt like hours, but only 20 minutes later she got a text from her mother waiting downstairs.

Gayatri and I were inseparable. We rode the bus together every day, chatting the entire way to school about our problems and exchanging advice. We found solace in each other. She needed me just as much as I needed her.

She held me as I cried my heart out after I confessed to Amit that I liked him and he told me to go away. “You didn’t do anything wrong,” she said firmly. “You just told him how you felt.”

I heard her words over and over again, feeling empty except for them. And even though my heart was broken that day in eighth grade, I felt blessed to have found such a supportive friend.

Field trips were not a common occurrence, and I was in an abnormally good mood. My friends and I sang songs and played games on the way to the museum, and I asked the curator lots of questions. So I was surprised when Gayatri called me that night, sounding upset.

“You weren’t acting like yourself today. I know you’re a good singer, but you were hogging attention. And you were flirting with Amit.”

“Sapna was singing along with me, and we were talking to a lot of people today.”

“This isn’t like you. You’ve changed since you started wearing your contacts to school,” Gayatri said reproachfully. I could hear the anger in her voice and immediately felt ashamed but also confused. I didn’t understand why it made her so irritated to see me happy. I swallowed my pride and apologized even as I knew I was making a mistake.

Gayatri and I sat in my bedroom one night when we were 17, cross-legged on the floor, jamming to the latest songs from the “Ae Dil Hai Mushkil” album together. Since we no longer attended the same school and had busy schedules in 11th grade, our time together was scarce. All of a sudden, the music stopped — her phone was ringing.

My heart sank when she picked up and greeted her boyfriend. “Hi Reena,” she said, calling him by a fake female name, so that my parents wouldn’t hear her talking to a boy. I closed my eyes as she spoke to him animatedly. I told myself not to be jealous. Her parents were much stricter than mine, and obviously she’d have more freedom to talk to him at my house than at hers. That was also why she forced me to go to the birthday parties of people I didn’t like and dragged me to the movies but sat with someone else.

After she hung up, Gayatri left to retrieve her toothbrush, not bothering to apologize. The moment was over.

Twelfth grade was a stressful year, and our meetings became even more infrequent. I tried to meet Gayatri the weekend before a big chemistry test, but as usual, she cancelled at the last minute. Later that week, when I was settling onto the couch after an exhausting day at school, I checked my phone to find a text from her.

“Can we meet today? Let me know fast. Also I won’t be free for a few weeks after this so please say yes. I miss you.” Gayatri’s bossy texts would normally make my blood pressure rise. I knew she was doing an intensive entrance exam prep program alongside school, but we always met at her convenience. For now, I was just tired. Before lying down, I unplugged my home phone and silenced my cell.

Once I went to Harvard, we talked even less. Gayatri and I exchanged messages every few weeks, but staying in touch was difficult. Part of me felt guilty that I had this new life, while she was still living with her parents. I didn’t need her as much as I used to — I made new friends at college who gave me more space, and I really bonded with my roommate during my study abroad program freshman summer. After I gave Gayatri the Eiffel Tower and French newspapers I bought for her from Paris, I exhaled, feeling relieved I wouldn’t have to see her for a few months.

“Bro, what did you say about Amit?” my friend texted me the next day.

My heart stopped as I read further: “He’s really upset. He keeps saying that you said he was insecure? I thought you guys weren’t talking anymore.”

“We aren’t,” I typed, dumbstruck. This was not the first time that Gayatri had shared something I’d told her in confidence. I wondered if I should confront her, if it was worth trying to hold together a friendship that had been splintered time and time again.

My Paris roommate’s words came back to me. “Well, if you feel like you can’t trust her, I think you have your answer.”

I had been ignoring her texts, and my heart would sink seeing the missed calls. But after she sent me an angry email sophomore year, I decided I had to stop being passive.

“Why aren’t you answering my calls?” she said angrily, picking up the phone.

My hands started shaking even though I had planned what I would say when she accused me.

“Gayatri, I don’t think we s-s-should talk anymore. Our f-f-friendship has become — toxic,” I managed to gasp.

I felt awash with guilt. I closed my eyes and thought about all the times we laughed and made up silly stories to understand chemistry but also the pain of her incessant teasing. There was nothing else to be done. Something had broken, and no amount of dialogue would bring closure for either of us.

Gayatri sent me some emails afterwards, and she still finds ways to send me birthday wishes. My sister tells me she’s being manipulative, but I’m not so sure. I think it’s quite possible that she doesn’t see how things fell apart, that she betrayed me without being fully aware of it. After I started wearing contacts and went off to college, maybe she didn’t recognize me anymore. But to me, she has become unpleasantly familiar — the weight of a shared past I no longer want to carry.

— Magazine writer Maya S. Bhagat can be reached at maya.bhagat@thecrimson.com.