Portraits of a Year Apart 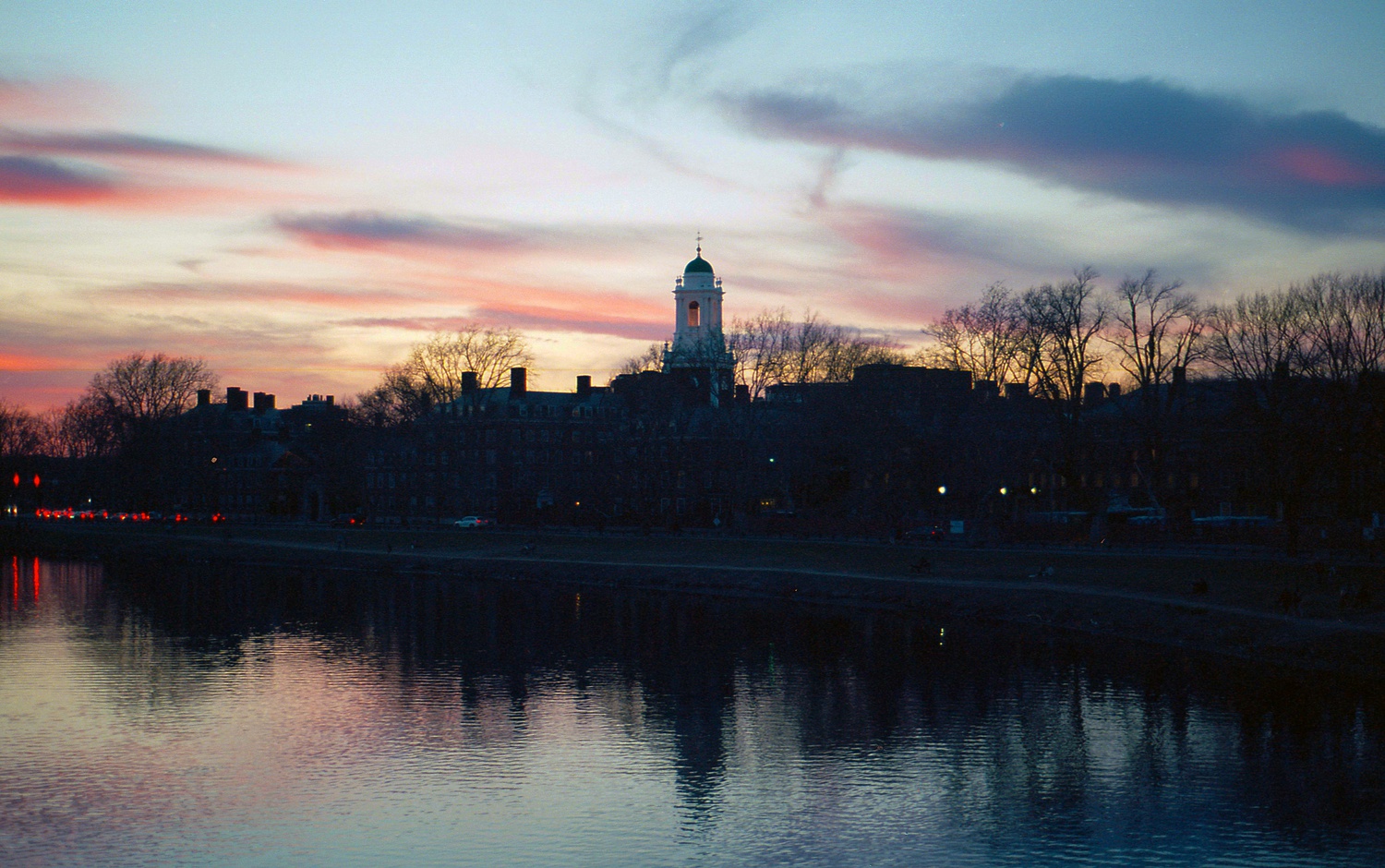 By Charles K. Michael
By The Crimson Editorial Board

Last Commencement, our Editorial Board faced a conundrum: How could we summarize the past three months — suddenly fleeing campus, quarantining in our homes, coping with a new virus both world-stopping and unknown — through a collective voice, when what ultimately unfolded for each of us was a deeply personal experience?

We couldn’t. Any single narrative would be reductive, and any attempt to capture all perspectives in one voice would dilute them all. We instead adopted a medium new to Crimson Opinion, and gave our board members the chance to tell their own stories. From what is usually one mouthpiece, we brought forth many vignettes of the pandemic’s early days.

One year later, our board has still not reunited in-person. Below is a testament to where we’ve been in this time we’ve spent apart, with pictures to illustrate — as much to you as to each other — where this pandemic year has found us. 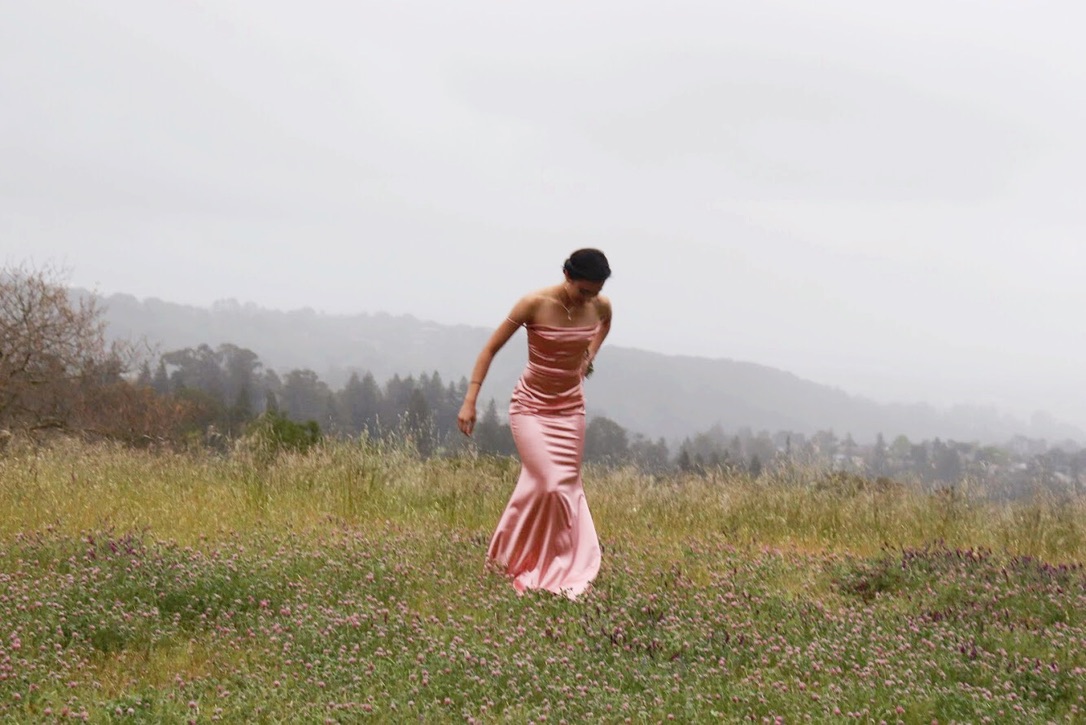 By Courtesy of Eleanor V. Wikstrom

With traditional senior-year celebrations canceled, I didn’t want to get my hopes up. But at the very least, I could be excited for pink satin, my friend's bluetooth speaker, a corsage of front-yard flowers — the lovely bones that remained. In the end, we had everything we needed. 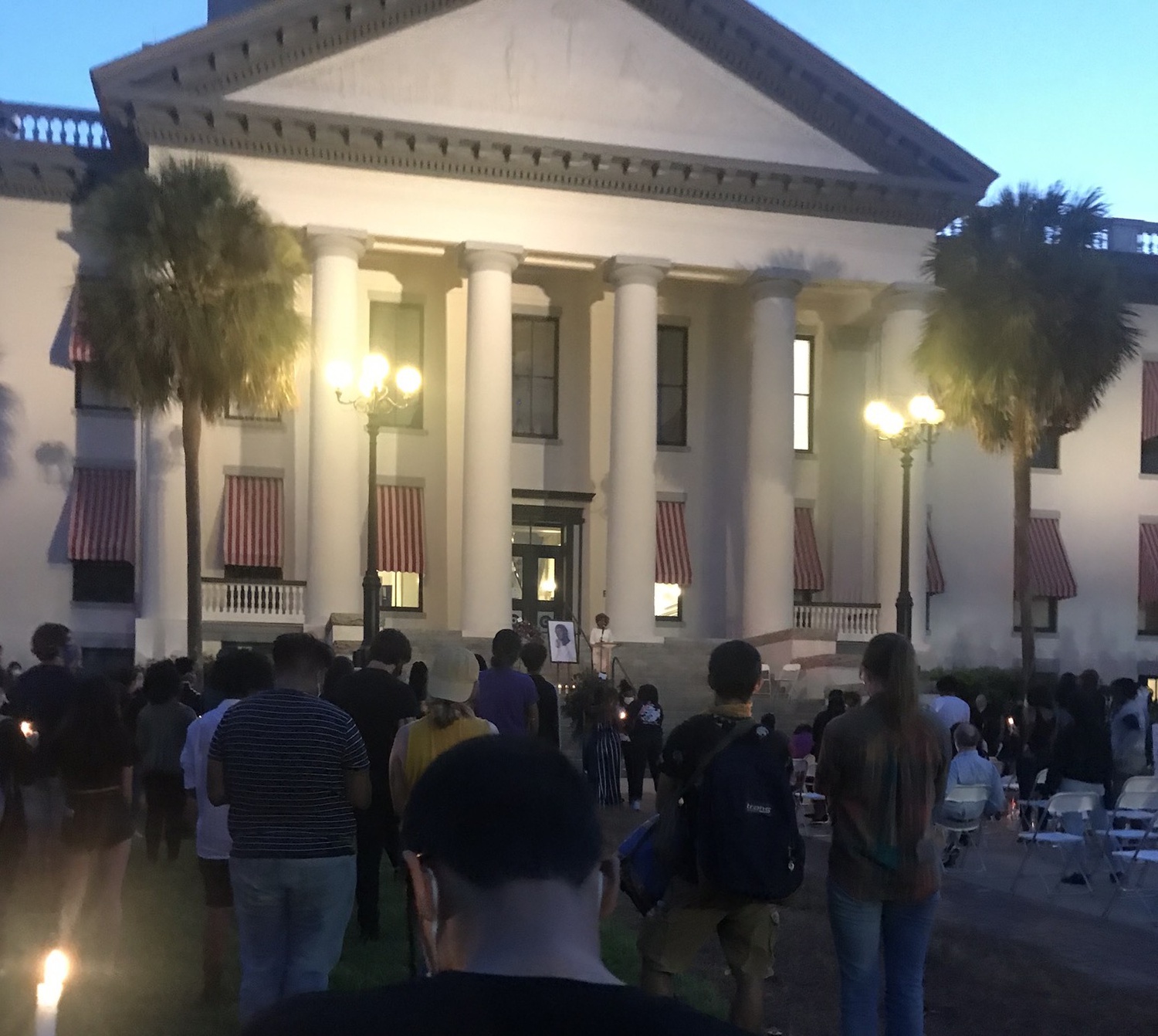 A family friend, Oluwatoyin Salau, went missing days after I watched her speak at a Black Lives Matter protest; the first in Tallahassee last summer. She was 19 and, as I listened, I remember filing her in my head as a role model: so smart and beautiful. During the days before her body was found, I felt incredible suffocation: Were we being hunted? They held her vigil at the state capital. 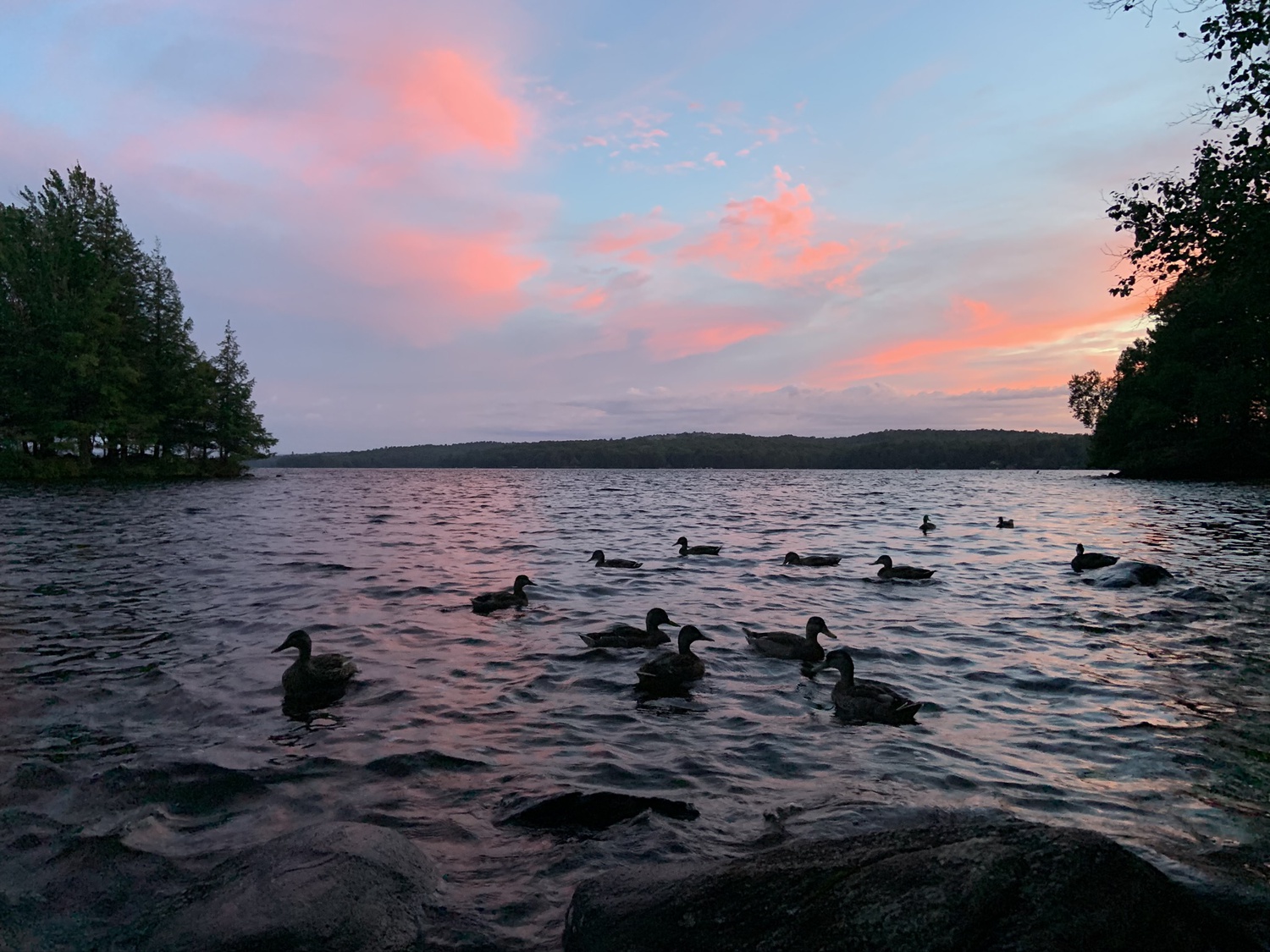 By Courtesy of Chloe A. Shawah

To escape the house, my mom, sister, and I went camping in the Adirondacks. After the campus eviction notice in March, I remember standing on Weeks Bridge, looking out at the Charles River, and wondering where the ducks go when the river freezes over. Or rather, where the students go when the school shuts down. I found some answers among the trees. 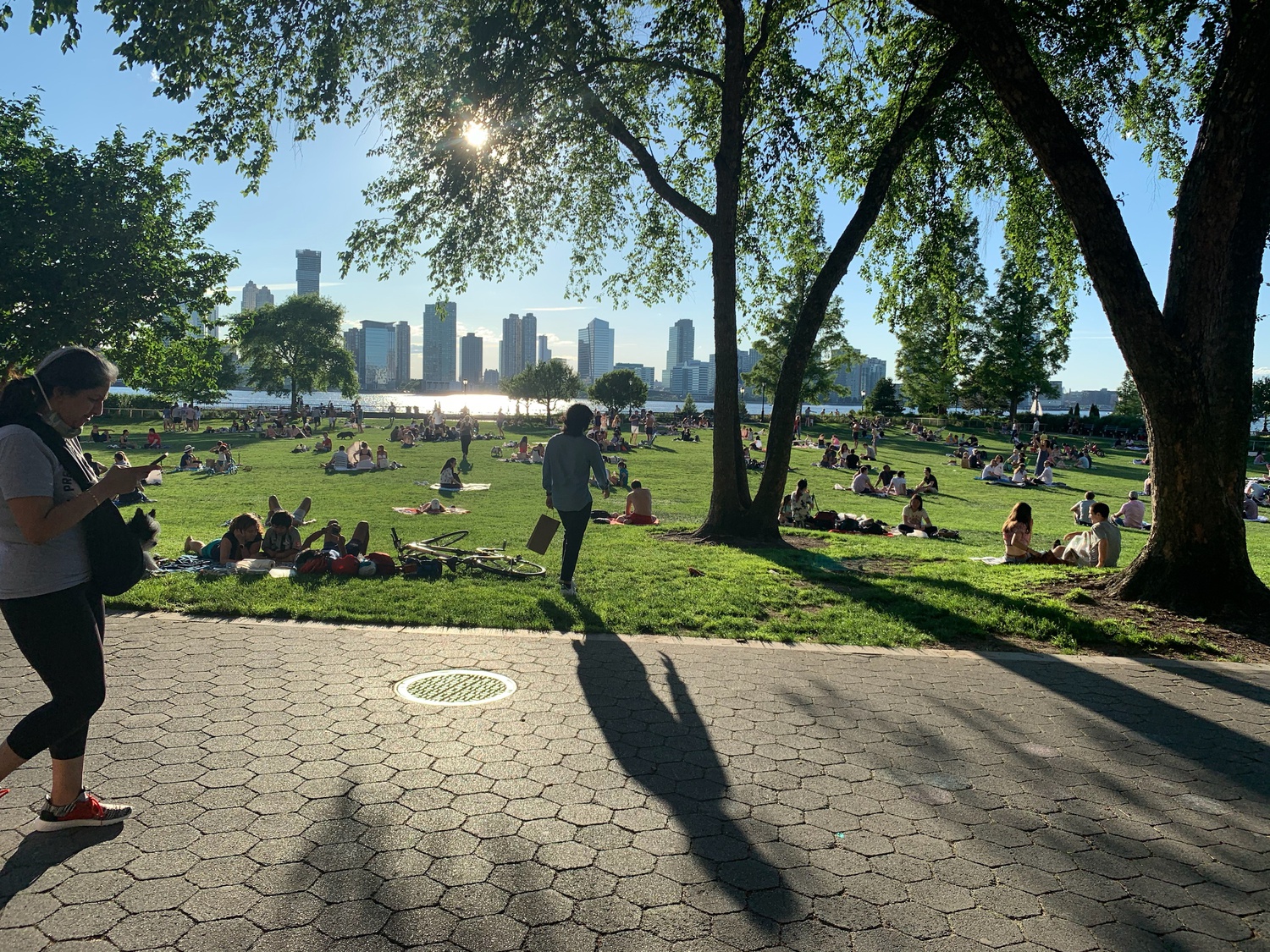 By Courtesy of Gordon J. Ebanks

It was strange being in the city again after so long. I walked by the high school that I didn’t get to graduate from because my last months were spent on a computer screen. I walked by, not to clean out a locker that’s no longer mine or to pick up a diploma that can’t be sent in the mail, but just to sit here and see this. 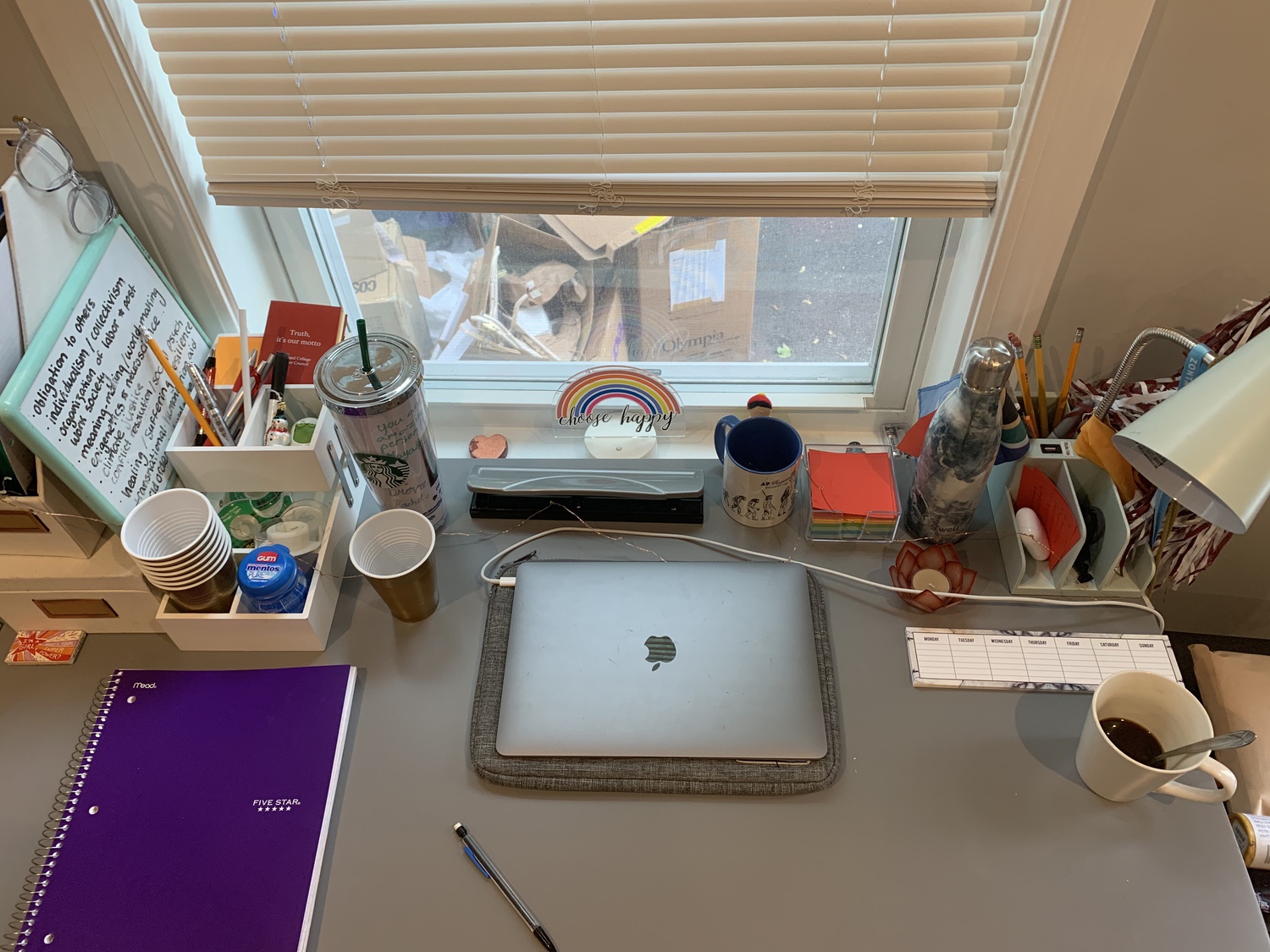 By Courtesy of Aysha L.J. Emmerson

Constructed using a pair of scissors, impatient hands, and “inspiration” gleaned from Ikea’s instruction manual, my desk was a point of pride and precarity: a makeshift desk for a makeshift school year. One erratic gesture away from collapse, with time and familiarity, its wobbly edges eventually became imperceptible to me. 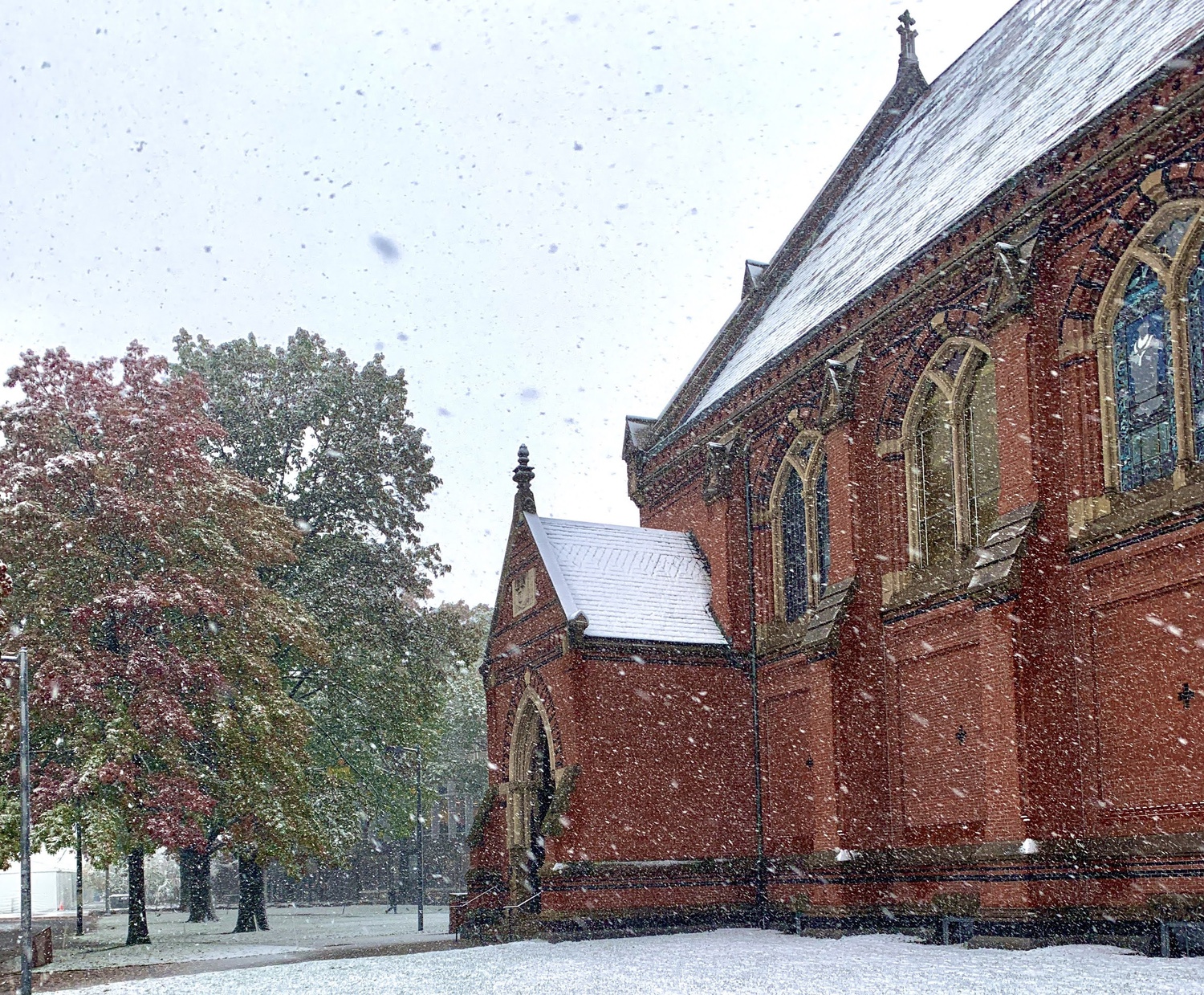 By Courtesy of Nicole B. Alexander

After deciding a little snow wouldn’t stop me from going about my morning, I took this photo after walking from the Malkin Athletic Center to Annenberg. For the first time in my unpredictable fall semester, everything felt normal. The Yard came alive that day – everyone enjoying the first snow of the season. 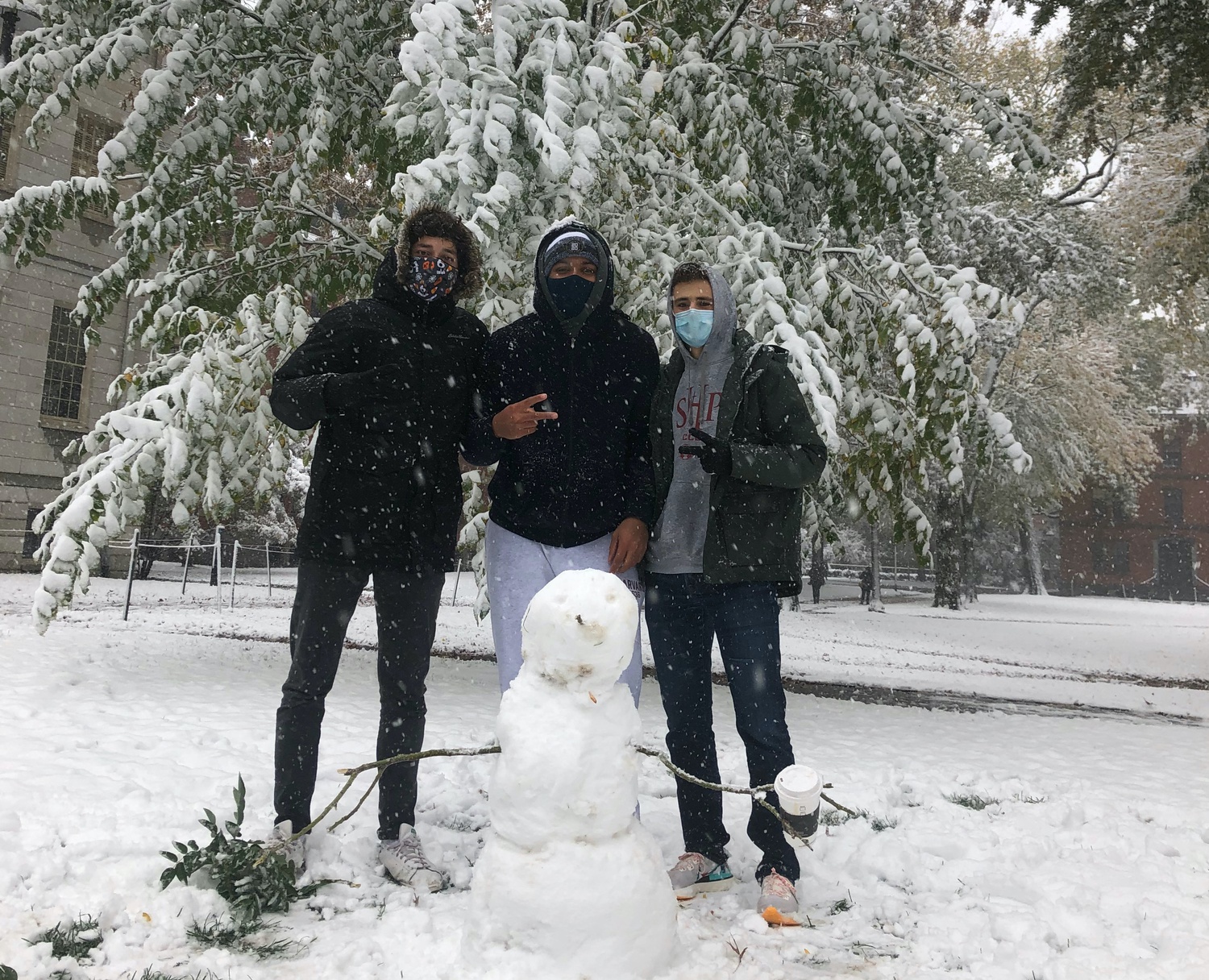 By Courtesy of Manny A. Yepes

We took this photo after the first snowfall last semester. Every freshman from the South or California (myself included) went crazy building snowmen, since we hadn’t seen snow in years. Right after this photo, we started throwing snowballs at John Harvard, which quickly ended once I hit Dean Khurana’s window. 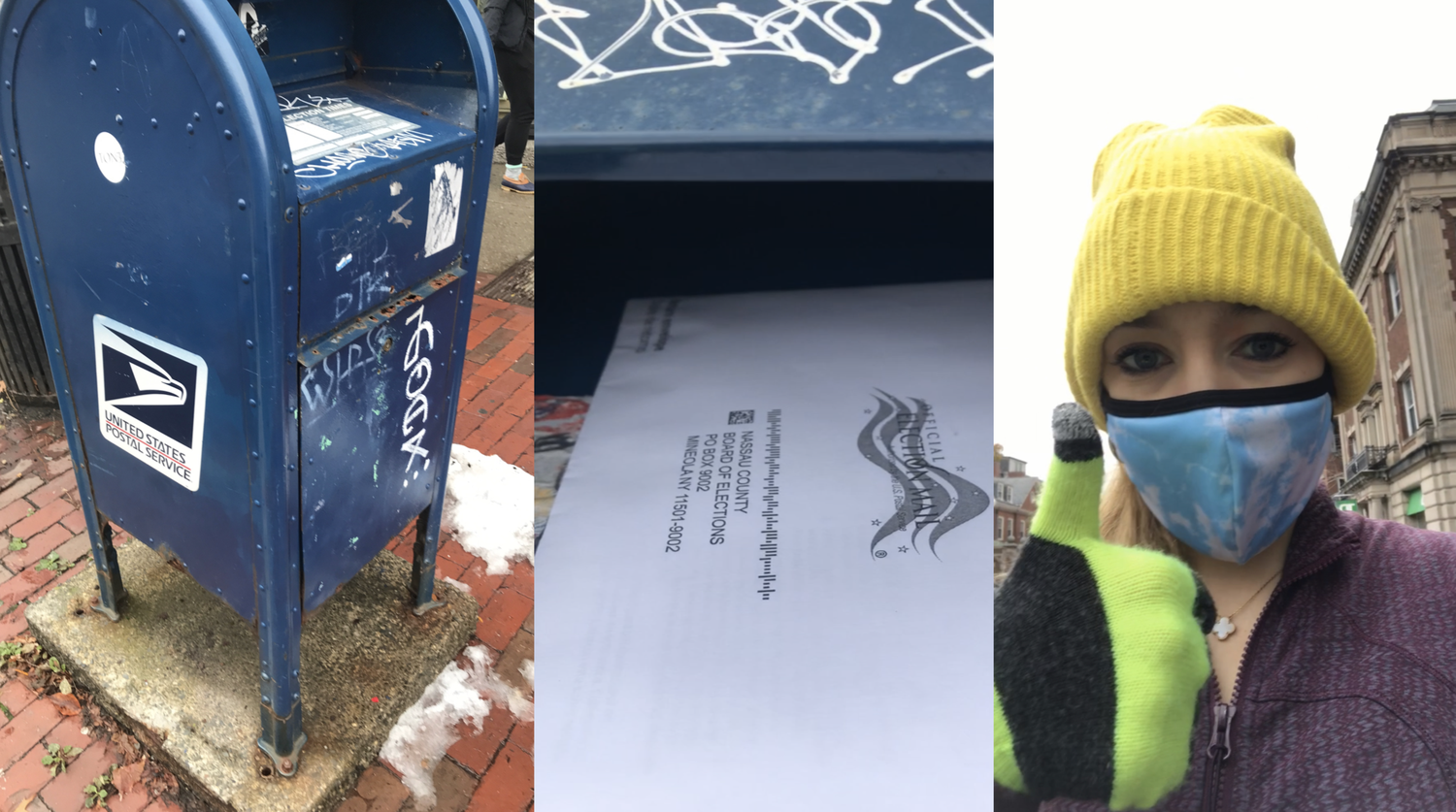 By Courtesy of Gemma J. Schneider

My first time voting in a U.S. presidential election. Roused by the high stakes of the race, my hands were shaking so much that I hardly even managed to take these pictures. But rocked by the frigid air, fueled by caffeine, and motivated by hope, I managed to capture all three … and if I were to have torn off my mask for that third photo, I would have also captured a glimmer of a prescient, winning smile. 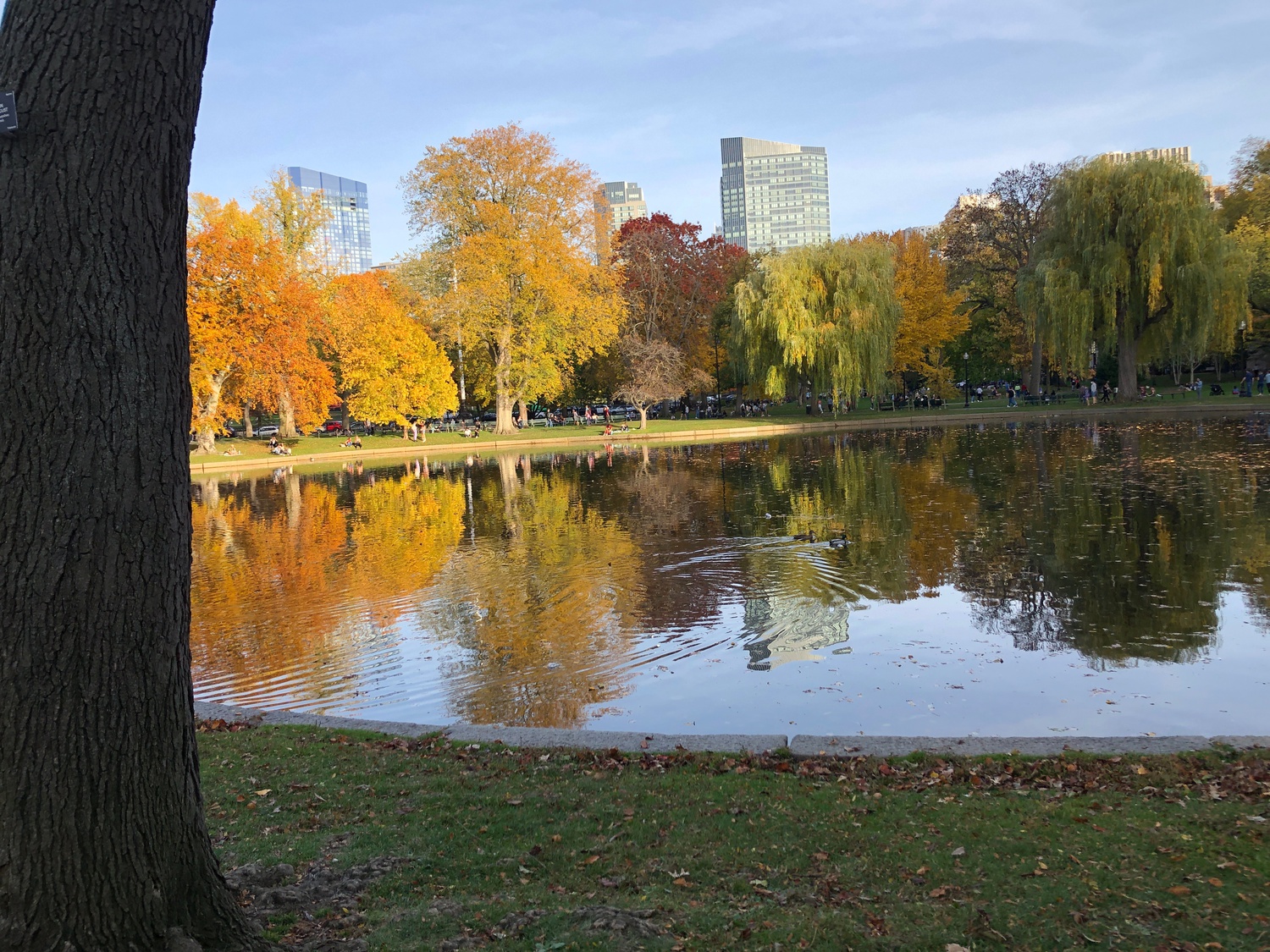 By Courtesy of Orlee G.S. Marini-Rapoport

I left my dorm and headed into Boston when the election was called for Biden. Everyone was celebrating. Covid was still a looming threat and we didn’t yet know about the highly effective vaccines, but in this moment there was finally hope for a better future — and for a return to campus. 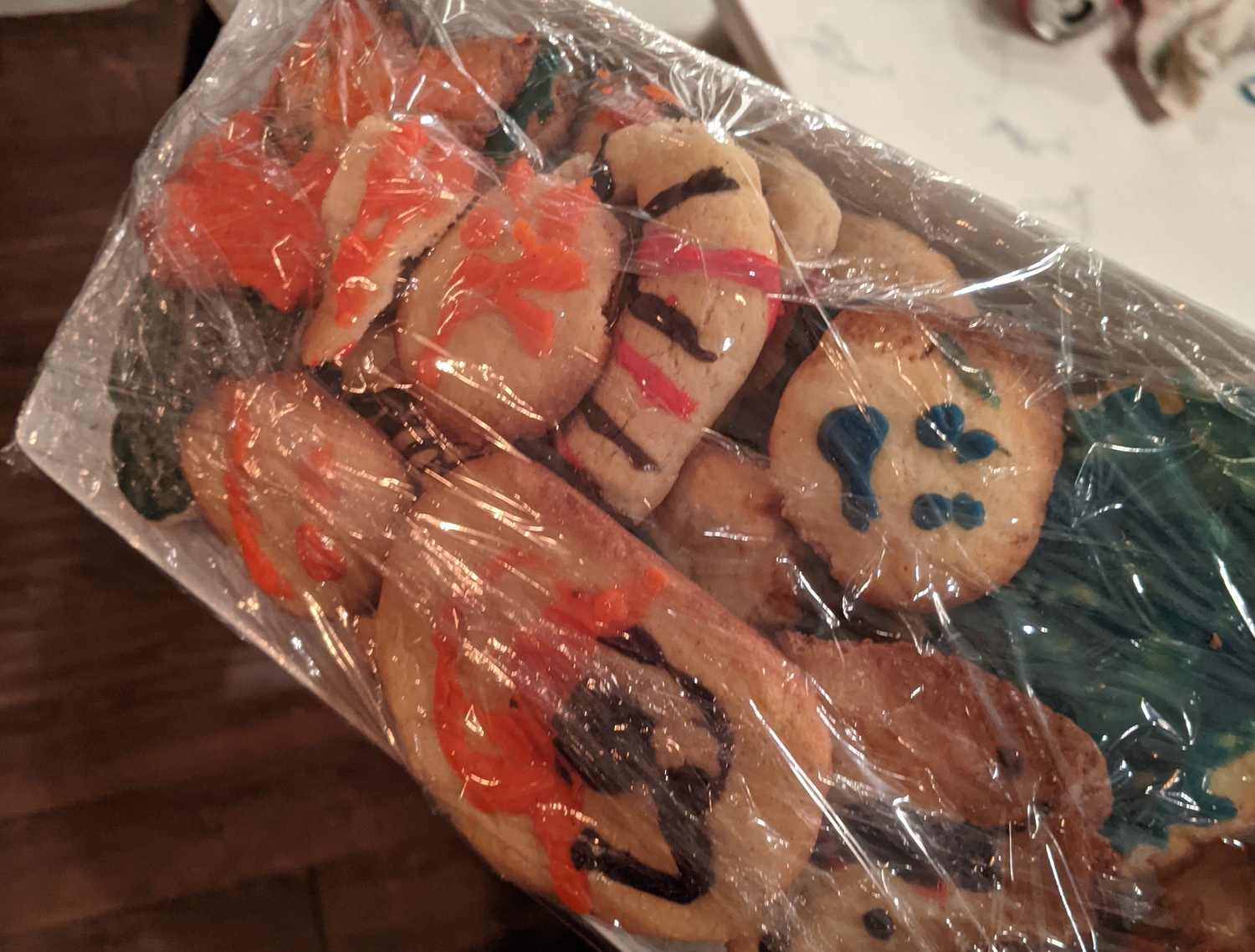 This Christmas “break” was different. Rather than a soothing return to home from school, it was a refreshing reprieve, a little more time with my loved ones. I am eternally grateful to have had my siblings, nephews, mother, and grandparents to make deliciously burnt shortbread cookies with this season. 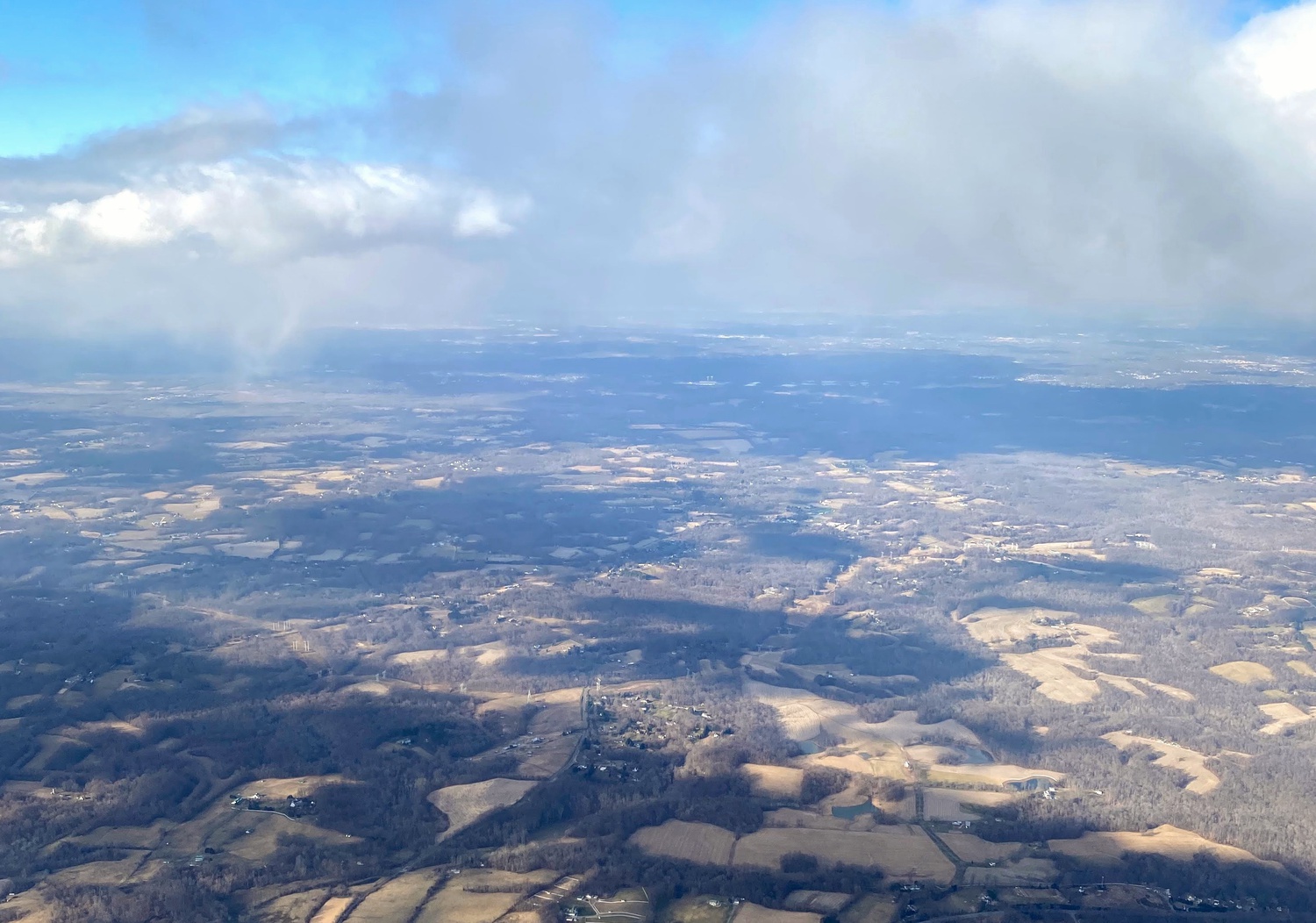 Flying back to campus for my second semester, I realized that the world is both much bigger and smaller than expected. I thought about the trees and their cycles of shedding then regrowing their leaves, finding comfort in nature’s continuity. I looked forward to the spring — wanting to grow, too. 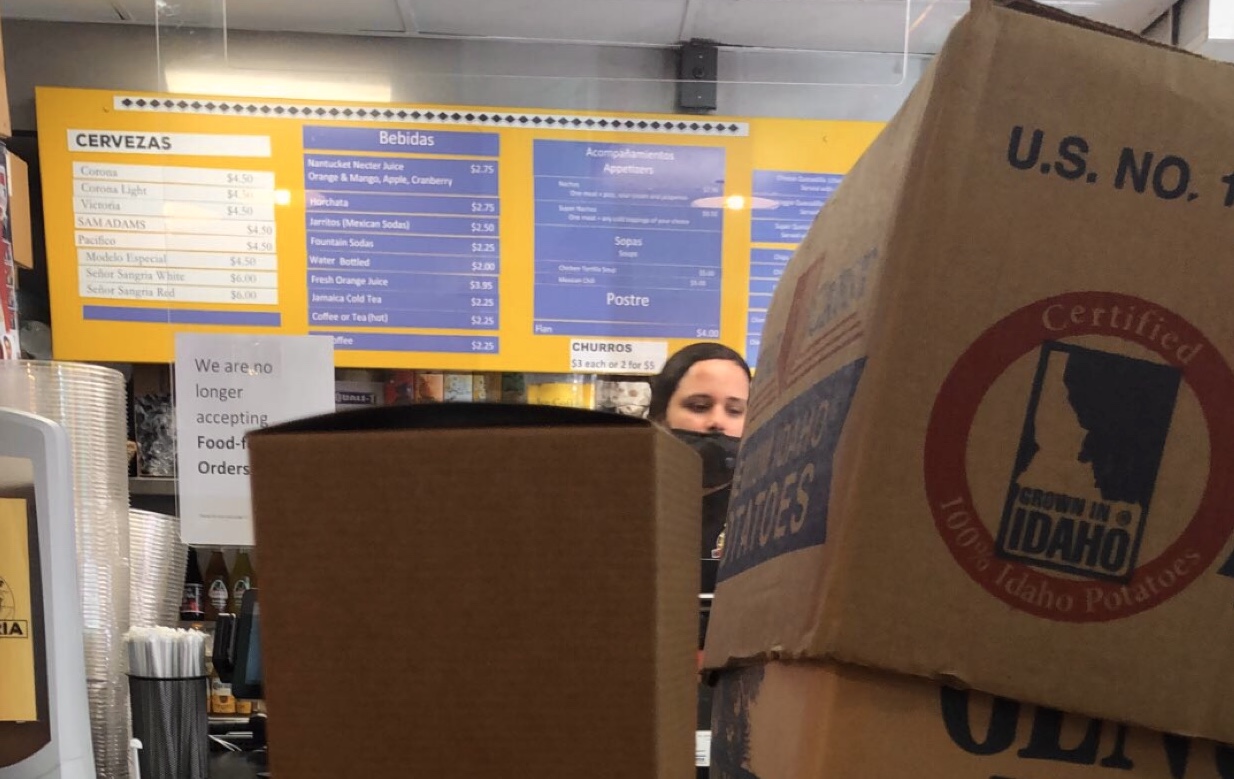 By Courtesy of Jordan R. Robbins

Seeing Harvard for the first time in February was astonishing, but as a foodie, collecting cuisine from surrounding restaurants was much more nourishing than the non-nutritive architecture. Delighting in Tatte’s cheesecake cups, El Jefe’s burritos, Mike’s Pastry cannolis or Dumpling House’s seafood dumplings defined the start of my Harvard experience. 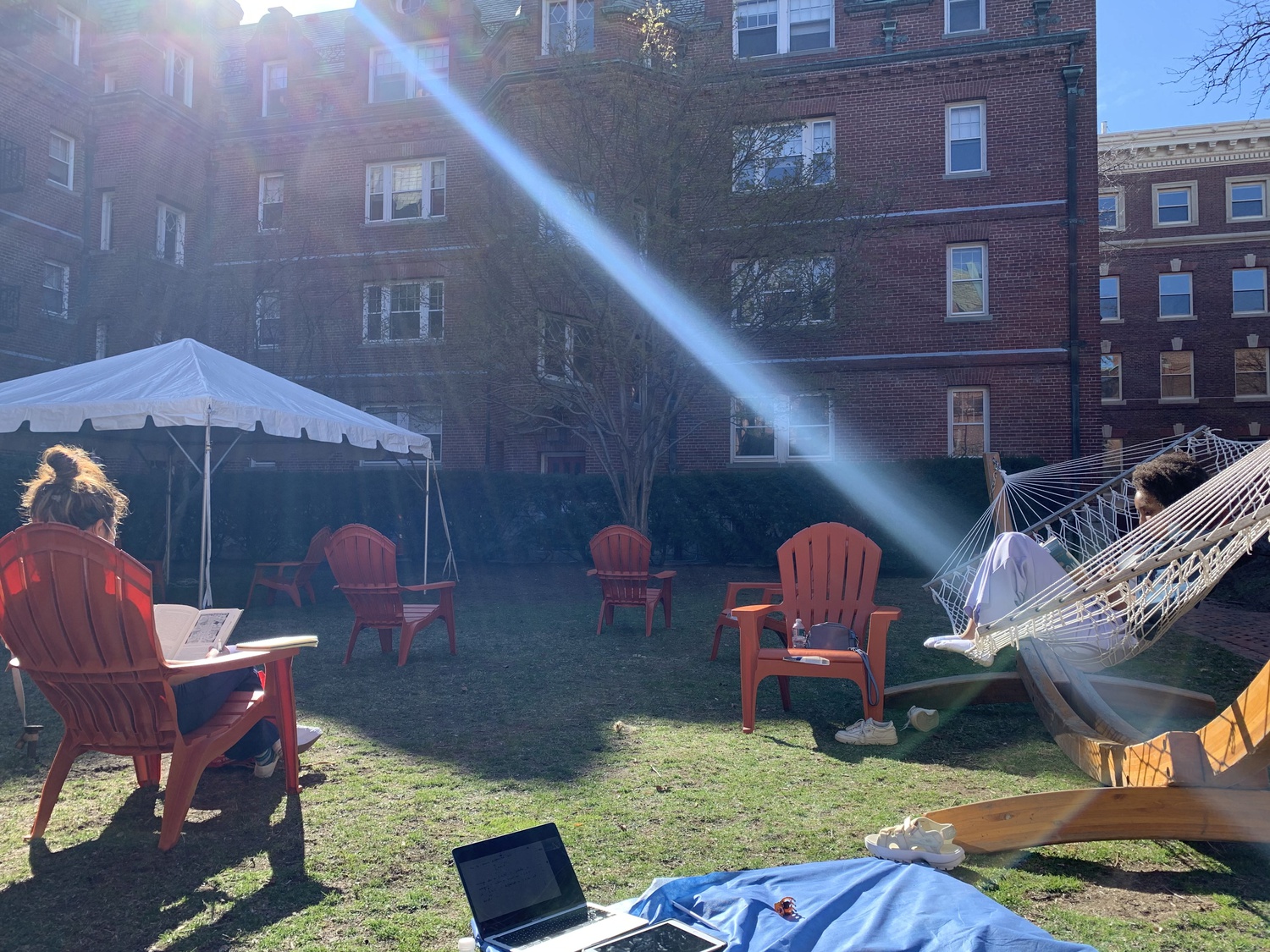 By Courtesy of Annabelle J.L. Finlayson

More or less confined to each other’s company this semester, my roommates and I spent every waking minute together. I wouldn’t trade a single second of that precious time for anything. 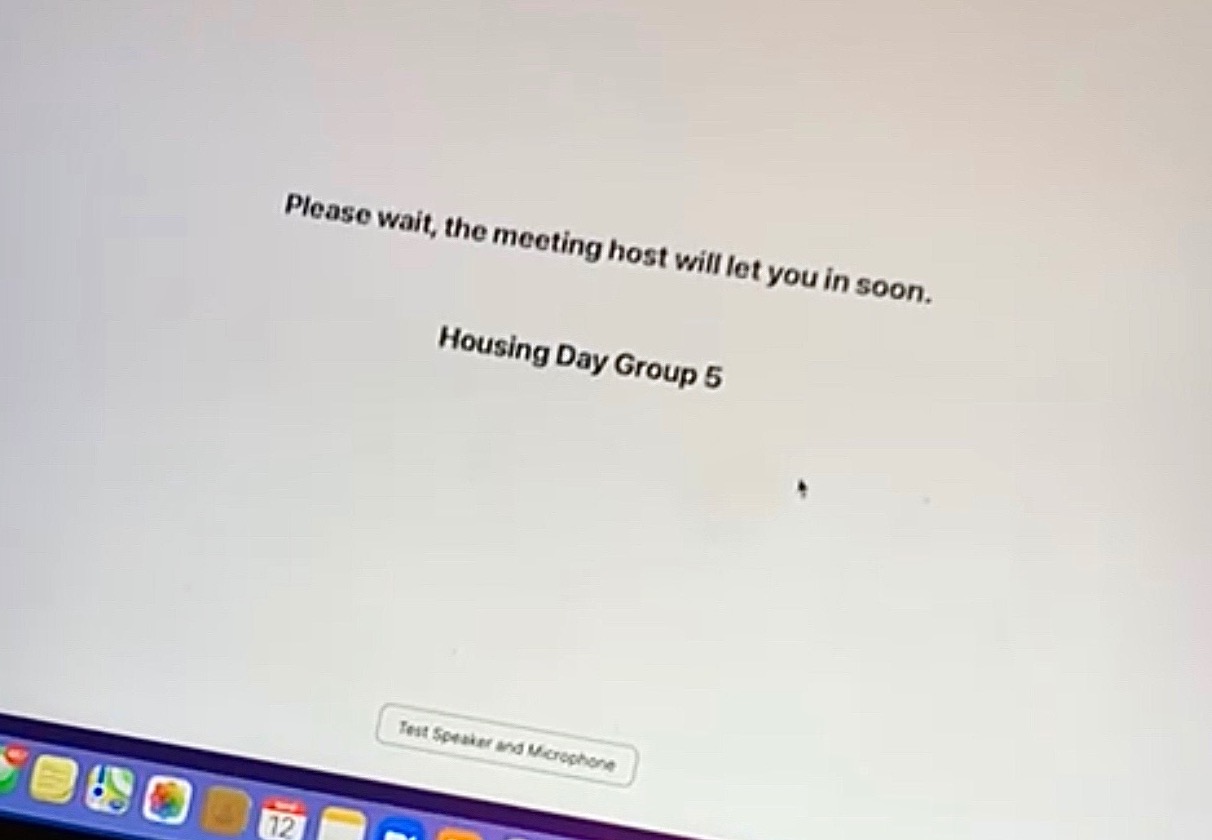 By Courtesy of Libby E. Tseng

Before the Zoom meeting opened and my upperclassmen House was revealed, my heart raced in my chest. Sharing the anxiety, suspense, and exhilaration of the virtual rendition of Housing Day with hundreds of freshmen made me all the more excited to eventually explore the Harvard campus and community in person. 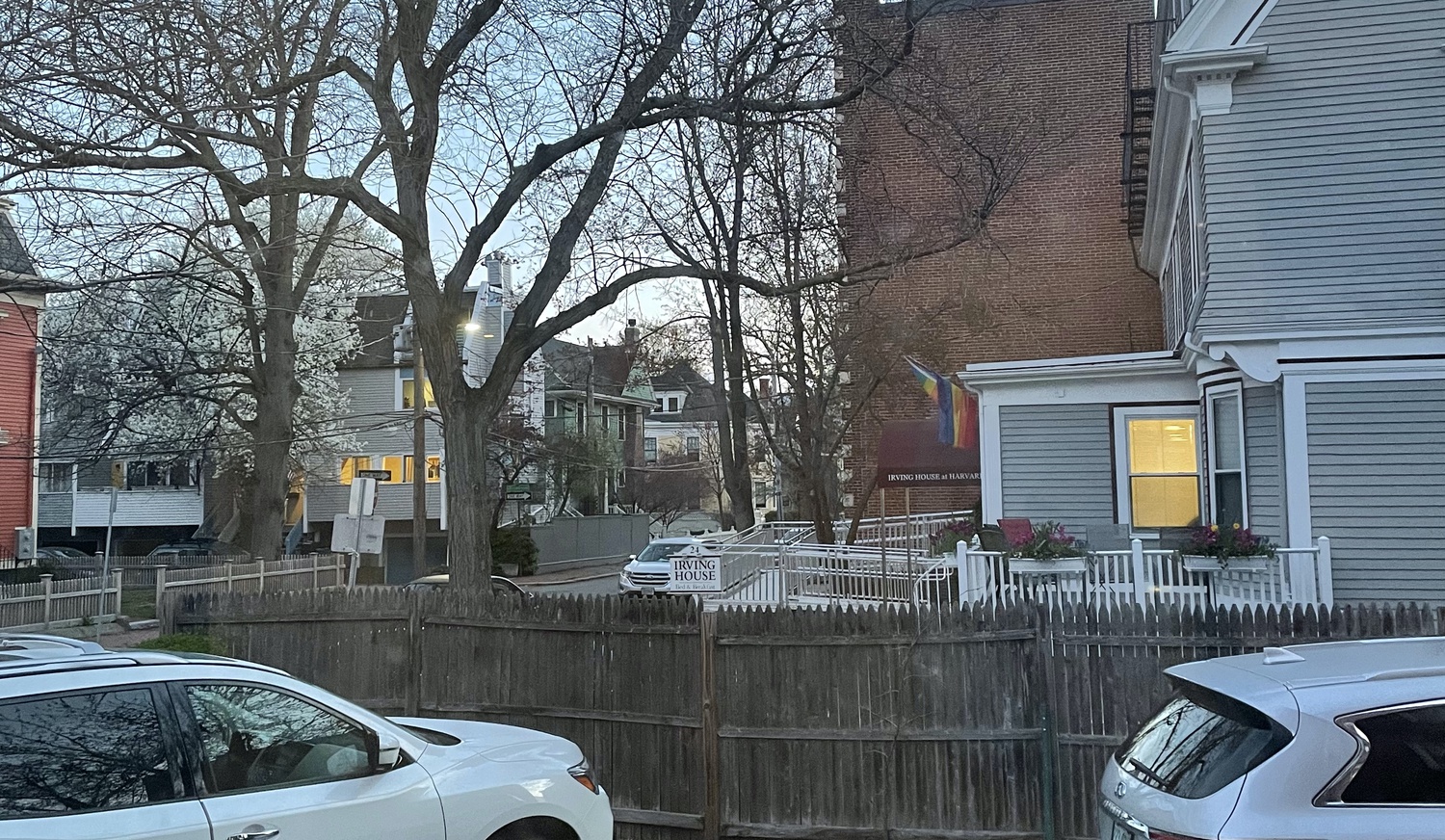 By Courtesy of Christina M. Xiao

I took this photo out the back door window of our ridiculous 17-person house in Cambridge at 5:47 a.m. after staying up the entire night with a housemate, tier-listing the top 20 most influential philosophers to avoid thinking about our feelings. I miss that house even though it ruined my sleep schedule. 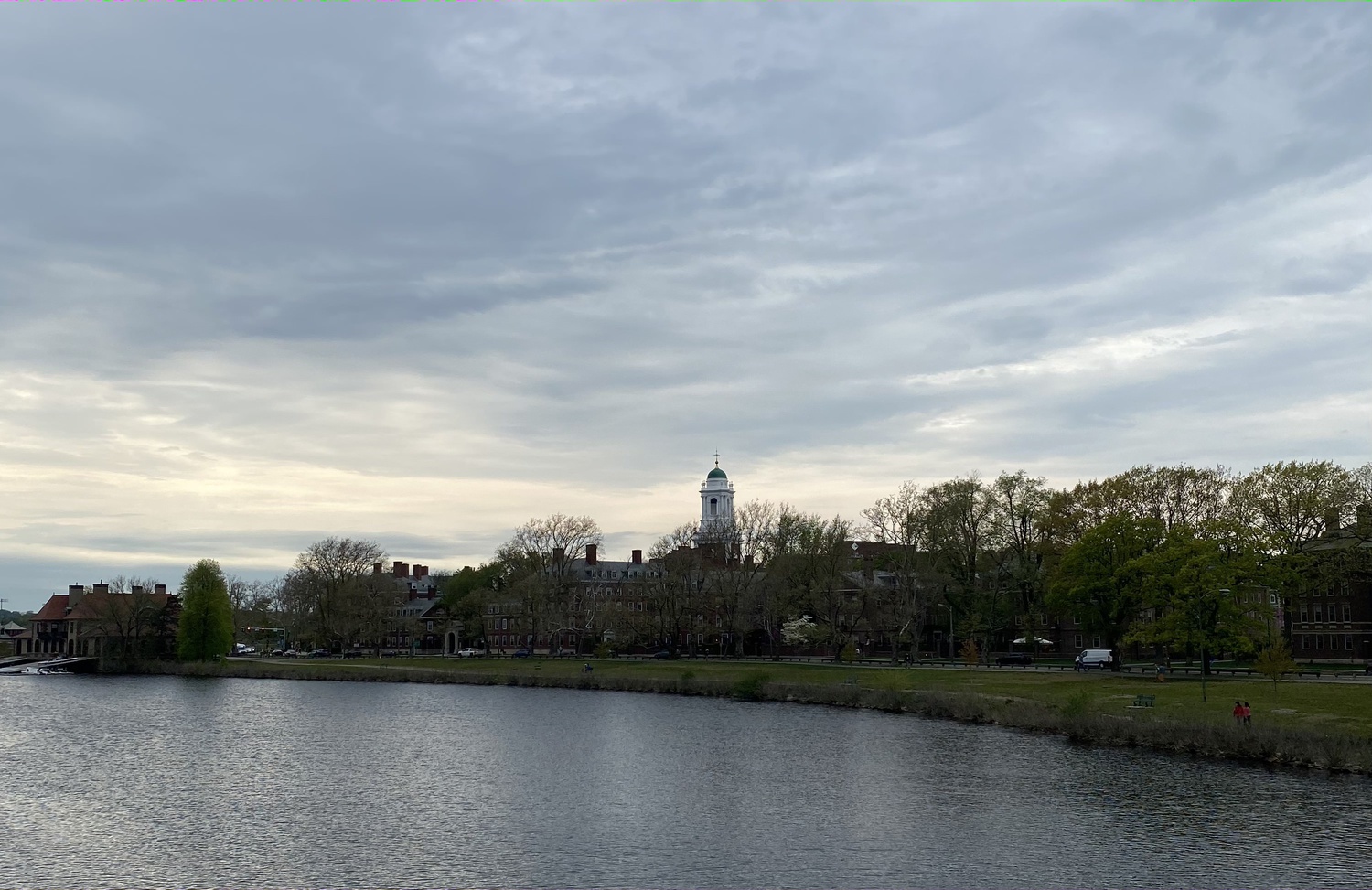 By Courtesy of Ebony M. Smith

I took this photo on my 19th birthday, May 3. It is my first picture of Eliot House, my soon to be home for the next four years. My mom insisted that its tower was green, but I can’t accept any descriptive word other than “jade”. It’s jade, right? 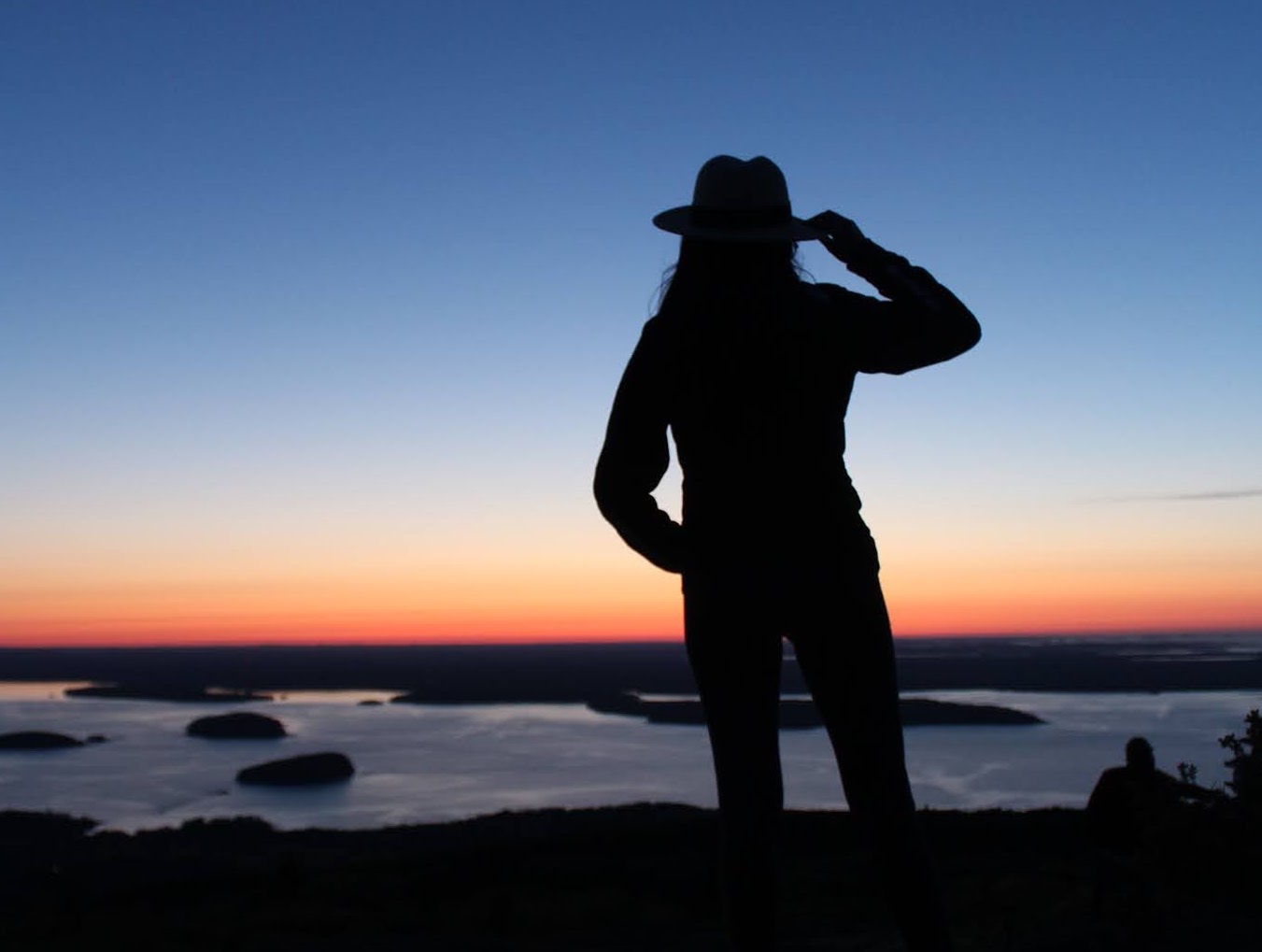 By Courtesy of Julie Heng

Acadia National Park's Cadillac Mountain witnesses one of the first sunrises in the continental US. We hiked up at 3:30; the dawn shattered at 5. The sky and ocean ignited golden-coral, and everyone on the summit exhaled. It’s cliché, but I think we’ve all been holding our breath for a long time.