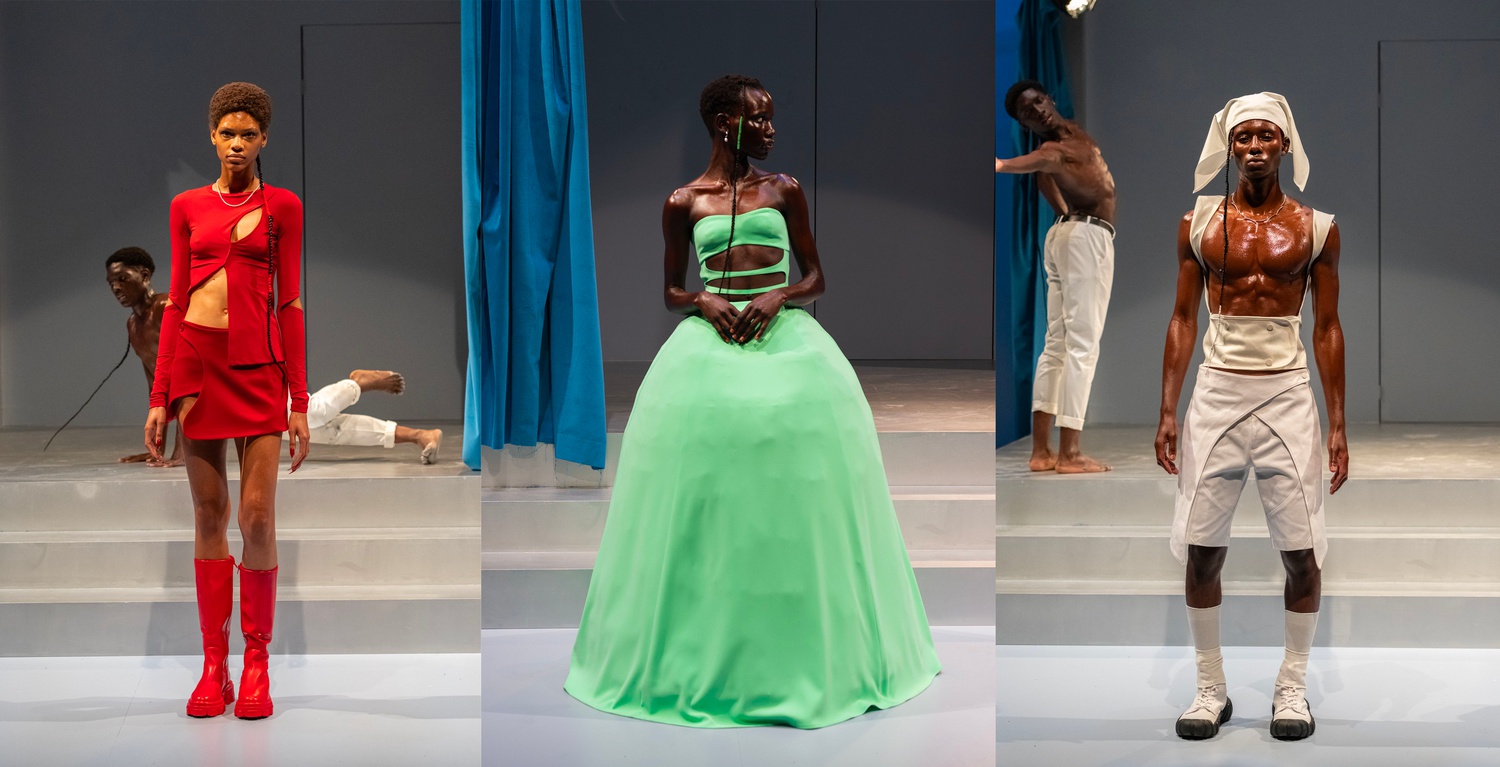 New York-based “postcolonial” fashion label Head of State showcased its Spring/Summer 2022 Ready-To-Wear collection on Sept. 10 at The Kitchen on New York Fashion Week Day 4. Titled “Homecoming,” the collection consisted of 25 looks, including Head of State’s womenswear debut. According to his thoughtful show notes, Head of State’s designer, Taofeek Abijako, drew inspiration from the Second World Black and African Festival of Arts and Culture (FESTAC ‘77). The looks were “a modern interpretation of the guests and performers who attended FESTAC ‘77,” he wrote.

Anchored by a dancer whose performance had clear contemporary and West African influences, the show developed a connection between late ‘70s silhouettes and West African street and workwear. Abijako’s eye for tailoring is most evident in his reimagining of the ‘70s flared trousers with contrast lining exposed by cutouts. When paired with a shoulder-padded blazer in bright crimson, the designs projected nobility and elegance onto the onlooker. Exaggerated collars framed the angular visage of the models who evidently symbolized the arts and culture festival’s many guests: They held a bundle of bags, the only accessories presented in the collection save for a few cloth headwraps.

The setting was intimate. Abjiako explored his family’s history in front of a limited audience, which included his father and two younger brothers, in a small theatre. The models presented the garments around a raised center stage for the singular dancer. After the initial presentation of a majority of the collection, the show transitioned to an iterated unveiling of looks from behind the curtains on the center stage. Through suspension of disbelief, one could imagine that the final models were conjured one-by-one onto the stage by the performer.

Glistening melanated skin emanated from the garments through bare abdomens, sheer tops, and slitted sleeves. The ubiquitous monochromatic colorways — in tangerine, cobalt, olive, and crimson — imparted a sense of ease while simultaneously making Abijako’s distinct layering techniques inconspicuous. Organic cuts took the form of gorgeous tulip-hemmed shift dresses that bloomed into subsequent finale gowns in pure white and green. The crinoline-based gown that closed the show was particularly flattering with its large cutouts under the chest.

Abijako has a clear talent for melding personal narratives with material study, both of which are showcased in the 2022 collection. He’s made a compelling argument for the incorporation of West African silhouettes into global luxury fashion, while preserving the authenticity of his culture with an incredible debut of womenswear for Head of State.