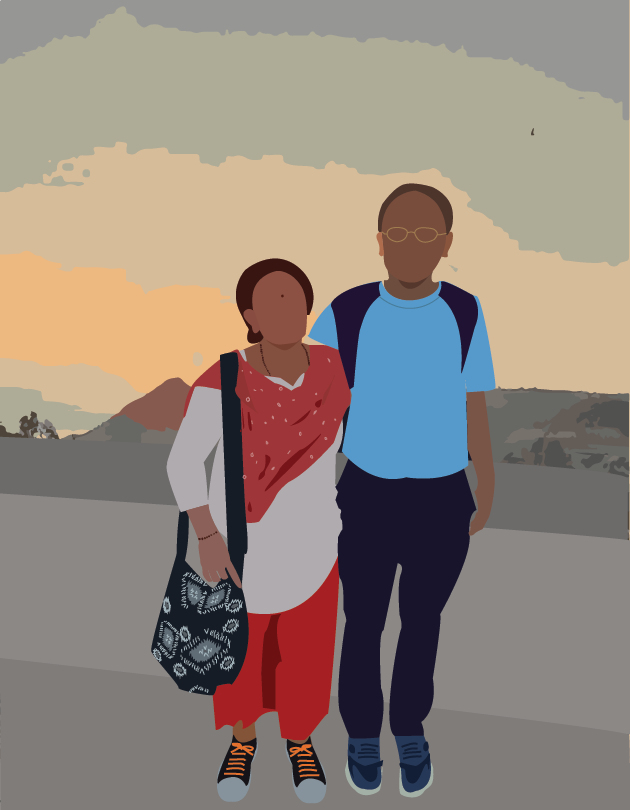 Are We Home Yet?

At the time, everyone thought the virus would pass in two months. I thought I’d get home by July 2020. It’s September 2021, and I haven’t been home for 20 months.
By Maya S. Bhagat

I finally decided to take seriously my long-held dream of becoming a teacher and spent my summer teaching middle-schoolers, 7,605 miles from home. I sat in the Zoom room with my co-teacher for lesson planning time, which inevitably devolved into a get-to-know-you time for us.

“I feel like I haven’t aged since the start of the pandemic,” he laughed. “It’s like time has stopped.” He looked up, expecting me to promptly agree.

“No, Ron, I feel like I’ve aged a few years this past year and a half.” His face fell in concern as I tried to explain myself, to put my experience into words, but they didn’t come. So much had changed. Words and tears evaded me.

When Harvard sent us home in March of 2020, abrupt decisions were made — what belongings to sell, how to spend the last five days on campus, where to use excess BoardPlus. As an international student with American citizenship, I had to make a decision about where to go. My options were to stay on campus, live with my older sister in Chicago, or to return to my home in Mumbai. Returning home didn’t make much sense in terms of finishing the semester, and it was a scary prospect to stay alone on an empty campus. I chose Chicago. At the time, everyone thought the virus would pass in two months. I thought I’d get home by July 2020.

During the first few months of the pandemic, my sister and I often stayed up late talking. It brought back fond childhood memories of whispering to one another when we stayed up past bedtime. But we were overcome with worry. Things had run out in the grocery stores, and my sister felt responsible for taking care of me. She did everything she could, cooking meals for us, giving me her bed and sleeping on the floor, and introducing me to her graduate student friends, who were also stranded in the U.S.

It was soon clear, though, that she needed parenting too. One sunny morning, Raina and I sat in her bedroom, eating steaming bowls of upma. The room was warm, the food piping hot, and if I closed my eyes, the clink of steel spoons on steel bowls and the temperature made it feel just like breakfast time at home. Raina was scrolling on her phone when she suddenly put down her food. I wouldn’t have usually noticed, since I knew she often wouldn’t finish her food, but this time I saw her eyebrows scrunch up and her chin crinkle the way it always did when she was about to cry when we were younger. She refused to tell me what was wrong, but for the first time, I made the connection that she wasn’t eating enough because of anxiety. I realized that I needed to look out for her, too.

My sister’s summer Russian classes were online, and she had graduate exams at the end of that summer. I’d never seen her so stressed. She sought my advice on her problems, which was flattering, but at times overwhelming. I felt ill-equipped to tackle the issues of someone four years older than me whom I had always seen as more mature than myself. I stepped up, carrying groceries home from the store, which was a 20-minute walk. When my feet grew sore and my back began to hurt, I’d sit down in the summer heat to catch my breath. I tried to imagine the pounding rain typical of the monsoon happening at the moment in Mumbai. But all I could hear was my mother’s voice asking me when I’d be coming home.

Soon it was August, and the time had come for me to decide whether or not to live on campus for the fall semester. I had received permission, but I chose not to go — it seemed like rules would be strict and I was still reeling from my sophomore slump. Sharing a bedroom and house keys with my sister in Chicago wasn’t ideal, but I liked my online classes and it was nice to spend time away from Cambridge. But as the days got shorter and darker and finals season approached, the stresses that I had tried to put on the back burner during the summer became impossible to ignore. Covid-19 got worse in the U.S. that winter and my mother stopped asking us when we were coming home.

By the time the spring semester rolled around, I was utterly exhausted. I felt like a side character witnessing my sister’s life, so when Harvard called juniors back to campus and two of my blockmates said they would return, I decided to as well. It was eerie to be back on an empty campus and eat meals in our common room. I also had to deal with the fallout from my last 10 months in Chicago; I had ignored my mental health to help my sister, and I had a lot of back pain from lifting groceries and attending class on Zoom. Living apart from her gave me the space to recover and focus on my own needs. We still video-chatted daily. A sense of normalcy returned as we fell into our own routines.

I’ve been at Harvard since the spring, watching all the seasons go by and the shifting tides of the pandemic in the U.S. and in India. As things got better here, they seemed to worsen at home, with vaccination availability entrenching this inequality. My sister and I finally booked tickets to go home this December. I don’t know what awaits me there — reading the Indian news became too painful many months ago, and I know my parents haven’t told my sister and me everything. But I do know that for the first time, I will be returning home, not just as the baby of the family or the younger sister, but as an adult.

— Magazine writer Maya S. Bhagat can be reached at maya.bhagat@thecrimson.com.